Why Don't We Talk About Catelyn Stark? - Nerdist

Why Don’t We Talk About Catelyn Stark?

In the moments after Sansa and Arya Stark came together to defeat Littlefinger in the seventh season of Game Of Thrones, they stood at the gates of Winterfell—their ancestral home—and reminisced about their father, Ned Stark. “I miss him,” Arya said. “Me too,” Sansa replied. It’s a beautiful scene between sisters who, until that point, found themselves mostly at odds. But there’s something about it that feels a bit off, too. Not because the girls are remembering their father, but because they don’t mention another important figure in their lives, their mother. Catelyn Stark is, after all, more directly associated with the man they just killed for destroying their family.

As Ned’s figure looms large over the series, Game of Thrones has seemingly forgotten his wife. The woman who, with her dying breath, defended her honor as a Stark at the Red Wedding. Catelyn was a flawed, often irrational, often impulsive character, but she was no less human than any of the other flawed, irrational, impulsive characters. Her only weakness was her devout love of her children, often at the expense of the “bastard” Jon Snow, or in times of war. But on a series where even our heroes can be bloodthirsty, vindictive, and cruel, Catelyn stands out as a complicated but ultimately good character, and her erasure from the show’s final seasons is indicative of its inability to understand women.

Of course, Catelyn does live on in subtle ways. Sansa, for example, has much of her mother in her. Her long, auburn hair and piercing blue eyes recall Catelyn’s physicality, but she is also the most effective counselor to the King in the North; as Catelyn watched her son, Robb, rise to the occasion, so has Sansa been there for Jon. Their mutual coronation scenes are mirrors, with Sansa filling in the Catelyn role of proud but wary adviser. Just as Catelyn stood by her son as he behaved rashly in the name of love, so Sansa stands by Jon as his infatuation with Daenerys threatens to undo the North. (Unlike Catelyn, Sansa interferes with this love in a way that might spare her Catelyn’s fate.)

Arya also carries vestiges of her mother. In the books, Catelyn returns from the grave as a vengeance-driven shell of her former self who goes by the name Lady Stoneheart. That plot was removed from the show, but Arya carries out her mother’s textual tasks, slaying the Freys whenever she can. 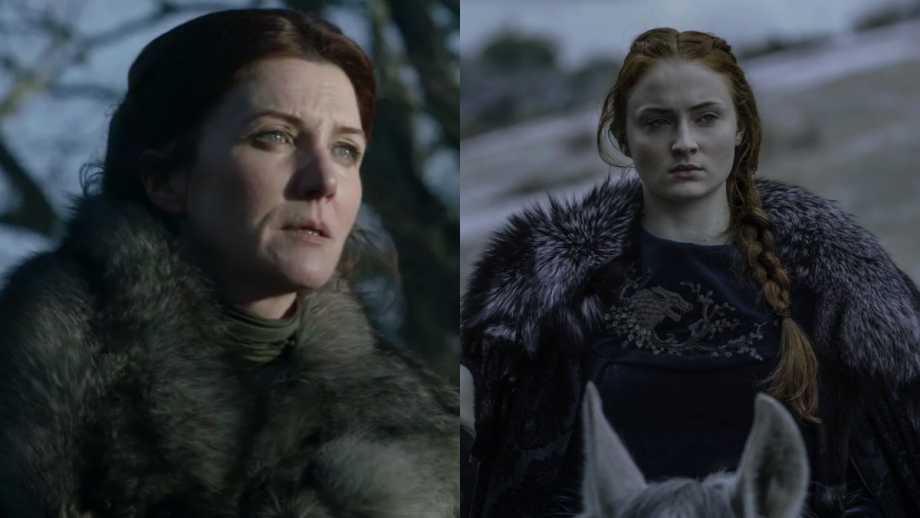 But the show barely mentions Catelyn anymore. Rarely does anyone reflect on the sacrifices she made for her family, or the ramifications of her death, especially not her children. When Jon’s true parentage was revealed, no one considers how his father set him up for a life of spite by not telling his wife the truth. No one stands before her statue in the crypts of Winterfell; we don’t even know if one was erected in her honor. In fact, the only real influence she’s had on the show since her death has been a line that crept into the teasers for this season:

“All the horror that has come to my family, all because I could not love a motherless child.”

It’s a line added to the show in season three to explain Catelyn’s disdain for Jon Snow, whom she—reasonably, in the context of the world George R.R. Martin established—feared. He was a threat to her true-born children’s status and a symbol of her husband’s infidelity, a disgraceful thing in the honorable North. The show’s decision to add this scene, as a way to “soften” Catelyn while blaming her for the horrors to come, is indicative of the show’s lazy female characterizations.

The men get to be angry and scornful but ultimately likeable–Sandor Clegane, Jaime Lannister, Bronn, Tyrion—while the women are shoved into tropes. They’re either made more sympathetic with scenes like Catelyn’s Jon confession, or they’re punished or deemed “crazy” for their ambitions. Some consider their rapes to be character growth, and sometimes they’re uncharacteristically weepy at the drop of a hat or they’re “fridged” to motivate other character’s arcs. Minor male characters like Bronn appear out of nowhere with scenes both poignant and character-driven. Women like Yara are given excuses to inconsequentially disappear forever. Once you start paying attention, it’s clear what gender this story is servicing, despite tricks like Arya’s badassery that drop in now and then to make you think otherwise.

This is largely a result the all-male writing room, and it’s a shame that the season is shaking out in a way that paints the women in broad-stroke tropes: crazy, badass, heartbroken. That’s not how this show started, and Catelyn was one fine example of that; she was an imperfect, layered, occasionally distrustful, but generally well-meaning character. Her shades of grey made Thrones better. It’s a pity the creators—and by proxy the characters—have all but forgotten her.