Call of Cthulhu Now a Seuss Book and It's Terrifying - Nerdist

Call of Cthulhu Now a Seuss Book and It’s Terrifying 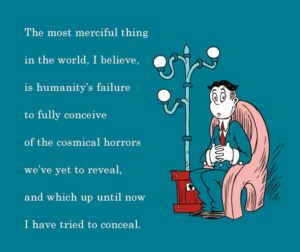 I cannot believe I am going to write this next sentence.

If you are a Lovecraft fan, The Call of Cthulhu for Beginning Readers is a must-have volume because it is may be the best adaptation of a Lovecraft story into another medium. (Tied with the HP Lovecraft Historical Society’s adaptation of The Call of Cthulhu as a silent film.) The book takes HP Lovecraft’s iconic story of a rubbery horror awakening in the South Pacific and asks, “What would that story have been like if Dr. Seuss wrote it instead?”

I know, I know. That sounds mad. How can a stunt book be a great Lovecraft adaptation? First, forget what you think you know about this volume. It is not some joke gag where we all laugh at the goofiness of Cthulhu being drawn in a Seussian style.

This book does not make Lovecraft funny. Rather, it makes Seuss scary.

It is difficult to describe the aesthetic experience of reading TCoCfBR aloud. The Seussian rhythms of the poetry speak directly to the lizard part of our brains. We’ve been hearing the poetry of Dr. Seuss since we were first read The Cat in the Hat, and we hear it again in persistent Christmas rewatchings of How the Grinch Stole Christmas. The pairing of those rhythms with Lovecraft is nothing less than shocking.

Effort has been made to keep to Seuss’s style while also telling Lovecraft’s tale of cosmic horror. Consider the following lines:

The most merciful thing

in the world, I believe,

is humanity’s failrue to fully conceive

of the cosmical horrors we’ve yet to reveal,

and which up until now I have tried to conceal.

When my great-uncle died,

I uncovered the research he wanted to hide.

The author pairs the opening of Lovecraft’s Call of Cthulhu, which may be the most famous sentence he ever wrote (“The most merciful thing in the world, I think, is the inability of the human mind to correlate all its contents.”) and seamlessly and gracefully translates it into anapaestic tetrameter. This work is what Seuss would have written, executed with effort and precision, if he had wanted to translate HP Lovecraft into his own body of work.

In an interview with Geek & Sundry, genius poet-artist RJ Ivankovic said getting the poetry right was an endless task;

“For weeks (months? years?) I spent just about every waking moment running variations of anapaestic tetrameter through my head trying to get the story to fit: driving to and from work, in the shower, watching television, lying in bed, whenever, wherever. Random bits of paper and post-it notes with fragments of a line, or a few scribbled words are still turning up every now and then in drawers all over the house.”

For Ivankovic, the pairing of Lovecraft and Seuss is more than “simple synchronicity.” Rather, Ivankovic suggests Lovecraft and Seuss walked similar paths, though they reached different destinations. He points out they were born a mere 14 years apart, and both were influenced by 20th century art movements such as post-impressionism and surrealism, though they worked to different ends.

Click here to pick up a copy of The Call of Cthulhu for Beginning Readers today!

Chaosium, the publishers of The Call of Cthulhu for Beginning Readers would also like to point out that their work uses no characters, settings, or plots from any Dr. Seuss books. Chaosium Vice-President Michael O’Brien said:

Regarding the headline “Call of Cthulhu is Now a Dr Suess book”. We just want to make very clear H.P. Lovecraft’s The Call of Cthulhu for Beginning Readers is NOT a derivative “Dr. Seuss book” repackaged with Mythos themes—this is H. P. Lovecraft’s classic short story “The Call of Cthulhu” reimagined as a children’s book. It contains entirely original art (obviously influenced by Theodor Giesel’s style but not derivative of any Giesel piece), and is Lovecraft’s original 1928 story seamlessly and gracefullyetold in anapestic tetrameter by “genius poet-artist” RJ Ivankovic.

Do you have fond memories of childhood that have grown horrible with age? Share them below!