Build a Galaxy From Nothing in Planetarium - Nerdist

Build a Galaxy From Nothing in Planetarium

When you take the scope of forging a solar system out of nothing and compact it down to a 40 minute board game, you will face many challenges. Planetarium overcomes by starting with a wide lens and narrowing the field to the most fundamental of concepts. It asks you to commit to the creation and destruction of terrestrial bodies of significant magnitude. It’s a design that engages the cerebral cortex whether you’re blaring The Beastie Boys or Johann Strauss II in the background.

Planetarium is clever. That wit is most apparent in its direct and simple mechanical base. You alternate turns, moving either matter or planet tokens around orbital paths in this dawning intergalactic environment. The most prominent tracks form concentric rings spanning out from the star in the center of the galaxy. You will move the tokens a single space along these orbitals or diagonally across a connected pathway to an adjacent ring. If a matter token and a planet collide then you take the resource and place it on your personal player mat in a space designated for the specific planet.

The game continues in this way, players swirling matter and mass about the system resulting in impact. The idea is to spend those collected resources to meet the requirement of evolution cards in your hand. You will play these cards on specific planets and expend the listed resources. This will afford victory points and empower radical shifts in the planet’s ecology.

That’s pretty much it, at least at a surface level. The amount of nuance, however, is significant in ratio to the short time commitment. Evolution cards are broken into three groups that are delineated by the difficulty of achieving requirements. Low cards can be met sometimes immediately, where High will require some strategic building with directed action. Final Evolution cards are long term goals and may only be played on the very last turn of the game.

There’s an interesting tempo allocation placed upon the players to determine when to start hoarding those Final Evolution cards. You can take them as early as turn one, but they will clog your limited hand and hamper your progress. This mimics the engine manipulation of Dominion where you need to decide when to cut over to victory points. The radical shift here is that those Final Evolutions contain requirements that you need to work towards in advance. Draw them too late and you won’t have the action capital remtokens on the board and gumming up the works. It’s a constant joust for control and you need to find the paths of l

aning to accomplish them. Draw them too early and you’ll stall during mid-game point accrual.

Planetarium succeeds due to its depth and ability to make players feel clever. That second aspect is exemplified in the struggle to build order out of chaos. While matter is fast and loose early in the solar system’s life, resources become scarcer as the zenith nears. This narrowing of options combines with your opponent sticking their dirty thumb behind the player’s actions.

That personality of grappling with elements outside your control to establish order walks hand in hand with the greater themes at play. The game never takes a stance on providing context for the impetus advocate of fate. It leaves the subject open to interpretation, but it places you in a head-space that allows that deeper contemplation to breathe and exist.

The accomplishment of presenting a “super filler” 40 minute design with strategic depth, beautiful presentation, and broad contemplative interpretation is pretty significant. The only qualities of the game which can grate on the nerves are the blocking of your progress due to unforeseen enemy actions. Usually you can shift and adapt, but a player moving a planet from the third orbital ring to the fourth and causing you to miss a Final Evolution card-that can sting. You have to occasionally roll with those punches and it’s easier to swallow with an abbreviated playtime. The game can also slow to a crawl with participants who want to over analyze and contemplate every possible move. The general bounty of resources and beneficial plays tends to soften this somewhat. 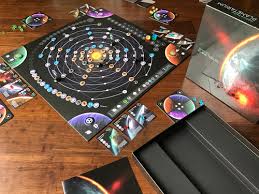 It’s worth noting that Planetarium is solid with all player counts. As a two player affair, that element of chaos is more restrained while you possess more agency on the board. For this reason, I slightly prefer the three and four player setup which feels more thrilling and unpredictable. At two, it does still manage to provide difficult choices and present strategic challenges.

The solo experience is an interesting one. This supported mode of play has you fighting the board which moves about on its own, simulating that chaos factor. It appears easy at first, but achieving successively higher scores is actually difficult. You will top out and need to shift your thinking and develop your skill. If solitaire is the primary option for play this one is a likely pass as the long-term payoff and variety isn’t quite there, but it does offer a compelling diversion from time to time. The solo mode is more of a value-add than a game changer.

In its entirety, Planetarium is an achievement. It takes scientific concepts and displays a knack for capturing physics with elegance. You’ll kick up dust in an infant galaxy and watch the narrative of four planets take shape before your eyes. In those stories, you’re not Matt Damon struggling to survive or Matthew McConaughey. No, here you’re the author, director, and composer of something greater than your own existence.

Have you played Planetarium? Let us know in the comments!