Born from the Ashes of the Old World: Age of Sigmar's Evolving Lore - Nerdist

Born from the Ashes of the Old World: Age of Sigmar’s Evolving Lore

Games Workshop recently announced a new edition of Age of Sigmar, with a release date sometime in June. The initial release of the game three years ago marked a massive shift in how the company did things: a brand new world, the death of its most venerable property (Warhammer Fantasy Battle), and a shift in how game rules are presented. It didn’t sit that well with a lot of people at the outset, including me.

Fortunately, I love being wrong. Over its lifespan, and culminating in the new edition, Age of Sigmar has tuned its presentation, rules, and approach to become at least as exciting as the more popular Warhammer 40,000. As the second edition approaches, let’s take a look at the lore of the Mortal Realms.

The End Times and The Birth of the Mortal Realms

When Games Workshop decided to end Warhammer Fantasy Battle, they salted the earth where it stood. Towards the end of the final edition of the game, they presented a massive event called The End Times. Presented through big, fat new rulebooks and novels, The End Times marked when all the prophecies came home to roost. Chaos was triumphant. Nagash, the lord of the undead, returned. Long-standing lore characters died or were changed forever. Humanity was decimated and the entire Warhammer World was sucked into the warp. 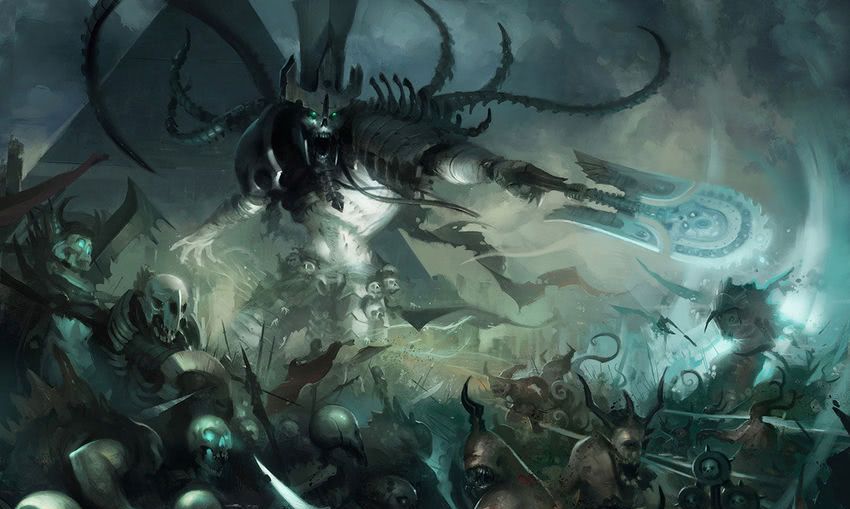 That was it. The Warhammer World, all nearly 40 years of it, was gone. Replacing it was a nearly diametrically opposed idea of what fantasy worldbuilding is supposed to look like. The Warhammer World was a warped mirror of our own 16th century; Warhammer Fantasy Roleplay famously centered the starting character experience on being ratcatchers and charlatans. The Mortal Realms, as Age of Sigmar’s universe is known, is loud, high fantasy, a world of battling gods and explosive magic. The shift was massive.

The animating idea of the Mortal Realms is that Sigmar, supreme god of the Empire, salvaged part of the remnants of the Warhammer World by holding onto its molten core as it was dragged down into the realms of Chaos. Through a supreme effort of will, he turned the eight Winds of Magic (think magical “flavors”, like fire magic, shadow magic, etc.) into fully fledged  pocket realms all their own, each dominated by the type of magic it was formed of. So, for instance, there is Shyish, the realm of death magic, where gloom and decay hold sway, while in Ghyran, the realm of life, all is a verdantly fecund explosion of… well, life.

Linking the realms are supernatural doorways, called Realmgates. These portals become objects of power, jealously guarded by those who control them, because they represent the only reliable way to move between realms. Chaos is held in only temporary abeyance in the Mortal Realms; they’re always trying to find a way to take the whole thing over again. Sigmar, who molds souls into einherjar-like warriors called the Stormcast, tries to fend them off. All the while, the forces of Death (led by a resurgent Nagash) and Destruction (orcs, ogres, and all the rest) jostle for their own ideas of domination.

I’d be a liar if I said I read all the Age of Sigmar novels—and there are a fair number of them by now—which get into the minutiae of this stuff. I’m a weirdo non-fiction guy who prefers to get his fiction fix through games, movies, and all the other non-book stuff. As it turns out, that’s part of why I enjoy miniatures gaming so much: I can see the story miniatures, terrain, and table design tell me about a setting.

This is where Age of Sigmar has really grown up over the past three years. Initially, the focus was on porting over existing Warhammer factions to the new game. That wasn’t by any means bad, but it did lead to a slight mismatched feeling in terms of tone and motif. Age of Sigmar is, after all, the highest of high fantasy, so the peasant ratcatchers of yore didn’t fit neatly into the visual style coming out with the Stormcast or huge orcs (sorry, I can’t bring myself to call them orruks, in the new parlance) riding dragons with giant fists. 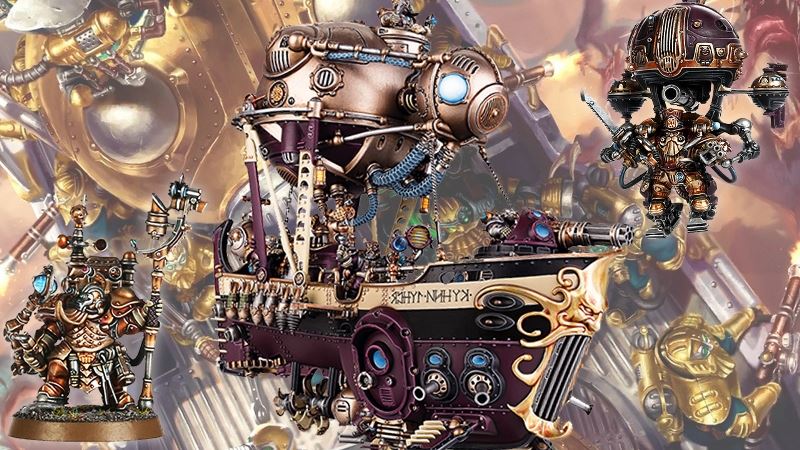 As the game matured, however, new armies were released. There are the Kharadron Overlords, sky-sailing dwarves who mine the skies for magical gold. The iconic witch elves got their own army which includes snake-bodied medusa elves clad in bronze armor. The forces of Nurgle came into their own with a mega-release. The Stormcast have continued to evolve. There are now undersea elves who bring the ocean with them as they raid coastal settlements for souls to sustain them.

Each of these factions are undeniably cool when you see them arrayed on the tabletop, and they bring the game’s lore forcefully home: this is a strange place, one which is vast and nearly limitless in the oddities it reveals to you. Which is precisely as it should be, because the Mortal Realms are terrifying and huge. Games Workshop shows you this with Age of Sigmar, not merely tells you.

The mismatch wasn’t just visual. When Age of Sigmar first came out, it was so tightly focused on the strange and powerful that a very important piece of believability was left out. There were no normal people for comparison. Scant mention was made in the gamebooks about what the average person did or looked like. What is power if everyone is powerful? What do you fight for? 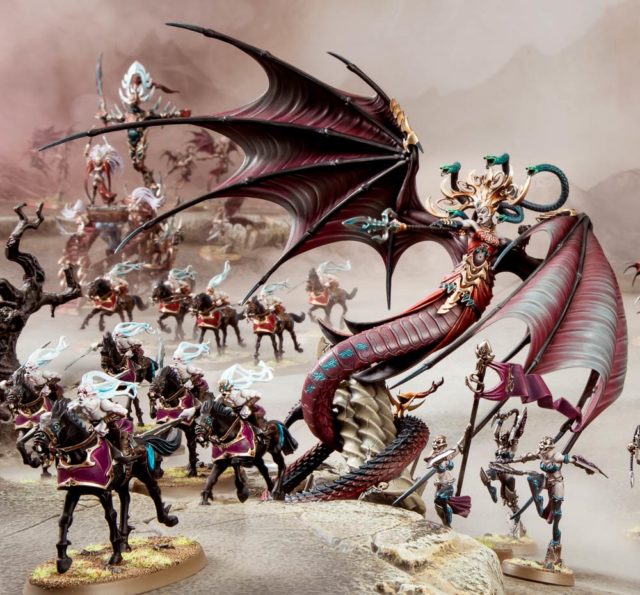 Don’t misread me. There is something cool about the stories which first came out, of Sigmar making temporary alliances with Nagash and Gorkamorka to fight back the forces of Chaos, of the quest for his hammer, and of the consolidation of his power against the dark forces of evil.

In the run-up to the second edition, we’ve seen the game’s lore slowly incorporate more of what it’s like to just be in the Mortal Realms. This reached a climax in the recently released  Malign Portents, which accompanied a global campaign over the winter. The book does a marvelous job of describing what it’s like to actually live in a place where the gods walk among mortals and there’s no conception of “normal”.

The net effect is that, after three years of worldbuilding and honing their craft, the writers and designers on Age of Sigmar have created something which has started to feel a bit like Planescape, one of the greatest of all Dungeons & Dragons campaign settings. That’s another weird/high fantasy setting, placed in the Outer Planes of D&D‘s cosmology. While Age of Sigmar doesn’t feel imitative, the net effect of both is similar: a sense of wonder and possibility, with a lingering question of just what constitutes normal in a decidedly abnormal cosmos.

As Age of Sigmar has mapped and codified its world, it’s allowed it to breathe and pulsate with strange life. It’s a good, cool world which has become my main wargame, something which is both surprising and elating. There’s much more to come which, if past is prelude, should make Age of Sigmar even better.

What Age of Sigmar lore do you enjoy most? Tell us below in the comments!