Graduation is, in a way, like a breakup. Not just with the relationships in your life, but with the part of you still tethered to the comforts of youth: when your days are carefully regulated, your social hierarchy established, and every room of your life familiar.

Most high school movies forgo this tragic element, implying that maybe our high school relationships are forever. Olivia Wilde’s directorial debut Booksmart knows they aren’t, and that’s part of its sad, strange beauty. It’s about those last moments before life changes irrevocably, when everything is louder, brighter, and faster, and when the love for that routine starts seeping out of your heart by the bucketload.

Beanie Feldstein and Kaitlyn Dever star as Molly and Amy, high school best friends and overachievers hellbent on excelling in the powerful feminist careers they spent their youth conceiving. This mentality has given them a superiority complex at their Los Angeles high school, where they’re better friends with their principal (Jason Sudeikis) and English teacher (Jessica Williams) than they are with their peers. This is all cool and fine by them, until a confrontation with a trio of popular kids sends a shock to Molly’s system: Most of her grade also got into the same Ivy League schools and Amy did, and they did it without rigorous devotion. “It’s not that we don’t care about school, we just don’t only care about school,” says Molly’s bully, Triple A (Molly Gordon), lovingly named after her penchant for, uh, roadside assistance.

Knowing now that they wasted their glory days, Molly hatches a plan make up for lost time. They’ll attend the party of Nick (Mason Gooding), her popular crush, and get drunk and rowdy with their classmates the day before graduation. Unfortunately, their isolated years mean they don’t know Nick’s address, and there the film’s Odyssey-esque plot is hatched. Set almost entirely in this one night, Booksmart tracks the girls’ hijinks-fueled journey to the party that might save their reputations or destroy their friendship forever.

The plot may sound like rudimentary teen movie fare, but its execution is where its genius comes through. Wilde has a magnetic eye for the frenzy of adolescent girlhood, nailing the perfect pitch of heightened emotion and calamity that comes with it. Along with screenwriter Katie Silberman, she also breathes new life into old tropes; Amy, for instance, is an out lesbian who crushes on her androgynous female classmate Ryan (Victoria Ruesga) and later gets one of the only queer sex scenes that springs to mind in a mainstream teen comedy. Her friendship with Molly is also so refreshingly positive, it almost feels fake—not due to lack of truth, but to lack of representation. It’s not often that teen movies feature two girls fighting about how wonderful the other one is, or using “Malala” as a code word to show support. Booksmart is peppered with lovely touches like that, making these characters feel lived-in and insanely lovable. 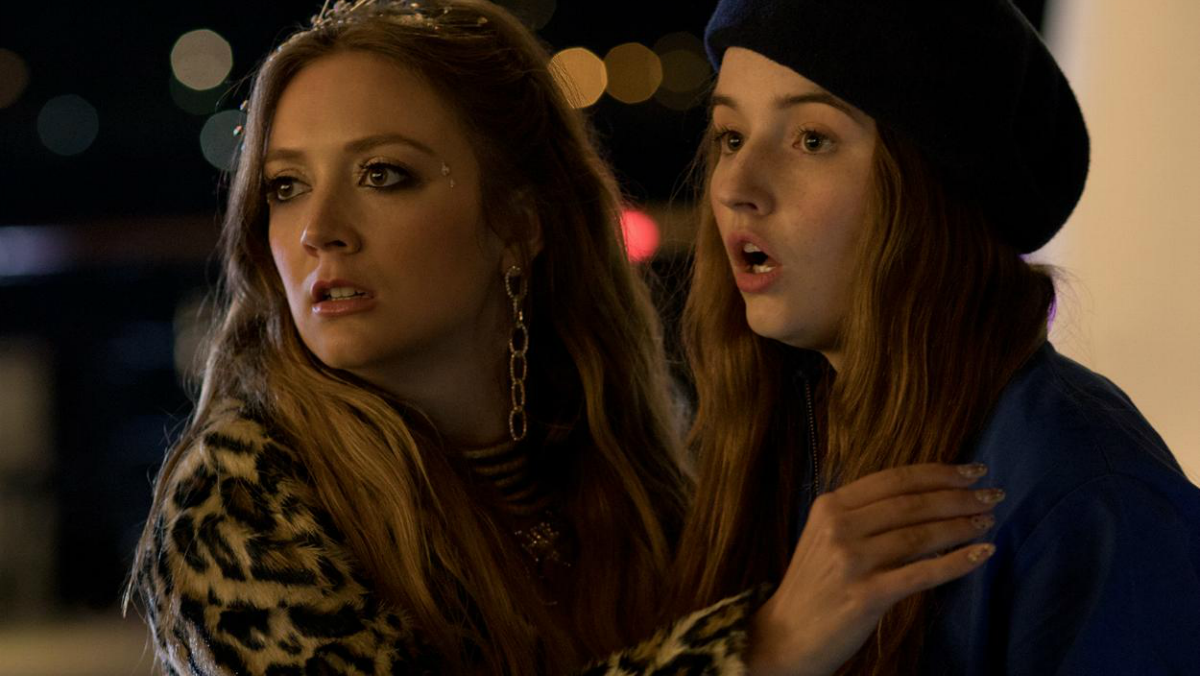 We also have the incredible cast to thank for that. Feldstein and Dever are just spectacular here, with chemistry that is instantly infectious. Feldstein’s Leslie Knope prototype Molly is boldly confident and feminist, but occasionally blind to her controlling ways; after Lady Bird, Feldstein is the reigning queen of modern high school classics. Dever is also insanely excellent as Amy. As the more uptight of the two friends, she funnels her awkward intensity into a brave performance that is the film’s true heart and soul.

The other dozen or so young actors playing their classmates bring their own unique energy to the screen, brightest among them being Billie Lourd as Gigi, a manic party girl who leaps into the frame unexpectedly with a mane of wild hair and a face of glitter, Molly and Amy’s witchy compass and possible guardian angel. Santa Clarita Diet‘s Skyler Gisondo also excels as Gigi’s best friend Jared, a boy as desperate to be cool as Molly is desperate to be important.

All of these kids are hilarious, but there’s an undercurrent of melancholy that slithers through their individual stories. That’s what keeps even the raucous, raunchy bits from ever feeling too much. At the end of it all, Booksmart is a celebration of the uncool kids who never get to be the heroes in movies like this. The girls who write letters to senators, the boys who want to build airplanes, the kids who throw murder mystery parties in lieu of standard graduation celebrations. They’re the kids who will change the world someday, and witnessing them just before that transitional moment is the great magic of Booksmart.

After film’s wildly energetic debut at the SXSW Film Festival in Austin, Wilde told the crowd her intent was to create a high school film like the ones she grew up watching and re-watching in the ’80s and ’90s; movies like John Hughes’ The Breakfast Club and Amy Heckerling’s Clueless. She didn’t just succeed in that respect – she may have also bested them. Booksmart is destined to live on as one of the all-time great high school movies, a perfect reflection of its moment, a tender portrait of female friendship on the verge of evolution, and a movie that isn’t steeped in superficiality, but rebels against it with anarchist delight. High school friendships may not last forever, but Booksmart will.