The DCEU is expanding further, as The Wrap is reporting that longtime DC Comics hero Blue Beetle is in development at Warner Brothers as a film. This would be the first solo movie for aÂ Latino superhero from either DC or Marvel. Although there have been three distinct superheroes in the comics using the name Blue Beetle, this movie would be about the most recent Beetle, Mexican-American teenager Jaime Reyes.Â Mexican-born writer Gareth Dunnet-Alcocer,Â who wrote Universalâ€™s Scarface remake, will be writing the script.

Jaime was introduced in the aftermath of DC’s Infinite Crisis series in 2006, replacing the character of Ted Kord, who had been the Blue Beetle in the Justice League titles for decades before getting killed off. Jaime was a typical teenager from El Paso, Texas, who discovers a mysterious ancient scarab from an alien culture, which had belonged to the previous Blue Beetles. The scarab activated and grafted itself to the base of Jaime’s spine, giving JaimeÂ a suit of armor that encased his body and gave him enhanced strength and the ability to fly and form weapons and energy shields. 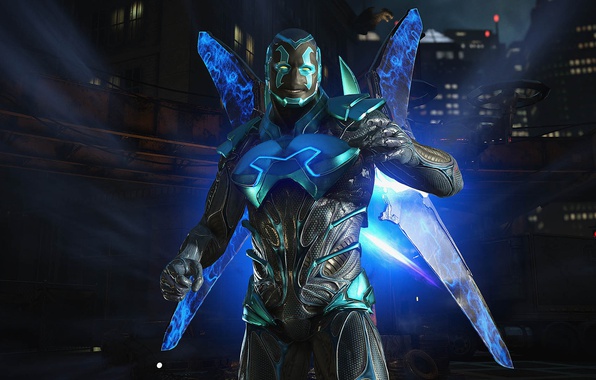 Blue Beetle has starred in several comic book series since 2006, and has become a mainstay of the DC Universe. In animated form, Jaime appeared as a member of Young Justice, and made appearances in Justice League Action and Batman: Brave and the Bold, not to mention the Injustice video game franchise. His first live-action appearance was in the later seasons of Smallville, andÂ Blue Beetle was also once developed as a television series, and a short presentation was even filmed for it, but it never made it to the full pilot stage. Hopefully this big screen version will have more luck than his television counterpart did.