Batman and Robin might get all the attention, but at DC Comics, another iconic pair of heroes are “the Dynamic Duo” for many fans. We’re talking about Blue Beetle and Booster Gold. Back in the late ’80s, the two ended up as members of the Justice League International. The comic had a comedic tone, and the Blue and Gold team constantly got into wacky adventures. Ones that usually had them bent over laughing at the end.

Now, after many decades, Beetle and Booster are getting their own comic book together at last. Dan Jurgens, the man responsible for creating Booster Gold back in the day, is at the helm. Ryan Sook ( Legion of Super-Heroes) is the series’ artist. Along with an exclusive preview of the first issue’s first five pages, we have an interview with series writer Jurgens on the iconic pair’s long history and fresh adventures. 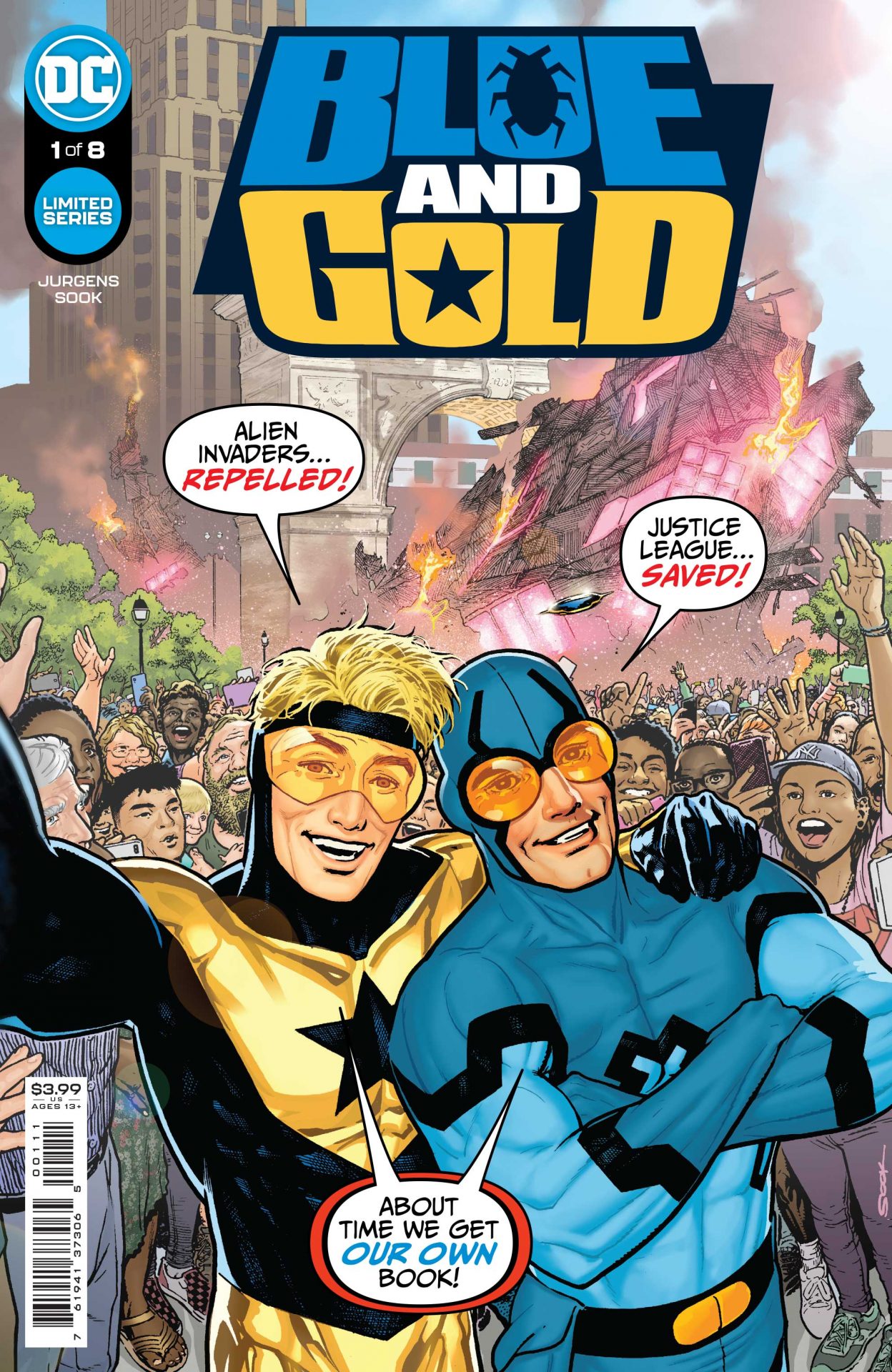 In the July-debuting eight-part limited series, Booster Gold is desperate to regain the spotlight. So he looks to attract the public’s (and Justice League’s) attention the same way any washed-up, second-rate hero would: through social media. The not-so-tech-savvy hero from the 25th century enlists the help of his best friend, Blue Beetle, who possesses both the money and the brains to help his old pal navigate the scary world of internet influencers. 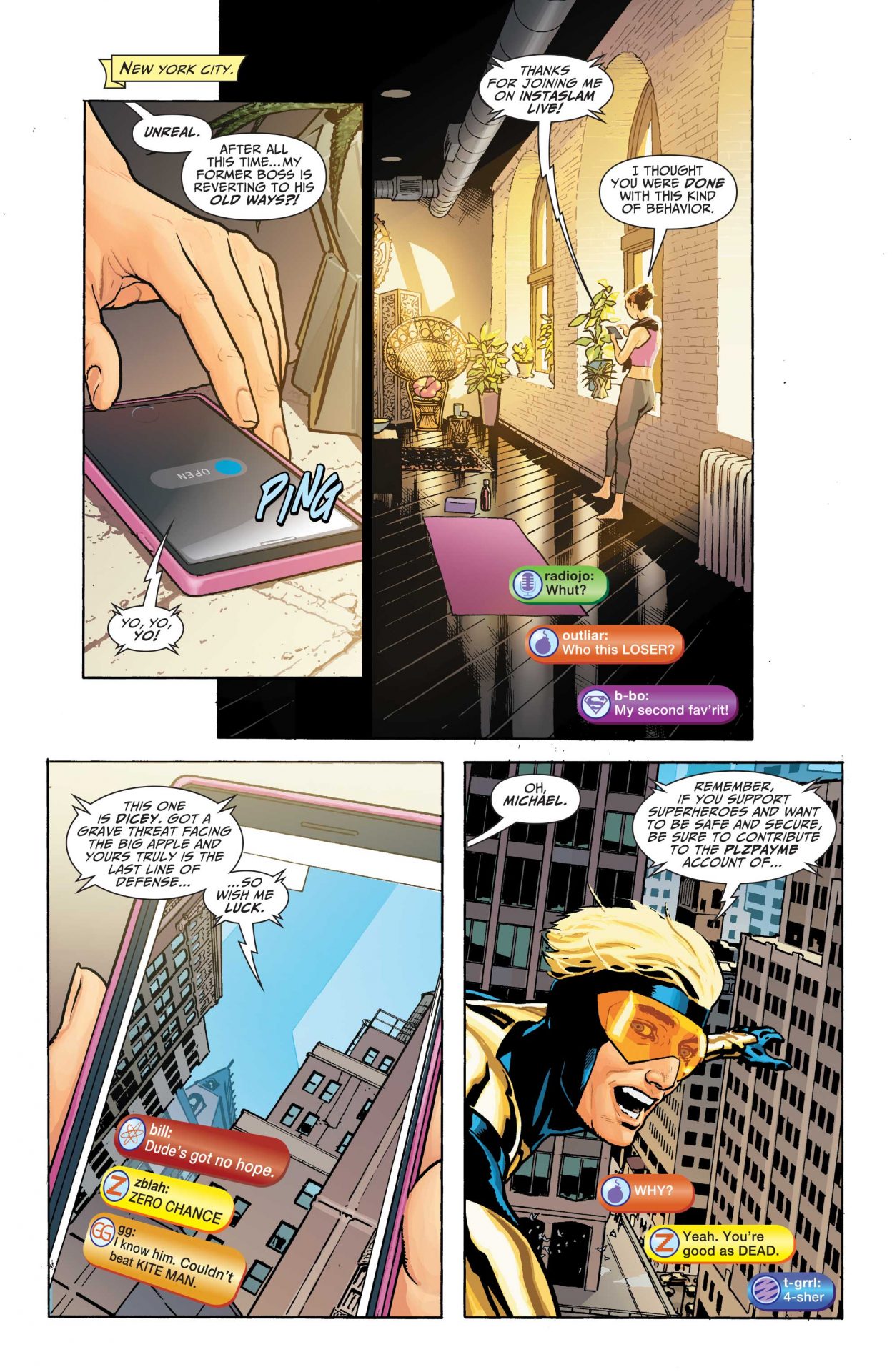 Jurgens created Booster back in 1985; he was one of the first new heroes to emerge after Crisis on Infinite Earths. Booster was Michael Carter, a loser from the 25th century, who thought he could use future technology to become a hero and a celebrity in the past. Although his first series only ran a couple of years, Booster became a mainstay of the DC Universe. So how does Jurgens feel about his creation going from “the New Kid” to a DC Comics staple? 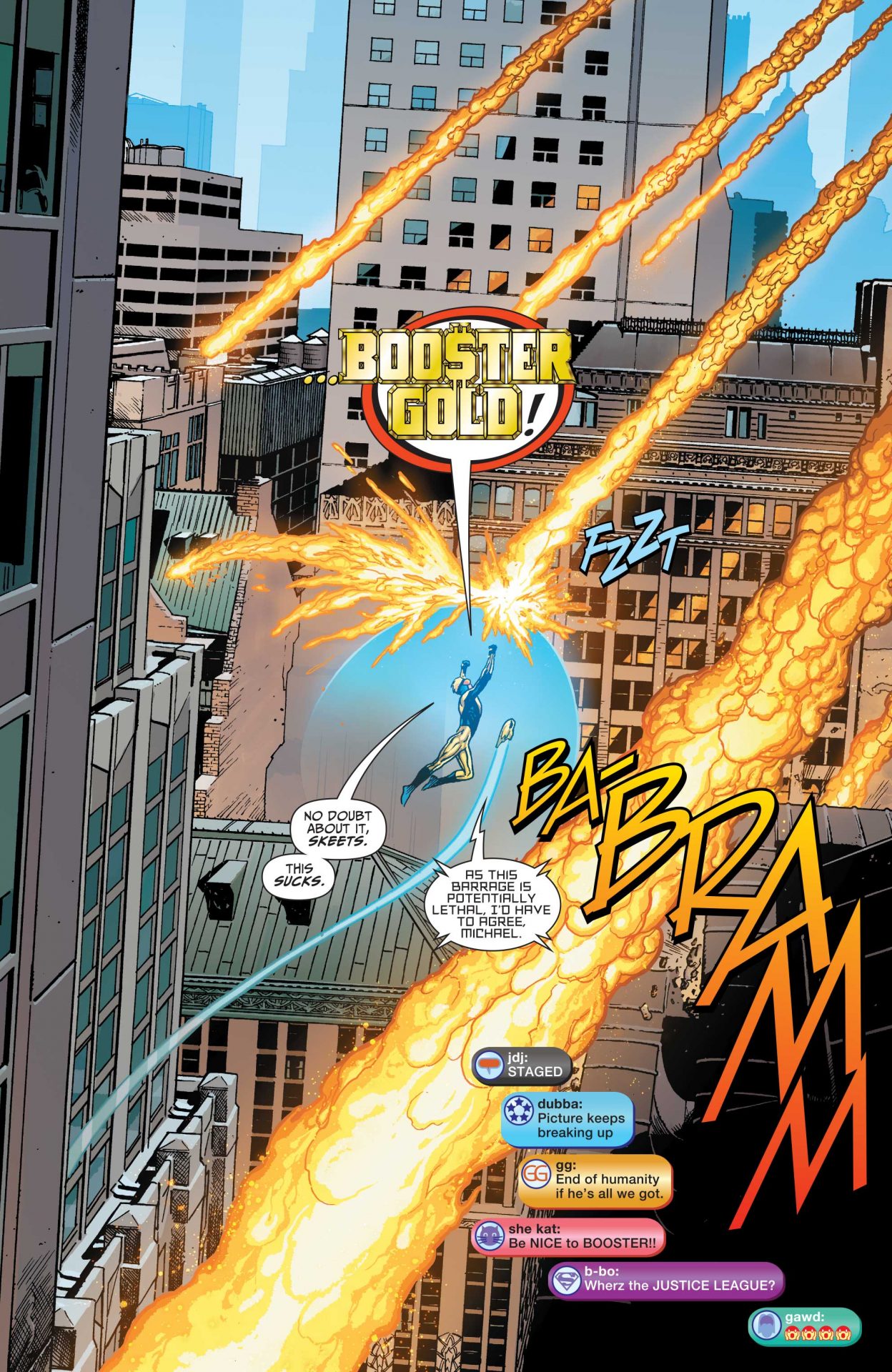 “How does it feel to have a character that has now exceeded both Superman and Batman in popularity? It feels great! Wait. You mean I’m not supposed to answer these questions like I’m Booster? Sorry,” Jurgens joked.

Yes, Booster’s maker is a big wisecracker, just like his creation. “In all honesty, it’s always nice to see that people remember Booster as fondly as they do,” Jurgens continued. “I do believe him to be a unique character in the DC pantheon of heroes and I think that helps him to stand out.” 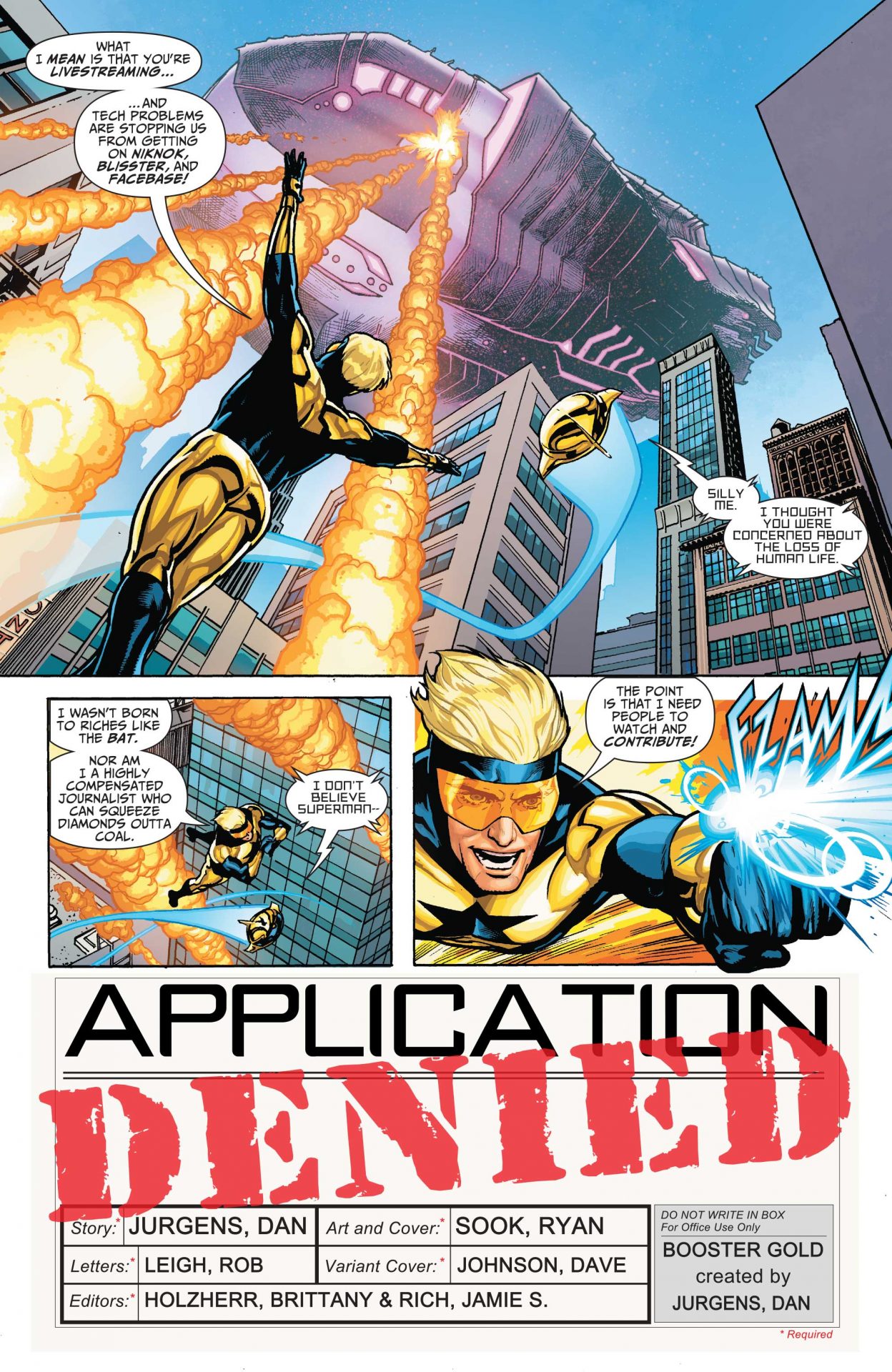 The new series seems focused on the proliferation of social media and “branding” in our modern culture. This is something ubiquitous now. But in Booster’s early years, he was doing his proto version of it as a corporate-sponsored hero. How much did years of social media influence Jurgens when writing this 2021 version of Booster?

“Quite a lot, to be honest,” Jurgens told Nerdist. “In recent years, I’ve said that Booster fits the world of today even better than he did back in 1985. The idea of an ‘influencer’ fits Booster perfectly, as do many aspects of social media. Of all the heroes out there, Booster would obviously be the one to have a PLZPAYME account so viewers could make financial contributions to him while watching as he livestreams his adventures on various platforms like NIKNOK, FACEBASE, and BLISSTER. The world of today was MADE for Booster Gold.” 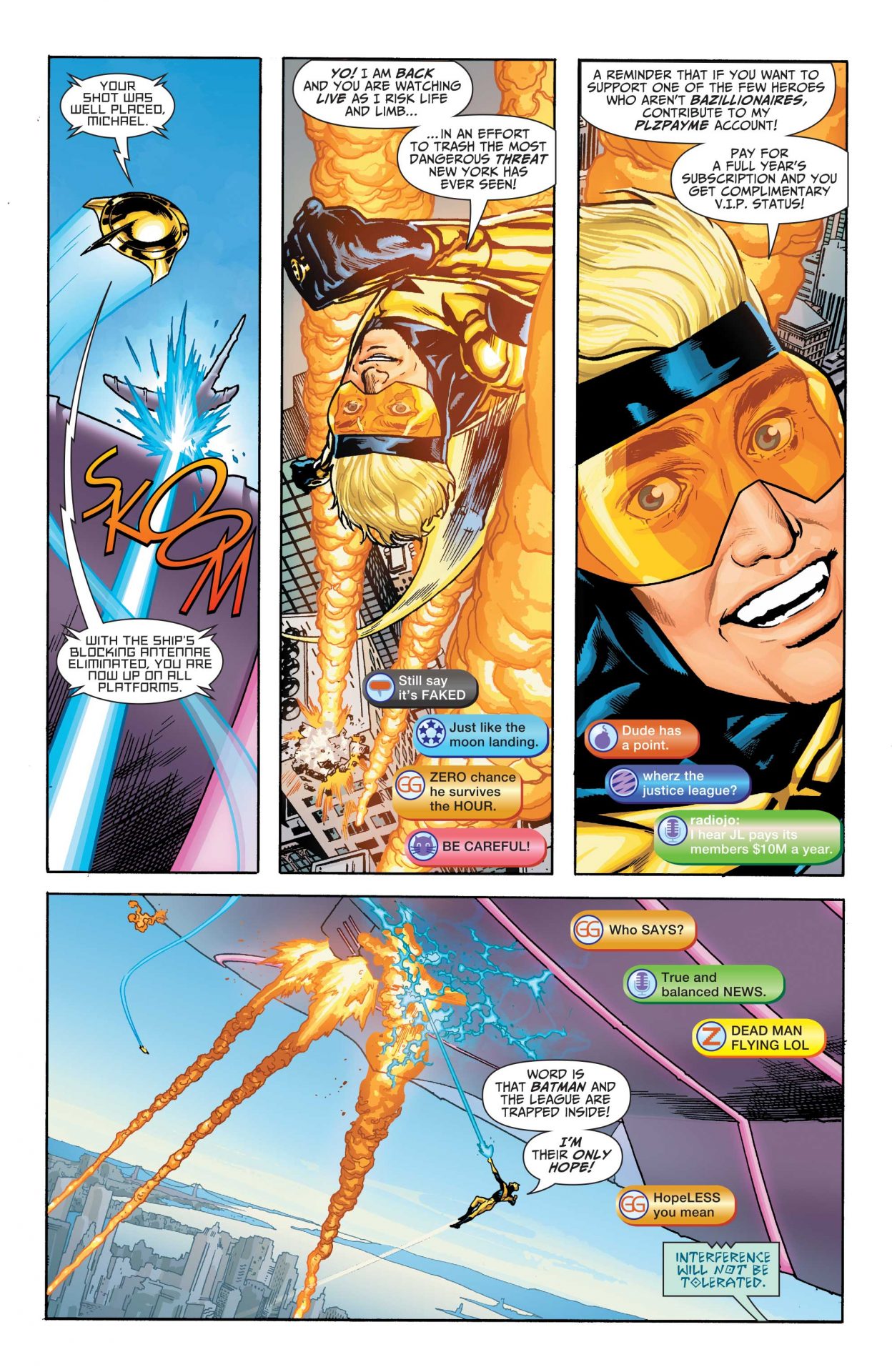 Blue Beetle and Booster Gold have had a wild ride over the past 35 years of DC continuity and reboots. Booster became the guardian of the time stream, while Maxwell Lord murdered poor Beetle (a reboot later, and he got better). But in the wake of Dark Nights: Death Metal, the heroes of the DC Universe remember all previous continuities. So will remembering all this trauma play into Blue and Gold?

Turns out, not so much. According to Jurgens, “Booster is aware of it, of course, while Ted doesn’t want to address it. He knows of it but also buries it.”

Jurgens elaborated further, saying, “From a creative standpoint, I don’t want to dwell on it. We did it in the 2007 Booster Gold series and I’m hesitant to dive into something that is now 15 plus years old. I think we’re far better off simply driving right into current stories. That’s what seems most fair to readers, as anything else ends up with multiple pages of explanation.” 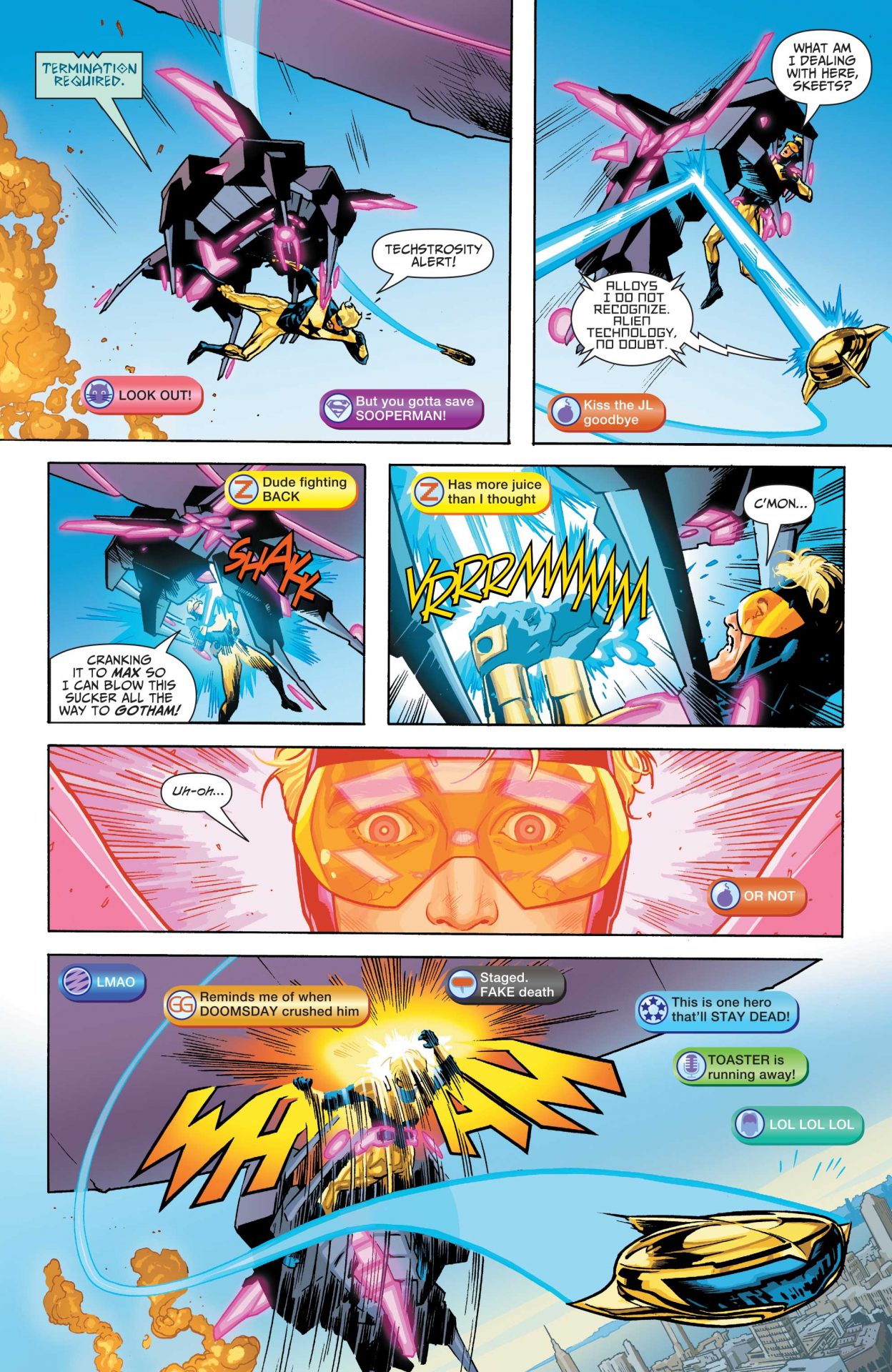 Since the last time Ted and Michael adventured together, a new Blue Beetle has emerged. Jaime Reyes has been the Blue Beetle for an entire generation of readers. So how would Jurgens convince them to give ‘ole Ted a shot? “[Ted and Booster] will specifically refer to their past and time in the JL, which Booster and Jamie don’t share,” Jurgens said. “More than their powers and abilities, it’s the relationship between Ted and Booster that is key to the series. Those shared adventures in the past give them, and the readers, context for today. And, of course, should a great character like Jaime show up and fit in, so much the better!”

Just what is it about these guys that make their pairing so irresistible to fans? For Jurgens, the answer is relatively simple. “They are the absolute best of friends. Inseparable.” Jurgens even puts them in rather esteemed company when describing them. “I see them as Bob Hope and Bing Crosby. Think of them as Hobbs and Shaw or maybe even Bill and Ted! That friendship is always something worth paying attention to, because if we look back, the team-ups of Green Lantern and Green Arrow, Hawkman and the Atom and, of course, Superman and Batman have great meaning.” 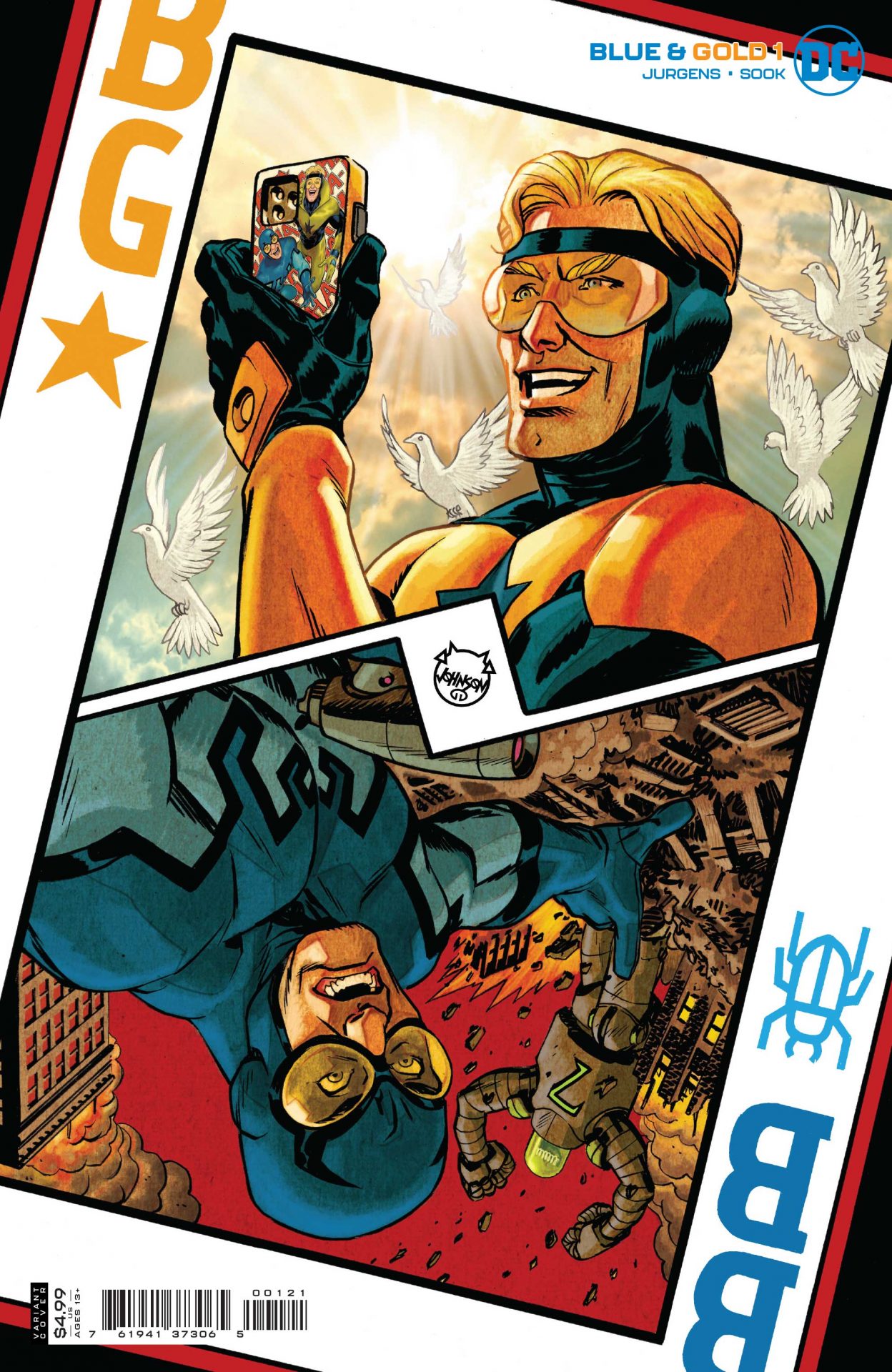 Blue and Gold #1 (of 8) by Dan Jurgens and Ryan Sook arrives on July 20 with a cover by Sook, and a card stock variant cover by Dave Johnson.