Over the past two years, Tales From the Loop has become a genuine tabletop phenomenon. Simon Stålenhag’s first art book became a gorgeous RPG that sold out its first two print runs and won multiple awards including five ENnies, three Golden Geek Awards, and was even recognized in our Best in Tabletop list for 2017. A sequel for such a big success is inevitable.

Publisher Free League just launched a Kickstarter for Things From The Flood, a sequel RPG for Tales based off of the second art book in the series. The project funded within minutes and we were able to talk about the new game with Tomas who oversaw the development of both projects. 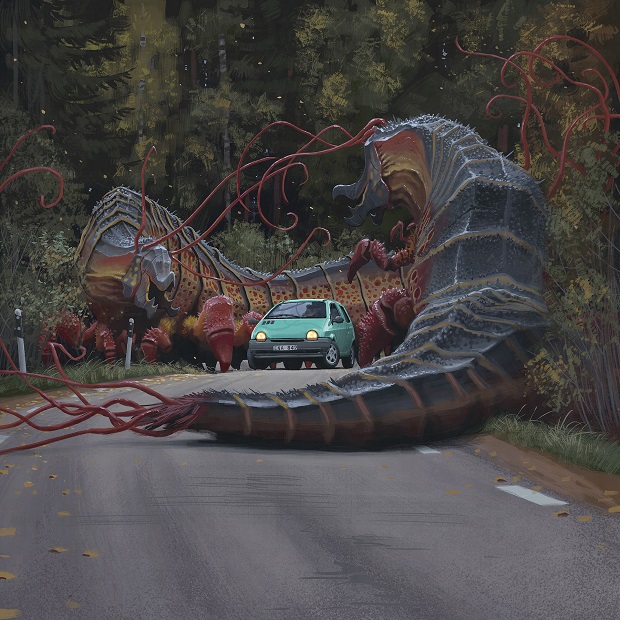 “In Things from the Flood,” said Härenstam, “the world of Tales from the Loop has taken a turn for dark and weird. The Kids in the wondrous ’80s have grown up to become older Teens in a ’90s, a colder and stranger place. The world does not seem so innocent anymore. The once mighty Loop has been shut down, the experiment abandoned and the land bought by a powerful corporation. The players portray Teens trying to find their way in a decade of change – both within and in the outside world. The mysterious Flood has transformed the once pastoral islands into a dark marshland. Some say that the black water pouring out of the ground comes from within the Loop itself. Machines are afflicted by a strange virus turning them unreliable and dangerous. Still, the Teens lives go on as before. They go to school, fall miserably in love, try to do everything possible to fend of boredom. When they hear about people going missing, and even turning up dead, they realize it’s time to gather the group again. One way or another, they will find out what these strange Things from the Flood really are.”

The game seems like a continuation of the “kids on bikes” genre renaissance that started thanks to the phenomenon of Stranger Things. Pushing the decade forward into darker times connects with elements of genre films like the end of Stand By Me where the narrator recounts the fates of all the kids, or the upcoming sequel to IT detailing The Losers’ battle with the creature in the modern day. While the first game was covered in the heady nostalgia of the 80’s, Things From The Flood takes its inspirations from darker music and media from 90s.

This was the age of the X-Files, grunge music and conspiracies uncovered about government and corporation alike. Players can jump in with new characters to this setting or they can use simple rules to bring their Loop characters forward in time from wide-eyed kids to suspicious teens.

The machinery also seems to have taken on a more sinister bent, changed from the bulky clean tech of Riksenergi to fusions of tissue and metal that give the setting an alien feel. All of the Loop’s facilities are overseen by the shadowy corporation Krafta, who will prove to be a worthy adversary to the Teens drawn back into probing the shuttered facilities of The Loop.

“The core theme of Things from the Flood is change,” said Härenstam. “Everything the teens used to depend on is changing, tearing at the seams. The crisis has put the teens’ parents out of their jobs and the Loop has been sold by the state-owned Riksenergi to Krafta Corp, a private corporation. The technological revolution lost its focus and the fields are littered with rusting robots. The machine cancer causes technology to act up and break down. No one believes in a brighter tomorrow anymore. As a contrast to this bleak world, the teens share strong bonds of friendship, that they will need to overcome the challenges they will be facing.”

Fans who got in on the original Tales From The Loop Kickstarter will get a copy of this PDF for free as it was the final stretch goal unlocked in that Kickstarter. The current Kickstarter is smashing through stretch goals that include an updated map, robot plan fold-outs, and additional mysteries, several of which can be played either during the era of The Flood or the original Loop. The Kickstarter runs through October 9th. After that, it will be next year at the earliest before exploring the next chapter in this story.

What song would kick off your 90s mixtape? Let us know in the comments!

Kids On Bikes are everywhere!

TAGGED: things from the flood, Stranger Things, Tales from the Loop