Blacula shifted the vampire subset of horror with its debut in 1972. Until then, most vampire-centric entertainment overwhelmingly featured white characters. Some of them were everyday people but some were wealthy, including Dracula himself. However, this film looks at the genre through a Black lens with an aristocratic, intelligent, and complex protagonist. It sheds light on both the era of slavery and (at the time) modern-day through his perspective. Blacula is a romantic horror story; however, its brief explorations of slavery, imprisonment, and reincarnation draw interesting parallels with the concept of vampirism itself.

It’s no surprise that Blacula makes this social commentary and digs into heavy material because, well, that’s what horror does. The genre not only examines our fears of the unknown and seemingly impossible but it also intertwines those very real threats against us.

A Look at Slavery, Vampirism, and Race

The film starts off with an introduction to Mamuwalde, an African prince from the Nigerian Ibani nation. He and his wife Luva liaise with Dracula in Europe in 1780. Typically, a Dracula or vampire film set during this time would simply pretend that slavery was either nonexistent or downplay it as something trivial.

Mamuwalde, however, sought Dracula’s help in suppressing slave trading. Dracula’s response is what most would expect from a white person (or a centuries old being who presents as white) during that timeframe. He denies the request and makes not-so-subtle statements about Luva, particularly wanting to make her his slave. This causes a physical fight which ends with Dracula biting Mamuwalde. Dracula gives him the moniker “Blacula” and throws him into a coffin for eternity. Luva is left to starve to death in the same room as her husband’s coffin.

This scene alone gives viewers so much to unpack. First, there’s very real depiction of how someone like Dracula would have been towards Black people at that time, even those with high social status like Mamuwalde and Luva. Dracula refers to them as “dark people” and says they are “from the jungle,” with a derogatory tone. He lacks a basic level of respect towards Mamuwalde, making his fetish-laden statement about having Luva be one of his slaves with zero shame.

His thoughts about slavery are also not surprising. Dracula has the influence and power to aid with ceasing a violent and dehumanizing practice.  He doesn’t want to because it benefits him. The concept of slavery itself is closely tied to vampirism when you think about it. They both involve someone imposing their will on someone else, stripping them of their autonomy, imprisoning them, and bringing them into this new place (or realm) where they have to learn to exist. 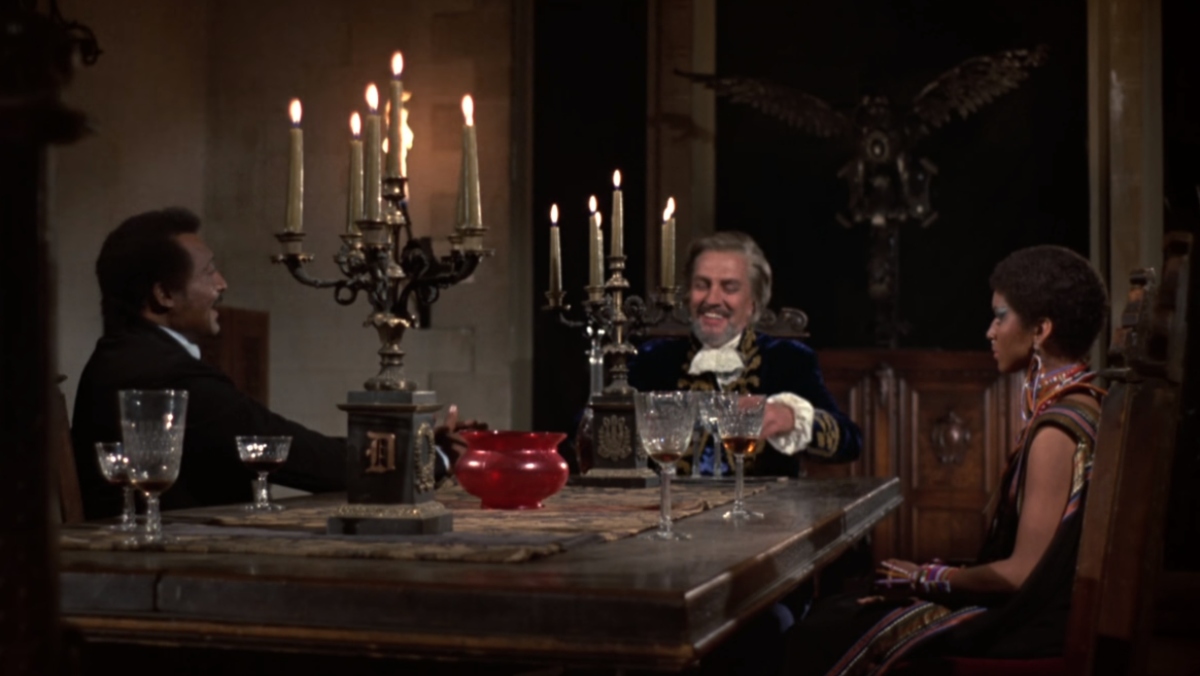 Sure, there have been vampire stories where a human consents to a bite like Twilight; however, the typical vampire-human exchange usually involves the former attacking the latter. The human becomes a vampire themselves or perhaps a ghoul-like creature, who is essentially the vampire’s slave.  It’s often violent, sudden, shocking, and traumatic for the victim because they are imprisoned in their own bodies for eternity.

Dracula biting Mamuwalde and giving him the name Blacula is akin to a white slavemaster stripping someone of their native name and giving them another name. Mamuwalde goes from being royalty and his own person to Dracula seeing him as just an extension of himself. But, Mamuwalde fights back against this later in the film, going by his actual name even though he’s no longer the same. It’s a small reclamation of power despite the curse put on his existence. Also, no one would call themselves Blacula in real life.

Dracula dooms him to a “living hell,” which is what many enslaved people experienced – a life where they have lost their former identity and agency. Dracula wants to punish Mamuwalde for daring to exist in a manner that didn’t suit what he thought about Black people. Mamuwalde’s challenging demeanor and desire to disrupt the system fuels Dracula’s determination to make him “pay.”

“You shall pay, Black prince. I shall place a curse of suffering on you that will doom to you a living hell. I curse you with my name. You shall be…Blacula.” –Dracula

Furthermore, the treatment of Luva reflects how some white men view Black women. Dracula thought his desire/lust for a Black woman was somehow a compliment to Mamuwalde. In his opinion, Luva was more of an object than an actual human being like her white counterparts. This is a historical nightmare for Black women, many of whom deal with unspeakable sexual and physical violence stemming from someone’s dehumanizing fetish.

Luva watches her husband suffer while she endures the physical pain of starving, a truly harrowing sentence for someone who barely spoke a word. She is in a prison, her own version of a living hell, on foreign soil at a racist vampire’s house. Dracula imposes the same cruelty against them as a slave owner would for the same reasons – because he can.

Blacula‘s Depiction of Reincarnation Through Vampires

Mamuwalde spends years thirsting and desiring freedom before he’s inadvertently released into the world. This is where Blacula leans into the concept of reincarnation. There’s certainly an argument that vampirism and reincarnation have some tangential connection. When a person is bit by a vampire, there is the process of them actually dying only to be “reborn” again as either a vampire or ghoul. So, even though they aren’t in another body, it’s still a form of someone’s non-physical essence showing up in a body post-mortem.

In this film, Mamuwalde is dead and essentially reborn into Blacula; however, he still has the same memories and exists in the same body, albeit with ashier skin and deadly fangs at times. He also maintains his same charm and personality, which is what leads to the love story arc.

This isn’t uncommon for the genre. Plenty of humans become vampires and remember their former lives quite well. But does it really count as reincarnation? In a way. The being gets to live a new “life,” roam the Earth, never age, and do what they want to do. They are not truly whoever they were before.

Tina is more of the classic depiction of reincarnation. She’s a 1970s era (read: modern day) woman who encounters Mamuwalde and slowly falls for him. Tina is in an identical physical form as Luva; however, she does not have any of the memories nor connection to her previous life. 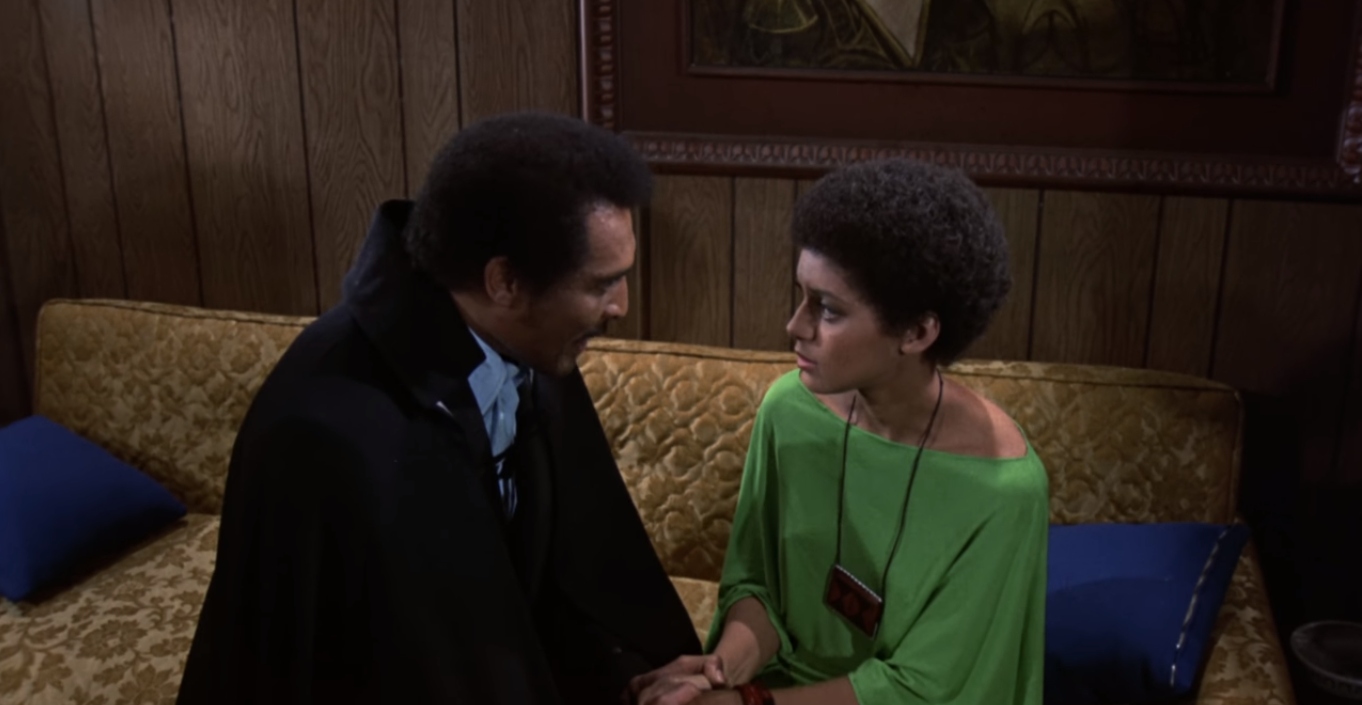 He has to detail past for her but she has this unexplainable soul tie to him that convinces her to believe him. Mamuwalde offers Tina a chance to fully be with him as a vampire, which she initially rejects out of understandable fear. To be fair, he does a poor job of explaining what will happen to her.

Mamuwalde eventually turns Tina into a vampire, but its to save her life and after she’s already expressed consent in being with him. He keenly understands what it means to have this happen against a person’s will. He loves her too much to force a decision on her, even though he could given his abilities. So Tina gets to live in a different sense because of his actions.

Sadly, their story meets a tragic end. Tina/Luva once again dies at the behest of a white man (a police officer this time, no less). Mamuwalde looks his resolve to live and steps into the morning sun.

Blacula’s love story is the crux of its plot but it hinges on some serious material. The institution of slavery and imprisonment and conversations around consent give fans a different look at vampirism. This film gave it a sexier edge with attractive protagonists and love. But vampirism is a pretty disturbing concept at its core. Even still, Blacula offers something more: a pushback against physical and spiritual chains in an attempt to reclaim life and love.