When I first heard about Wingspan, I didn’t think a board game about bird enthusiasts was something in my wheelhouse. I’m a fan of Stonemaier Games, though, and love what they bring to the hobby: smooth-playing games with top-notch components and stellar customer service. But was the company’s track record enough for me to try Wingspan, much less fall in love with it?

I raved about Stonemaier’s My Little Scythe last year and ranked it as one of the best games released in 2018. Unfortunately, I think it was (unfairly) labeled as a kids’ game early on and it seemed like hobby gamers passed over it somewhat. Wingspan, thankfully, is not being dismissed quite as easily. Designed by Elizabeth Hargrave, with art by Ana Maria Jaramillo, Natalia Rojas, and Beth Sobel, Wingspan is an early contender for game of the year. So how does a game about bird enthusiasts trying to discover and attract birds to wildlife preserves shoot to the top of the hotness list? 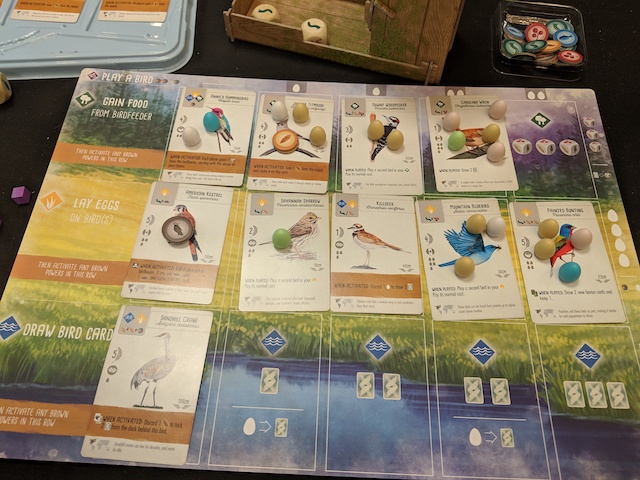 The mechanisms in Wingspan are rock solid. Veteran gamers will find the engine-building straight-forward and comfortable; drawing from a Terraforming–Mars-sized deck of bird cards, you’ll place those birds on one of three rows representing different terrains on your player mat. When you activate a row, you simply start at the far right and go left, triggering any abilities in that row.

Appeals to New and Veteran Gamers

While hobby gamers will love this game, Wingspan can also be easily understood by new gamers. If you want a bird in your habitat, simply feed it the right type of food. Later, when you activate that row, you’ll gain any of its special abilities. It’s this neat and orderly turn structure that will allows new gamers to easily grasp the engine-building mechanism. Even with all of the information on the cards (some for game purposes, some for actually *gasp* learning about the birds themselves) it’s a breeze figuring out the order of operations.

Best of all, turns go by quickly. Again, everyone’s doing exactly one action per turn and triggering any abilities in the row they’ve chosen. Even as you attract more birds to your habitat and begin combo-ing off of each other, there’s still an easy-to-understand order so you don’t get lost when playing. Laying eggs and tucking cards for bonus points is simple to do as well.

Finally, the artwork and components are out of this world. I’ve seen Wingspan set up at two different conventions (Orccon in Los Angeles and Dice Tower West in Las Vegas) and both times people were ooh-ing and aah-ing over its table presence, highlighted by the birdhouse dice tower. It’s a totally unnecessary yet at the same time absolutely perfect addition to the game. All of the bird cards are beautifully illustrated as well, with terrific player mats and food token art. While this game is even better with upgraded components (3D printed birdhouse action tokens, realistic food tokens from third-party retailers, etc.), it’s the gameplay itself that will bring gamers back for repeated plays.

For a 45-minute game, Wingspan is deeply satisfying and wonderful gaming experience. With only four rounds, you’re pressed for time to complete points-yielding actions, yet you’re never rushed nor does the game overstay its welcome. And while you’ll be impressed by its aesthetic, there’s no denying that Wingspan’s gameplay is its main feature.