Engineer Creates a Bicycle with Circular Saws for Wheels - Nerdist

Engineer Creates a Bicycle with Circular Saws for Wheels

Riding a bicycle is considered so intuitive that it has become the posterchild (posterhobby? postertask?) for things you never forget how to do. But, as with all of life’s simplest pleasures, sometimes there is cause to make matters more complicated.

Say you living in a landscape dominated by ice, as does one particularly enterprising engineer. Nevertheless, you feel inclined for a bike ride around the neighborhood. Maybe you’ve got a paper route to complete; or maybe you’ve been listening to too many Queen songs in your sleep; perhaps you and your new alien friend are on the run from government agents. No matter why—sometimes you just gotta bike. And the aforementioned engineer figured out the best way (at the very least, a way) to bike across frozen terrain. He replaced his bike’s wheels with circular saws.

This video is the latest release of the science-inclined YouTube channel The Q, published in early February; we first saw the video via Laughing Squid. The engineer in the video is the very same who previously replaced his bicycle’s wheels with walking mechanical “legs” and, before that, with running shoes. So clearly he’s got a type.

The video takes us through the process of removing the bike’s wheels, modding circular saws in their place, and then taking to the ice. As we can see at the 4:30 mark, the first attempt doesn’t go quite so smoothly. But a second amendment to the bike goes off without a hitch, and we can observe successful ice-riding at the video’s end. 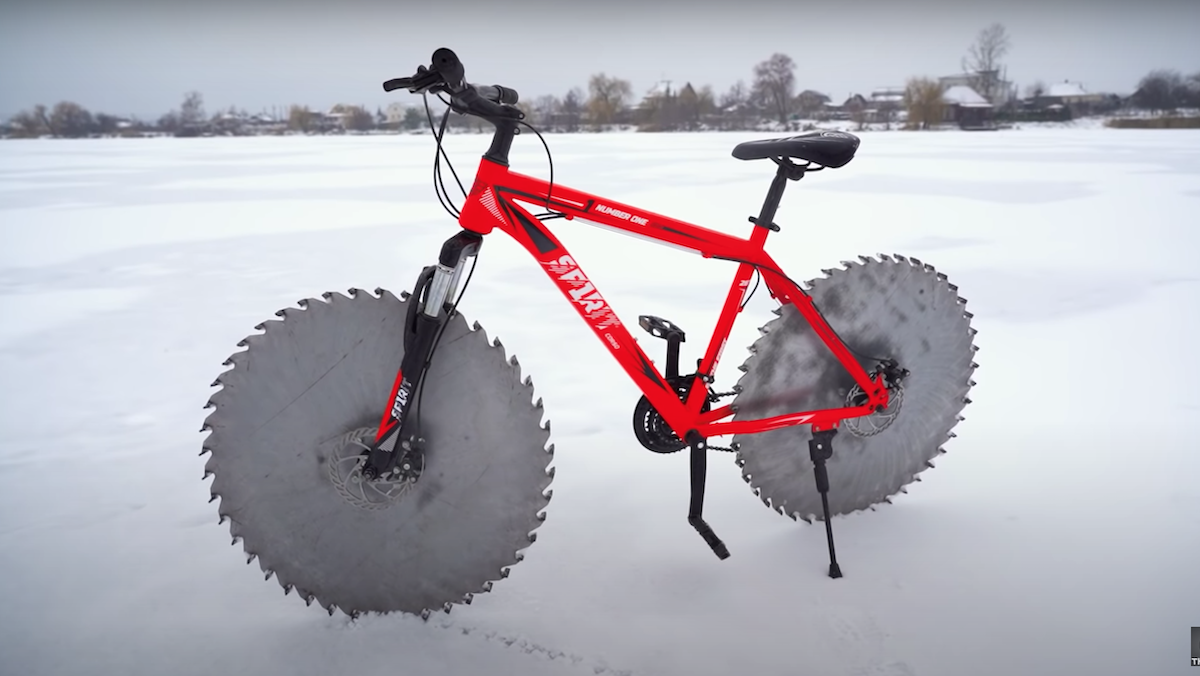 Now, buzzsaw biking probably wouldn’t work quite as well on mountain paths or on the West Side Highway. Which is likely for the best, as this vehicular aesthetic seems befit for a supervillain’s henchman in a post-apocalyptic movie. For now, it’s best we marvel in awe at this singular exploit in saw-biking. Bravo!