The Best Rom-Com Anime for Love and Laughter - Nerdist

The Best Rom-Com Anime for Love and Laughter

Arakawa Under the Bridge

Ko Ichinomiya subscribes to his wealthy family’s motto of “never be indebted to anyway”. As such when he falls into a river he doesn’t ask for help, but receives it nonetheless, from a strange girl named Nino who lives under the bridge. Nino (a self-proclaimed Venusian) wants to experience love and Ko owes her a debt so he decides to aid her and, while aiding her, he must a wide array of weird, hilarious characters who make up the residents of the Arakawa River and bridge. 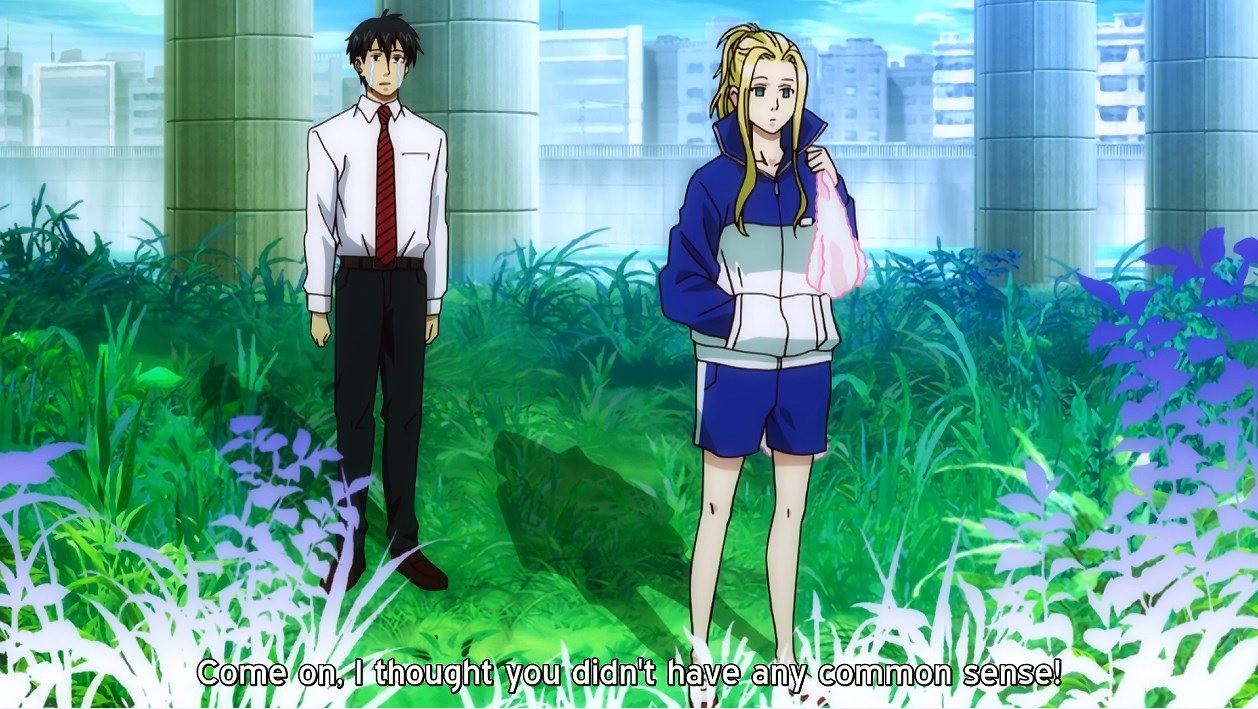 This anime is heavier on the comedy, especially if you love oddball characters. From the man in a kappa costume saying he’s a real kappa to the man in a nun outfit who looks as though he’s seen some battles, there is no short supply of kooky, funny characters, and Ko’s reaction just ups the hilarity.

One of the older animes on this list, that has spawned a few live action dramas in various languages (my fav is Japanese version) this series follows our lead heroine, Tsukushi Makino, in this reverse harem series as she navigates a rich, elite school as a poor student. All Makino wants is to graduate and get out without drawing attention to herself. Unfortunately, plans change when her friend draws the attention of F4, a group of four boys who are the elite of the elite at the school, and Makino steps in to help, She is targeted and bullied by the school’s students at the behest of F4’s leader Tsukasa Domyoji. However, Makino isn’t the type to back down and her fearlessness leads to unlikely friendships and love interests.

While it deals with serious subjects, overall the series is lighthearted and funny. Makino’s mother is particularly memorable because she wants her daughter to marry rich. Despite the aged look of the series, you won’t regret giving this a look and may even look for some of the live action versions afterwards.

Being shy is one thing. Being shy and looking like a vengeful spirit right out of a Japanese horror film is another. Sawako (named Sadako from The Ring at school) has a hard time making friends as people think she can see spirits and curse people. It’s not all the students’ fault as when she tries to smile it’s terrifying. But one popular student, Shota Kazehaya, helps her to try and make friends. As she works to speak up, her kindness not only wins her friends, but Kazehaya’s heart. 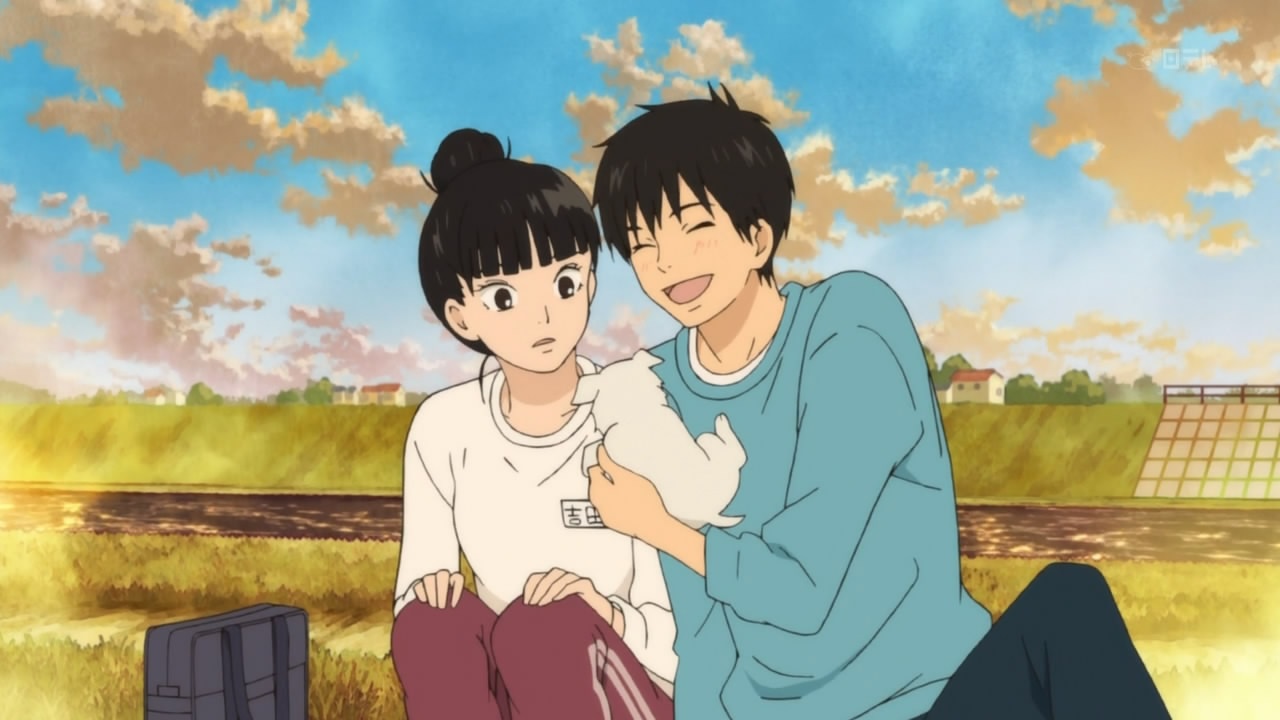 This anime is both funny and oh so cute! There’s so much to love about this series from Sawako’s creepy smiles, to the gym teacher’s loudmouthed antics. The way others see her and the way she sees her behavior is entertaining and a must watch. If you’ve ever seen The Ring or Juon, you will understand why students initially flee when she’s near.

Four gorgeous high school boys live in a mansion rent free. Until the owner tells them they have two choices: either pay rent or transform her niece into a lady. It seems simple enough, until they realize her niece, Sunako, is a goth girl who hides in the shadows, talks to her skeletons, and has a penchant for nosebleeds and melting when confronted with dazzling beautiful creatures like Kyohei, one of the four boys charged with helping her.

While some romantic elements, this series leans more to the comedy side; however it would be remiss not to include this on your watchlist as Kyohei and Sunako’s relationship will make you cackle. He wants her to be a lady so he doesn’t have to pay rent, and she wants to kill him because he’s that beautiful.

Kae Serinuma loves anime and when her favorite anime character dies, she stays in her room for a week and loses a lot of weight. Upon returning to school, suddenly all the boys that never noticed her in a romantic sense are pursuing her. There’s just one problem. Serinuma is considered a fujoshi, meaning her favorite animes explore yaoi (guy on guy) romance or bromance. What is she supposed to do when she’s more interested in the guys who like her getting together? 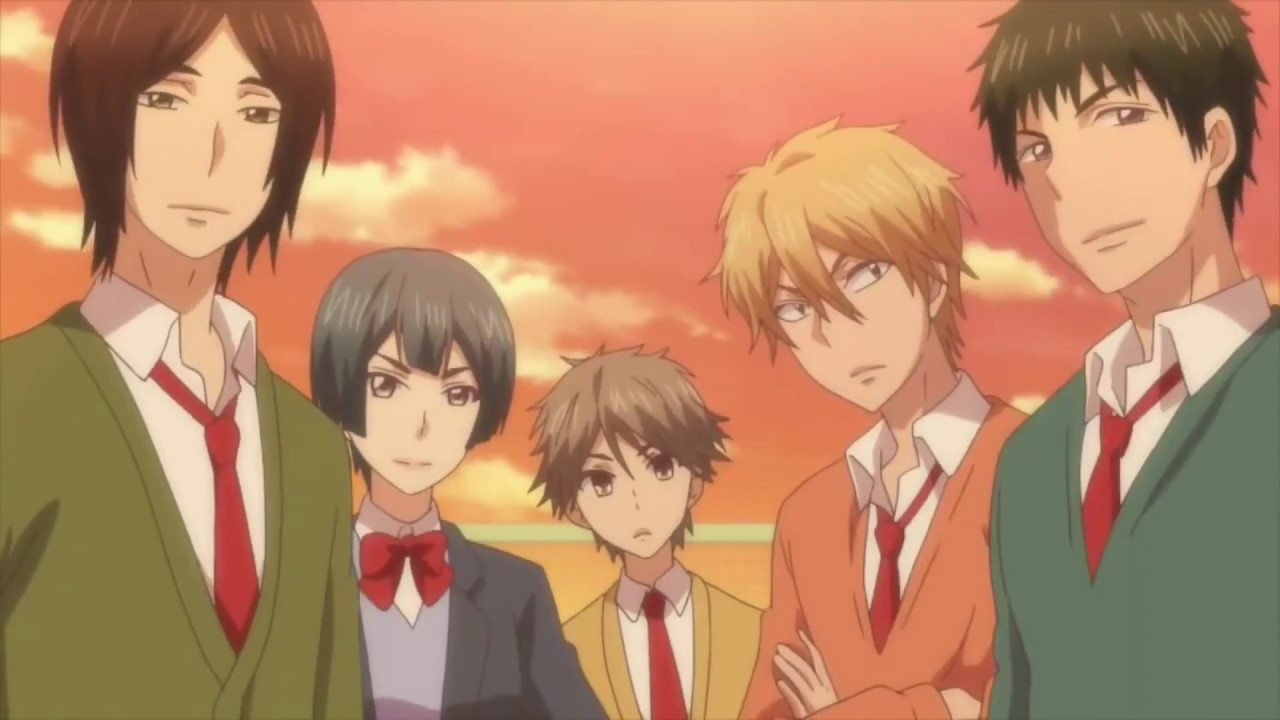 It’s problematic that these boys never expressed interest while she was fat, but if you can look past it there are some many funny parts in this series, namely Serinuma herself. She gets nosebleeds and drools whenever she sees the guys being friendly with each other. And you may love her animated debate over who’s a “top” or “bottom” in the yaoi animes she ships.

Kaguya Shinomiya and Miyuki Shirogane lead the student council at a rich, elite private school. They’re also in love with each other. The problem is they both believe to confess their love first would be a weakness. So what else can they do, besides orchestrate situations where the other person has to confess. In this battle for love and pride there can be only one victor. 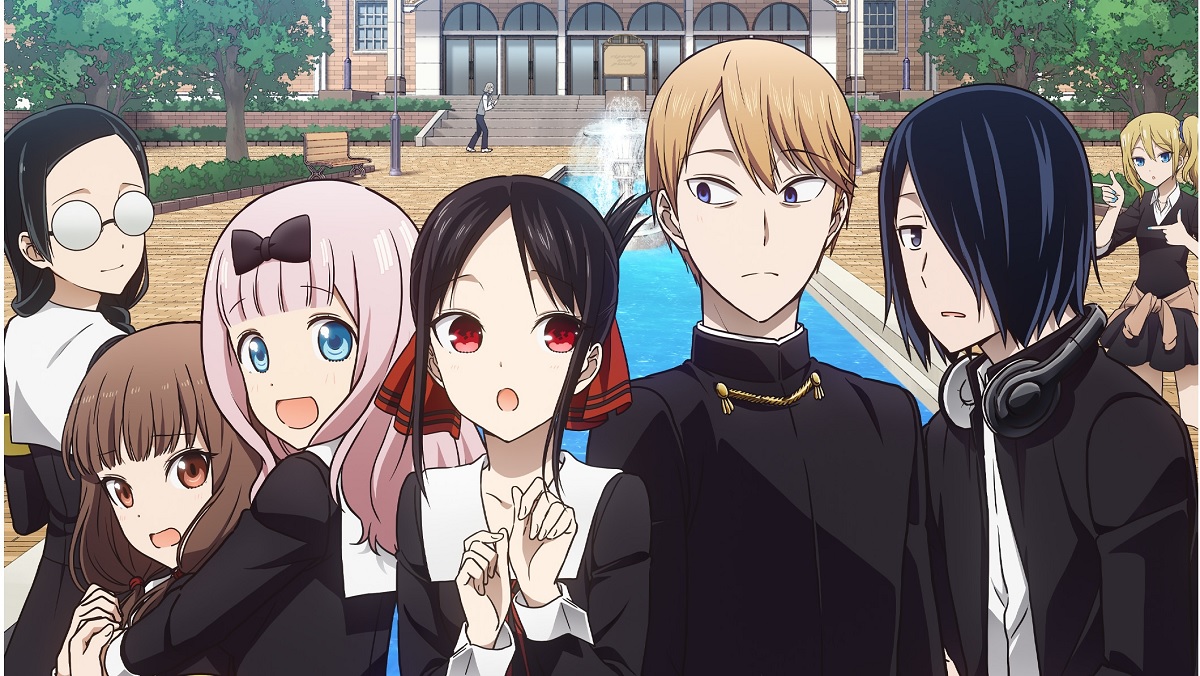 This series is a raucous good time. There is so much conniving and scheming that you have to tip your hat to them, particularly Miyuki as her plans are often more detailed than Kaguya’s. The side characters are also hilarious as they don’t understand what is happening between these two and always throw a wrench in their schemes. A definite must see, if you’re planning to wring a confession out of a love interest.

Miyazawa Yukino was excited for high school, ready to declare her greatness and receive heaps of praise; however someone scored higher than her on the test, Arima Souichiro. Miyazawa pretends to be sweet and demure at school while excelling at sports and academics, just like Arima. But she does so because she loves the praise and attention she receives. When Arima discovers her secret and blackmails her, their lives become intertwined as they explore who they are individually and who they are to each other.

This is another older series, but hilarious thanks to Miyazawa and what she brings out in Arima. There’s love, bullying, drama and heaps of comedy in this series. The artwork is still incredibly beautiful and heartfelt.

Koizumi Risa is entering high school and hoping to find a boyfriend, but she’s so tall and isn’t seen as a girl. Otani is short and rarely seen as a boy. Together, they are considered a comedy duo by the school as they bicker and create scenes. They decide to compete to find a partner and hilarity and hijinks ensue. 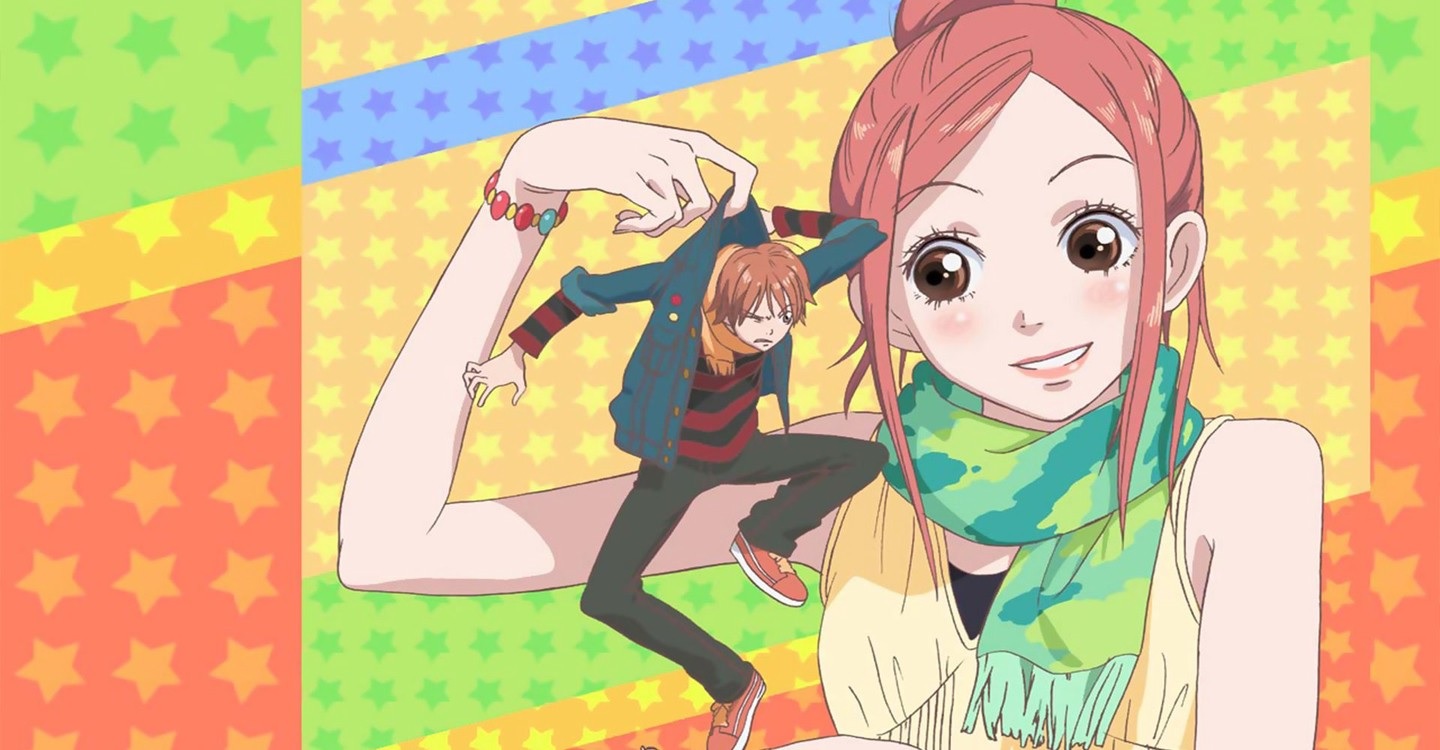 This is one of the funniest animes out there. Koizumi’s facial expressions and her best friend’s occasional back breaking attacks will leave you gasping. While many of these animes don’t have realistic scenes (i.e. Koizumi floating as a ghost) we can all relate to having a complex about our appearance, and the pain and joys of first love.

Kotoko finally works up the courage to confess her love to fellow high schooler, Naoki. Naoki, smart and athletic, is cold, aloof and bluntly tells her he doesn’t like stupid girls. Both heartbroken and embarrassed, Kotoko’s situation worsens as, due to a natural disaster, she and her father move in with her dad’s best friend, who is Naoki’s father. Living under the same roof creates a problem for Kotoko who is trying to suppress her feelings, and Naoki, who can’t seem to avoid her.

This anime is adorable. Not only will you fall in love with how kind and warm she is, but you will root for her as their lives continue past high school.

Where to Watch: Hulu (Sub)

In this society, computers (known as persocoms), can be as small as a keychain or doll that moves and talks, or the size and appearance of a person. Hideki Motosuwa didn’t pass his exams to get into college, so he heads to Tokyo to take courses to study and prepare to try again. Too poor to afford his own persocom, he finds one in the trash and brings it home. After struggling to find her switch (between her legs) to turn her on, he names her Chi since that’s all she can initially say, but as time passes he realizes that Chi is no ordinary personal computer and his feelings for her aren’t ordinary either. 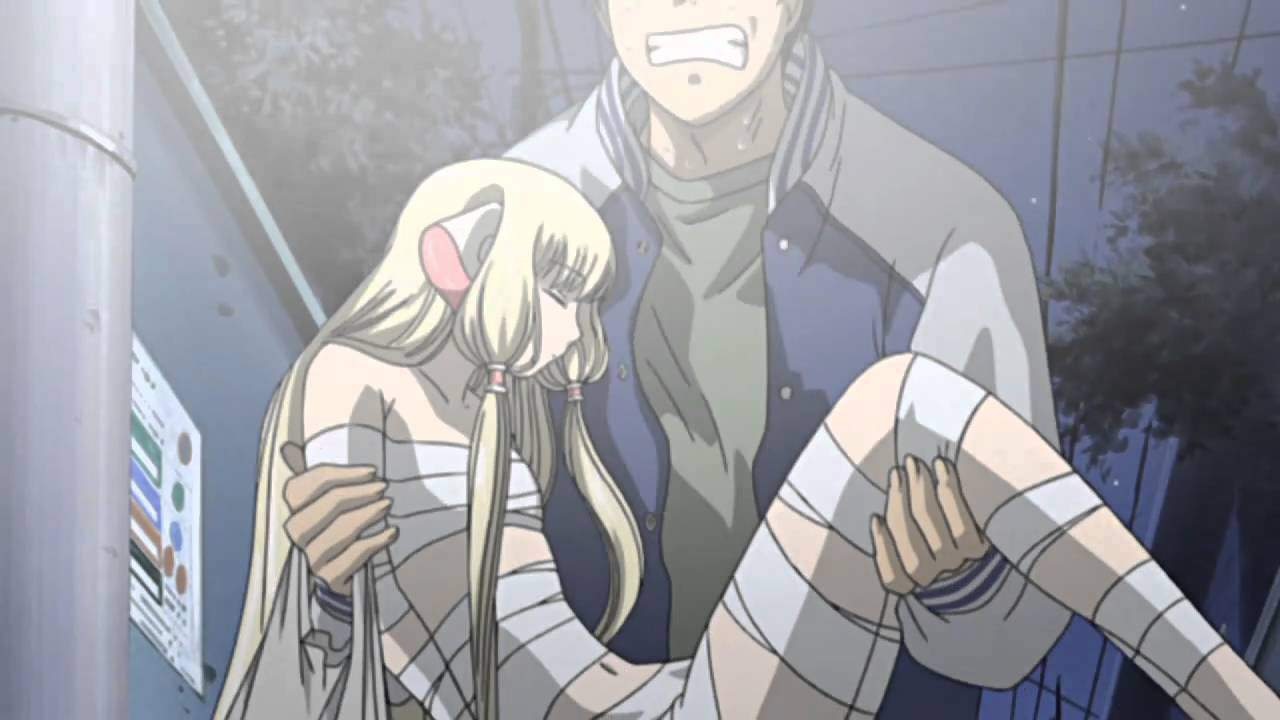 From CLAMP, an all-female manga artist group, who also helped create animes like Cardcaptor Sakura and Code Geass: Lelouch of the Rebellion, comes this sweet romantic comedy that explores love and what it means to be human. Is it genetics? Appearance? The ability to learn and love? Watch this series that explores it all in an entertaining way.

Where to Watch: Funimation (Sub/Dub)

Haruhi Fujioka is attending an elite private school on scholarship. While looking for a quiet place to study she encounters the Ouran High School Host Club, a group of boys who cater to the girls in the school. After destroying an expensive vase, and thinking she is a boy, the leader of the club, Tamaki, has her work to pay off her debt. But will she still be able to remain a part of the club if others realize she is a girl? 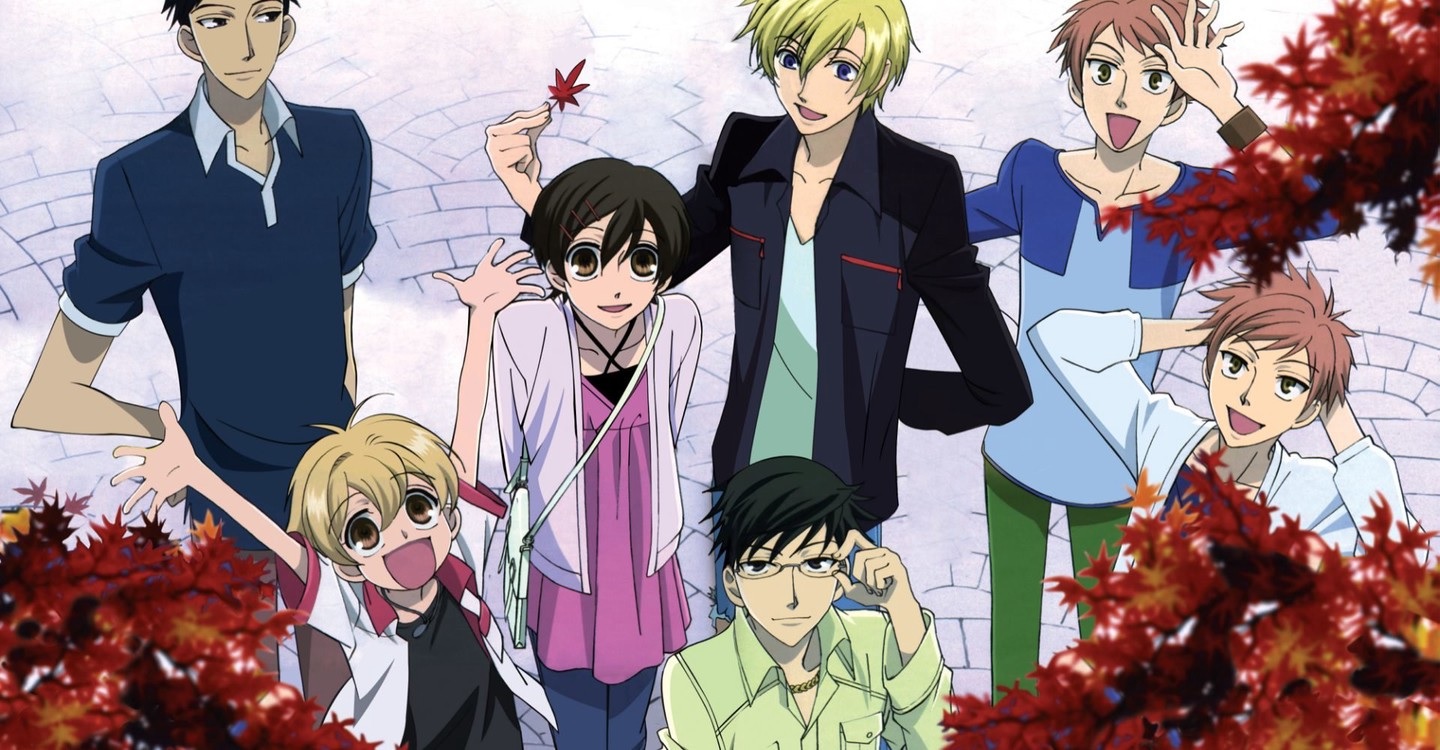 A reverse harem series that also pokes fun and deconstructs the anime romantic comedy genres as a whole, it’s easy to see why this series is one of the best of its kind. The characters and episodes are side splitting, and there’s someone for every viewer. Available on three different streaming services, there is no excuse not to give this anime series your undivided attention!