Barnyard Roundup - A Game About Pigs, Lying, and Hilarity - Nerdist

Barnyard Roundup – A Game About Pigs, Lying, and Hilarity

When I think of a farm, I immediately go to a serene and calm place from my distant childhood. The memories are a little foggy, but I can tell you that my uncle’s place was magical. We rode horses, climbed trees, and ran until we passed out. Barnyard Roundup is nothing like that. Here, your uncle is a lying sack of manure.

This is a bluffing game. That means it’s social, loud, and full of laughter. The goal is to fill your pen with as many animals as possible to score big points. Each other player is trying to do the same so you’ll take every opportunity to swindle and make them look the fool. 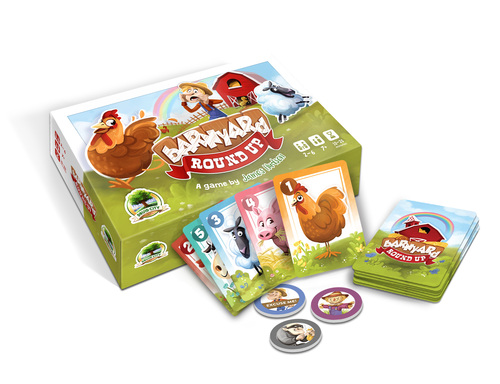 You’re dealt a hand of cards consisting of pigs, cows, goats, and the like. On your turn, you’ll take one or more of the same animal from your hand and place them face down on the table. Then you choose the most daft player and either feed them a lie or tell them the truth. One is not necessarily better than the other as the trick is simply to dupe your bro with double-think and get him to curse your name.

They’ll eye you up and swallow hard before defiantly spitting, “Nope!”

When you reveal the two birds and your opponent facepalms, you laugh all the way to your henhouse.

If the enemy clodhopper gets it wrong, you get the animals straight to your pen. If they get it right, then they’re stolen and your opponent gets to bask in their future dinner–my group may be a little darker than yours. Each animal is worth a set amount of points as dictated on the card. Cows sit at the top of the food chain with a healthy five, while the lowly white meat is a sad single pointer.

It gets better, though. You can pass crows to another player. Yeah, those vile squawking things in Dumbo that won’t shut up. You have to claim they are another, more chipper animal type. Whoever gets stuck with them will want to flip the table because they inflict a spanking -5 points per. Yuck.

Some of the best moments are when you drop a three spot of crows on an unsuspecting farmer. Flipping those birds over is worth more words than a picture. 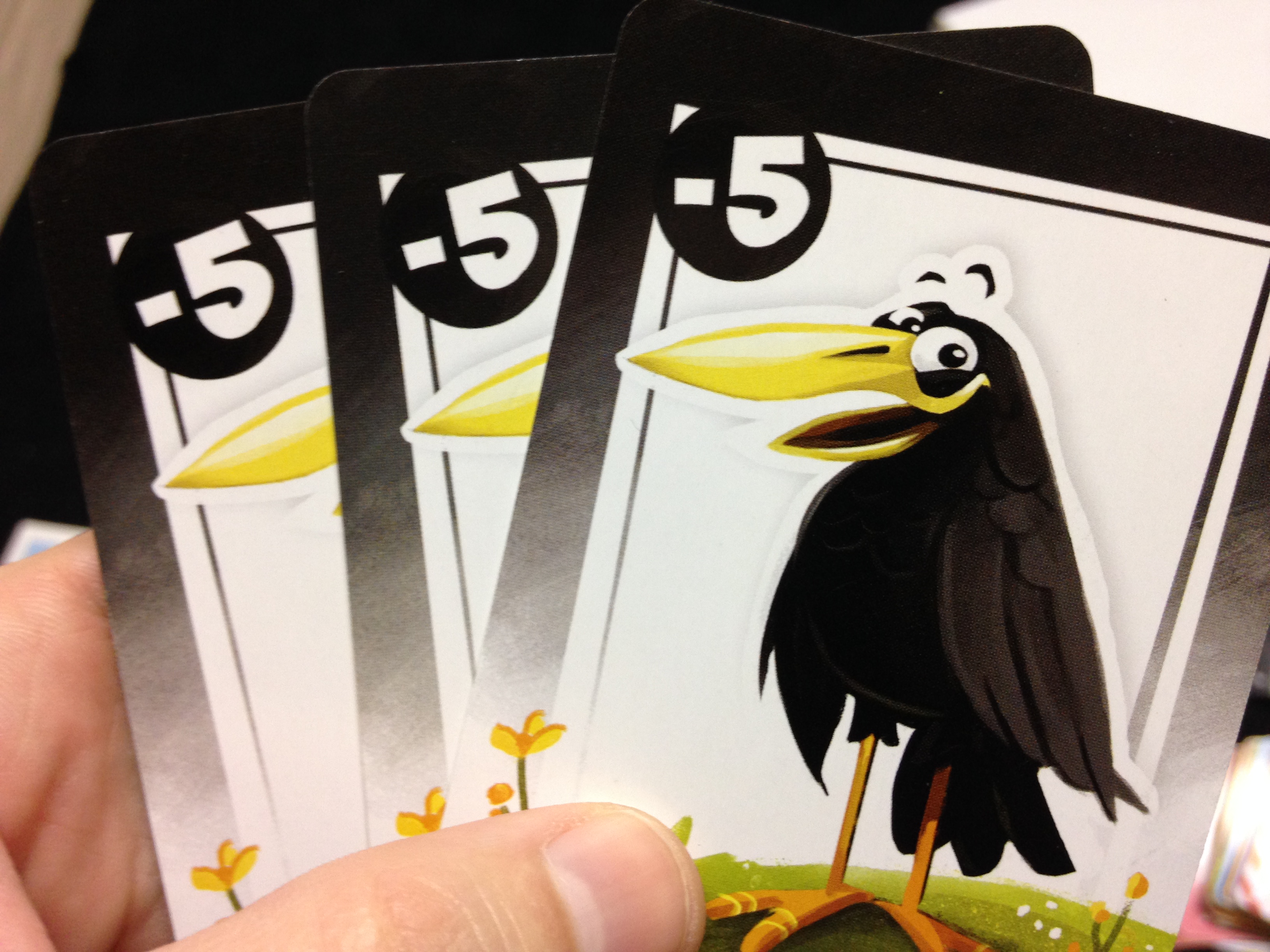 Barnyard Roundup succeeds because it’s built on a strong foundation. It most closely resembles a combination of the German import Kakerlaken (Cockroach) Poker and the ever popular Sheriff of Nottingham. Designer James Hudson improved on some of the issues of those designs. Cockroach Poker’s structure results in a single person at the table losing and everyone else winning. This means you pile on the first person that shows weakness and it snowballs from there. Barnyard Roundup clears this blemish while retaining all of the mirth and glorious fowl play.

While the farmhand setting isn’t necessarily exciting, it certainly makes for a more approachable experience for non-gamers. The rules are simple enough that you can even get your grandma to the table and make her eat crow. This is the type of title that can be played laissez-faire, yet it can also be rode to the hilt with a dollop of ruthlessness. It hearkens to Carcassonne in that it allows both an easy-going and cutthroat style of play. This adds utility to the design and helps earn its place on the shelf of even the most hardcore gamers.

The only beat where Barnyard Roundup perhaps stumbles is with its use of tokens. It hands a single counter to each player at game setup which provides a special ability. These 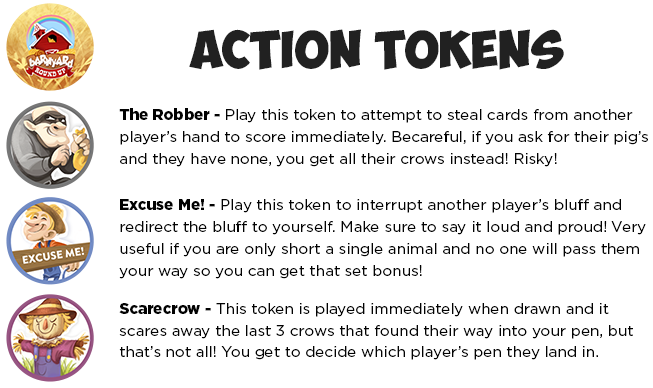 inject a bit of fun into play as they are spent to interrupt a player’s turn or possibly steal a swathe of cards. They’re also utilized as a catch-up mechanic to soften the blow of gaining a large amount of crows.

For the most part they do their job well. The only issue is that they provide another nuance and layer to a pretty streamlined game, while only going half-way. For those unfamiliar with the hobby, it’d be fine to axe them altogether.  Gamers with meeple tattoos that go to sleep with an Uwe Rosenburg rulebook on their nightstand, they will see the missed opportunity of including even more power variety. It would have been nice to see the pool shaken up with new abilities to add longevity and depth of play. Fingers crossed for an expansion that addresses this.

I’ll take that minor complaint and ultimately shrug it off. What you’ll find here is that there is actually a solid amount of depth and strategy. What animals you attempt to bluff, who you present your claim to, and how you approach scoring all bears nuance. Despite playing in a quick fifteen minutes, this is anything but a throwaway experience. Grudges will be sworn, beer will be spilled, and wit will be sharpened.

If you can muster up 4-6 players then Barnyard Roundup will deliver. With less participants it still works, but it won’t quite hit those high notes with gusto. Grab a handful friends and let the livestock hit the table. You may just be surprised at the quality of this little game, as well as how damn cruel your uncle is.

Are you a fan of bluffing games? Plan on checking out Barnyard Roundup? Let us know in the comments below!