Baby Chimps Playing with An Old Pup Is Next-Level Awww

Everybody prepare yourselves to make the jump to snuggle-cuddle-squeezy speed ’cause we have here footage of a baby chimpanzee playing with an old dog and it is next-level adorable. And while the clip is brief—criminally brief considering how cute it is—it’s just nice to know that in this Mad Max-esque world of ours there’s still a whole lot of tender love out there. Even if said love isn’t between members of our own species.

The video, which comes via Laughing Squid, is a brief excerpt from the BBC series, Baby Chimp Rescue. The series, for those who haven’t heard of it—presumably most people living outside of the UK—is about a chimpanzee orphanage in Liberia, run by Jimmy and Jenny Desmond. The former Desmond is reportedly only one of two veterinarians in all of Liberia, while the latter is the founder of the Liberia Chimpanzee Rescue & Protection organization (or LCRP). The pair of saints (c’mon, they are) and their team help to care for dozens of orphaned chimps by rehabilitating them and offering up a “sanctuary in the forest” where they can live as if they were out in the wild. 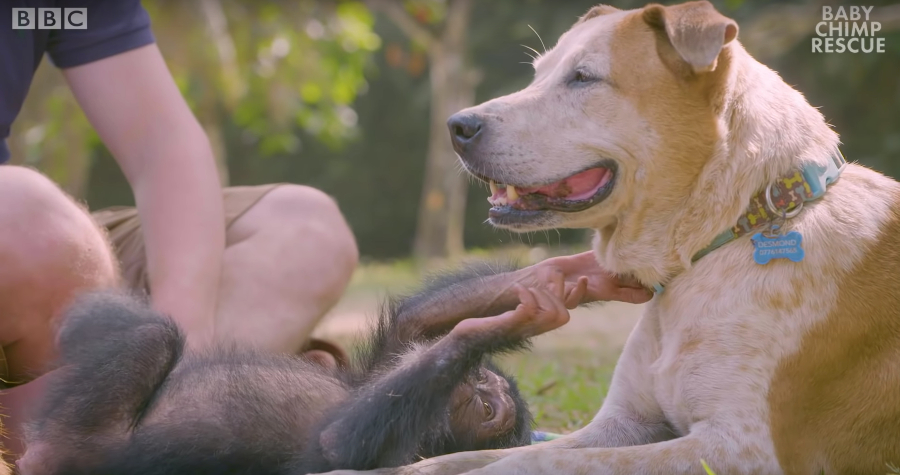 In the clip above, we’re gifted a look at several of the rescued baby chimps playing with Princess, a dog that acts as “a motherly figure to the chimps.” Jenny says in the clip that “[Princess] is a big part of [the chimps’] healing process, because she offers a really safe place for them.” Apparently even the chimpanzees who are scared of the other dogs, humans, or cats will still play with Princess because she’s so chill. “It’s like [Princess] is nurturing them back to health a little bit,” Jenny adds.

It isn’t all warmhearted cuteness when it comes to Baby Chimp Rescue though. In the second half of the clip, Jimmy presents Pepé (assumed spelling), a rescue pup who was hit in the back by a little boy. But even though it’s heartbreaking to imagine the kind of pain Pepé may be experiencing due to his injury, it’s still uplifting to see our fellow humans take on his rehabilitation as a serious project. Watch Pepé start to walk on his own at around 2:06 if you’re in the mood for a serious “I’m not crying, you’re crying” kind of moment.

Unfortunately, Baby Chimp Rescue can’t be streamed from the BBC Two website here in the U.S.—trust us, we tried. But there are tons of additional clips from the show available on BBC Earth’s YouTube page, as well as its Twitter account. And for those who’ve really had their heart strings pulled hard by these little hairy hands, donations to LCRP can be made through its website. Hopefully some of those donations go to like, a bone 401k for Princess though, ’cause that little, hard-working mama deserves it. She would also definitely make for a very popular Disney princess. Just saying.

What do you think about this video of baby chimpanzees playing with an old n’ wise pup? Is this indeed the cutest thing you’ve ever seen, or does that title still belong to say, this one-toothed porcupine eating some fruit? Give us your tingliest, most huggable thoughts in the comments!