Last year, Thor lost his iconic hammer,Â Mjolnir, during the events of Thor: Ragnarok. And while the God of Thunder eventually found his power within, it’s just not the same watching him go into battle without a mighty hammer in his hand. Fortunately, a new toy leak from Avengers: Infinity War appears to show us Thor is getting a new hammer, and it’s not the one you may have expected. Today’s Nerdist News is all aboutÂ Mjolnir 2.0, which is better known as Stormbreaker.[brightcove video_id=”5731823845001″ brightcove_account_id=”3653334524001″ brightcove_player_id=”rJs2ZD8x”]Join host and the goddess of hammers, Jessica Chobot, as she lays out the history of Stormbreaker. During the classic Walt Simonson run on Thor, an alien named Beta Ray Bill proved he was worthy to wieldÂ Mjolnir and the powers of Thor. Eventually, Odin created a new hammer for Bill he called Stormbreaker, and Bill has used it to defend the universe ever since. Sharp-eyed fans may have noticed Bill’s likeness as one of the previous champions of the arena in Thor: Ragnarok, but he has yet to make his official MCU debut. 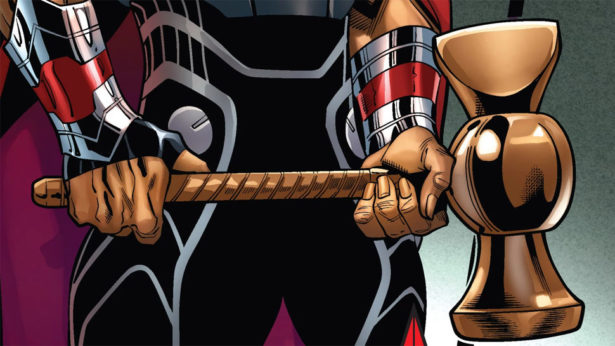 Many fans expected Thor to get his hands on Jarnbjorn, the magically powered axe that can take down a Celestial’s armor. But as you can see in the image above, Stormbreaker has part of an axe as well. Curiously, the leaked toy’s version of Stormbreaker looks like it has a wooden handle that resembles Groot. Perhaps teenage Groot will play a role in helping Thor acquire his new weapon in Infinity War. And maybe this is why Disney included Stormbreaker in the ride queue ofÂ Guardians of the Galaxy – Mission: BREAKOUT.What do you think about Thor’s new hammer? Call down the thunder in the comment section below!