In March, illustrator and comic book artist Jen Bartel helped commemorate the release of Captain Marvel, Marvel’s first female-driven solo superhero movie, by designing a version of Adidas’ AM4 sneaker in a colorway inspired by Carol Danvers’ red, gold and blue suit. For the release of Avengers: Endgame, Bartel announced plans Tuesday for a restock of the Captain Marvel shoe, but she also created another design, this time for the Avengers’ adversary Thanos. But this time her designs won’t be flying (okay, running) solo: Adidas is releasing six additional designs inspired by the heroes of the MCU for release on the film’s opening day.

Black Panther, Captain America, Iron Man, Nick Fury, Thor, and a different Captain Marvel design not by Bartel are part of Adidas’ “Heroes Among Us” collection. Though all of the shoes in the collection are designed for basketball, each character gets a different sneaker style first created for a different athlete: Black Panther’s beautiful black and purple adorns Damian Lillard’s Dame 5; the red, white, and blue of Captain America wraps snugly around your foot in John Wall’s N3XT L3V3L; the Captain Marvel colorway appears on Candace Parker’s Pro Vision shoe; Iron Man’s red and gold pairs vibrantly with James Harden’s Harden Vol. 3; a slick black and white colorway signifies Nick Fury on Tracy McGrady’s T-Mac 1; and a “cloud”-colored sole combines with red, gold and slate grey for Thor’s Marquee Boost. 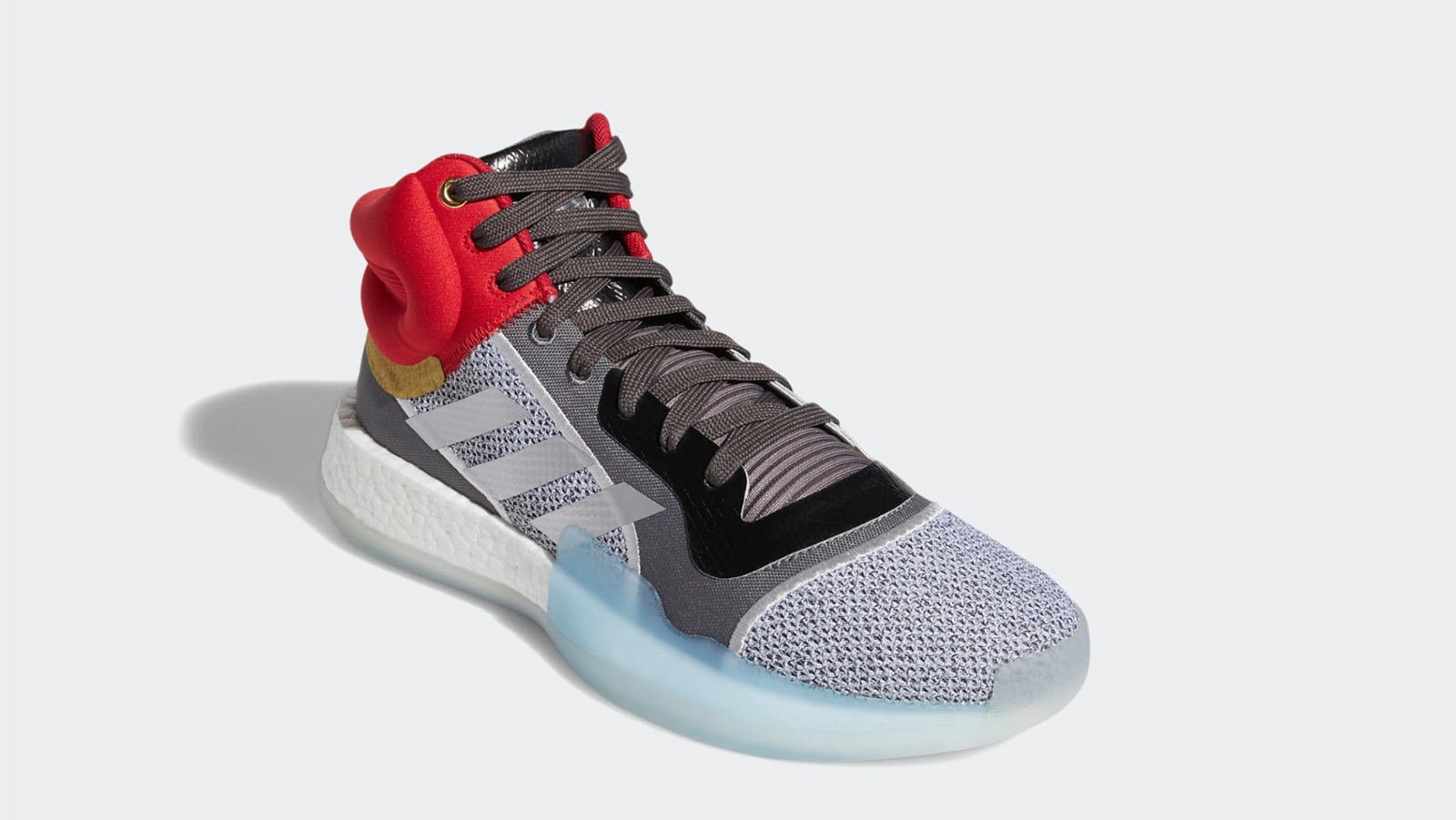 Sneaker collecting has often run parallel with the curation of action figures, posters, and collectibles, but the popularity of partnerships like last December’s Into the Spider-Verse-Jordan I “Origin Story” colorway shows that there’s more overlap than either footwear designers or owners of the original IP might have previously known. That Jordan sold out in minutes, and subsequently, Bartel’s design for Captain Marvel similarly flew off shelves.

Bartel’s shoe for Thanos is not directly a part of that “Heroes Among Us” collection, and unlike the other designs, it was created for a running shoe, not basketball. But even if Thanos isn’t fit to be in the same multiverse as the word “hero,” Bartel’s shoe is truly something special; with the possible exception of the Thor Marquee Boost, it’s by far the most beautifully and subtly designed, featuring an ombre purple and orange upper and a heel accent featuring—you guessed it—the Infinity Stones. 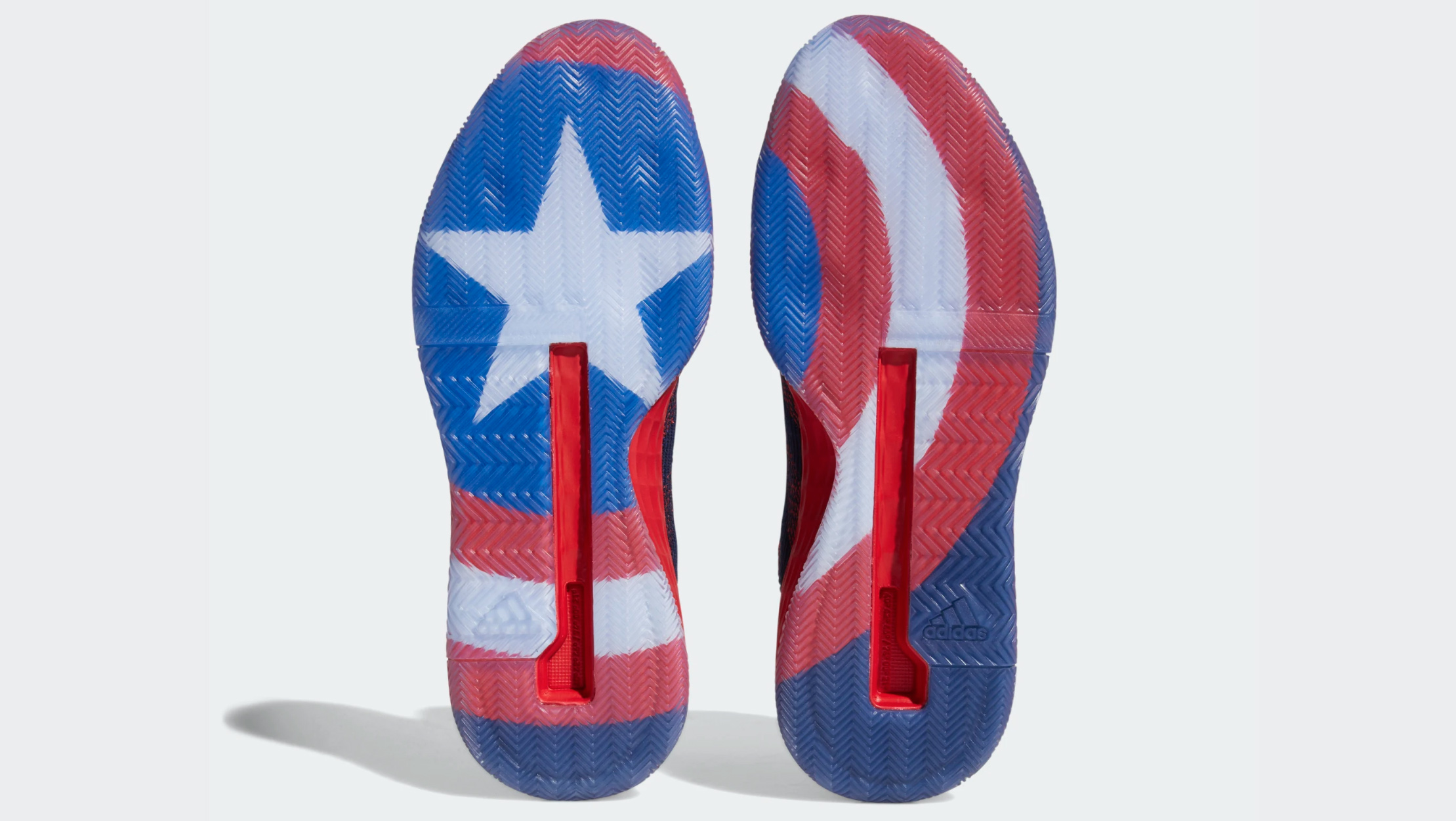 The “Heroes Among Us” collection are now available on Adidas’ website. Bartel’s Thanos sneaker, as well as a restock of her Captain Marvel design, are available on  Footlocker.com and in flagship stores in New York and Los Angeles.