AUDITION is Still Disturbing After 20 Years

We live in a world where a director who’s not even 60 years old can make over 100 films. That kind of output is truly unfathomable. That director is, of course, Takashi Miike, the Japanese auteur whose 28-year career in directing movies–beginning in ‘91 with direct-to-video efforts before graduating to theatrical features–has become the stuff of legends. This year marks the 20th anniversary of his breathrough year, and Audition, the major film that led him to the international stage is still just as affecting, but feels so different in context.

The world wasn’t ready for Audition. Made in 1999–a year that also saw Miike release three other films–Audition was the first major Japanese horror film to make a splash outside of Japan. While the term “J-Horror” would appear later with supernatural films like Ringu, Ju-On, and Pulse, Audition was the first to showcase the extreme nature of both the genre and Miike’s aesthetic. It took audiences into a cinematic world that wasn’t safe, wasn’t familiar, and was perhaps all too real.

Based on the novel of the same name by Ryu Murakami, Audition is the slowest of burns. Shigeharu Aoyama (Ryo Ishibashi) is a middle-aged widower whose 17-year-old son Shigehiko (Tetsu Sawaki) urges him to finally get back out there and get remarried “before it’s too late.” Aoyama’s friend Yoshikawa (Jun Kunimura) is a film producer who proposes they hold fake auditions for the “part” of Aoyama’s wife, and if he likes any of the prospects, he can ask them out afterwards. Beginning a relationship with duplicity and the promise of acting work seems a pretty bad method, but Aoyama agrees. 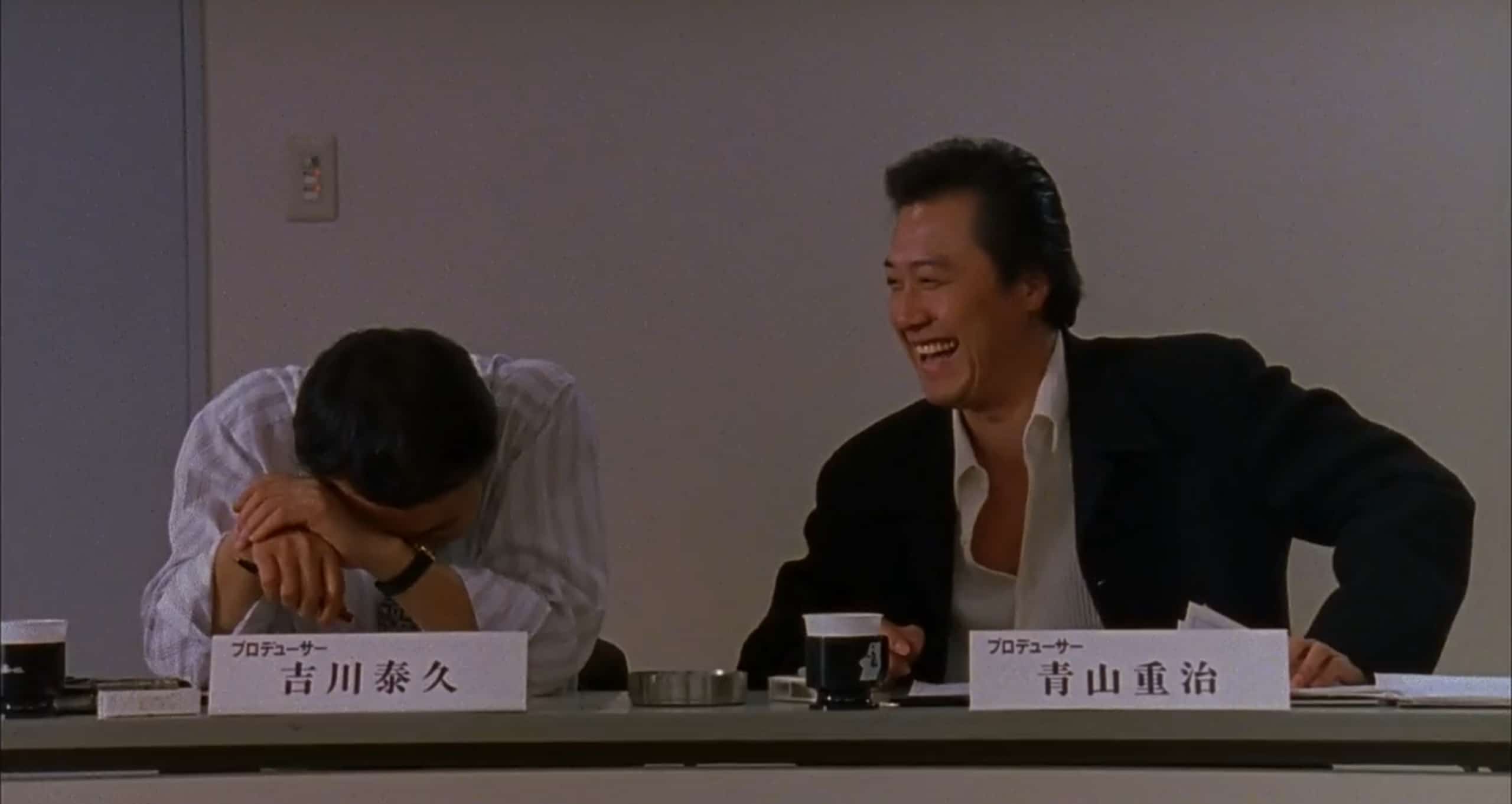 Prior to the day of auditions, Aoyama looks through the headshots and resumes of the young actresses and finds himself immediately drawn to one in partcular–Asami Yamazaki (Eihi Shiina), a former ballet dancer with an expression that conveys a hard life. After a montage of all the auditions, some awkward and others pretty hilarious, Aoyama finds himself waiting time and again for Asami to come in. Of course, she ends up being last and is far less “showy” than the other girls. Yoshikawa points out that she’s sort of plain and meek, but Aoyama is entranced. He asks her out later and they have dinner. 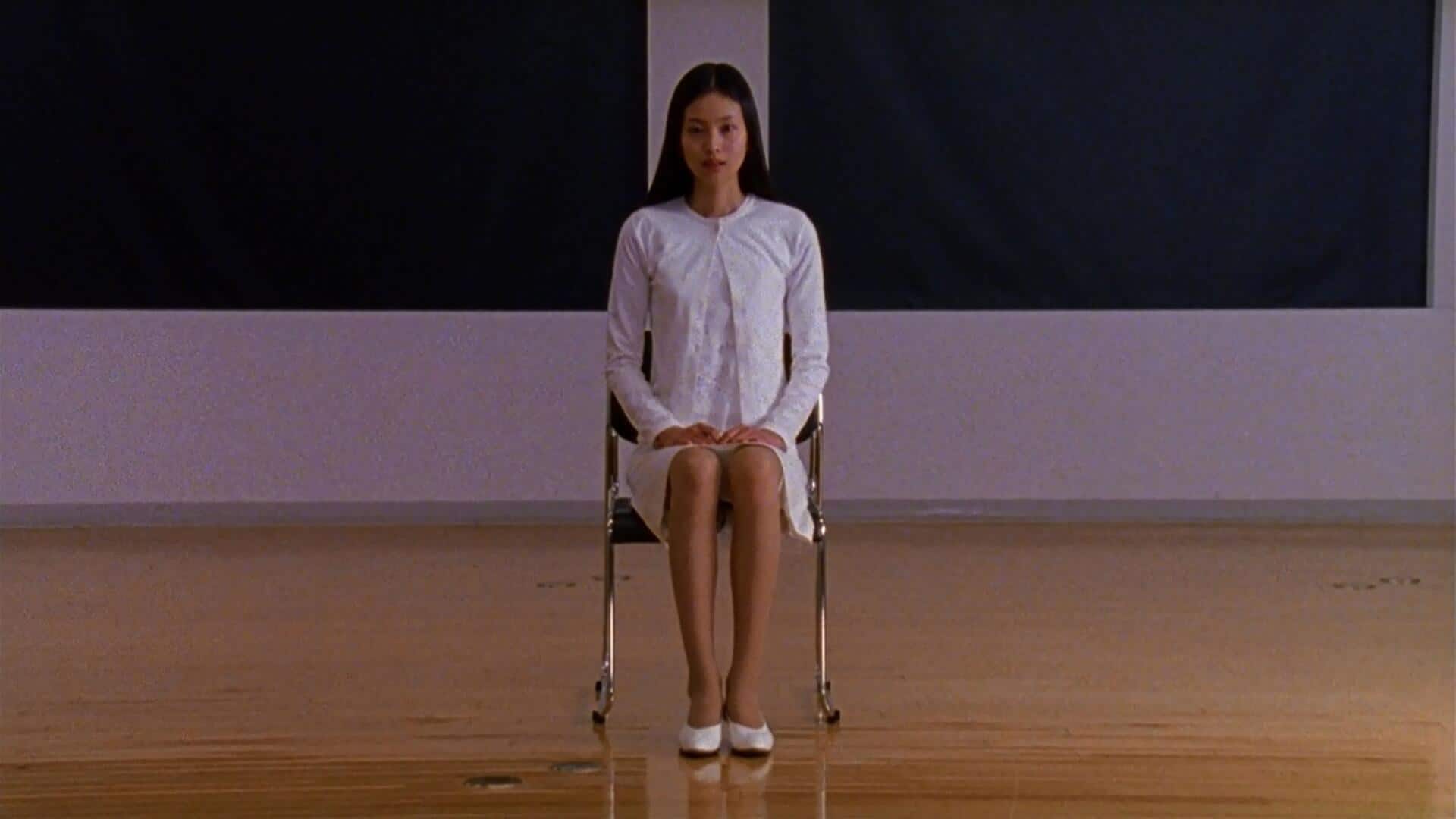 Up to this point, audiences would be forgiven for thinking the movie was a romantic drama, but that’s exactly when the story begins to turn. While trying to play it cool and not call her again right away, Aoyama has several moments where he almost calls and then doesn’t; it’s a pretty common rom-com scene. But Miike shows us what Asami’s doing in that same time frame and it’s sit on the floor of her nearly empty apartment starring at the phone on the ground. Asami’s clearly not as normal as she appears, and this is only compounded when she all but disappears after the two sleep together. Aoyama goes looking into her past and finds a lot of trauma, which ends up being really dangerous for him.

Audition is infamous for its second half, which becomes hallucinatory, then grueling. If you know anything about the movie, it’s probably the prolonged torture scene in which Asami plunges long needles into the chest and undereyes of Aoyama before using a wire saw to cut off his feet. It’s a truly gut-churning sequence, punctuated by Asami’s gleeful smile and coquettish chirping of “deeper, deeper” as the needles go in. But what leads us to that sequence is somehow more troubling in 2019 than it was two decades ago. 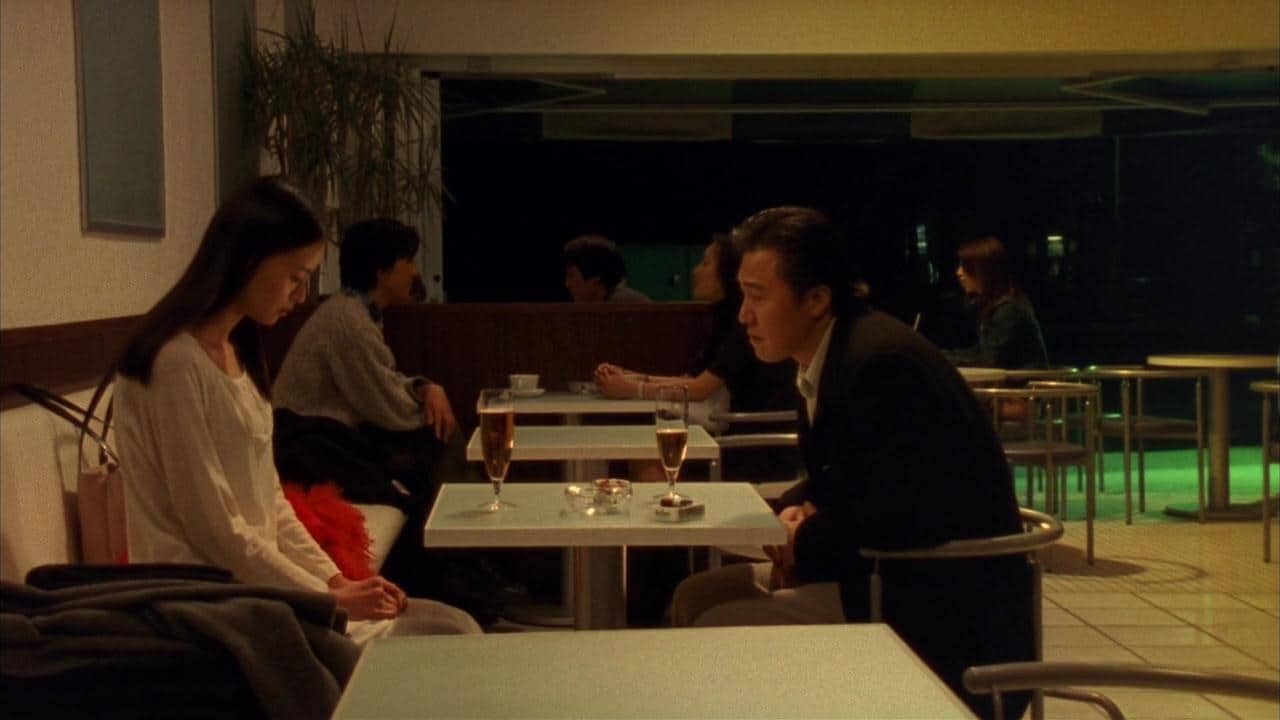 First, we know that while Asami is clearly deranged and homocidal, it comes from years of abuse. Her cruel and sadistic step-father would burn her legs if she didn’t dance to perfection, and this pain is depicted as growing into a sexual fetish for both as she gets older. Her step-father has no feet, and so any man who fails to live up to his word is subject to Asami attempting to physically turn them into her abuser, getting symbolic revenge in the process. She keeps one of her previous victims in a burlap sack in her apartment; without a tongue, feet, or several fingers, this man is forced to eat Asami’s vomit in one of the movie’s most repulsive moments. 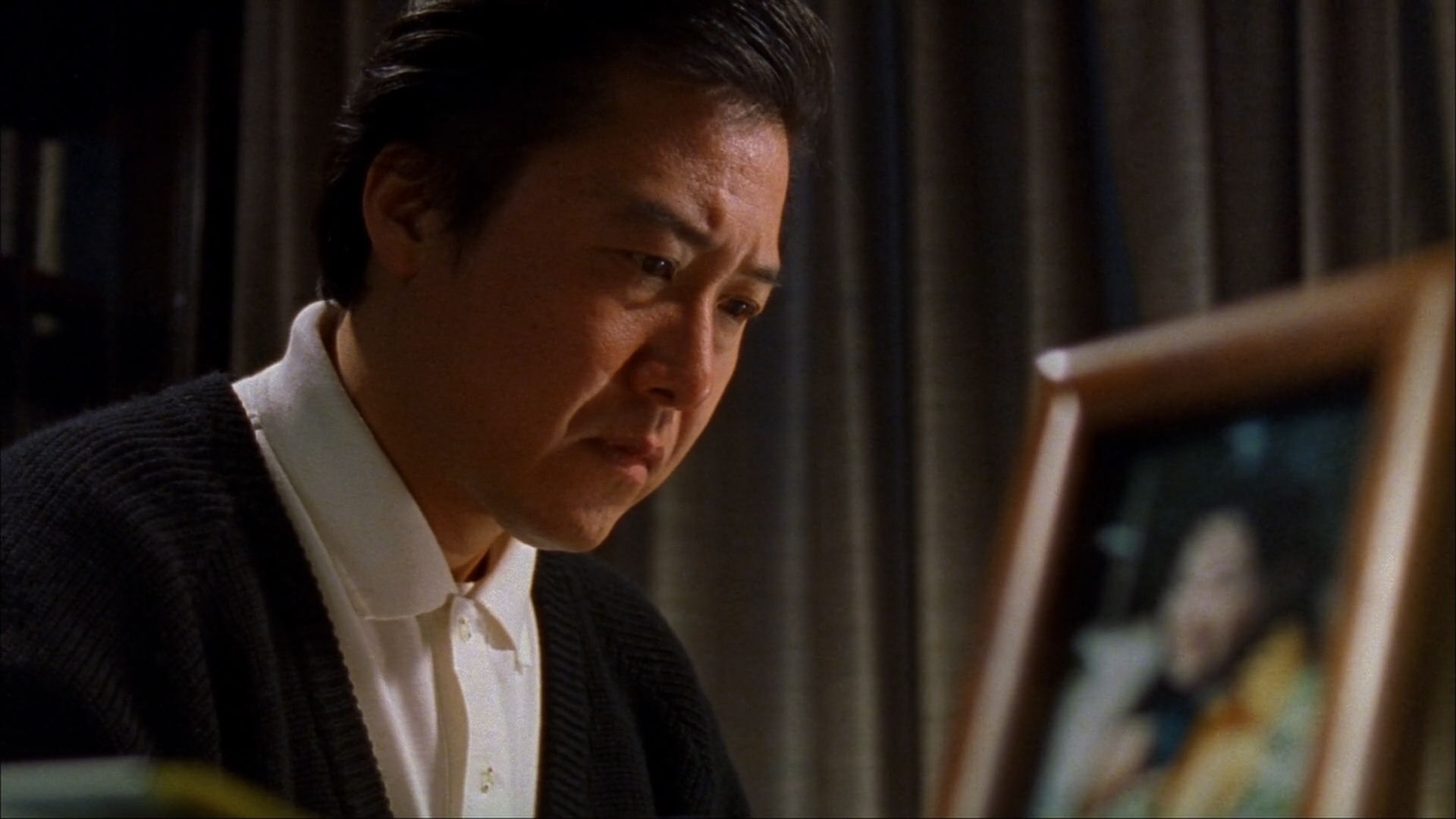 But beyond Asami, we have an ostensible hero in Aoyama who is both a kind and responsible single father and a real creep who agrees to lie to women to get them to go out with him. One can see this same scenario transposed to the internet age very easily, where he’d set up a phony profile on a dating app in the hopes a young lady would swipe left. And Asami is lying as well, hiding her past and her proclivities in the hopes of finding a man who won’t lie to her. She only becomes hostile toward Aoyama when he says he’ll love only her forever without revealing he loves his son and still harbors love for his dead wife. Could this whole thing have been avoided if he’d just been honest with Asami from the beginning? It’s hard to know. 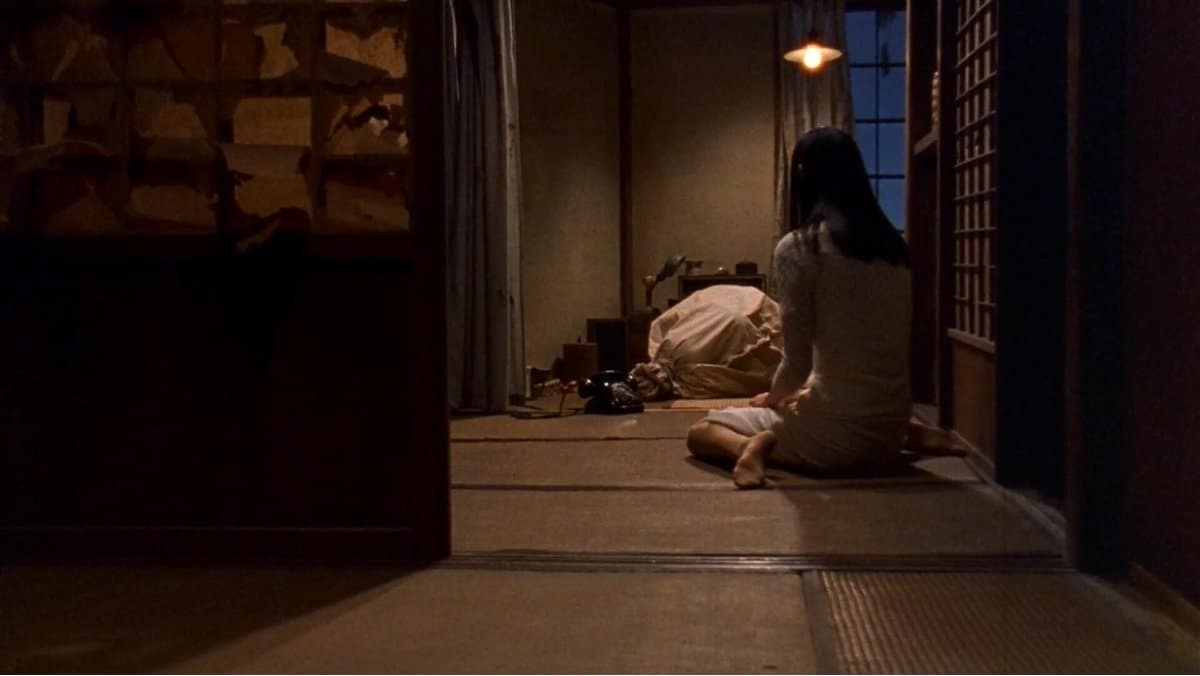 The first time I saw Audition, on home video in 2004, I thought Asami was a terrifying figure in the annals of horror films. Now, watching it 15 years later, I see her as a victim who has fallen into despair and rage and has become the abuser for a sense of purpose. It’s a truly sad case. She’s not a monster, and yet she’s still terrifying. I never expected to sympathize with the grinning mutilator, and yet I did.

Miike is a director known for excesses, and certainly parts of Audition show us this, but it’s a much more nuanced and restrained movie than it could have been. He’s gone on to direct some of the most depraved and graphic films of all time (hello, Ichi the Killer), and yet Audition’s power comes in the characters and feeling the tension of the inevitable explosion and not the gruesome moments themselves.

Audition is out February 12 on a special edition Blu-ray from Arrow. It looks and sounds better than it ever has. If you think you know all there is to know about the movie, I urge you to give it another look, with more wisened eyes.