Asmodee Lets You Take Mysterium On The Go - Nerdist

Asmodee Lets You Take Mysterium On The Go

Digital implementations of our favorite board games are a beautiful thing. While we can’t always squeeze in an entire game night, it’s easy to eke out 20 or 30 minutes to pick up a phone and go head to head with an opponent sitting halfway across the country. Mysterium, a huge 2015 hit, has made its way into the app-driven world and we’re ready to dive in.

Mysterium is a board game about cooperation and conveying information with limited tools. One player takes on the role of the ghost and over three phases must provide clues to the others to choose specific cards in front of them. The cards chosen consist of people, places, and things, framing up the details of a murder mystery that put the ghost six feet under.

The magic of the design is utilizing oddball faery-tale illustrations on the clue cards. Much like Dixit, players decipher meaning from an eccentric piece of art and tie it to the options presented in front of them. It’s like the schoolhouse game telephone with one player at the beginning of the thread and the other at the caboose.

I’m not sure Mysterium would come to mind if I was thinking of designs that would translate well to an app, but it absolutely does. Asmodee comes through with fantastic visuals and atmosphere, layering sound and some nice animations on the experience to interject some theme and presentation. Gameplay is solid and the experience works, but becoming an early adopter does have a couple of minor issues you’ll have to put up with.

The navigation and menus are pretty diminutive on smaller mobile devices. If your eyesight is poor this could prove troublesome. Likewise, there are a couple of bugs here and there such as text that doesn’t come through correctly. One of the scenario conclusions to the interesting single player story mode referenced the code file or variable names in the dialogues instead of the actual text. You’ll also notice a typo here or there in the narrative blurbs. 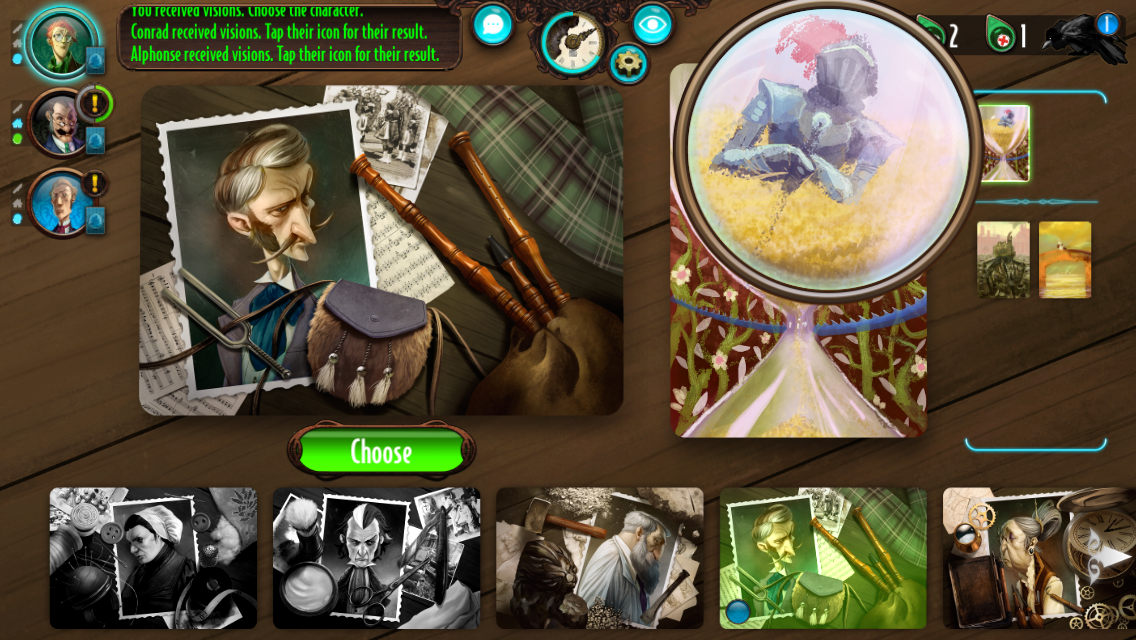 Zooming on the knight in the hourglass.

Asmodee has already addressed many of the problems in patches since our first look at the game. Mysterium runs very smooth and gameplay is a faithful representation of the table top experience. Selecting cards is easy and you can zoom in on specific details if desired. The interface grays out suspect/location/weapon cards that have already been chosen making the process easy to engage with.

Most importantly, the experience hasn’t lost any of the fun. The thought process and interesting deductive nuances of the cardboard version still persist. You have to work through a set of clues while hemming and hawing over which choices to make. When success or failure is revealed for the group it’s exciting as you let out a small cheer or curse the day, all while sitting comfortably on your sofa.

The app also boasts an interesting story mode with a solid narrative. Don’t expect a Sir Arthur Conan Doyle level of writing, but it’s worth experiencing and reading all of the text. The ability to play the game solo is also hugely appreciated. You can go at your own pace and carry on with a campaign style of play with linked sessions at your leisure.

In its current state, Mysterium is a solid implementation and provides some nice features. It will be interesting to see where it goes long-term, with hopefully asynchronous play–something that’s currently missing–and a more malleable menu system with its bugs smoothed out. I wouldn’t let the small issues halt you from diving in now if you’re a fan of this game or wanted to give it a shot before picking up the physical version. Mysterium is a design that offers a light and enjoyable deduction experience, and the app delivers just that through 1’s and 0’s.

Mysterium is currently available on Android and iOS for $5.99.

Are you a fan of digital board games? What about Mysterium? Let us know in the comments below!