Arrow will be ending its long run on The CW with season eight. It means we still have a season with all our favorite characters, with the exception of one: Felicity Smoak. Actor Emily Bett Rickards will not be returning for the final season. We’re pouring one out for you, Olicity fans.

Bett Rickards played Felicity from the beginning of the series. Her performance as the whipsmart, kind of nerdy character made Felicity a fan favorite. And she’ll be leaving with the end of Arrow’s seventh season. Bett Ricards shared the news on Instagram (via io9). She made the announcement (a la the Supernatural stars announcing the end of their series) and said all of her goodbyes via a heartfelt poem, which you can read below:

❤️????? The time has come to talk of many memes. Of bows and arrows and superheroes and Olicity and Queens And why TGA is so damn hot And yes, canaries need more scenes… But wait just one minute before we go and do all that For this makes me out of breath To have this not small chat Felicity and I are a very tight two But after one through seven we will be saying goodbye to you I thank you all for the time we’ve shared The elevators we have climbed The monsters we have faced and scared And The burgers we have dined I will keep her in my heart for always And I hope that you can too Because she would not be alive if it weren’t for all of you ? Love, Felicity and Me

In a statement, executive producers Greg Berlanti and Beth Schwartz said, “We’ve had the pleasure of working with Emily since Season 1 and in those past seven years she has brought one of TV’s most beloved characters to life. And although we’re heartbroken to see both Emily and Felicity leave the show, we’re completely supportive of Emily and her future endeavors. She will always have a family at Arrow.”

The final season of Arrow will run for ten episodes instead of the usual 22. 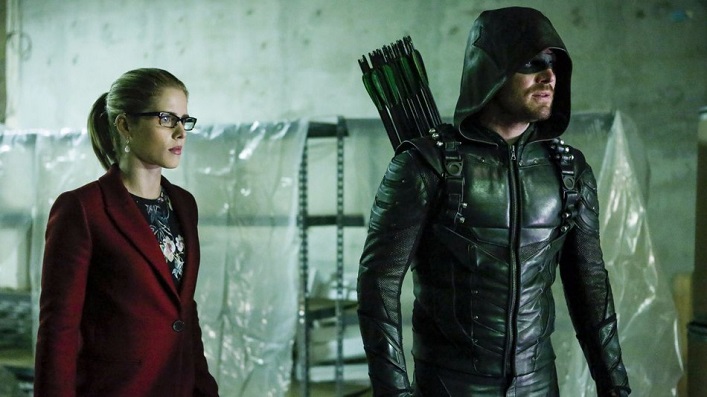 This announcement has many fans speculating that Felicity will face a grim fate at the end of this season. She’s an integral part of the series. It seems highly unlikely she will just walk off into the sunset before Oliver Queen has to face whatever final challenges await him in the final stretch of episodes. If she dies, it would have significant ramifications on Oliver. But let’s hope she’s not fridged and used solely to further a season-long arc for Oliver.