Are You Ready To Sing the SPEAKEASY BLUES? - Nerdist

Are You Ready To Sing the SPEAKEASY BLUES?

Prohibition is my favorite era in modern American history. It’s a study in the contradictions that hold our country together. Criminals glamorized while cutting each other down in brutal gang warfare. Citizens taking a moral stand and then quietly breaking the law to keep doing what they like doing, and acting like the party will never come crashing to an end.

Speakeasy Blues, designed by Daryl Andrews and Adrian Adamescu (who also designed G&S 2017 Best of the Year game  Sagrada), jumps in with both feet in the middle of the era with a game that requires a little luck, a clever mind and the ability to improvise like Louis Armstrong on the trumpet. Each player is doing their best to run a speakeasy in New York during the era and must do their best to attract the rich, spend their ill-gotten gains and stay one step ahead of the cops.

The game combines three main elements for its trip to the Jazz Age.  It’s a dice drafting game with worker placement elements as the main mechanic and set collection for scoring. At the start of each players turn, they roll a pair of colored dice and add them to a pool. Each die corresponds with one of the actions the player can take during the worker placement phase. the player chooses two dice of the same color, not always the ones they rolled.

This choice is further restricted by limited slots for each action which pushes the player into choosing good but not perfect actions for their turn. More often than not, one of the dice the player needs is perfect and the other part of the pair is slightly useful. There’s still some flexibility for players stuck with actions that are either all blocked off or not useful at all; that’s usually a good time to throw a soiree and rack up some victory points. This mechanic keeps players from falling into a rut that worker placement games sometimes encourage. It also makes those turns where the perfect action combo falls into place that much sweeter.

Players can also open up their options by recruiting famous personalities to come to their speakeasy. Each one of these folks offers a benefit to whoever lures them through the door either as a one time bonus or as an extra action type for one of the faces of the dice. The trick, though, is to keep the hooch flowing; you can’t get “Jelly Roll” Morton to come to your joint if you don’t have that sweet, sweet booze handy.

In addition to the actions from dice, players can seek out personalities to up their game. Drawing from the crime deck usually puts a cruel criminal on the player’s payroll. They can reveal their crime card and hurt one of the other players. The cops are around, of course…and are the other half of the crime card deck. You won’t know if that crime card another player is holding might be a cop that will negate your criminal action until it’s too late. The cop and crook cards give the game a much-needed interaction element that many worker placement games miss. It also often triggers a chain reaction of players sending hitters after each other, which feels very authentic.

Set collection is the name of the game for racking up victory points and winning the game.  Players do favors for the various crime families (or the cops) and get points at the end of the game for how much that faction owes them. There’s also the collections that end up in each speakeasy that are the real big winners of each game. You’ll be collecting fancy cars, racehorses, yachts and other signs of the decadent wealth of the 20s. the more of each type you have, the better off your score. This was the one area of the game that didn’t flow quite as smoothly as the others. Most of our players didn’t quite grasp the importance of it the first play and got turned off by how much they lost by to not come back for a second round. Those who did found their later games to be much tighter. 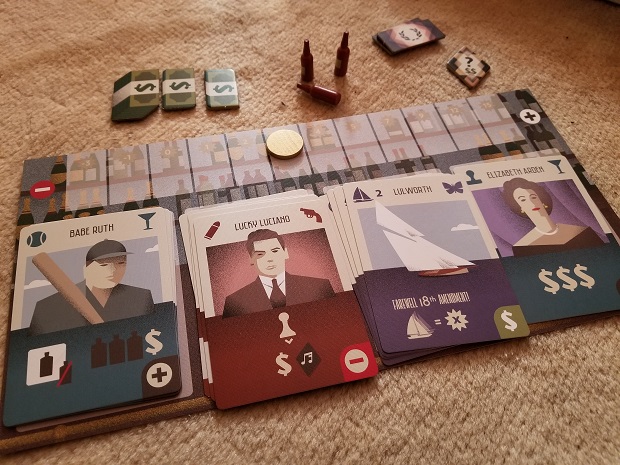 Artana put a lot of effort into the presentation of the game and it shows. The art-deco lines and iconography offer an artifact feel to the game. Hooch is represented by little bottles that clink together in a satisfying manner. The feel of the game makes it each for players to put on their best mobster accents and also might inspire a bit of learning. The personalities and speakeasys referenced in the game are real and we often spent a little time looking up the historical figures we were entertaining and figuring out how their history affected their influence on the mechanics.

Speakeasy Blues is a great game for people who love the era, like worker placement games that don’t always fit together like a puzzle and games that offer variable starts and finishes to the experience. Every play unlocked a little more of the strategy and the game was short enough that it often encouraged two or three plays right in a row. The only thing missing was a toast of bathtub gin at the end of the night.

What is your favorite historical game? Let us know in the comments!

Review copy provided by the publisher.