Build to Impress the King in ARCHITECTS OF THE WEST KINGDOM

As a noble architect in the West Kingdom, you construct various landmarks throughout the king’s new domain at the end of the Carolingian Empire, circa 850 AD. Your rival architects, however, have the same goal in mind. Who will remain virtuous in their quest? And who will operate surreptitiously, working with thieves within the black market?

In  Architects of the West Kingdom from Renegade Game Studios, players attempt to earn the most victory points through erecting buildings, working on the cathedral, and advancing their place on the virtue track. While wheeling and dealing in the black market can help you cut costs and avoid paying taxes as you build within the kingdom, being the most virtuous is the overall tiebreaker. Choose wisely with whom you associate!

Each turn, players use the worker placement mechanism made popular by games like Lords of Waterdeep, Stone Age, and Agricola. Simply take one of your workers, place it in a space on the board, and perform the action listed.

What separates Architects of the West Kingdom from other worker placement games, though, is that most action spaces allow any number of players to be there. If you and/or your opponent already occupies a space, it doesn’t prohibit you from going there. In most cases you’ll receive additional benefits for having workers already there; for instance, go to one of the resource-gathering locations and you’ll get additional resources depending on how many workers you have in that location.

Of course, your opponents are also getting those same benefits as their workers pile up in locations, and here’s where the fun of the West Kingdom happens. By going to the Town Centre, you can capture workers from another space, putting them on your player board. You can then send them to prison, which earns you money. Send those troublemaking opponents where they belong! 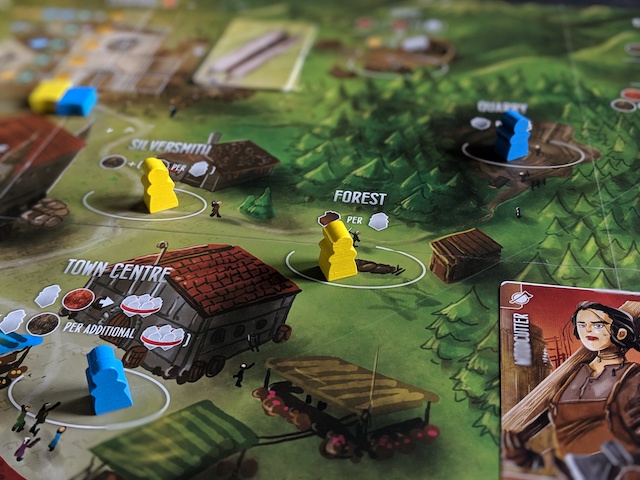 You’ll have to manage your resources carefully and hire apprentices that give you additional actions or abilities. With the right combination of workers and apprentices, you’ll be able to head over to the Guildhall to help build the cathedral. This is the main building in the West Kingdom and you’ll score points and earn rewards for your efforts.

For those that dare wander into the black market and take a shortcut past those who do honorable work, you’ll be rewarded with better access to gaining resources and hiring apprentices. Of course, you’ll have to lose virtue, but as long as the king doesn’t know, who cares, right? Be careful, though: too little virtue prevents you from working on the cathedral. Likewise, the more virtue you accrue, the more debts you can pay off.

Watch the game in action with Becca Scott on  Game the Game!


Learn more about Architects of the West Kingdom on Renegade Games’ website and ask for it at your friendly local game store.

Ruel Gaviola loves board games, books, food, travel, Star Wars, and date nights with his wife. He writes about games for iSlaytheDragon, podcasts about games for The Five By, and his name rhymes with Superman’s Kryptonian name. Follow him on Twitter and read his blog here.