Anthony Mackie Is Getting Major News From Everyone Except Marvel - Nerdist

Anthony Mackie Is Getting Major News From Everyone Except Marvel

There are some obvious benefits to being a  Marvel Avenger. You get to star in the biggest movies in the world. Work involves amazing costumes and running around incredible sets. On any given day you might also pull off a mind-blowing stunt or learn choreography for a memorable fight scene. The pay probably isn’t too bad either. But there’s one bonus that seems like it would be totally surreal: seeing your very own action figure for the first time. Especially when that happens on broadcast television, like it did to The Falcon and the Winter Soldier‘s Anthony Mackie with his new Captain America toy.

But that might not be as weird as learning about your next movie from a fan.

The MCU’s new-new Captain America virtually joined Stephen Colbert as a guest on The Late Show. The two discussed Mackie’s experiences filming The Falcon and the Winter Soldier and how his own experiences shaped the characters. The Marvel star also talked about getting into shape for the role. (Which ironically meant creating a “Dorito” body. Apparently I’ve been creating my own Dorito body incorrectly all these years.) He also discussed what it means for a Black actor to take up the mantle of Captain America.

But, despite starring in the world’s biggest franchise, Anthony Mackie had yet to see his own Captain America action figure. It was Colbert who surprised Mackie with his first glimpse of the toy. It’s pretty awesome. Minus the part where Mackie accurately pointed out it looks more like Jamie Foxx. 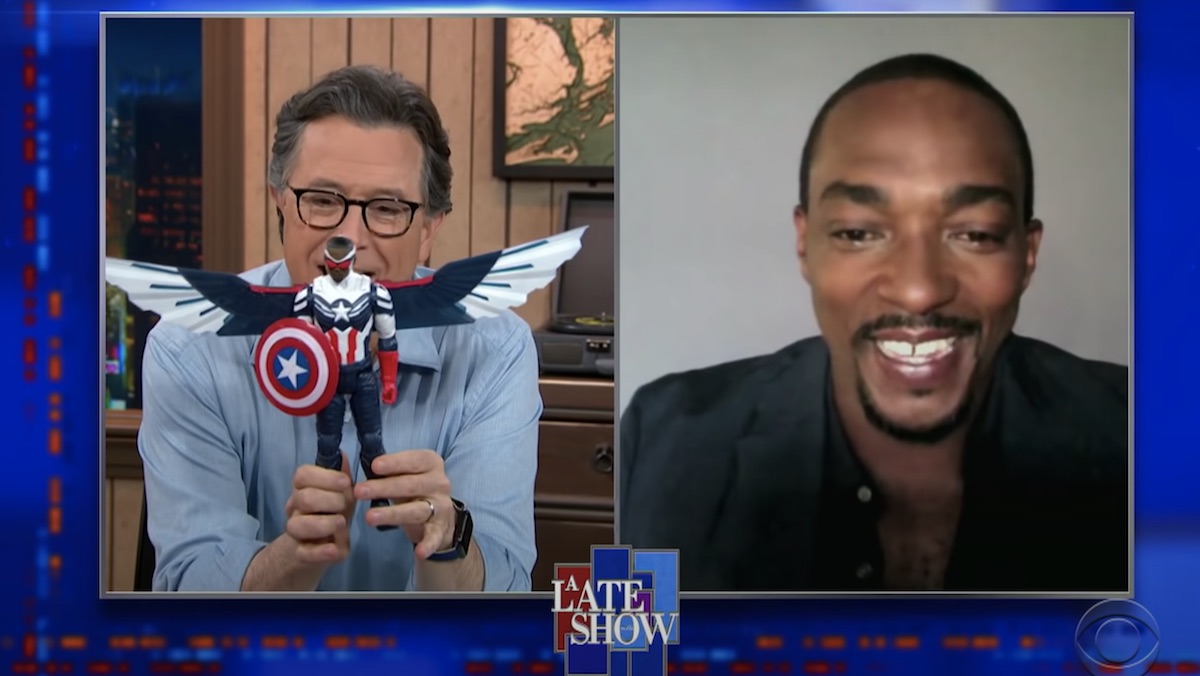 As funny as that was, it might not even be the most ridiculous revelation Mackie has heard from an unlikely source since the show’s finale. He told Entertainment Weekly a fan in a grocery store first told him about Marvel’s plans for a fourth Captain America movie.

Does Marvel not have Anthony Mackie’s email address or cell phone? And would it kill them to send their new Captain America a Captain America toy before someone else gets them? There are a whole lot of benefits to being an Avenger. But apparently a “heads up” isn’t one of them.