In January of last year, game designer and “horror memelord,” Paul Hubans, released a video of his grandmother, Audrey, showcasing her village in Animal Crossing: New Leaf. The video of Audrey showcasing her village—which at that time had received more than 3,500 hours of attention from its loving 87-year-old steward—earned an outpouring of support from the internet, as well as 11 million views. Now, Paul and his grandmother are back, and this time the latter is unboxing Animal Crossing: New Horizons and a brand new Nintendo Switch.

In the video, Paul says the Nintendo Switch Audrey (or “Audie,” as she’s often called), is opening was purchased thanks to cash raised by a recent GoFundMe fundraiser he successfully completed. The fundraiser was so successful, in fact, that Paul was able to purchase the New Horizons version of the Nintendo Switch, which has a hefty price tag, but some gorgeous pastel colors and a cute little player island on its side. 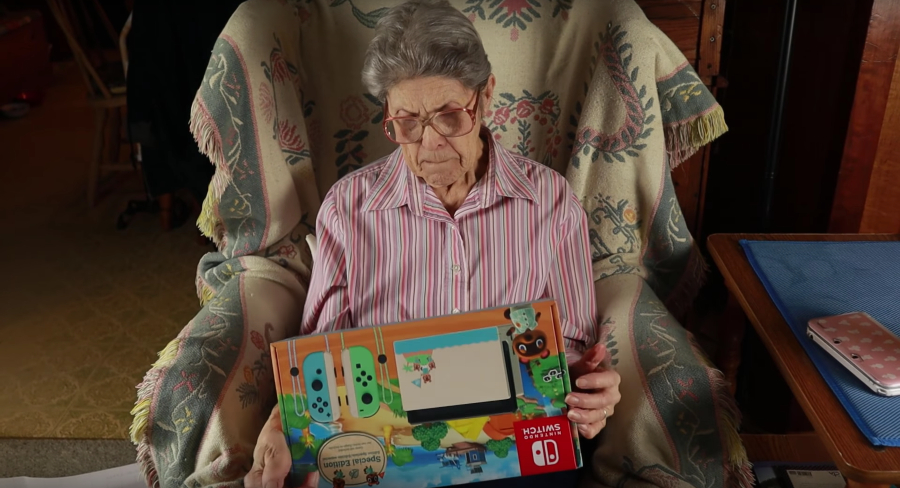 As of April 2 of this year, Audie had added roughly 800 hours to her overall time spent playing Animal Crossing: New Leaf on her Nintendo 3DS, but even her cumulative total of 4,300 hours may pale in comparison to the amount of time she’ll spend playing New Horizons on the Switch.

After a long Q&A with Audie, in which she answers questions that had been offered up by YouTube viewers, she unboxes her new Switch, and gives New Horizons a whirl. As her grandson helps her explore her nascent island, and visit all of the NPC villagers, it’s easy to see how happy Audie is. It’s “like having a doll house, but more fun to play with,” Audie says about Animal Crossing. She adds that “the only thing I don’t like is [that] some of those animals get kinda sassy.”

My grandma slept in late today. I asked her if everything's okay and she said she was up until almost 1 AM. "It took me forever to get through all those comments," she said. She stayed up reading all of the comments on her latest YouTube video 🤣

For anybody looking to visit Audie in-game, unfortunately, it doesn’t seem like she’s having visitors over yet. But there is a lot of speculation that a new NPC animal in the game named Audie may, in fact, be a tribute to Audrey from Nintendo. You can also still visit Audie in Animal Crossing: New Leaf, because she says she’s still going to take care of her village in that game too.

What do you think about grandma Audrey unboxing New Horizons and a brand new Nintendo Switch? Do you think your grandparents would like the Animal Crossing world just as much as this 88-year-old gamer does? Let us know your thoughts in the comments!