Aliens Vs. Predators Vs. Superheroes Vs. Vampires And More - Nerdist

“Whoever wins, we lose.” That’s the lesson we learned from the 2004 Alien vs. Predator film, the biggest and most well-known crossover between the Alien and Predator franchises. And while the movie going public may only know of the two AVP films, there is a rich history of the two species meeting and fighting in comic books, novels, and even collectibles.

We did our own “Aliens vs. Predators” game on the HeroClix/HorrorClix show Group Hug last week to finish out our month-long depiction of monster battles, and today we’ll look at the complex history of these franchises’ crossovers to see just who wins when Aliens mix it up with Predators, Batman, Superman, Judge Dredd, Green Lantern, Tarzan, Vampirella, Archie, and more! 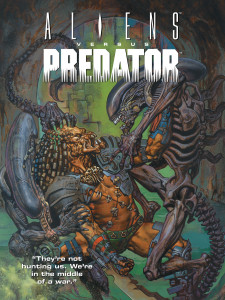 In the late 80s, Dark Horse Comics began to publish books based on Aliens and Predator individually, and soon after in 1990, the great minds there brought them together like chocolate and peanut butter. Dark Horse Presents #36 (February 1990) started it all with the tale of Predators hunting Aliens on the human colony world of Ryushi. This story is notable for a Predator giving a mark of recognition to a human woman, Machiko Noguchi, for her contribution in the fight, something that would appear in the first AVP film 14 years later. Machiko was the sole survivor of the battle in this series, so the crossover began with Aliens – 0, Predators – 0.

After the success of the Aliens versus Predator comic, Dark Horse would return to the well frequently over the years with sequels involving those two franchises in stories called Deadliest of the Species, War, Booty, Eternal, Xenogenesis, Thrill of the Hunt, Civilized Beasts, Three World War, the recent Fire and Stone, and more. Like the original comic book most of these storylines end in some sort of draw or hint at an ongoing conflict that may never end between the two species. But what happens when a superhero, street judge, or the like get involved? 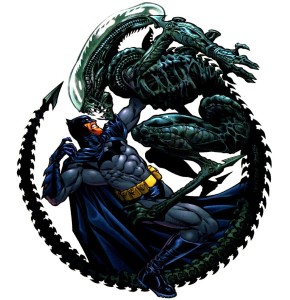 Just one year after Aliens first fought Predators in the pages of Dark Horse Presents, a partnership between Dark Horse and DC Comics brought readers to Gotham City where a Predator on the hunt was confronted and stopped by Batman. Twice more the Dark Knight would face Predators, and Batman wasn’t the only DC character crossing over into Dark Horse’s tales of alien creatures.

In 1995, Superman vs. Aliens took the Man of Steel to the stars and directly into conflict with the Alien species just as his powers were depleted from a lack of yellow sunlight. With the help of other survivors, he was able to save the day though he would face Aliens again in the 2002 sequel God War (featuring Darkseid utilizing the creatures as his own personal army and assassination device). Aliens made it all the way to Earth in 1997’s Batman/Aliens crossover which featured Bruce fighting the creatures in a South American jungle and volcano, though things would get really crazy in the 2003 sequel with Xenomorph/supervillain hybrids! Between 2000 and 2007, DC and Dark Horse kept the party going with Green Lantern versus Aliens, Superman vs. Predator, JLA versus Predator, and the big daddy of them all, Superman and Batman versus Aliens and Predator! 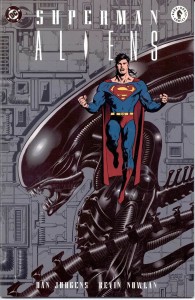 Our two favorite spaceborne threats didn’t just bother the heroes of the DC universe, but also stopped off for some fun at Valiant for 1994’s Predator versus Magnus, Robot Fighter, U.K.’s Fleetway Publications for 1997’s Predator versus Judge Dredd, Image for 1998’s WildC.A.T.s/Aliens, Top Cow in 2000 for Witchblade/Aliens/The Darkness/Predator: Mindhunter and its sequel, and Rebellion Developments in 2002 for Judge Dredd versus Aliens: Incubus. In-house crossovers, meanwhile, have included 1995’s Hunting the Heroes: The Predators Attack series of one shots featuring Agents of Law, Ghost, Motorhead, and X, 1996’s Tarzan vs. Predator at the Earth’s Core, and in 2000 the crazy space adventures of Aliens versus Predator versus The Terminator. The wackiness continues to this day as 2015 has seen the insane crossover of Archie versus Predator (Archie Comics) and even Vampirella/Aliens! You just never know who might run into an Alien or a Predator next. 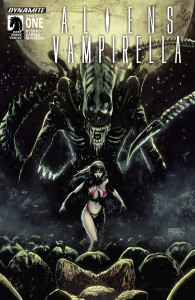 Beyond the comic books, Aliens have fought Predators in a series of novels that stem from the original comic storyline following Machiko Noguchi as she survives a battle between the two then joins a Predator clan and ultimately chooses humanity over extraterrestrials. As noted above, the most famous interactions happened in the two films, 2004’s Alien vs. Predator and 2007’s Aliens vs. Predator: Requiem. The first takes place in Antarctica where archaeologists disturb an Alien-generating temple used by Predators for hunts on Earth. The hunters are notified and arrive from space, and three Predators are chosen from their ship to land and hunt. In the process of eradicating the Aliens the Predators, who all die, are helped by Alexa Woods, an Arctic guide and fierce warrior who receives a Predator’s “blessing” and ceremonial mark like Noguchi in the comics. Requiem follows directly after AVP with an Alien hatching on the Predators’ ship resulting in it crashing in Colorado and creating more Aliens. A single Predator comes to Earth to wipe out the Aliens, and as usual there are humans involved and the mutual annihilation of the otherworldly species (are you seeing a trend?). 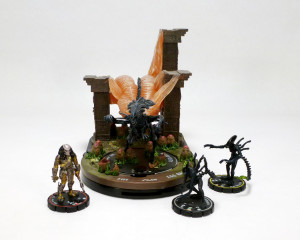 Aliens fighting Predators have also been featured in video games and toy lines, both of which have been inspired by the films, comics, and original stories. On Group Hug we even played an awesome game of Aliens vs. Predators using the figures produced for the game HorrorClix! The out of print game included three expansions based on the first AVP film: a box set of Aliens, a box set of Predators, and a colossal Alien Queen that can be played with her even larger Egg Base or on her own. See the video at the top of this page to find out who won and who was eradicated! 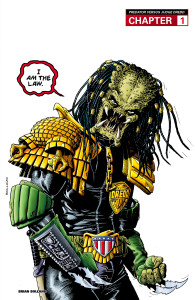 Which crazy crossover mash up of Aliens and Predators is your favorite? Let us known in the comments and tune in to Group Hug every Friday at 4pm Pacific on Geek and Sundry’s Twitch channel for live HeroClix games with fun special guests!