I’ve been getting way into Spanish horror films lately, and they’re really a treasure trove. A lot of the ones from the ’60s and ’70s follow in the footsteps of Italian Gothic and giallo cinema, but are seemingly freer to explore the more existential, hallucinatory, and depraved. Spain was fascist longer than Italy, and in order for the Spanish film industry to do horror, the movies had to take place anywhere else but Spain. But after Generalissimo Franco’s death in 1975, Spain could be the site of scary stuff.  And it’s here that we begin our discussion of cult director Álex de la Iglesia.

De la Iglesia isn’t a household name, even among most horror buffs, but he absolutely should be. You’ve maybe seen his more recent films, The Last Circus or Witching and Bitching. His output beginning in 1993 combines his comic book art background with themes of extreme violence, blasphemy, dark comedy, and folk lore into something uniquely fascinating. Severin Films have recently release two early de la Iglesia films on Blu-ray and UHD. They are wholly engaging and yet undeniably repelling. Just like all good horror should be! 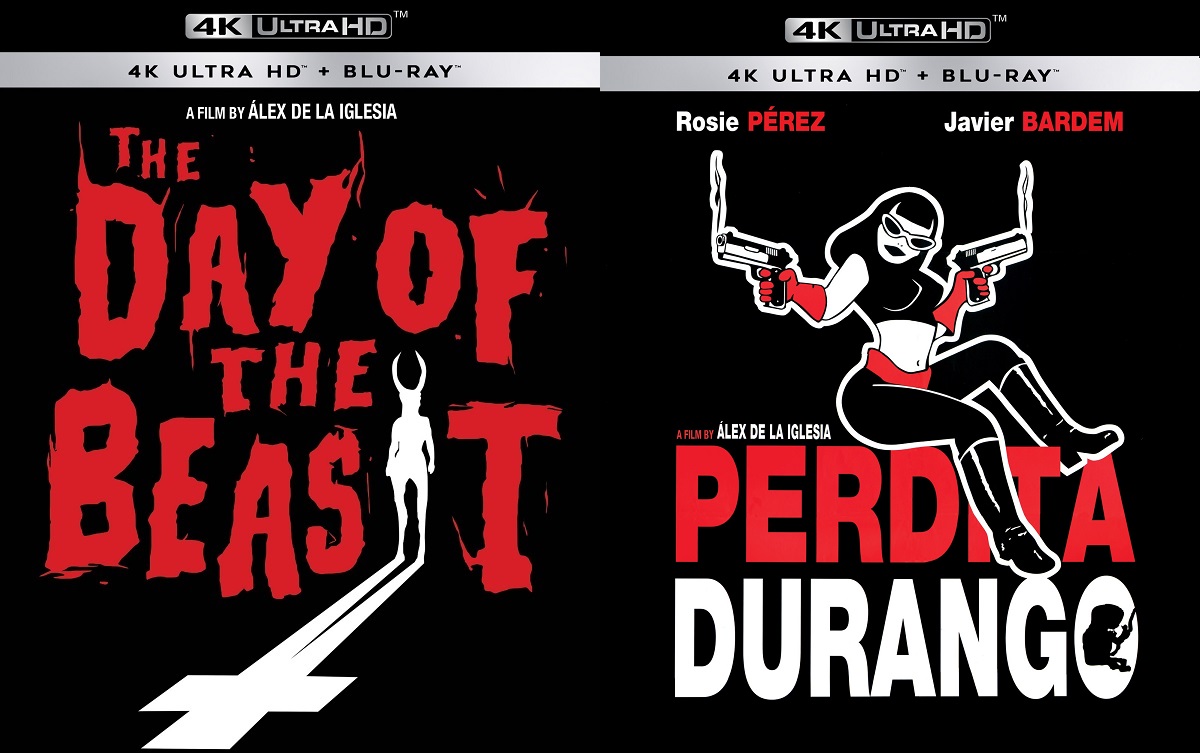 The two movies in question, on the surface, could not be more different. 1995’s El dia de la Bestia (or The Day of the Beast) is a pure black comedy about the devil and the end of the world. 1997’s Perdita Durango (released later on American video as Dance with the Devil) is a sprawling crime movie featuring kidnapping, drugs, ritual sacrifice, murder, and black market human fetuses. Wild stuff, man. But in each, the director explores themes of letting go of social norms and the hypocrisy of modern life. Which is fairly heady for the kinds of movies they are.

The Day of the Beast has become something of a fable among the horror community. “You gotta watch this one” is a common refrain from those who’ve partaken. It’s certainly unlike anything else coming out at the time. It follows a Basque priest and theological scholar named Angel (Álex Angulo) who has determined the Antichrist will be born in Madrid on Christmas Eve. In order to avert it, he has to be in Satan’s presence. So he has to commit as many acts of evil as he can. Real fast. 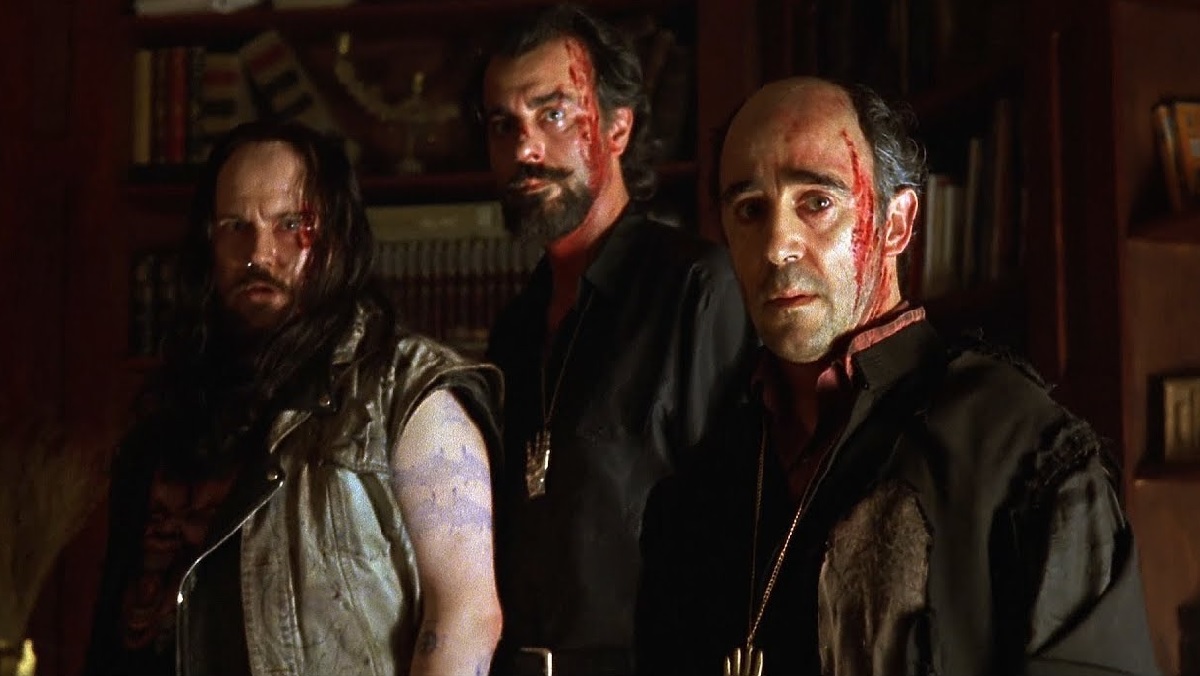 The city of Madrid in the movie is falling into a form of nihilistic chaos; a gang of seemingly upstanding people are murdering and setting fire to unhoused people. They spray paint the slogan “clean up Madrid” over their bodies. It’s bad stuff. Angel’s evils are not as bad as that. Although he does push a street performer over, take money from a homeless man, and tell a dying man he’s going to hell. Some pretty rough stuff for a priest. 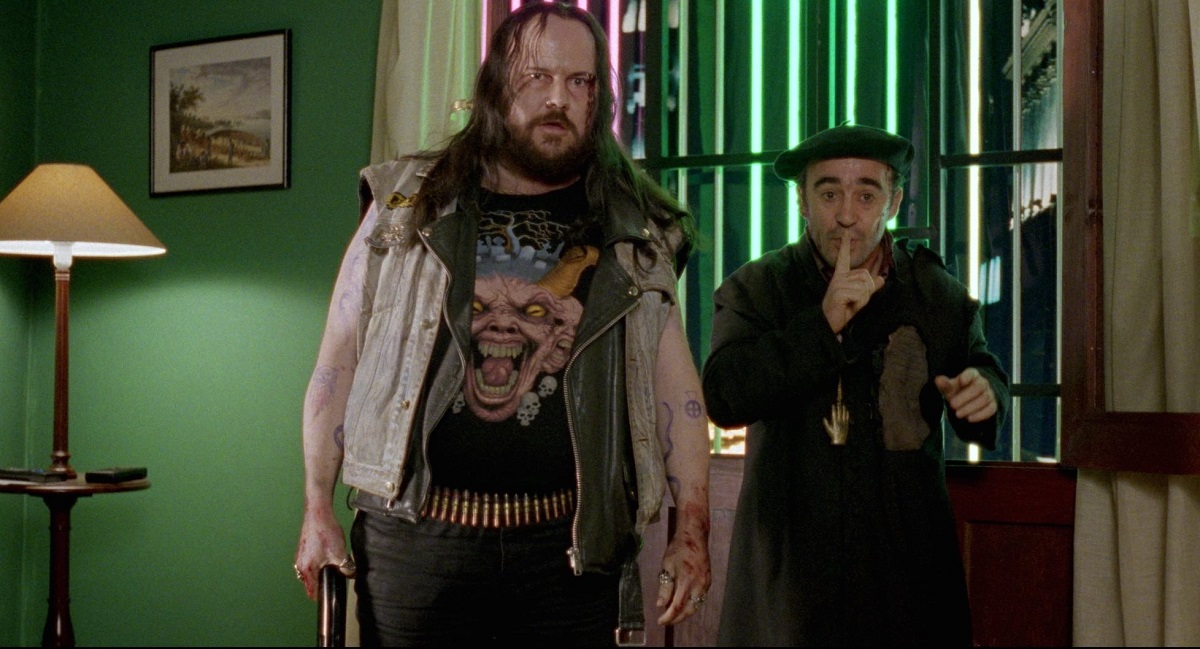 Angel finds help in the form of Jose Maria (Santiago Segura), a record shop employee and death metal enthusiast. Together they decide to seek aid from Professor Cavan (Armando de Razza), a flashy Italian TV psychic and Nostradamus type currently in town. Cavan doesn’t believe any of his own predictions, or anything Angel claims. He refuses to help, so the priest and the metalhead take him hostage. They decide to perform a ceremony to commune with Satan and take LSD. They do end up seeing a black goat in Cavan’s apartment. But did they really? And when they eventually see the Devil himself… it’s not entirely clear if it’s real. 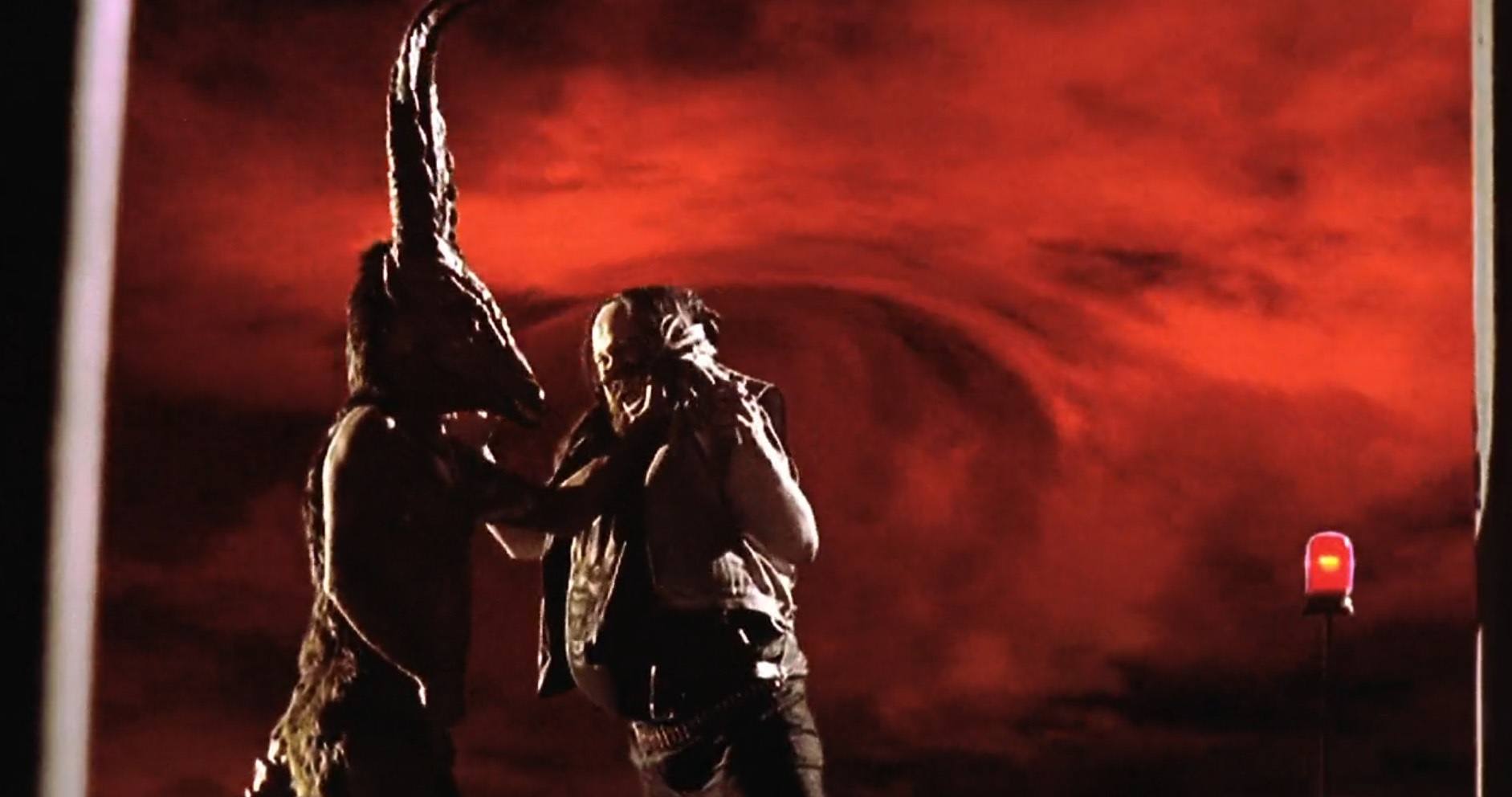 Given The Day of the Beast‘s reputation, I actually expected it to be *more* depraved. Like, the priest does some bad stuff, but his heart is still good, so I feel like that morally eases some of his guilt. Sure, he does drug a woman to steal her virgin blood, but it was to save the world and stuff. But I need to remind myself that this was only 20 years removed from fascism and the country was and is still staunchly Catholic. The image of a priest, in frock and collar, doing such evil deeds must have been shocking. More so even because it was played for laughs.

What the movie does offer is a surprising amount of heart. Angel is an inherently lovable figure, despite his intentional evil deeds, and his friendship with Jose Maria is legitimately sweet. Even Cavan, who at first seems like a total d-bag, becomes something of a sympathetic figure as the movie goes on. So despite de la Iglesia’s best efforts, he made a nice movie. I mean, his name does mean “Alex of the Church” after all. 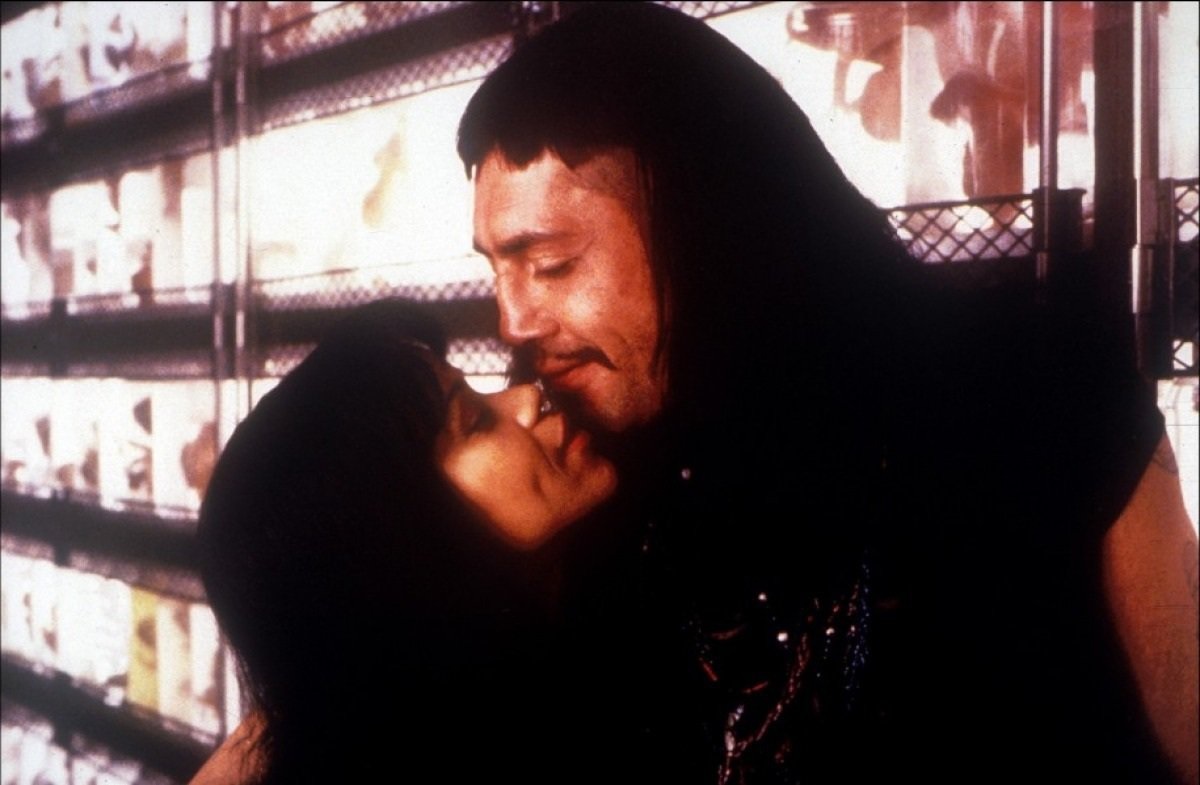 Perdita Durango is another matter entirely. While Beast was a relatively small Spanish/Italian coproduction, Durango was a big budget U.S.-Mexico-Spain affair. It’s an adaptation of Barry Gifford’s 1992 novel 59° and Raining: The Story of Perdita Durango, itself the sequel to Wild At Heart which David Lynch had adapted in 1990. At one point the likes of Bigas Luna and Pedro Almodóvar were going to direct before eventually settling on de la Iglesia. This was de la Iglesia’s big chance to make an American movie, largely in English. But the movie was so raw and the content so extreme that it never saw a theatrical release in the States.

Before going further into the plot, I need to give a Content Warning for rape and sexual assault.

Every piece of crime fiction of the ’90s seemed dead-set on out-shocking the last one, through extreme violence or situations. Perdita Durango might be the apex of that. Rosie Perez stars as the titular character, a nihilist who has gone to Mexico to scatter her dead sister’s ashes. While waiting at the border, a violent bank robber named Romeo Dolorosa (Javier Bardem) approaches her and the two very quickly begin a tawdry sexual relationship. Romeo ostensibly robbed the bank to pay off a debt to loan shark “Catalina” (Demián Bichir) but after meeting Perdita, that goes out the window.

Romeo is nothing short of a nightmare. In addition to just general illegal activity, he also runs a scheme pretending to be a Santeria priest and does sacrificial ceremonies where he snorts cocaine, hacks up corpses and animals, and spits blood on the people who’ve paid for his services. This is one of Bardem’s earliest English language performances and it absolutely prefigures his later career playing psychopaths with horrible hairstyles. 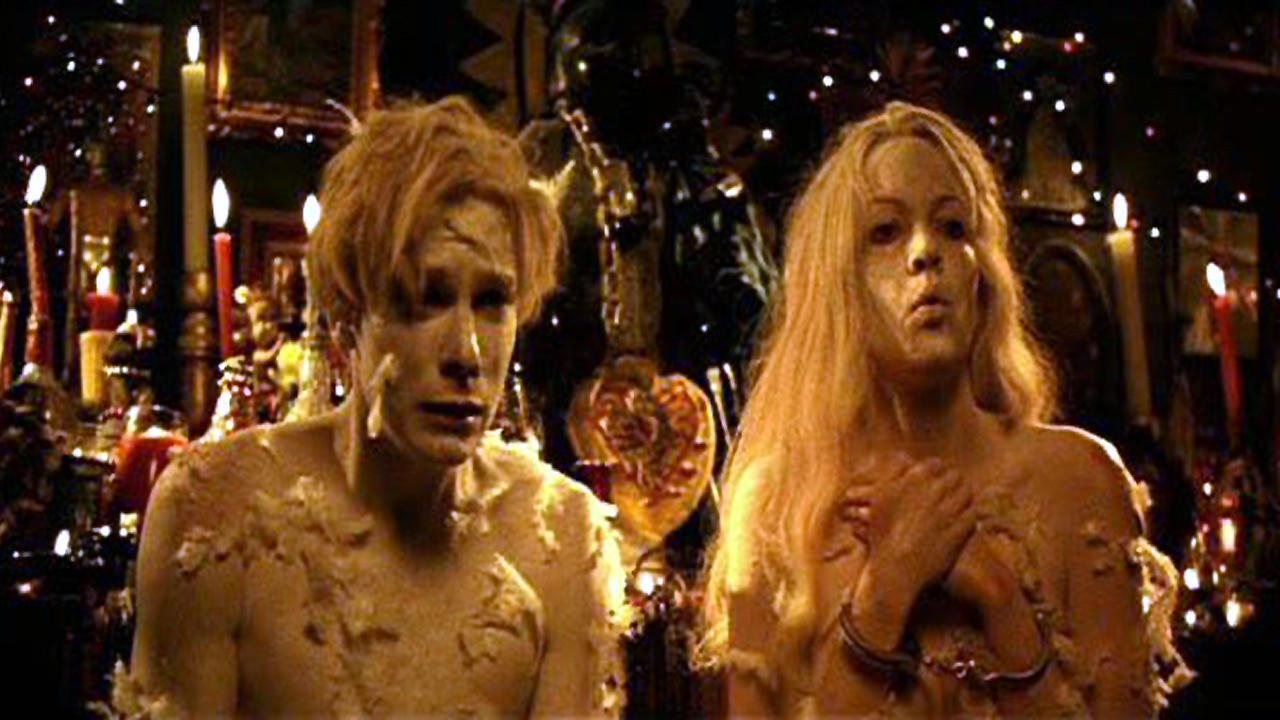 In addition to all of this, Romeo and Perdita decide to kidnap geeky college student Dwayne (Harley Cross) and his girlfriend Estelle (Aimee Graham) at random. They proceed to rape and torture them, ultimately culminating in an attempted ritual sacrifice. This is only thwarted because Romeo’s former partner chooses that moment to seek revenge. Perdita and Romeo flee with their captives to get to the rendezvous spot for yet another wrinkle in the plot. Crime boss Santos (Don Stroud) wants Romeo to drive a refrigerated truck full of human fetuses to Las Vegas for use in cosmetics. DEA agent Dumas (James Gandolfini) is hot on their heels.

There’s no two ways about it, Perdita Durango is a tough watch. De la Iglesia hewed very close to Gifford’s original novel, and the author himself admits that he was channeling the darkest parts of his psyche when writing. Like Wild at Heart before it, Perdita Durango goes so dark with the crime genre that it becomes horror. But also like the previous movie, it’s about star-crossed lovers who seem to have a true respect and genuine feeling for each other. Somehow. De la Iglesia doesn’t shy away from any of the depraved actions of Perdita and Romeo; that’s ultimately why the movie didn’t see the wide release it would have otherwise.

But despite the content, it’s a fascinating and rewarding watch. Rosie Perez is absolutely on fire in this role, which could easily have been overshadowed by Bardem’s enormous and much more gleefully evil character. But Perdita is a deep and deeply tragic character who, despite engaging in horrible acts, achieves a kind of heroic status by the end. Romeo, too, but I think it’d be hard for any audience to truly embrace Romeo in 2021. He’s an icky guy.

These films from Álex de la Iglesia are not for the faint of heart, but they speak to what I love about Spanish film. They explore themes in a much more unflinching way than films from other countries. Even their takes on American cinema feel heightened and edgier. In a world where True Romance and Wild at Heart exist, somehow Perdita Durango manages to make them look tame. And the examination of outright blasphemy in The Day of the Beast reflects the everyday horrors of people in an unfeeling modern society. And they both ultimately get to the heart of even the most seemingly heartless characters you could imagine.

They’re not over the top; Álex de la Iglesia’s cinema has no top.

The Day of the Beast and Perdita Durango are available now from Severin Films.