Alamo Drafthouse has over 60,000 original letterpress plates that were used to create newspaper ads for movie from the 1930s to the 1980s. Now they’re turning some of those vintage items into an amazing new line of merchandise for fans, with their new and ongoing The Press Room Collection. And it’s kicking off with T-shirts, puzzles, coasters, wrapping paper, and more, including a very special limited-edition poster curated and autographed by kung-fu superfan RZA of the Wu-Tang Clan.

The collection’s launch, the result of over three years of work by Alamo Drafthouse founder and Executive Chairman, Tim League, precedes the grand opening of the cinema chain’s new The Press Room locales that will serve as a “museum, letterpress print shop, bar, and event space set to be located at Alamo Drafthouse’s upcoming Lower Manhattan and Orlando locations.”

This initial lineup of merchandise has plenty of great options for movie buffs everywhere. 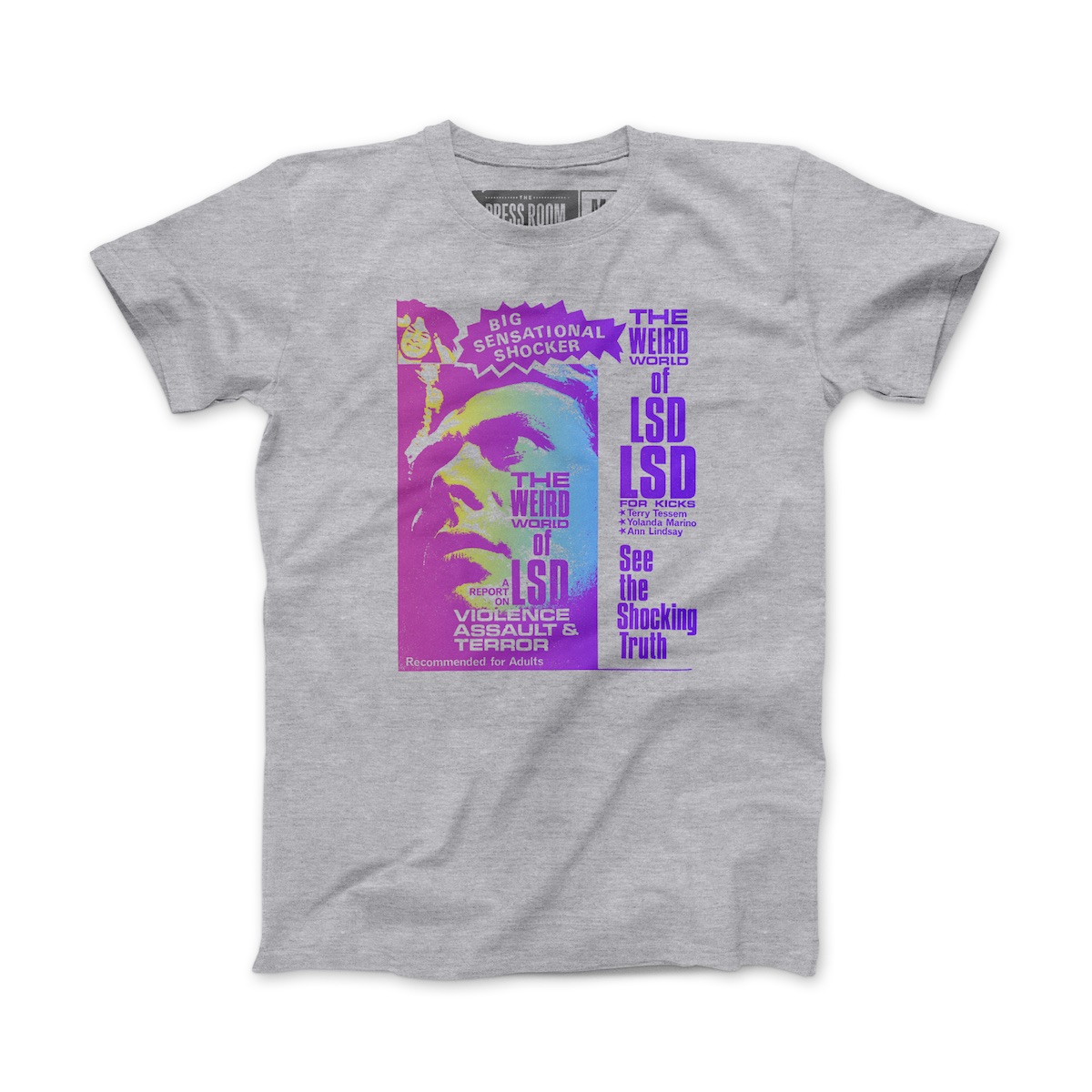 “Slip into something a little more transdimensional with the psychedelicious all-cotton tee that rearranges reality. This psychoactive three-color image comes from an original ad block promoting the 1967 documentary that blew the lid off the acid racket during the ‘Summer of Love.’ Put on, tune in, drop out.” 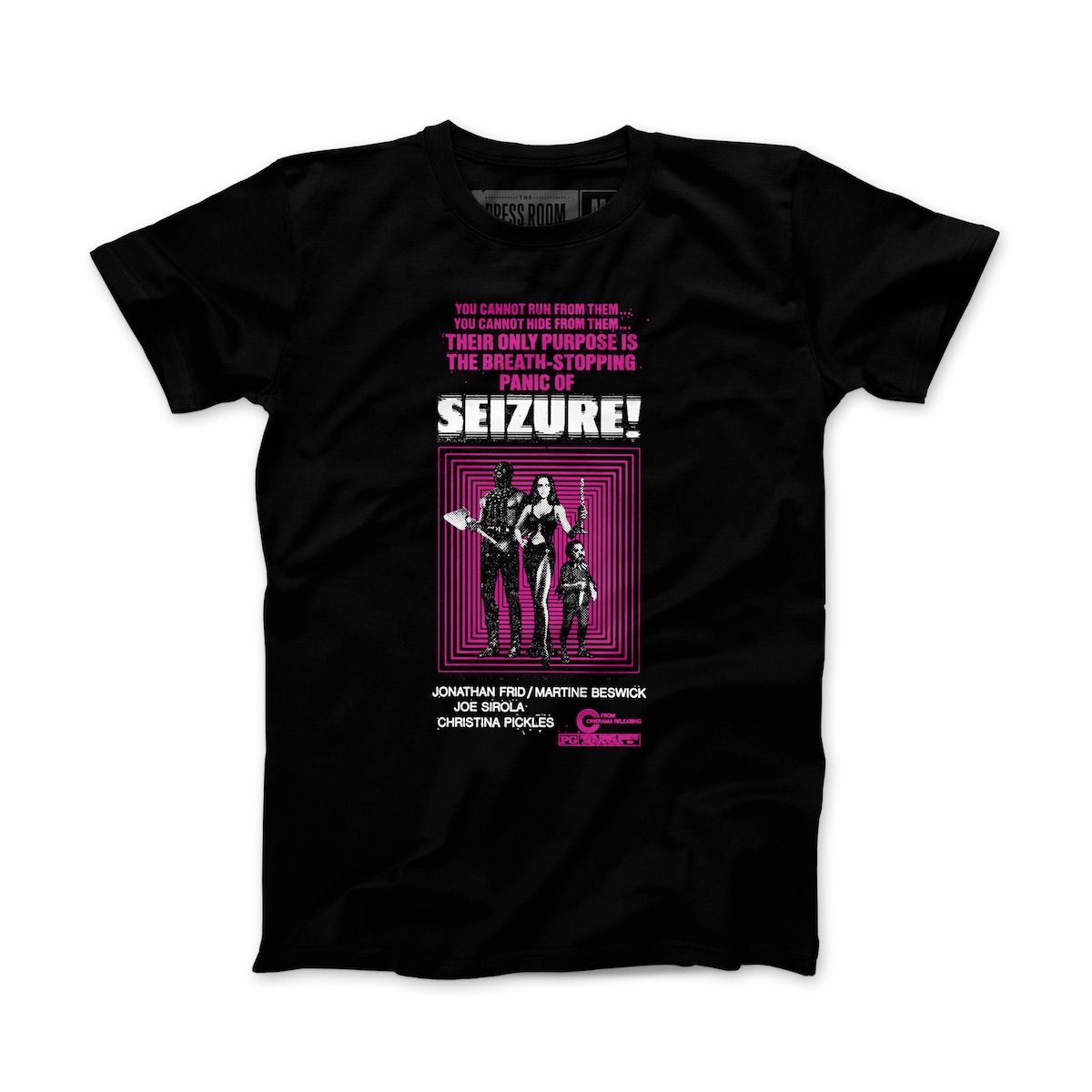 “Before he redefined ‘80s cinema with Platoon and Wall Street, Oliver Stone’s relentlessly eccentric inaugural feature revelled in ‘70s insanity. Now the pulse-pounding paranoia of Seizure has been captured from its original ad block on a stunning two-color tee, as the film’s three harbingers of doom creep towards you on a purple portal to the afterlife.” 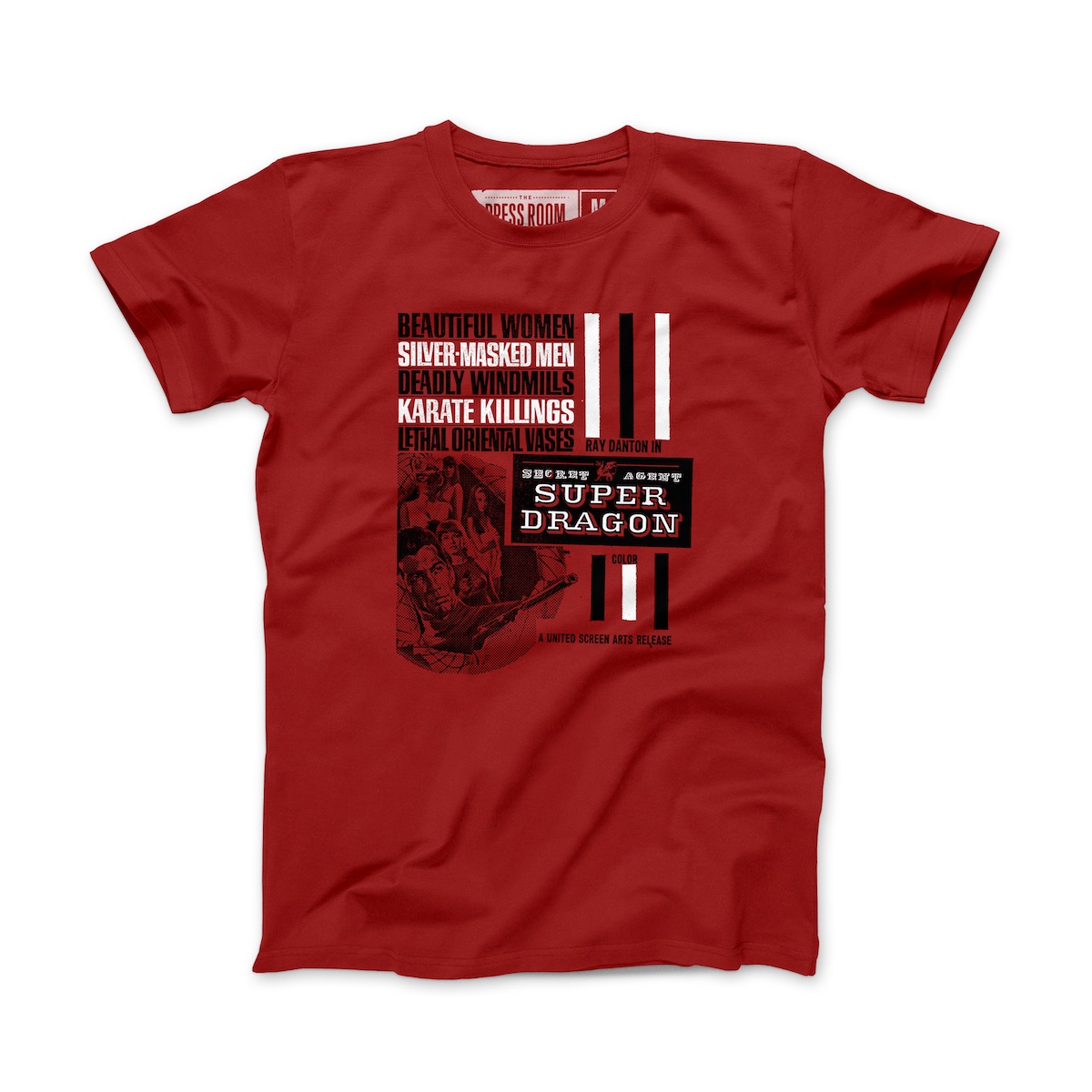 “Only four years after the release of the first James Bond film, countless budget-grade secret agents were bursting through the screens of every movie theater on earth. And now you can be as dashing, fearless, and irresistible as Italy’s answer to 007 in this stylish spy-ish two-color tee, transferred from the original 1966 printing block.” 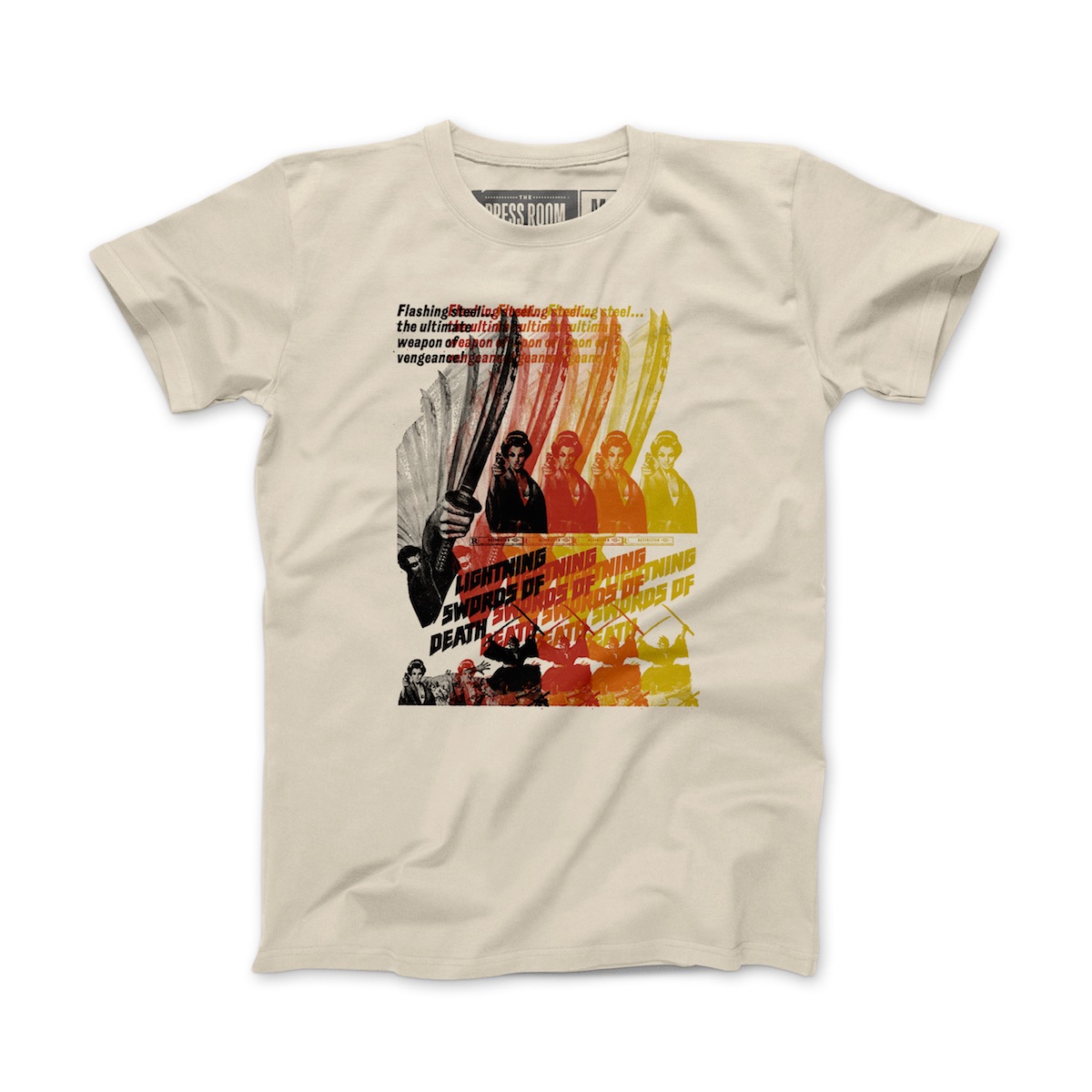 “In the 1970s, kung fu films made the overdue leap from Asian cinemas to becoming a full-blown international phenomenon. Movie fans suddenly faced an insatiable hunger for daredevil stunts, hand-to-hand combat and antigravitational blades, all of which are on full display in the iconic Lightning Swords of Death, now transformed from the original printing block into a blazing four-color design.” 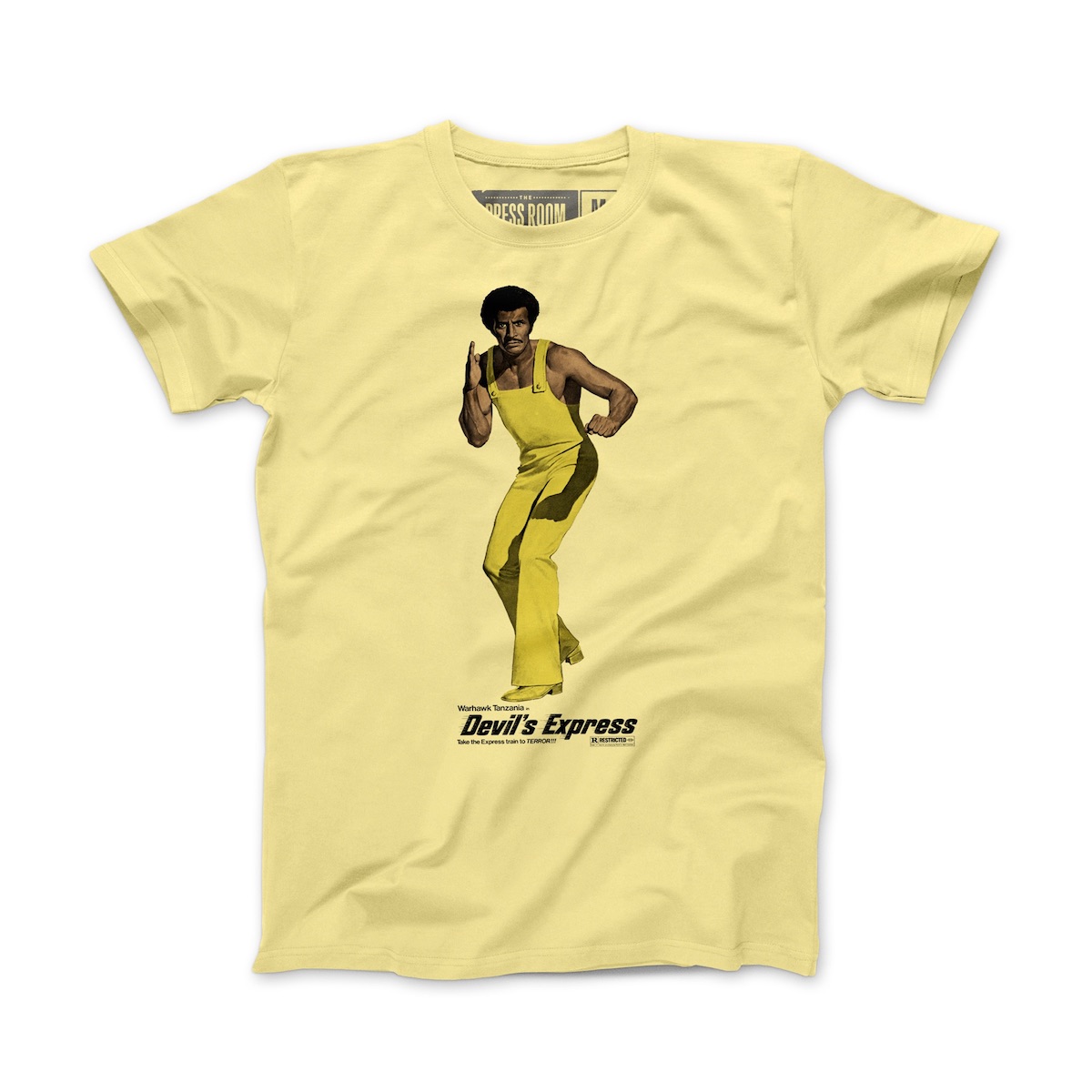 “When kung fu cinema came triple-flip-kicking into the US, it found particularly strong support among black audiences in major cities. Some fans opted to enter the martial arts movie game themselves, one extra exciting example being mighty NYC resident Warhawk Tanzania, whose unmatched fighting skills and yellow overalls are stretched to the limit when he squares off against a 50,000-year-old subway demon. Capture the kung fu fury in this fearless three-color tee from the original 1976 printing block art.” 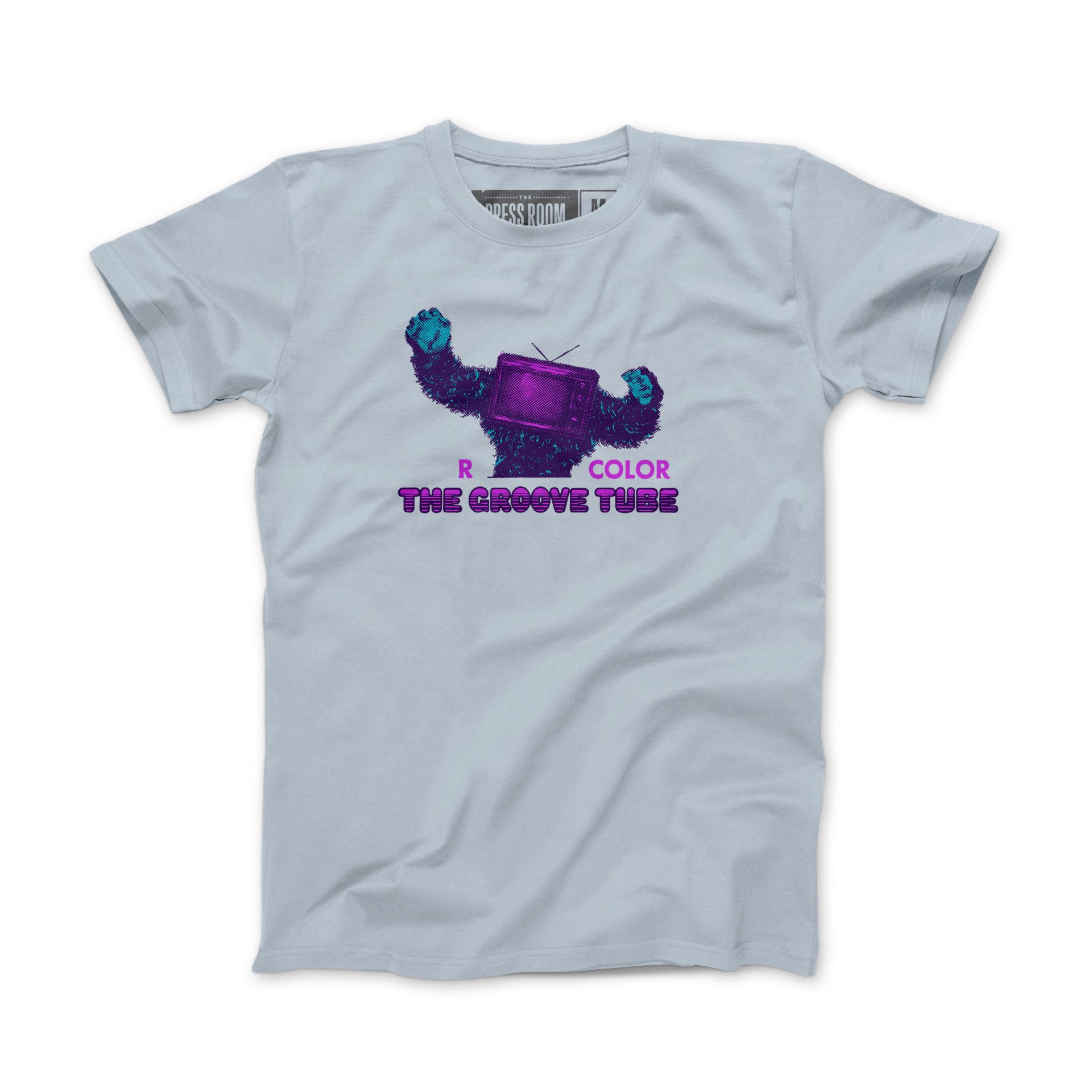 “Yes. That’s right. Totally, it’s a gorilla with a TV head. But it’s also a battle cry of the no-rules lawlessness of ‘70s chaotic comedy, when taboo-smashing gutbusters like Animal House and Kentucky Fried Movie knocked filmgoers through their seats. Proudly display your disdain for authority with this primal three-color attack on the galaxy’s funny bone.” 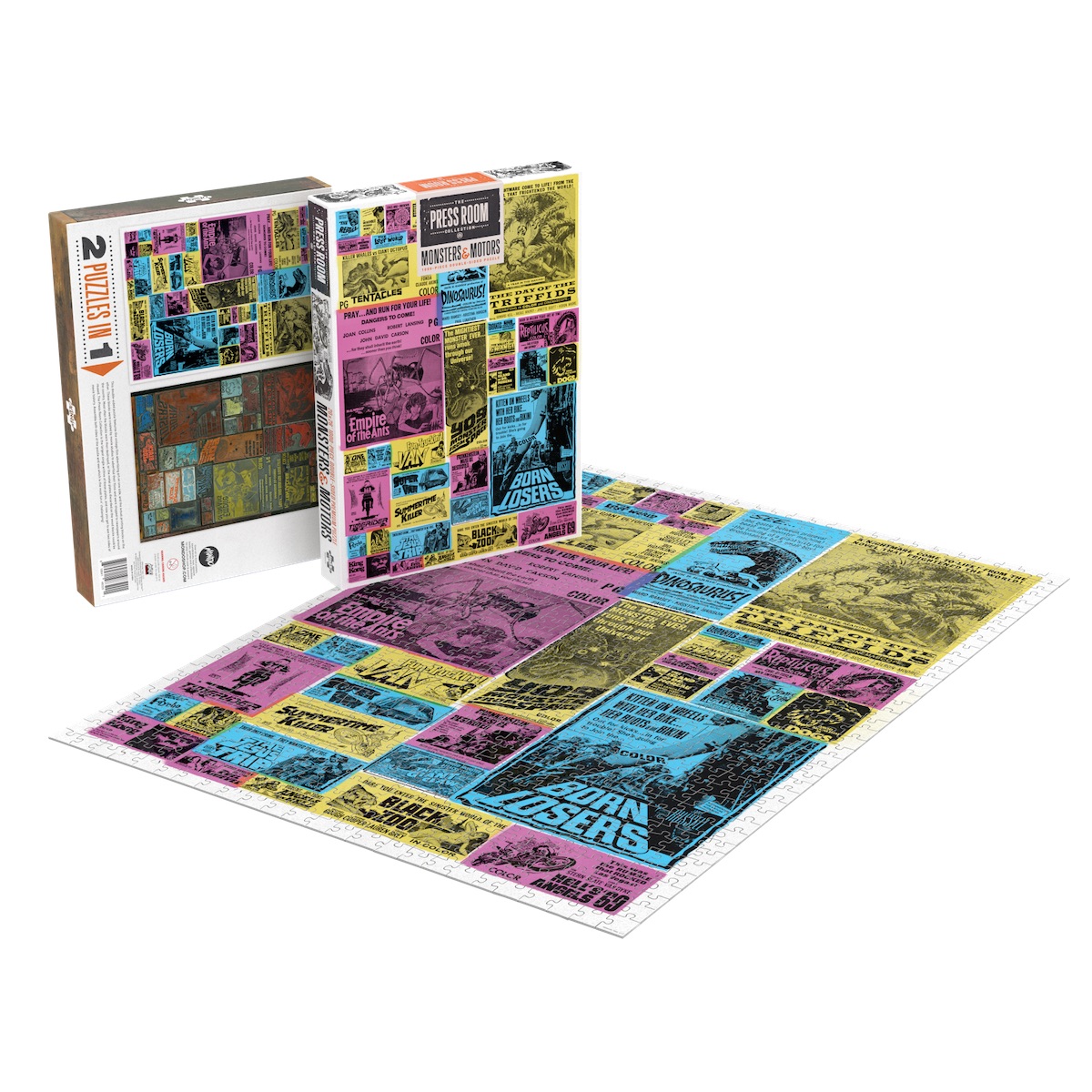 “A skull-squeezing full-color array of vehicular monster-slaughter, showcasing the most untamed and inhuman creatures and/or vehicles from the ‘50s through the ‘80s, all reproduced from the original printing blocks. Spaceborne plant-beasts collide with custom ‘70s swinger vans! Flesh-ripping dinosaurs get cozy with toothless bikers! Plus, this is a two-sided puzzle, with the ad art on one side and a photo of the actual printing plates on the reverse, making your living room table twice as fascinating and a thousand times more fun.” 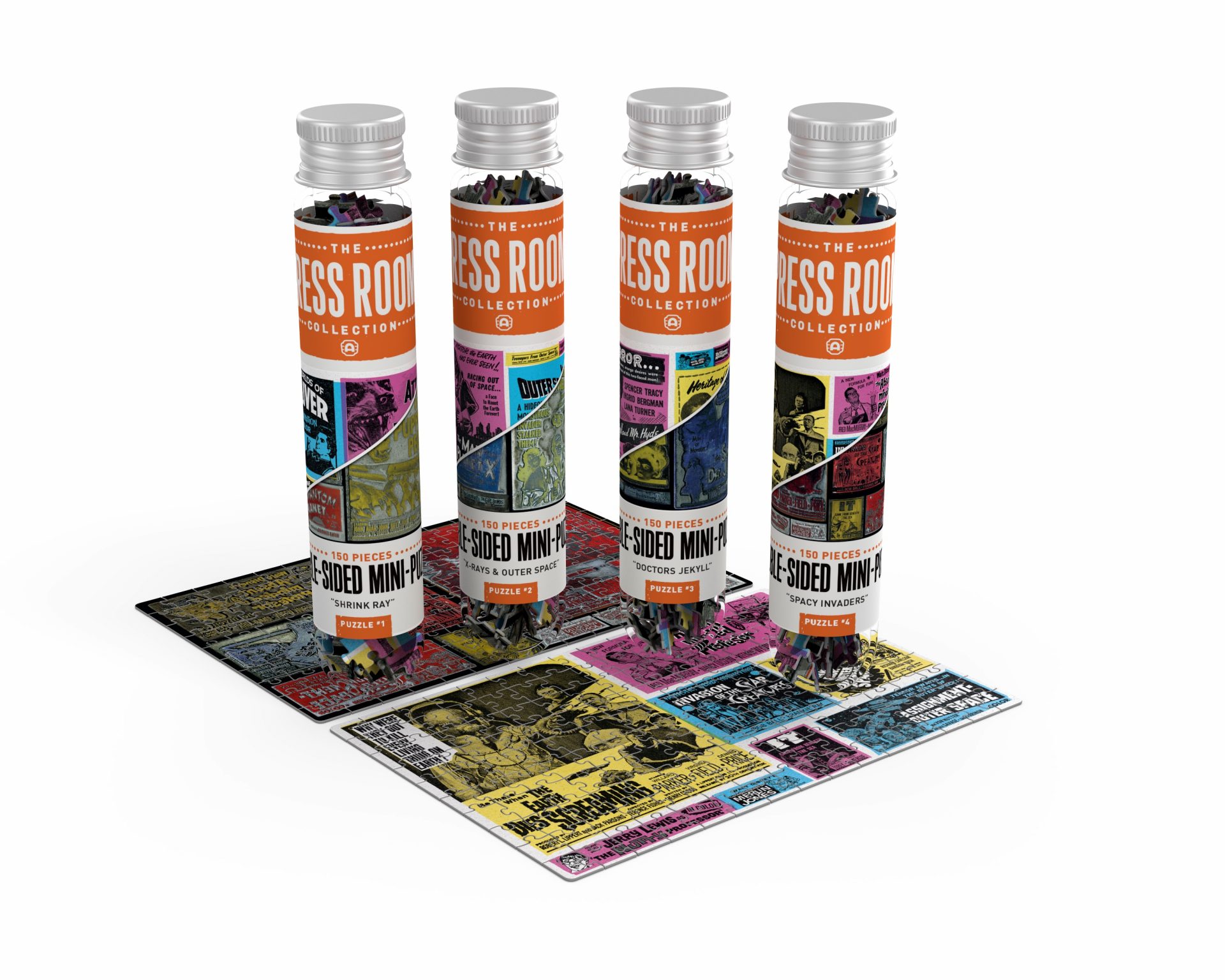 “10 out of 9 mentally unstable scientists agree: This collection of four double-sided miniature masterpieces of maniacal movie malevolence are the supreme sci-fi strike against our species. Each 150-piece puzzle comes disassembled in its own clear test tube, showcasing classic science fiction film ad art from the original plates, with the reverse being a photo of the unique handmade press blocks themselves. This set features four puny-yet-powerful themed puzzles: Shrink Ray, X-Rays and Outer Space, Doctors Jekyll and Spacy Invaders.” 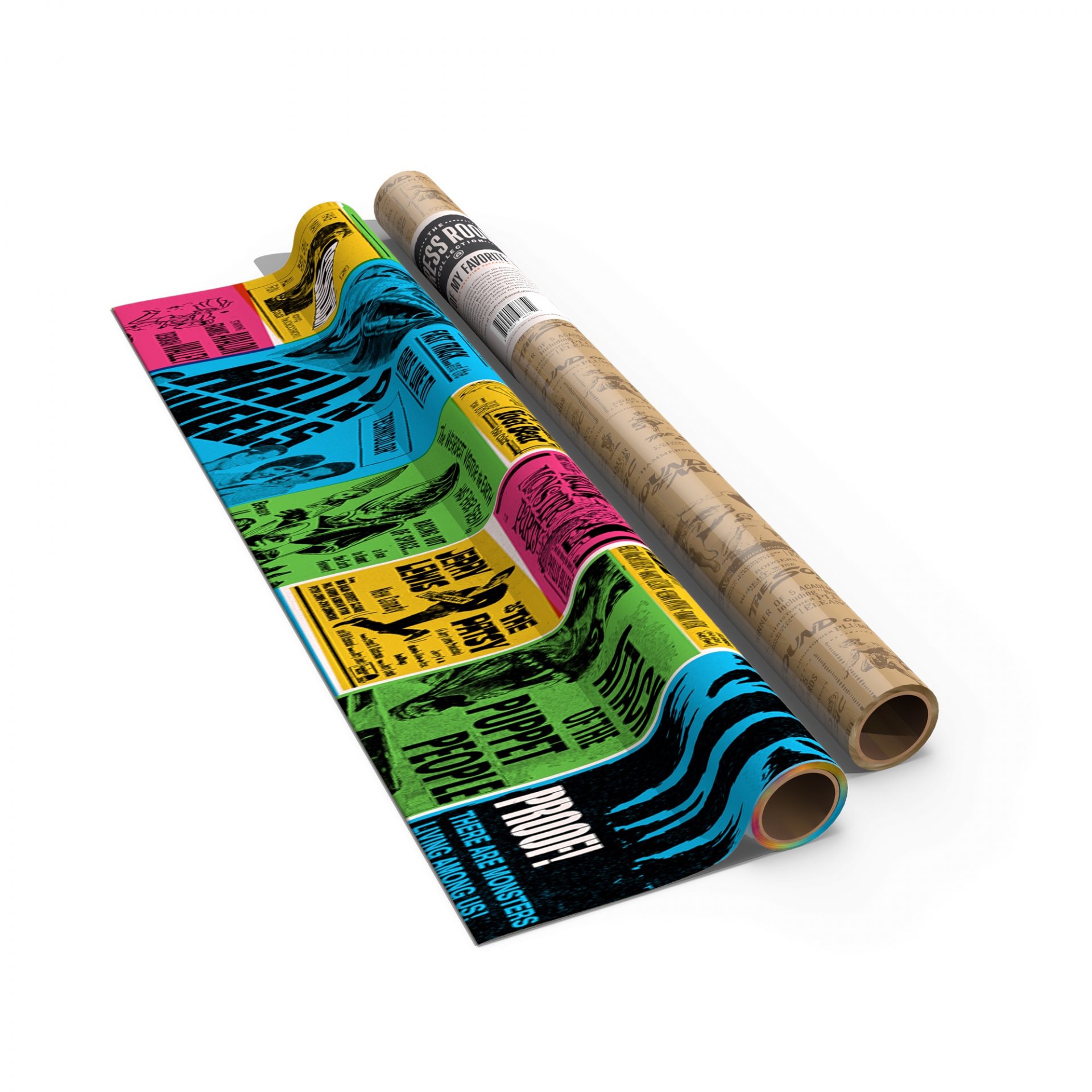 “In this deluxe duo of exclusive wrapping paper rolls, the hills are alive… with the undead! First, entomb your loved ones’ gifts in this skull-squeezing full-color array of vehicular monster-slaughter, showcasing the most untamed and inhuman creatures and/or vehicles from the ‘50s through the ‘80s, all reproduced from the original printing blocks. Spaceborne plant-beasts collide with custom ‘70s space vans! Flesh-ripping dinosaurs get cozy with two-wheeled warriors!

Then, not sure how to wrap that surprise for the Bavarian who has everything? Turn any present into the gift of song with this exclusive wrapping paper designed from a selection of original ad plates for The Sound of Music. Your heart will fill with melody and good-timey anti-Nazi sentiments as you unroll this 10’ x 26” sheet of art from the timeless musical.” 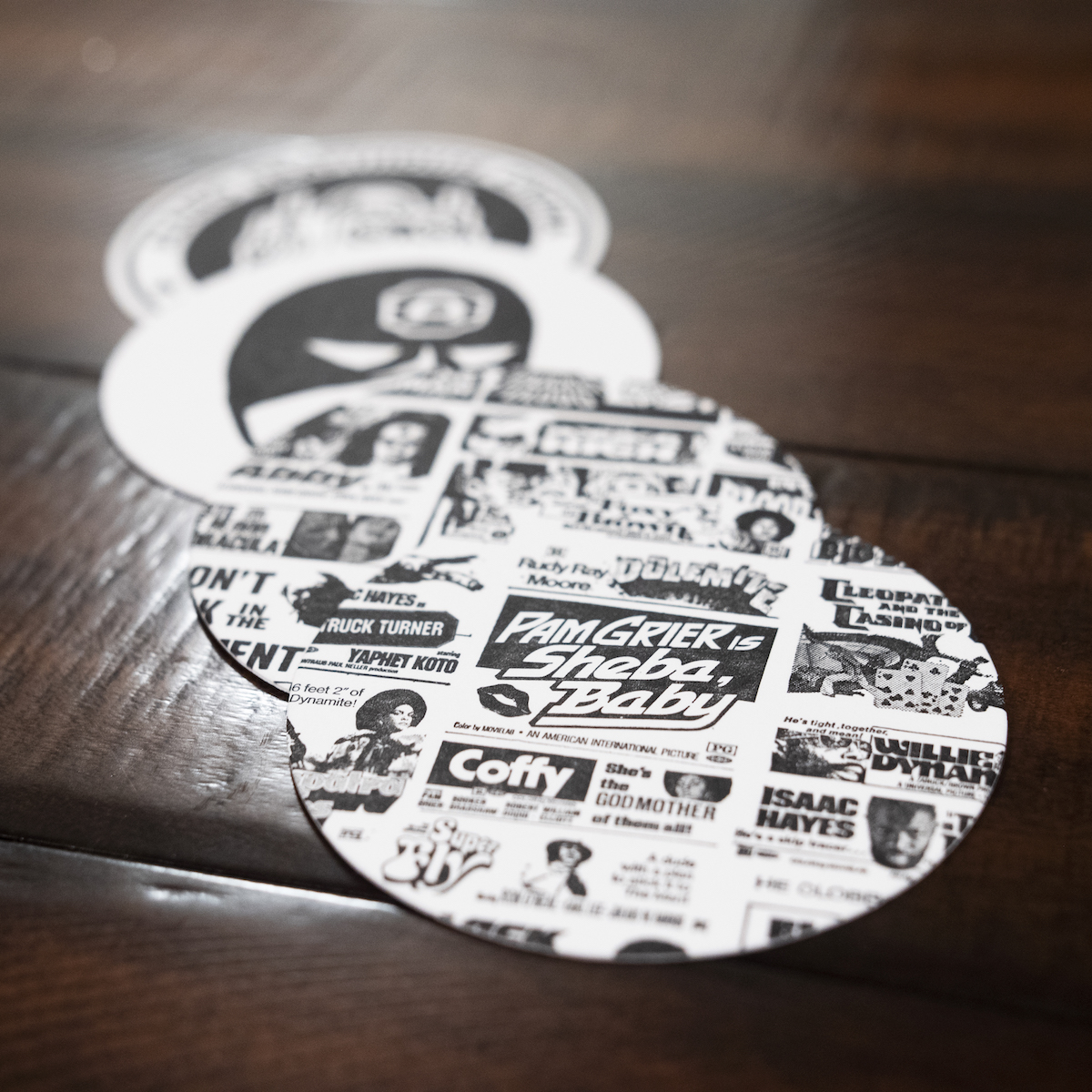 “Respect wood. Protect your coffee table. Make the bottom of your drinking glass the most exciting part of your life. The Press Room presents a sextet of delightful die-cut cinematic coasters hand-printed from the original handmade printing blocks on a genuine antique letterpress machine.” 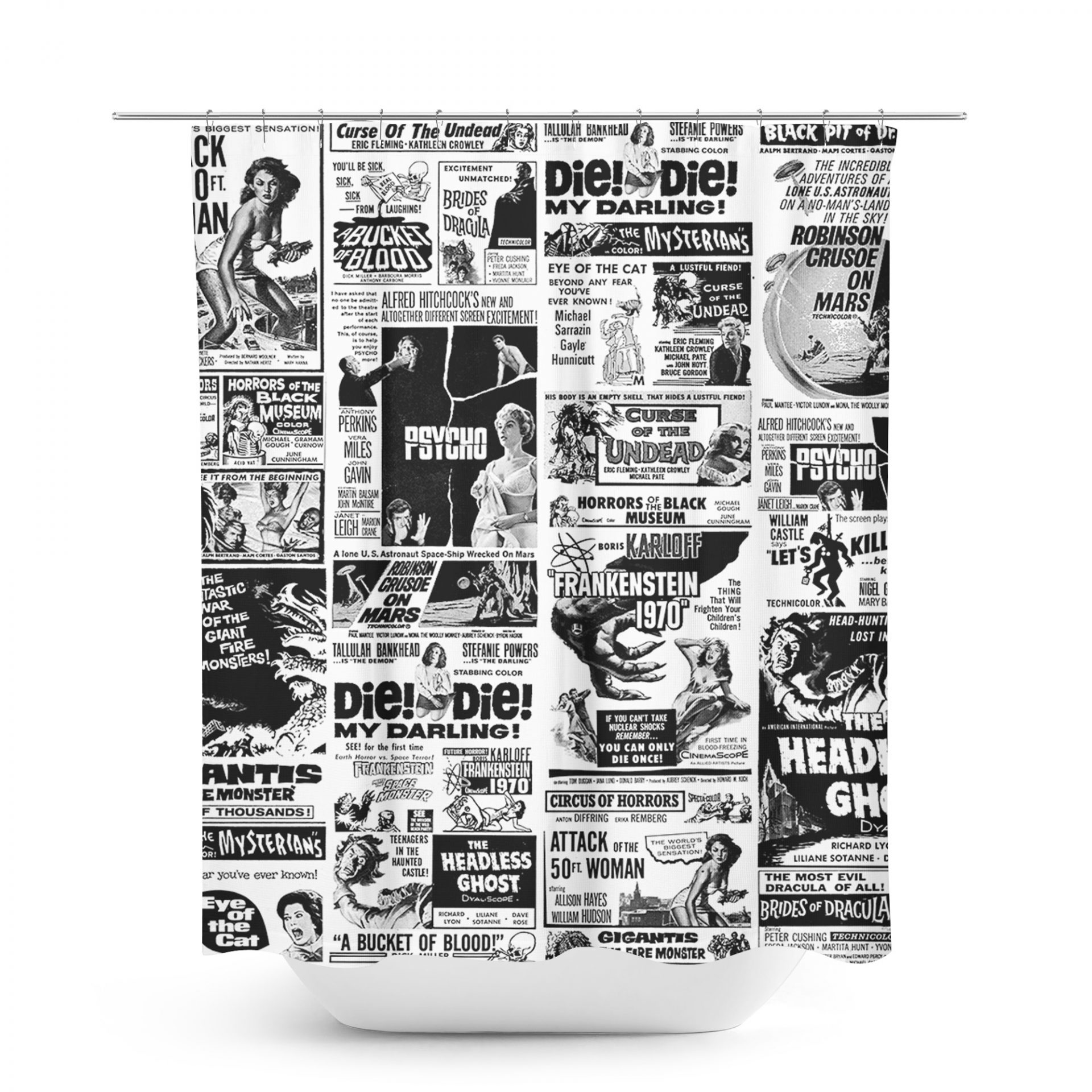 “Turn every morning into the opening scene from Psycho with this bone-chilling addition to the scariest room in your house. The Press Room’s Blood Bath shower curtain is a carefully curated collection of classic — and not-so-classic — horror film ads, each aesthetically alive with the thrills of the undead. While you’re scrubbing up, Dracula’s creepin’ and Frankenstein’s peepin’, all reproduced in murderously fine detail from their original handmade printing blocks. BLOOD BATH is mold, mildew and soap resistant. Non-vinyl, non-PEVA, environmentally friendly, and made from heavyweight 140 gsm polyester. 12 metal guarded holes with hooks included.” 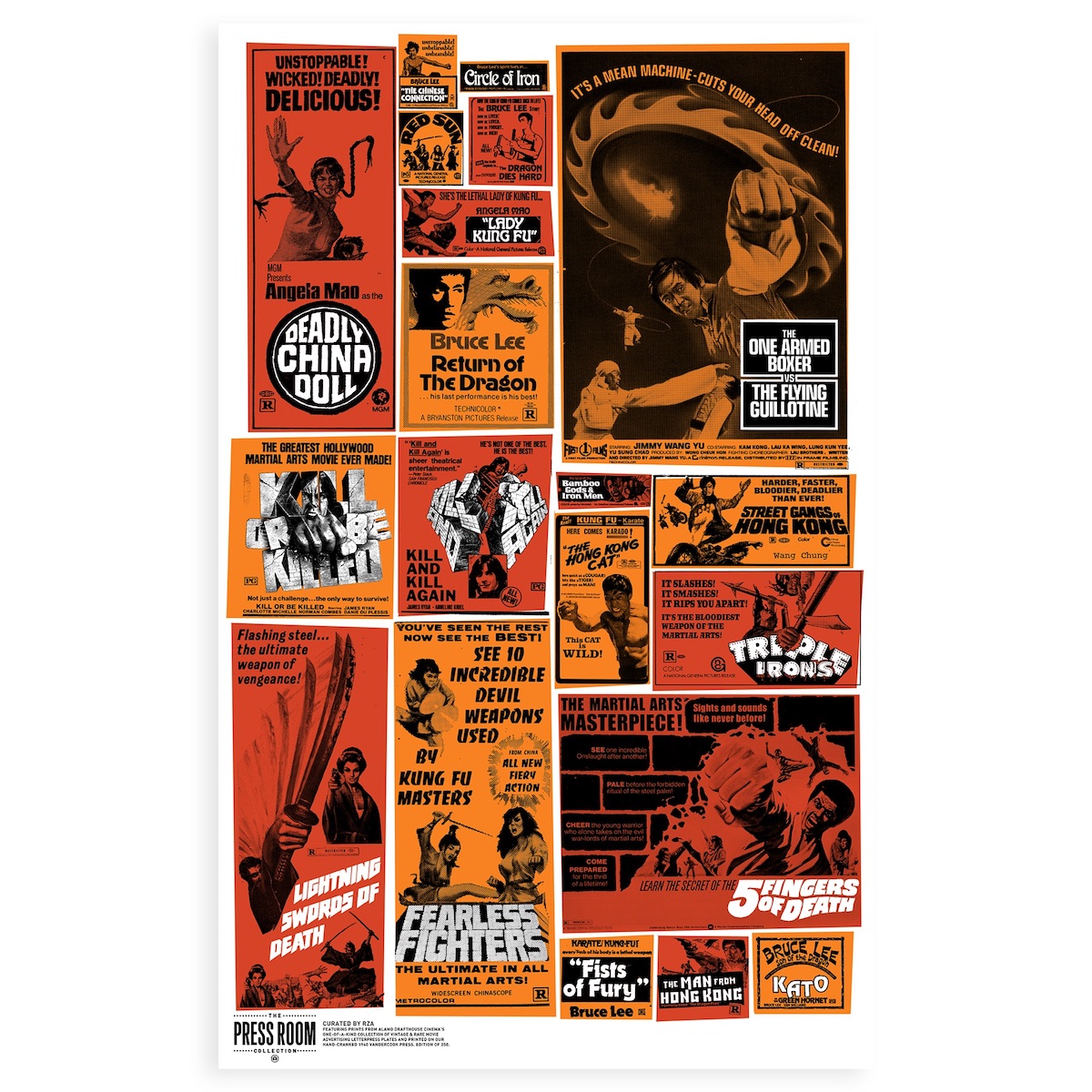 “Fists of steel… Weapons of vengeance… Musician/filmmaker/kung fu cinema historian RZA of The Wu-Tang Clan presents a hand-picked collection of the finest and most furious martial arts ad plates, just in time to coincide with his new feature, Cut Throat City. This hand-screened, three-color print will be available in a one-time numbered edition of 250, each signed by RZA himself.”

This behind-the-scenes video shows how RZA’s poster was made from those old letterpress plates.

The musician also talked about the inspiration behind his design in a statement:

“Kung fu has been called ‘the cinema of vengeance,’ but it was also built on stories of self-reliance, characters finding the strength to overcome impossible odds to carve out their place in society. This theme spoke to audiences worldwide and carried martial arts films into the ‘70s spotlight.

The movies I’ve selected for this print barely scratch the surface of the dynamic and insanely vast world of kung fu, a genre that has become as ingrained in global film, television, music and culture in general as any other. In my new film Cut Throat City, I’ve incorporated that spirit of brotherhood and unique displays of action into my frames. My lead character ‘Blink,’ a comic artist, has drawn his inspiration from the martial arts genre and mixed it with an urban western sensibility to create his world.

I hope these prints inspire the receiver to create something of their own. They’re also simply cool to look at. Enjoy.”

Each purchase from The Press Room Collection through September 8 will also come with a free Alamo On Demand rental of the 2017 documentary Pressing On: The Letterpress Film. It explores the 500-year-old printing process’ survival in the digital age. Something tells us the T-shirts weren’t as good 500 years ago, though.