Quiet everybody, the Network Execubots are coming! Kind of, anyway, as The Hollywood Reporter has just reported that Warner Bros. has signed a deal with a tech company to implement an “AI-driven film management” system. The system, which may sound more like an administrative tool than an industry game changer, will help the major studio decide which projects receive the proverbial green light: a task that’s daunting for humans, but a potential walk in the park for computer algorithms.

According to THR, the system, created by the Los Angeles-based company, Cinelytics, uses “comprehensive data and predictive analytics” to help “guide decision-making at the greenlight stage.” THR also says that Cinelytics’ tech can “assess the value of a star in any territory,” and even predict how well a film will perform in theaters and secondary markets. 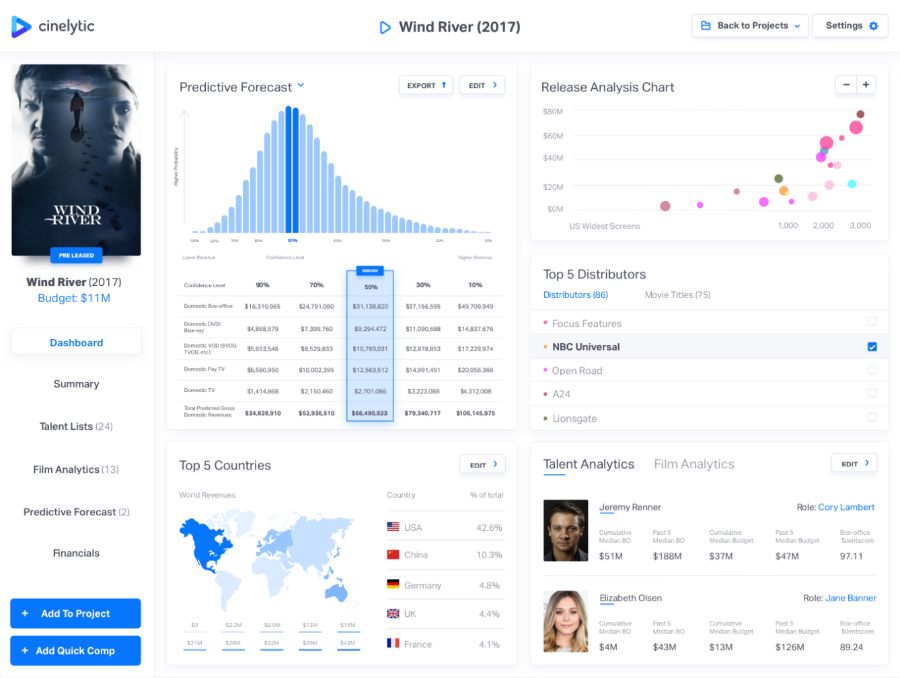 The Cinelytics website describes its “Integrated, multi-user data and analytics platform” as a tool that allows companies to “quickly, and consistently, inform critical decisions throughout a film’s value chain.” And while that’s a bit vague, a reasonable guess at what the company is doing is using neural networks in conjunction with big data collected from “the biz” to help predict which movies will rake in the most money. It should be noted that neither the THR article nor the Cinelytics website references neural nets at all (according to what we read, anyway), but considering the use of terms like AI and “comprehensive data,” it’s hard to believe anything else is being used. Besides, neural nets are so hot right now.

Cinelytics’ founder and CEO, Tobias Queisser, told THR that even though his company’s technology is effective, entertainment industry executives need not worry about their jobs. “Artificial intelligence sounds scary. But right now, an AI cannot make any creative decisions,” Quisser told THR. He added that “What [his company’s AI] is good at is crunching numbers and breaking down huge datasets and showing patterns that would not be visible to humans.”

Domestic box office revenue of movies in North America from 1995 to 2019, by rating (in billion U.S. dollars).

However, in another, unrelated, article on the topic of AI in Hollywood from The Verge, instances are noted where this type of technology is shockingly effective. For example, the article refers to an experiment whereby an AI tool built by ScriptBook—another company that’s placed itself at the intersection of entertainment and artificial intelligence—was able to predict which films would be profitable with 86 percent accuracy as opposed to human executives’ 44 percent. That means AI, or at the very least ScriptBook’s AI, is already nearly twice as effective as people at determining which films will be profitable.

But there are still caveats to AI’s seemingly insurmountable advantage in the context of making money off of entertainment: One of which is the fact that it’s difficult for the tech to predict how new ventures will pan out. Neural nets are usually trained on previously available data, which means they need a lot of evidence before they can make accurate predictions. But we’ve also seen AI “smart” enough to simulate its own data, so that human advantage may disappear soon too. The AI certainly won’t be perfect immediately though, and even in the year 3,000 it seems like there will still be some kinks to work out.

What do you think about Warner Bros. teaming up with Cinelytics for an AI-driven future? Use your own neural networks to give us your opinions in the comments!