As Warhammer Fantasy Battle fades from the memory of all but the old timers and grognards, it’s increasingly easy to forget that the game of square bases wasn’t just generic fantasy. There were the Skaven, of course, with their endless warrens beneath the cities of humanity. The Lizardmen and their star-traveling Slaan masters were pretty different. Even the main block of plain, old humans were a deliberately garbled Renaissance Holy Roman Empire, instead of the well-worn England with a splash of France we’re used to. The Warhammer World was funny and weird right to its bones.

One of the funniest and weirdest were the Goblins. Even more than most of Warhammer’s Greenskins—Orcs and all the rest—the Goblins were meant for fun. Their iconic unit was the Night Goblin fanatic, a Goblin who would hide inside units eating mind-altering but poisonous mushrooms all game, until they were released with a huge ball and chain which would do devastating damage to anyone it touched… even other goblins. Fanatic movement was random: they’d simply spin around the table like tornadoes of death, until they rolled double on their movement, representing that they’d wrapped their chains around their necks or their hearts had exploded.

Hilarious, devastating, but not terribly reliable. Which was the point: Games Workshop reinvented goblins as a faction meant to lose and very rarely win in glorious, hilarious ways. Blood Bowl is particularly notorious for this; the Goblins there wield chainsaws and pogo sticks to even the odds, or get thrown around by Trolls. Goblins rule if you’re not too fussed about winning. The problem has always been that most people are fussed about winning; the slow demise of Goblins as a primary faction was inevitable. It started as long ago as the fourth edition. That was the first boxed edition of the game and it was packaged with High Elves and Goblins.

The problem was that Goblins had a rule at the time that they were subject to fear (i.e. prone to run away and miss their attacks) when confronted with High Elf units they didn’t outnumber at least 2:1. There wasn’t any compensation for this, not even fanatics in the box. It broke the cardinal rule of all things Goblin: give the poor little green guys a chance if they roll spectacularly well and make it funny when it happens.

Goblins became a sideshow. You took a unit or two for aesthetics or to make up numbers in an Orc force, but that was usually it. Fast forward to Age of Sigmar and Goblins have little to show for their rich prior history as weirdo underground mushroom eaters, save for the fanatics, which still linger as reminders of a halcyon age. 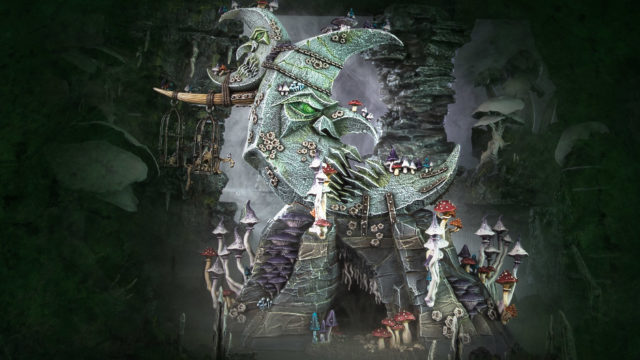 The Boys Are Back In Town

The Goblins are finally getting their due. Age of Sigmar has combined the two most popular Goblin subfactions—the Moonclan and Spiderfang—into one big blob of Goblin wonderfulness, the Gloomspite Gitz, accompanied by an army book of the same name. It’s just Goblins, with a few Trolls and the option to take a Giant or two (as if)—no Orcs, no Black Orcs, just the real power behind the green throne.

The thing which unifies the various gribblies in the book is the presence of the Bad Moon. The Goblins worship it as an aspect of the great Greenskin god, Gorkamorka, who (depending on the telling) either took a bite out of the moon or got his image smooshed with the moon because of violent waves. The Spiderfang, who very naturally ride spiders everywhere, think the Bad Moon is a giant egg sac filled with spiders, which will hatch at the end times.

Regardless, the Bad Moon is everywhere in the book, an ominous presence which presages the doom of surface dwellers and drives the Gitz into a frothing madness. Of all the lore Age of Sigmar has presented thus far, Gloomspite Gitz is closest to what I want. It feels less like a modern Games Workshop property and more like something out of Glorantha, that hoary, wonderful old fantasy world Greg Stafford came up with. The Gitz feel untamed and at the mercy of supernatural forces even more than Chaos: if you’re a Goblin, the appearance of the Bad Moon or eating the wrong mushroom turns you into something else, something violent, sneaky, and terrible. You’re already all those things (you’re a Goblin) but the fear goes away, leaving you and your fellows to wreck havoc on the civilized world above your cave. 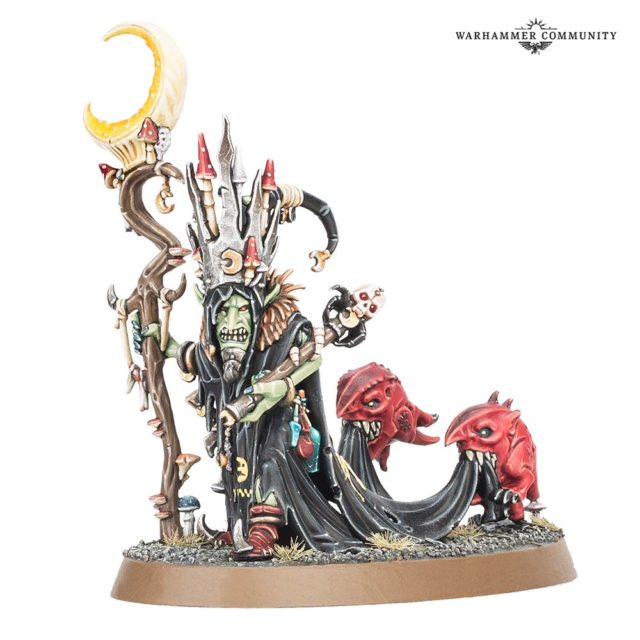 This is represented in the rules. The Bad Moon actually shows up on the table, migrating around in an erratic orbit. When it’s over your troops, it makes them braver and meaner. Combined with some rules giving big bonuses in combat the larger a unit is, and Goblins seem to be (I’ve not gotten them to the table yet to confirm) actually competitive for the first time maybe ever. You still have to be clever, I suspect, but it’s definitely a less random outcome to things. Goblins can be frightening when the Bad Moon rises high.

It’s a perfect mesh of rules and lore, which is something Age of Sigmar does well. It’s also a possible approach to Goblins in any number of non-AoS campaigns, from D&D to The One Ring. Goblins shouldn’t just be the speed bump on your way from level 1 to level 3; Gloomspite Gitz offers a little more, while keeping the Goblins firmly in the still quirky, odd tone which Games Workshop went with decades ago.

I’m always worried when I write about Age of Sigmar that I’m too easy, but the fact is that there’s been little to no fat in their writing or miniatures design for the past two years, and even less since the launch of the second edition. Gloomspite Gitz continues that trend, a trend which shows no signs of slowing as the books and miniatures keep rolling in just as good as the last.

Has the Bad Moon inspired you to go goblin? Tells us about it in the comments below!