We love tabletop games here at Geek & Sundry, and we love to showcase the best games out there. If you want to stay tuned into what’s new and exciting in world of tabletop games, be sure to tune into Game the Game hosted by Becca Scott every Wednesday starting at 4PM PT on Twitch and Alpha.

Necromunda. It rolls around in your mouth like a jagged rock scratching the deepest recesses of your throat. Its reputation as the most baddest-of-ass sci-fi skirmish miniatures game precedes it by a wasteland mile. The 90’s were the heyday of publisher Games Workshop–although that’s quickly becoming debatable–and this gang warfare throw-down was a significant part of that. Necromunda is back baby and it’s a great time to be alive, slamming spook and chewing lambent fungi.

For those fresh off the bus let’s set the stage: Necromunda, published by Games Workshop and set in its Warhammer 40,000 universe, is gang-on-gang warfare akin to the Block Wars arc in Judge Dredd. You’re dealing with over the top futuristic thugs sporting oversized weapons and glistening mohawks. The throw-downs occur in these huge industrial pointed skyscrapers called spires. Everyone on the planet lives under the thick walls of the structure due to noxious toxins suffocating the wasteland outside. So you have groups of 8-12 warriors throwing lead at each other in an underground industrial junkyard. Perfect.

The Necromunda of old focused heavily on multi-story terrain and vertical firing lines. This new version is a slightly confusing change-up, with the boxed set featuring tunnel firefights that can best be described as the dudettes/dudes in a corridor genre. This includes games such as Space Hulk, Imperial Assault, and Level 7: Omega Protocol. The setup here is head to head skirmish as opposed to an exploratory dungeon crawl or overlord versus player structure.

That shift from extreme heights to claustrophobic tunnels is hard to swallow upon first blush. For many of us, Necromunda was heavies (big damage dealing characters) setting up nests atop industrial stacks and raking the ground below with blistering hellfire. The 3D extended fights do still exist, but you need to pick up the Gang War supplement for these rules as well as the much-needed campaign system–another staple of the predecessor. The only quibble with Gang War is that it does not contain any rules for the other iconic houses in the setting, so we’ll be waiting awhile yet for Cawdor, Orlocks, and the rest of the homeboys. 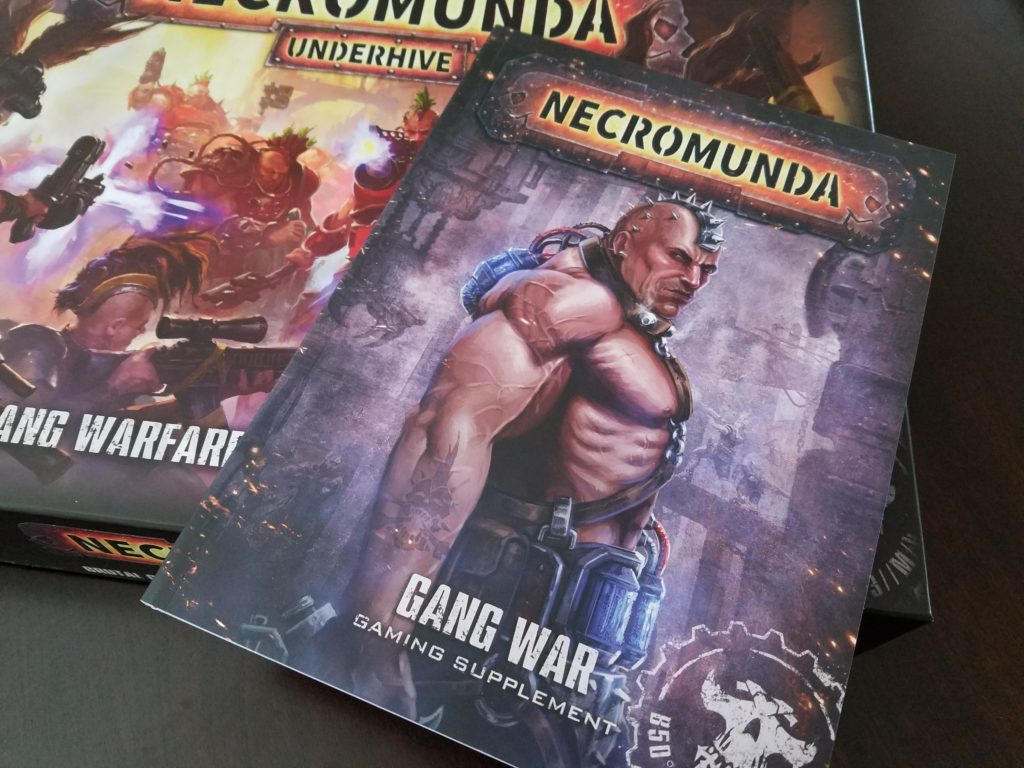 The concept of your gang evolving with experience, scrounging up new equipment, and losing limbs over the long haul is tied so snuggly to my mental image of this property that it was difficult to approach the core box without a preconceived notion of skepticism.

Thankfully the game delivered beyond my wildest hopes.

As I mumbled “please be good, please be good…” below my breath upon the opening turn of my first contest, my nervousness threatened to overwhelm. Then my Escher champion fired a high-powered plasma blast at the mouth-breathing Goliath across the open chamber and blew a hole in his chest the size of a Rhino (the Space Marine tank, not the animal).

Nostalgia is powerful, and this new release does boast a decent amount of that, but there’s no denying the original system is a bit dated at this point. By starting fresh with the 40k 8th edition structure underpinning play, everything feels alive and vibrant in a way I couldn’t have dreamed prior to sitting down and rolling those bones. 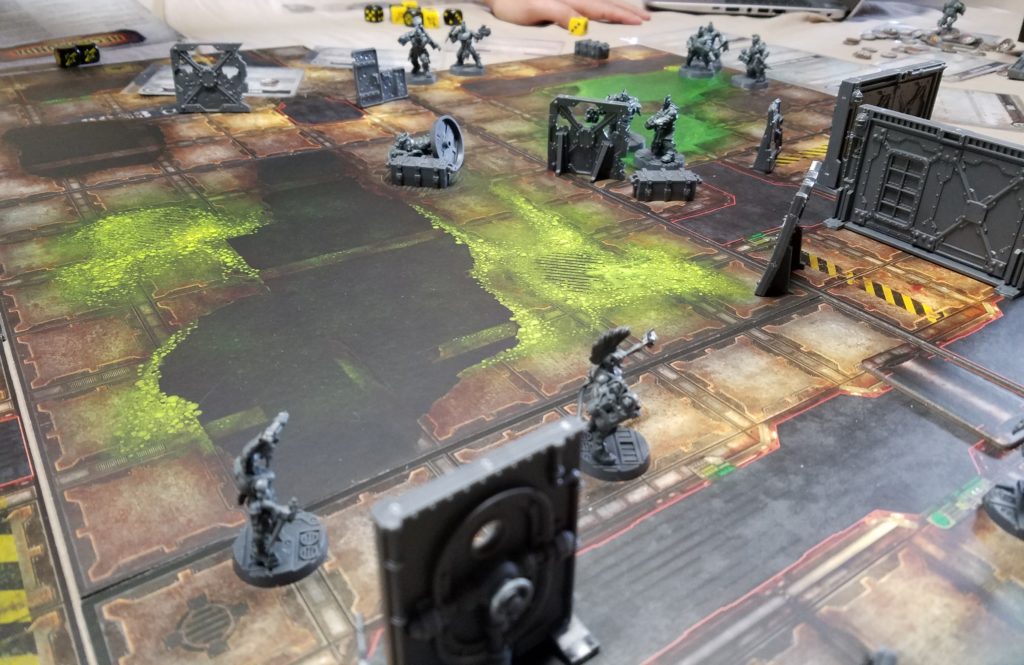 The biggest mechanical shift here is the dynamic change to activation. Instead of the tired IGOUGO (I go, you go) system of opponents taking turns performing actions with their entire gangs, we have a much more fluid process of each participant activating a single model back and forth. This makes the hot conflicts feel more dynamic as you’re able to respond, bluff, and play against your opponent’s tactical emotions in a very satisfying manner.

Much of this new release is trade-offs; one’s that are absolutely worth making. We have much less variety in weapons, particularly heavy equipment. There are no more heavy stubbers or heavy lascannons. Instead, each faction has a single piece of specialized equipment such as the toxic gas launcher for the Escher and rivet cannon for the Goliaths. Both noticeably short-ranged and a huge shift from what we’re used to in classic ‘Munda.

Toss in the fact that overwatch is no longer a thing (although you can acquire it as a skill in the campaign) and you have a game that’s quite different in focus from the original. No longer is it about gaining the high ground and going on overwatch with your heavy, instead it’s about gaining position on the battlefield and focusing on accomplishing your objectives. This is a tradeoff that is enormously beneficial to avoid degenerative stalemate play and a welcome change.

While we no longer have as much weapon variety, the color and flavor is better than ever. Each faction has their own specialized equipment lists that really dig into the asymmetry of the setting. This is fantastic as it leads to more distinct groups and divergent playstyles.

The fabric of Necromunda: Underhive is the narrative. The original game had this quality, but the new version doubles down on the concept and tailors each of the new elements around this core value. The introduction of story-focused card play, the ability to knock foes backwards into pits with grenade blasts and shotguns, the fact that the game comes with a tentacle monster that attacks nearby gangers–it’s all about telling fantastic and memorable stories. 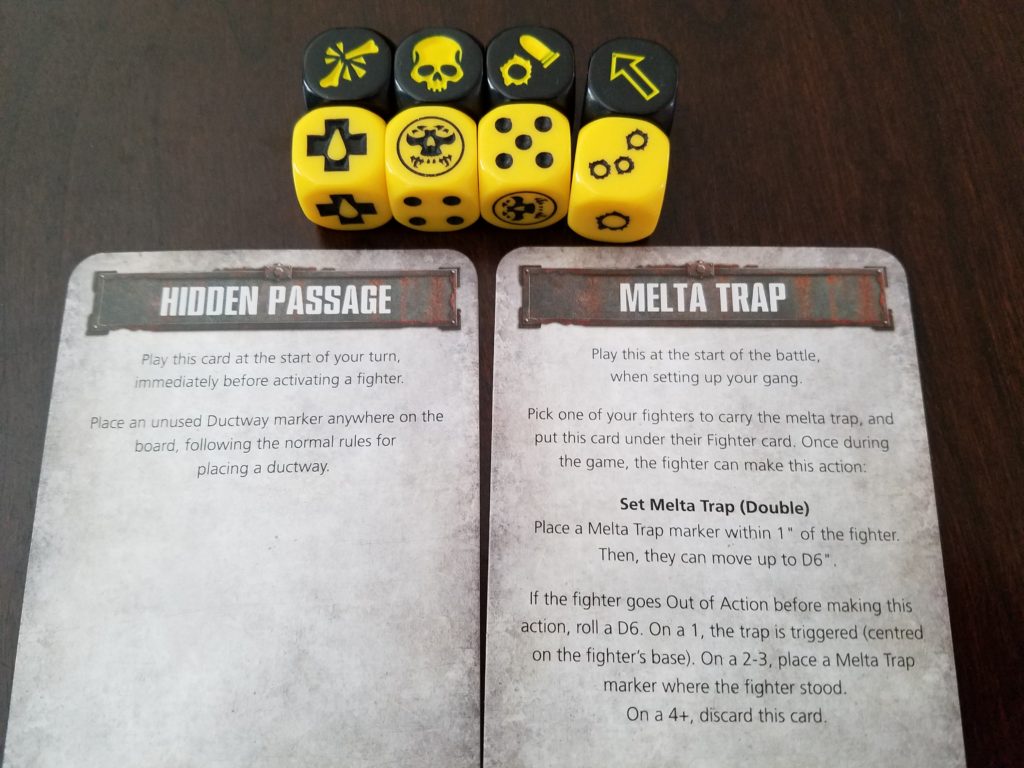 It’s easy to lose perspective and get lost in that aggravation of gutting your precious baby Necromunda. Once you realize much of those holdover emotions are pure nostalgia, it’s easy sailing and the excellence of the system punches a fresh hole right in your cardiovascular system. It was hard to come to grips with the realization that this is a better game than that lofty dream of 15-year old me sneaking through tunnels with blood-thirsty Delaques. Yet, it absolutely is a better design and one suited for the current climate of skirmish gaming.

Have you played the original Necromunda? Let us know in the comments! Don’t forget to check out into our tabletop show Game the Game hosted by Becca Scott as we play games and talk about what’s happening in the land of tabletop gaming on Twitch and Alpha every Wednesday starting at 4 PM PT.