Here’s a snapshot of what would happen if Willy Wonka & the Chocolate Factory collided with Westworld: It’s legendary MythBuster, Adam Savage, being pulled by a Boston Dynamics robot dog while seated inside of a rickshaw he built himself. Because Savage apparently—really—loves rickshaws. And robots. And top hats? Can this man please build an amusement park already?!

Savage put out his first video showcasing Boston Dynamics’ quadruped robot, Spot, in late January of this year, but this is the first time we’ve seen him literally put the robo-pup through its paces. And while clapping a rickshaw onto Spot’s back doesn’t seem like the most productive way to use the robotic tool, it makes sense from a demonstration standpoint. One of Spot’s biggest selling points—and Spot will most definitely be coming to market at some point—is its ability to carry stuff from point A to point B, as is shown in the Boston Dynamics teaser video below. (Watching the teaser is helpful ’cause it’s a good reminder that these things are going to be super helpful in packs.)

For those who are totally unfamiliar with Spot, the good news is that the quadrupedal robot is not as creepy as the ones in that crazy episode of Black Mirror. Certainly not as smart, anyway. As of right now, Boston Dynamics, a robotics design company based out of Massachusetts, has begun leasing out beta versions of Spot to select members of various industries for testing. Savage, of course, is the temporary owner of one, but they’ve also reportedly been leased out to the Massachusetts State Police Bomb Squad, as well as an oil rig in Norway. 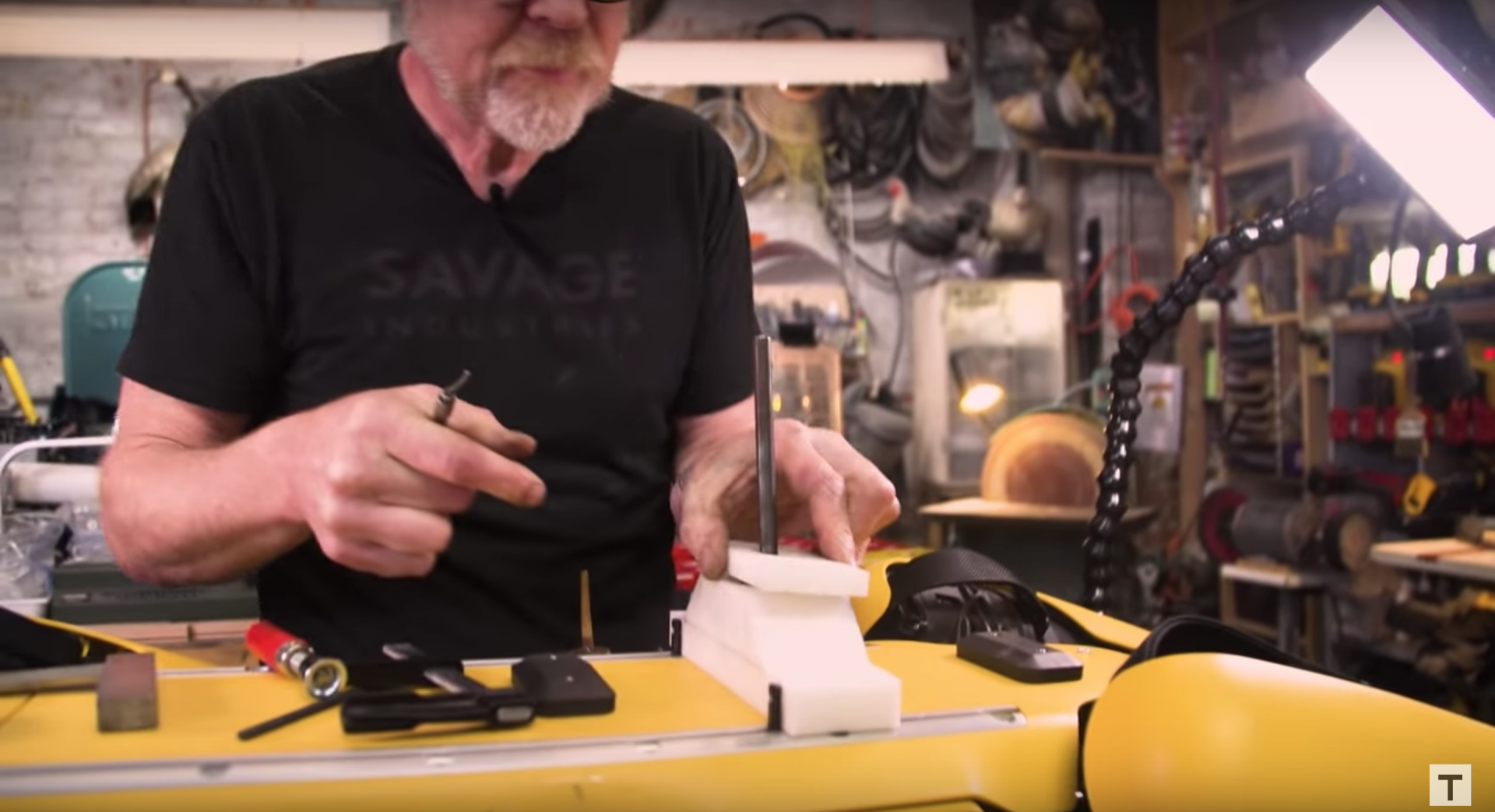 A look at the custom towing hitch Savage built in order to connect the rickshaw and Spot. Adam Savage’s Tested

The demonstration is especially interesting because it helps to show which stage of development Spot’s currently in, as well as what Spot’s potential is as a tool in the future. Note that Spot—as well as everybody’s favorite backflipping bipedal bot, Atlas—is remote controlled by a human operator, and is not yet autonomous. In fact, we see in the video that Spot needs adjustments to its out-of-the-box software in order to better complete its task of pulling Savage and his rickshaw; we’ve even had a robotics expert from Caltech reassure us that there is no machine learning going on with these robots whatsoever. Although the fact that Spot’s able to get from point A to point B and make whatever corrections are necessary to do so over varied landscapes is still miraculous, and a testament to the significant progress that’s been made in robotic locomotion.

A teaser commercial for Spot from Boston Dynamics.

It’s exciting to think about what tasks Savage may come up with next for Spot, because we know they’ll hint at potential real-world use cases. Incidentally, we’d also very much like to see drag racing with robot dog-driven vehicles. Adam Savage in his Victorian-era steampunk rickshaw versus Russell Crowe in whatever kind of glorious chariot will be racing around in Gladiator 2 sounds like all kinds of thrilling. It’ll be like pod racing, only exciting!

What do you think about Adam Savage’s robotic rickshaw? Would you jump in the back and go for a stroll, or would you prefer to just get a head-start on running towards the horizon as fast as possible? Let us know your thoughts in the comments!