Everything You Need to Know About the Amazon Rainforest Fires - Nerdist

Everything You Need to Know About the Amazon Rainforest Fires

It can be an enormously anxiety provoking sight: watching the Amazon rainforest, often referred to as “Earth’s lungs,” turn from a piebald combination of vibrant green and blue to a lifeless brown and black as sutures of flame and smoke — visible from space — scar it. The distress is understandable, as the Amazon rainforest is home to 10 percent of the known species in the world and has 140 billion metric tons of potentially climate-affecting carbon dioxide sequestered in its soils. There’s also something intuitively heartbreaking about watching the beautiful, lush landscape burn.

What’s even more heartbreaking, or at least intensely frustrating, however, is the fact that it’s not global climate change that’s causing the Amazon rainforest to burn, it’s big business, politics, and the demands of international markets; i.e. money. But even though the cause of the fires is directly due to the region’s agribusiness, an industry theoretically controllable by governments and the will of the people, their negative effects will likely hit on a global scale and be frighteningly untamable.

A good, quick video summary of what’s happening in the Amazon from vlogbrothers.

Money is undoubtedly the cause of the rainforest fires because it catalyzes the cycle of local agribusiness expansion, which is slowly tightening a noose of scorched land around Brazil’s ever-shrinking cornucopia of wild life, breathing foliage, and indigenous peoples. That noose, which actually slowed down its rate of constriction significantly after 2004, only to ramp back up starting around 2012, has now claimed roughly 20% of the Amazon rainforest, and is projected to reach 27% by 2030.

Brazil’s agribusiness sector, which is instigating much of the fires, is expanding into the country’s claimed portion of the Amazon (Brazil has ownership of about 60 percent of the Amazon rainforest) because it needs space to raise and feed cattle. In fact, 80 percent of the deforestation of Brazilian-owned rainforest is dedicated to cattle ranchers according to this Yale School of Forestry and Environmental Studies report cited in The Washington Post. That cattle, which needs ever-expanding amounts of pasture and soy fields, is eventually turned into meat, which in turn is consumed overwhelmingly by Brazilians (about 80 percent), along with outside markets including Hong Kong, China, Iran, Egypt, and Russia. The U.S. is number six on the list of consumers.

It’s critical to note that the dip in the Amazon’s deforestation rate beginning around 2004 occurred because the Brazilian government decided to step in and mitigate the amount of rainforest that could be converted into usable land for businesses. As the Los Angeles Times notes, “the Brazilian government began cracking down on forest destruction [in 2004] by designating more protected areas and reserves for indigenous people. Violators were fined or arrested and forest loss declined 75% by 2012.”

The rate of deforestation in Brazil’s rainforest has continued to increase on the whole since 2012 and already spiked to its highest level in eight years in 2019 despite the year not being over. This spike has been largely attributed to the 2018 election of Jair Bolsonaro to Brazil’s presidency. The Intercept notes that as president of Brazil, Bolsonaro is committed to accelerating the deforestation of the Amazon in the name of progress. He and his associates in the Brazilian Congress and Amazonian state governments are doing their best to eliminate laws and agencies aimed at protecting the environment, which could get in the way of agribusiness. Brazilian agricultural workers, who are often poor like the indigenous inhabitants they’re displacing, have already begun more aggressive efforts to make room for cattle and feed. 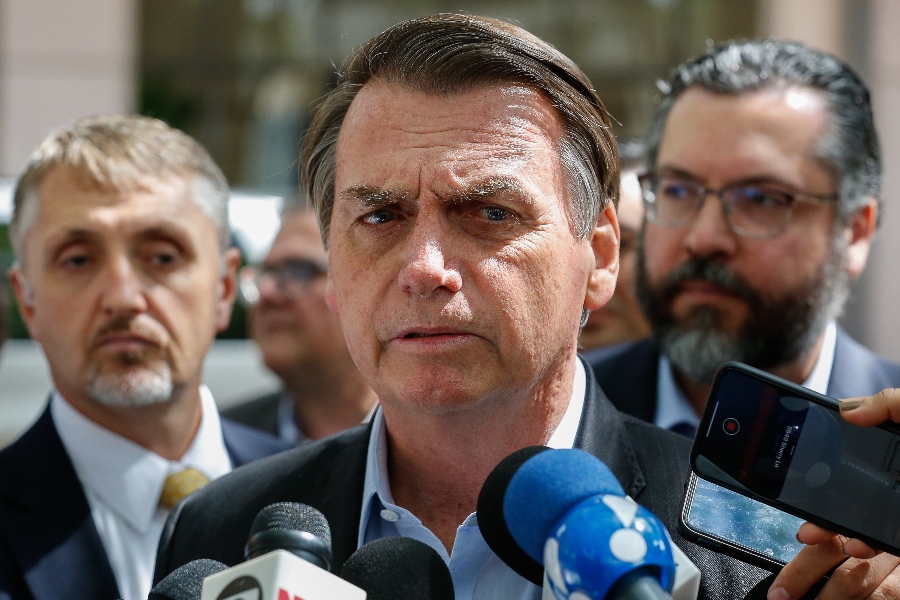 While agribusiness, the meat market, and governmental neglect are to blame for the fires, the effects of the overall deforestation campaign will be felt across the globe if nothing’s done to halt it. Even though the idea of the Amazon rainforest producing 20 percent of the world’s oxygen is misguided, the rainforest is still a sink for carbon dioxide. YouTube channel Atlas Pro notes that if the Amazon rainforest were completely eliminated, an amount of CO2 equivalent to three-to-five times the global annual output would be released into the atmosphere.

Detrimental effects from this gargantuan release of carbon dioxide wouldn’t be isolated to Brazil or even South America either. Much of the newly released carbon dioxide in the atmosphere would be absorbed by the ocean, resulting in an increase in water acidity. These higher-than-normal levels of acidity would kill off marine life, which would further increase the amount of CO2 in the atmosphere thanks to hindering the ocean’s ability to act as a carbon sink itself.

Perhaps worse would be the effects on Earth’s weather systems. The Amazon rainforest is a major source of evapotranspiration, which is the process by which water is taken from soil by plants and evaporated into the atmosphere. (When you look at those pictures of the Amazon rainforest from space, the little white clouds all are due to evapotranspiration.) As deforestation increases, the Amazon’s levels of evapotranspiration decreases, meaning less water, less clouds, and less rain in the air across the planet. If this trend continues, it could result in droughts in numerous countries, which would, in all likelihood, set off another chain reaction of large-scale societal issues. 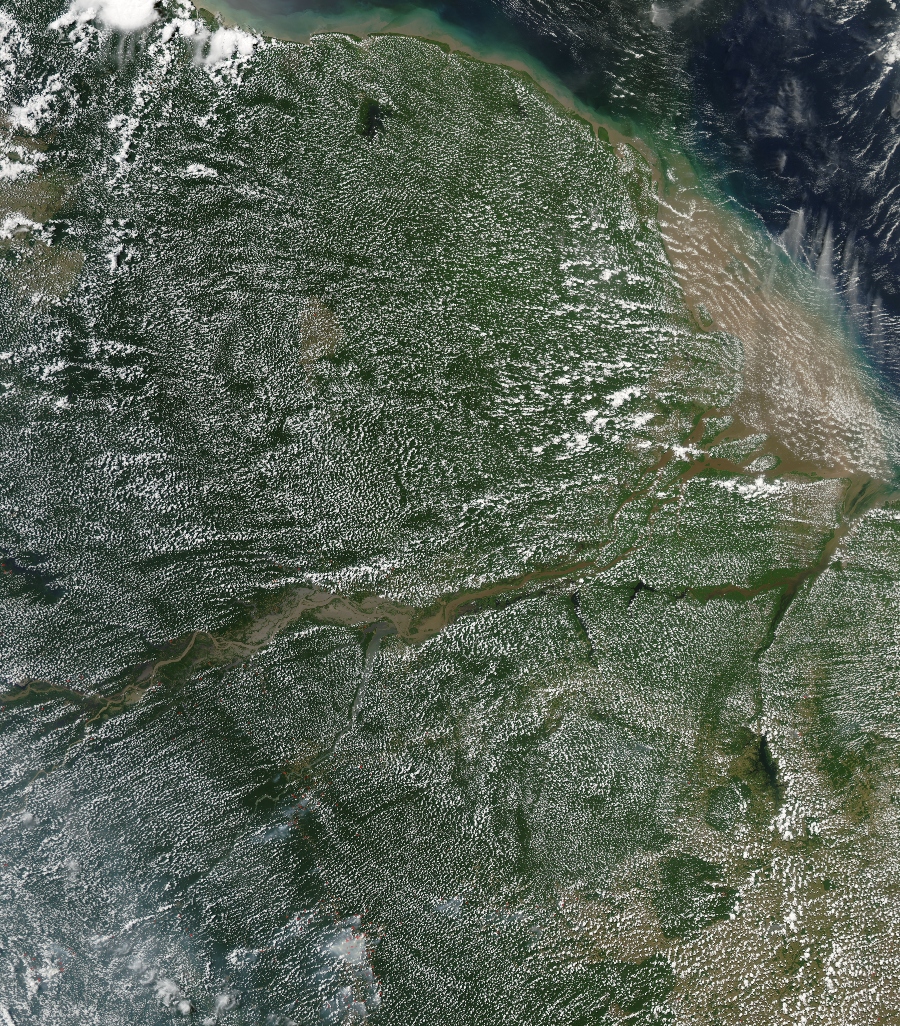 How can we stop it?

But the effects of deforestation in the Amazon shouldn’t be the focus right now; the immediate focus should be on what people can do to help slow or stop what’s causing the destruction of the rainforests in the first place. To that end, some changes to your daily habits that could benefit the Amazon are given in this Adventure Life article. Basically the advice is to reduce your consumption of oil, paper, and meat, and support organizations that are fighting against agribusiness’s advances in the region. And even though those may seem like small, distant acts, we’re beginning to see, in a very painful way, how people and their actions are inextricably linked across the world.

What do you think of what’s happening in the Amazon rainforest? Do you have any ideas about how to stop the march of profit-driven deforestation? Let us know in the comments.