A Leap of Faith: How One Couple Opened Their Own FLGS and Escape Room - Nerdist

A Leap of Faith: How One Couple Opened Their Own FLGS and Escape Room

Kevin and Laura Martin were passionate gamers who wanted to bring their joy of the gaming to Plainfield, Illinois. After researching the industry, going to the GAMA trade show, and exhausting their options to find funding, they took a leap of faith and borrowed from their 401K to open their game store.

“It was really scary,” Kevin said. “We had no experience in the industry, but we just said, ‘Let’s do this.”

Nearly five years later, the Wandering Dragon Game Shoppe is thriving and offering the local community plenty of options for their gaming needs. In addition to selling the latest games and accessories, hosting game demos, tournaments, and open game nights, the store also rents out semi-private gaming rooms in four-hour blocks and has its own escape room.

“Five years ago if you would’ve told me we’d have an escape room I would’ve thought you were crazy,” Kevin laughs. 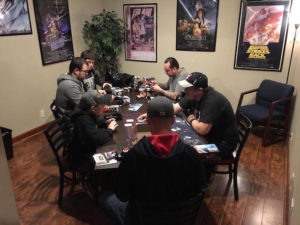 While the Escape the Wizard’s Chamber! escape room wasn’t in their original plans, neither was losing their original space after only six months of being in business when the owner decided to sell the building. Because of their love of the area, the Martins scrambled to find a place to stay in downtown Plainfield.

“We saw this new building and it didn’t look like much from the outside, but when we walked in it was like a Tardis,” Kevin said. “It kept going and the layout had a big room in the back for tournaments. It was perfect.”

The new location was nearly double the size of the original and there were individual rooms that would become the rentable gaming rooms and, eventually, one of them would morph into an escape room.

“At first, we weren’t too sure about an escape room, but the more we thought about it, it was perfect,” he said. “It’s a live action adventure. It fits right into what we’re trying to do with the Wandering Dragon. And now we’re working on the second one that we’re hoping to open this summer.”

Exploring new avenues in gaming comes naturally for the Martins. They were gamers before they had their son, took a break during his early years and returned to gaming when he was old enough to join them. The family game nights of Dungeons & Dragons, Rune Wars, and Descent: Journeys in the Dark (“the creepier the monsters, the more my son loved it”) eventually became trips to store-run tournaments of Magic: the Gathering and Arcane Legions.

“It just blossomed and into a whole other world,” Kevin said. “I would look over [at another table] and my wife would be trash talking, laughing, and having a great time playing. I’d look over at my son and he’s doing the same thing. These were folks that we just met in these tournaments or wherever we’d play and we had a great time. And some of them to this day are still our great friends. We consider them part of our family.”

A trip to their first Gen Con convinced the Martins that Plainfield could be home to a gaming store. “Gen Con opened our eyes to what this whole community and what this hobby is all about,” Kevin said. “We wanted to do something like that [here], and grow the hobby and the community that we love.” 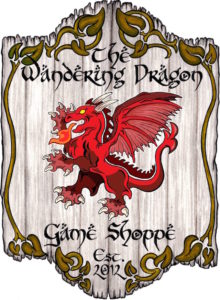 Even after many 80-hour weeks, the passion and commitment to family-friendly gaming remains. They try to sneak in a game or two before the work week begins and recently began hiring new employees to ease the workload. During their downtime, the family enjoys going to the movies and bird watching: “At our home, we have a bird bath and feeders in the back and bird watching is something we’ve grown attached to.”

As the Wandering Dragon Game Shoppe continues to expand and serve the Plainfield area, Kevin reflects on what he feels tabletop gaming has meant to him and his family, from his son’s academic success (“He’s an honor roll student and we really believe it’s part of him growing up with D&D and Magic, learning problem solving and math”) to the space they offer to the community.

“It’s like a bar without alcohol,” he said. “Everyone gets together and doesn’t necessarily know each other. They can come to an event, demo, tournament or whatever not knowing each other  and walk away as friends.”

Have you taken a leap of faith in gaming? Tell us in the comments!