A History of Captain Marvel's Many Costumes - Nerdist

A History of Captain Marvel’s Many Costumes

With the release of the newest trailer forÂ Captain Marvel, anticipation is at an all-time high for Marvel Studios‘ first woman-led superhero movie. But Carol Danvers,Â starting out as Ms.Marvel, then having switching codenames, has had a long comic book history before Brie Larson’s forthcoming portrayal. Carol also has a long history of different costumes, some amazing, and some tragic. Let’s take a look at the evolution of her style. 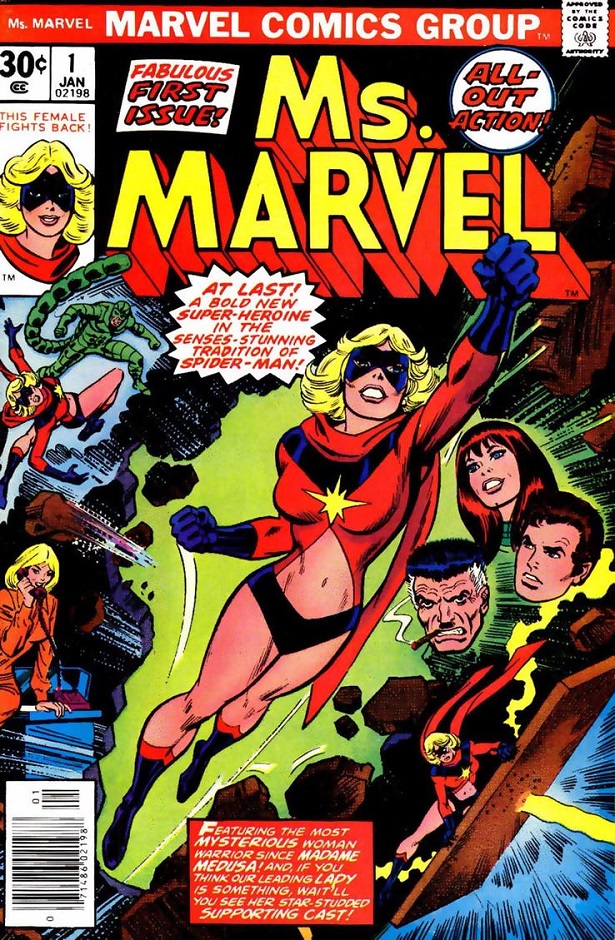 Carol Danvers’ first look was something so very of its time that it’s kind of comical now. Although she had appeared as a supporting character in the pages of the male Captain Marvel’s title as far back as 1968, she first received powers and became Ms.Marvel in 1976, headlining her own series. She had a John Romita designed outfit that was based on Mar-Vell’s costume — only with bare midriff and bikini briefs instead of covered, functional design. She had a scarf instead of a cape, but perhaps most indicative of the era, she also had Farrah Fawcett inspired feathered hair. 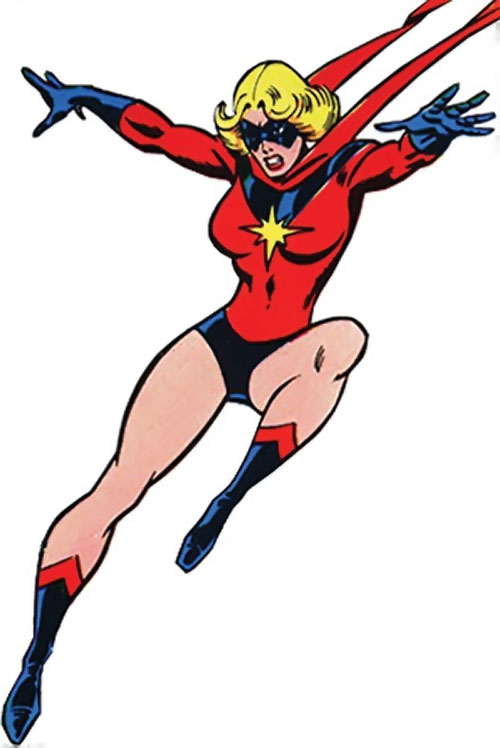 When artist Dave Cockrum took over the title, he immediately made changes to her costume, by getting rid of the bare midriff and bare back. Technically a small change, the new design instantly made the costume a lot less gratuitous and overly sexualized. Not that there is anything wrong with a character wanting to show some skin and be sexy (see: DC’s Starfire, who comes from a culture of always-horny aliens). But nothing about no-nonsense Air Force Captain Carol Danvers’ personality would suggest she was into wearing something that sparse. Good riddance. 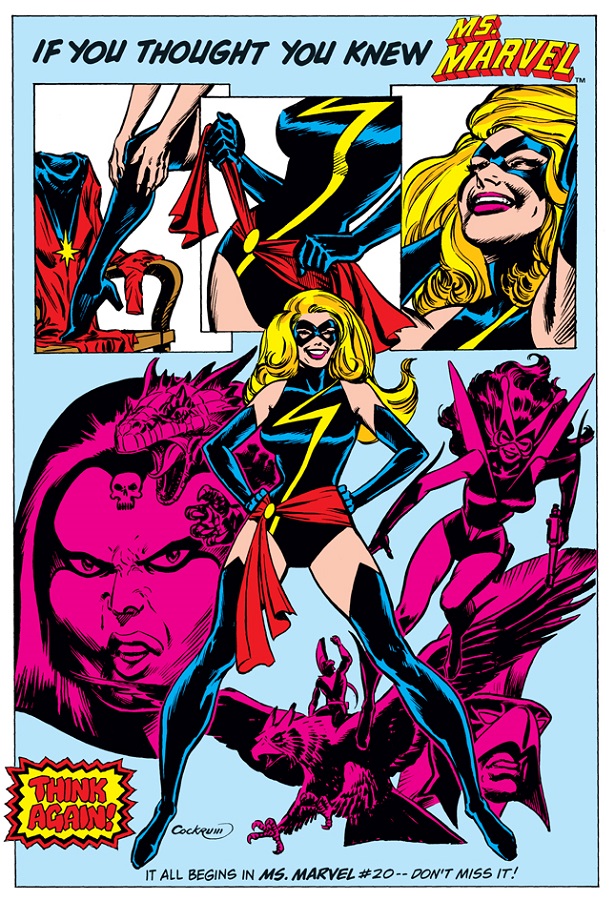 Dave Cockrum was not done with fixing Carol’s look though. In issue #20 of Ms. Marvel, he teamed up again with his Uncanny X-Men collaborator Chris Claremont. Just a few years before, they took boring ‘ol Marvel Girl and transformed her into the Phoenix, giving her a truly memorable and iconic look. Taking a page from Jean Grey’s redesign, Cockrum gave Carol a very similar outfit, that while still too revealing probably by today’s standards, was still a big step forward from the original costume, except for those high heels. He also gave Ms. Marvel a very dramatic sash, (made out of her old scarf!) a staple of his designs for female heroes. While Carol’s costume would change a few more times over the years, the sash would always return, even for characters named Ms.Marvel who weren’t Carol. 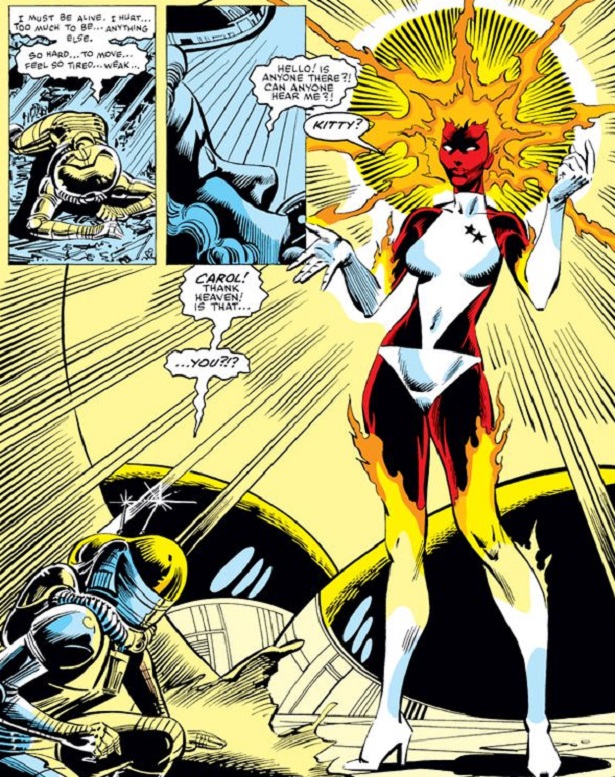 After several years of appearing in Avengers, Ms. Marvel became a key player in Uncanny X-Men, when the mutant Rogue absorbed her powers and personality, leaving Carol depowered. But Carol wasn’t totally down for the count quite yet. On a mission in space, she got a cosmic upgrade (much like Jean Grey). She was now called Binary, had red skin and flaming hair, and of course, a Dave-Cockrum-designed costume. This costume actually had flames incorporated, because if you’re going to go cosmic, go COSMIC. 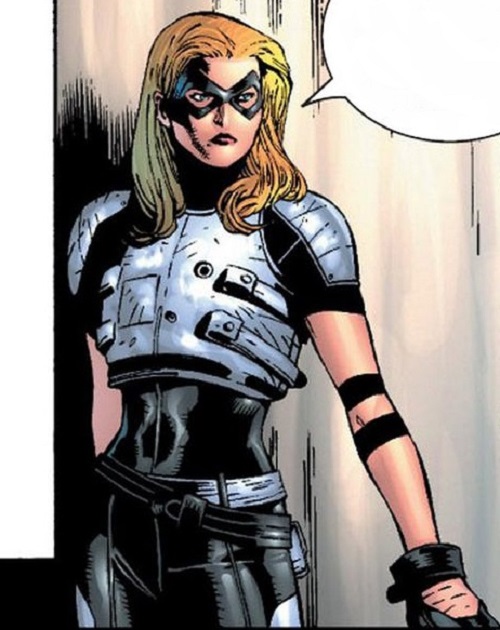 In the late ’90s, Carol returned to Earth, and her Binary powers were reduced significantly, but she was still way more powerful than she originally was. She rejoined the Avengers as one of their heavy hitters, and returned to her Ms. Marvel name and costume. She wore the classic 1978 look well into the mid-2000s. before beingÂ  given another new costume by Avengers artist Olivier Coipel. While this look was way more functional and less bathing suit-esque, it also lacked any personality. No one wanted Carol Danvers to look generic. 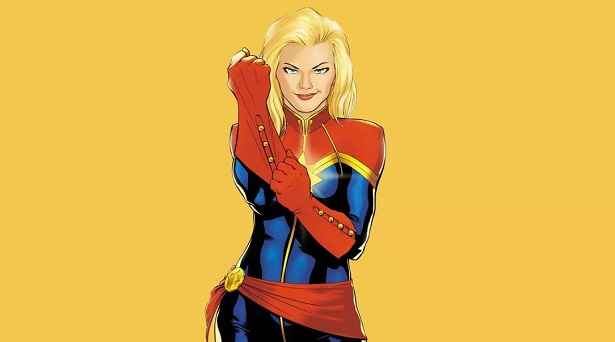 Finally, in 2012, Carol ditched the Ms. Marvel name and officially became Captain Marvel. Her new costume was a variation of Mar-Vell’s look, only with the red and blue reversed. But artist Jamie McKelvie decided to keep one aspect of Carol’s previous Ms. Marvel costume–her sash (a decision I fully endorse, even if the movie costume leaves it out). In the six years that Carol has worn this costume, it has become her most iconic, and that will no doubt be cemented asÂ theÂ Carol costume once she wears a variation of this on screen.