A Guide to MAGIC: THE GATHERING Pre-Release Events: 5 Lessons Learned By A Newbie - Nerdist

A Guide to MAGIC: THE GATHERING Pre-Release Events: 5 Lessons Learned By A Newbie

Interested in Magic: The Gathering? Check out our show, Spellslingers, where you can watch, learn, and laugh as Day[9] and guests tap cards, here on Geek & Sundry!

The first time I thought seriously about taking the plunge into Magic: The Gathering was when I wrote about the Magic Open House events that took place on April 15th. I’ve always been familiar with Magic, as that “behind the counter” game that every game store seems to sell. Already having a gaming budget that feels like the GDP of a small country, I was hesitant to find something else to spend money on but figured the Open House was a great way to try the game, get some cards and figure out if it was for me or not. So my partner, our kid, and I hit up our local FLGS for the Open House, grabbed some cards, played some games, and were invited to the Amonkhet prerelease events taking place the next weekend.

Armed with 5 whole days of experience, I took the plunge and headed off to the midnight release. I’ve done midnight releases (for video games) before, although truthfully, not for the past decade or so, and felt completely comfortable heading to the game store for midnight. Here’s what I learned about Magic prerelease events by attending one. 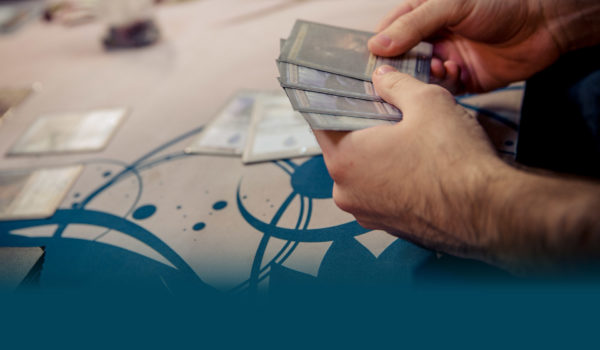 Every other midnight release I had been to, last a few hours and then you head back home, goods on board. Not Magic. See, in addition to the prerelease pack (more on that later), they also host a tournament with the number of rounds depending on the number of people there. I was registrant #71 at my local FLGS, still naive with the thought that I would be home in a couple hours. As a matter of fact, I was so naive that the partner who stayed at home with our child decided to stay awake and wait for me. Neither of us were prepared.

Based on the number of registrants, this prerelease tournament was going to go 7 rounds. With each round taking one hour and the first 90 minutes being set aside to hand out prerelease packs to that many people, open booster packs and build a deck to play with, that gives you an end time of 8:30am. That’s the amount of time many trans-continental flights take.

I had no stimulants to help me through what would be my first all-nighter in years. Budding entrepreneurs, here’s a tip: I would have paid $50 for a coffee around the 4am mark.  You can probably make a lot of money from the first timers like I was with a thermos full of sweet caffeine. You can pick us out by seeing the fear in our eyes, and the bags beneath them.

That said, not all pre-release events happen at midnight (thankfully), so talk to your local gaming store to find out what events they’re running during prerelease weekend. 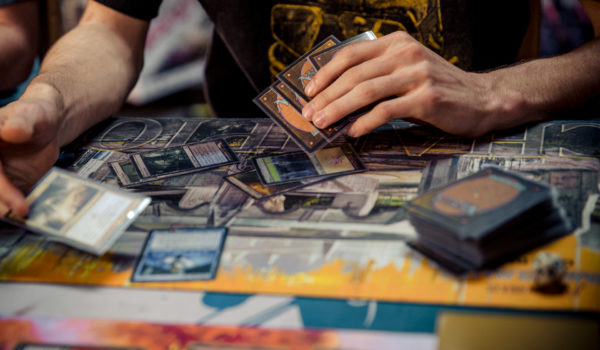 The #1 question people asked me all night was, “Did you get any good cards?” Since I had been playing Magic for less than a week, all I could do is shrug my shoulders and sheepishly explain this fact. Even more stress-inducing is that after opening all of my boosters and admiring the artwork, the organizers call out, “20 minutes until round 1. Finish building your deck!” I panic. What am I supposed to do? How many cards? I only have 2 land cards out of these packs! Relax and breathe.

The Magic community is incredibly helpful and kind. I happened to be crammed at the table with another rookie and an experienced guy who’d been playing for years. He helped both of us build our 40 card decks by giving advice (start with 17 land cards, choose the types based on the colours in your deck), and asking us questions (are there any cards you really want to take?) instead of just doing it for us. This experience was incredible because he was teaching us to be Magic players. Here are some guidelines, take what you want to fill in your options. There was no judgment, or even attitude. Best of all, I looked around the room and saw this tiny act of kindness being replicated all over the place. Gamers love sharing their passions and this was an opportunity for the deeply converted to work on converting the newcomers.

3. YOU CAN BUILD A COLLECTION QUICKLY (YAY!) 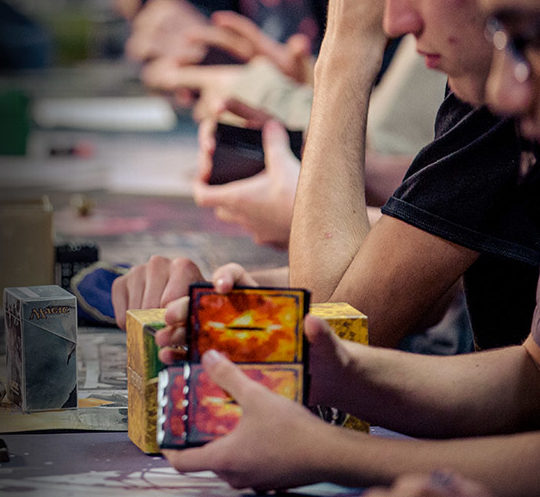 Having only attended the Open House a week earlier, my entire collection of Magic cards consisted of the two 30 card decks and 1 foil land card that make up the intro decks. This meant that even if I wanted to play a larger game with a full green deck, I couldn’t because I only had 30 green cards. The prerelease pack is incredible. You get six 15 card booster packs, one guaranteed foil card and even a cool, themed D20 to serve as a life tracker. In addition to the midnight release, I attended a 2-Headed Giant event with my partner and my daughter later that weekend, so all told we walked away with 4 of these prerelease sets. That’s 360 cards, or as we discovered after the weekend a, “How are we going to store all of these cards?” amount of cards.

4. THE BOOSTER DRAFT FORMAT IS THE GREAT EQUALIZER (OR: YOU CAN WIN GAMES)

So despite having played for less than a week, I managed a win-loss record of 3-4 on Friday night and 2-2 for 3rd place on Sunday when playing 2-Headed Giant with my kid. Does this mean that my 8-year old and I are some kind of Magic savants with unnatural skills? Nope! It means the format is GREAT for new players. See, in a prerelease event, the fact that I owned literally no Magic cards didn’t matter. Decks can only be constructed using the cards from your prerelease box. In 2-Headed Giant, you can freely share cards between partners, so you do end up having a few more options when building your deck, but otherwise you are restricted to those 90 cards you drew. 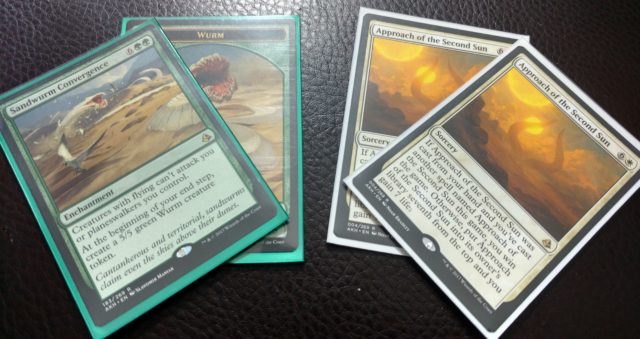 The store running the event had land cards you could borrow to make any deck you wanted to work, so you have to build a 40 card deck using the 17 suggested land cards out of ONLY the 90 cards that came in your prerelease pack. Sometimes you get lucky and get a super powerful rare (or three, like I did, with my Sandwurm Convergence, or both me and my kid getting boosters that contained an Approach of the Second Sun) that your opponent just has no answer to. It’s all the luck of the draw, which means that if you get some great boosters, your inexperience and lack of a huge collection doesn’t put you at a severe disadvantage.

While in a standard format Magic game, you’re playing a form of list chicken, where the depth of your deck is only limited by the depth of your collection. You try to build a deck that has answers to everything. In a booster format (which the pre-release events are)  you can’t possibly have an answer to everything. So you try to hedge your bets and build the best deck you can. Is it the best deck at the event? Hardly. Does it have a chance (with a bit of luck on your draws) to beat other decks there? Absolutely.

5. THE BEST PART; YOU WILL HAVE FUN, LEARN, AND PLAY (LOTS OF) GAMES 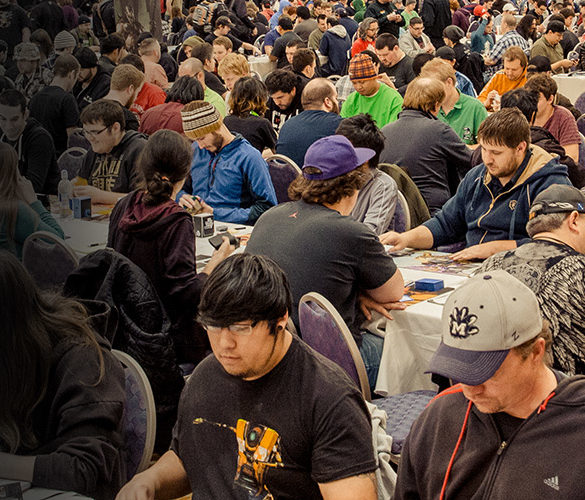 After your packs are open and your deck is built, the only thing left is for you to play games and have fun. This is fundamentally the best take away from my prerelease event. All of the stress from not knowing what I’m doing, and anxiety that I seriously underplanned for the ensuing all-nighter melts away when you start playing games. I managed to connect with people and make friends because of the casual, best-of-3 tournament format. We talked and played games, commiserating about the entire lack of sleep and how almost all of us had Saturday plans that didn’t involve sleeping (like driving my daughter for a daycamp 100 kms outside of the city on no sleep) but we were all just having fun.

As mentioned earlier, the community is incredibly welcoming and kind. It also takes a certain kind of person to want to forego sleep to play games all night. I didn’t know it at the time, but it turns out that certain kind of person is exactly my kind of person. Excitement and passion are infectious, and that, along with a pile of awesome new cards, was my takeaway from the weekend.

Want to delve deeper into this world? Magic: The Gathering’s prerelease event for the newest set, Guilds of Ravnica, is happening September 28-30th 2019 and is the perfect time to get in – just stop by your friendly local gaming store for more information!

Learn to play Magic: The Gathering!

TAGGED: Amonkhet, Prerelease, Wizards of the Coast, Magic: The Gathering