Geek & Sundry’s Painters Guild is a show where we show you how to elevate miniatures, whether they’re for your board games, RPGs or miniature wargames. Available exclusively on  Alpha, you can learn tips and techniques to build and paint miniatures with host Will Friedle.

Wargaming has an incredible diversity inside its hobby—crafting terrains, mini-painting, painstakingly complex strategy, and the magical siphoning of your bank account. There is, however, the perception that wargaming is only about minis and strategy. Walking through Adepticon (one of the larger conventions dedicated to the hobby) certainly reinforces a player vs player focus, but also showcased a different way to play in narrative wargaming campaigns. With enough time and planning, wargaming can facilitate one hell of an immersive story game. 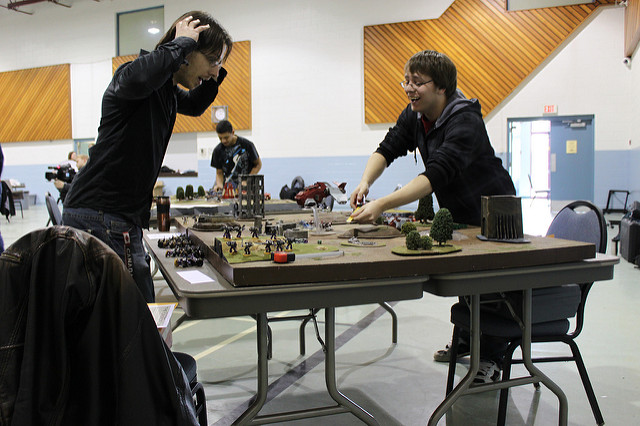 Narrative wargaming is not new to the scene, but the teams over at The Corvus Cluster and Warzone Apothis have put great campaigns together. Complete with in-character blogs, video campaigns, narrations, and how-to guides, these websites are worth following for both veterans and new players alike.  Games Workshop’s Global Campaigns like the Fate Of Konor happen on a regular basis at conventions and your local Game’s Workshop store, allowing an easy and convenient way for everyone to get involved.

At it’s most basic level, miniature wargaming is an insane excuse to trash army-point buys, and actually use the crazy figurines you’ve painstakingly built and painted. More dedicated campaigns, blur the line between tabletop and wargaming. One moment you are playing your Ork characters dakka dakking away like any other roleplaying game at a table in classic RPG format. The next, you find yourself accused of heresy and you’re defending your planet from an invasion using whatever army you’ve scrambled together.

Games like Battletech end themselves to a format that supports both tabletop and wargaming miniatures, but games like Necromunda take the cake. I’ve used Necromunda: Savage Wastes as supplemental material in my home-brew tabletop campaigns for a while, and Blood Bowl is a sports campaign on steroids (literally) perfect for this hybrid style. The “campaign” is a season and you as the manager take care of your violent athletes and set them in an arena to earn you money, but level up after each bout.

No matter what style of war campaign you want to tell, the goal stays the same; each mission using the minis tells a story. Furthering the campaign one mission at a time. The advantage over traditional tabletop is superb scaling. A narrative war campaign can conquer solar systems, support 12-15 players, and allows you to mix veterans with boxes of armies with newbies side by side. In order to do this, you need to plan your attack ahead of time. Unlike tabletop storytelling, you can’t wing a session on the fly as easily.

You will need a few things to get started. If you are seeking to run a campaign, you’ll need a significant amount of time for planning. Don’t undercut yourself with assuming that a handful of dice and some character sheets will work. Each session or game can take 4 hours or more, and on the GM side, you must triple that. Once you swallow that pill, you can take a look at some pre-made campaigns out there. There are tons of fan-made content out there to get started. They’ll cover the rules set, the setup, how many players, and walk you through what to expect.

In a typical setup, the players build their armies with point counts, then conduct the nail-biting conquest using those minis, with a roleplaying session tossed in the mix. After each adventure, they earn more experience points that allow them to recruit or recover their losses and grow their army. In between the on-the-table sessions, keep the campaign momentum going. This is where written blogs come into play, or even side roleplaying games where the generals can conduct their downtime adventures before heading back to the table again. You’ll need your own minis but since it’s not a player vs player tournament, you’re free to release the shackles and toss down some truly custom creations.

Because narrative wargaming has large gaps in between story highlights, your narration windows become less filled with player agency and roleplay, and more like cinematic movies and cutscenes. It’s important that when you are engaging in these tales you really hammer home emotions more than normal. Kill favorite NPCs, have tragedy befall their beloved animal companions, or go ahead and frag grenade half the party 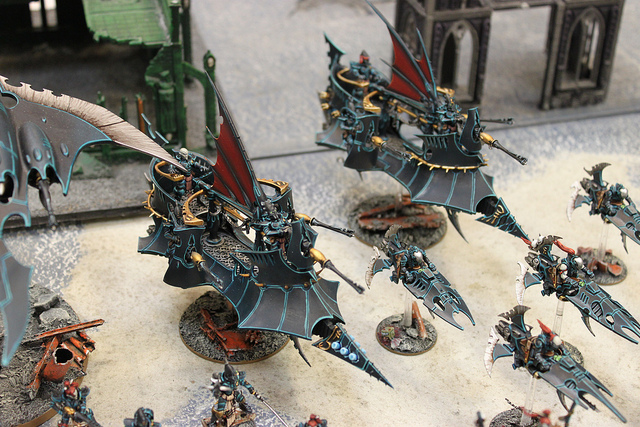 When describing a pyrrhic victory you’ve got plenty of material to work with, the high cost of warfare, after all, is a tried-and-true storytelling tactic. The tricky part comes when the players absolutely decimate the opposition. How do you keep a compelling wargame when it’s a downhill battle? Artificially inflating challenges lead to player frustration, and getting mired down in rules calls to ensure it’s a fight is boring, so avoid those if you can. All you have to do is remember the players are part of a larger war machine. Their amazing victory on one planet, is the stronghold they held onto while three others were destroyed—and then let players build their army from there. In a narrative campaign, there should always be another battle over the horizon, until the very end of the game.

Have you played in a narrative campaign? Or know any group that is putting on some fantastic con-events? Tell us about your experience below!