Every Friday at 4:00 PM PT, a talented crew roleplays their way through the galaxy to fulfill a mission: to boldly go where no one has gone before. Follow the adventures of the USS Sally Ride on Shield of Tomorrow on Twitch and Alpha.

The new civilizations of Star Trek have rich histories and cultures. Many episodes across all the series revolve around pivotal elements like Pon Farr to explore our own human culture by depicting alien rituals. A few of the alien species have been richly detailed because of their popularity, but only one has spun of a language that’s received its own dictionary, been taught in colleges around the world and even has a translator just a few clicks away. Most sci-fi franchises are happy to get a frak or a gorram into the geek lexicon, but the Klingons have breathed life and honor into their language. 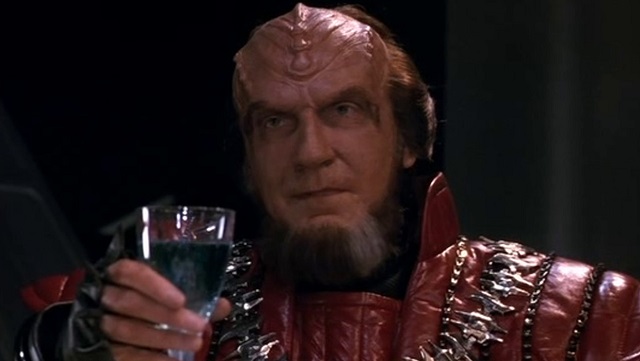 The origins of the Klingon language can be traced back to members of the original crew of the Enterprise. When Klingon dialog was needed for Star Trek: The Motion Picture, James Doohan created the few words needed and taped them for the other actors to use. Director Leonard Nimoy and Harve Bennett decided that they wanted the main Klingon villains of Star Trek III: The Search For Spock to speak a language with real structure and semantics rather than the improvised syllabics created by Doohan.

They contacted Marc Okrand, a linguistics professor at the University of California, Santa Cruz, with whom they worked with before on Vulcan phrases for Star Trek II: The Wrath of Khan. Okrand expanded the language from Doohan’s original dozen words, mixing in unusual sounds and vowel pronunciations to make Klingon sound alien to Star Trek fans ears. The tlh sound seen in the language, for example, is a common element of Native American languages (Okrand’s field of Earth expertise), but is not well-known to speakers of North American English.

Okrand published three books that gave real heft to the fictional language; The Klingon Dictionary which looked at the language from a linguistic point of view, The Klingon Way full of proverbs and quotations important to the culture and Klingon for the Galactic Traveller full of phrases and short sentences essential for when the universal translator isn’t quite working right.

It’s generally estimated that there are around 20-30 fluent Klingon speakers on planet Earth, and there are even stories of linguist, d’Armond Speers,  who tried to teach his young child to speak Klingon fluently from birth. The child did pick it up as if it were a native human language (though the child stopped responding at the age of five, as Speers seemed to believe his child “did not enjoy it.”). That’s unsurprising, given the structure of Klingon is described by a linguist Arika Okrent, who studies constructed languages in her book In the Land of Invented Languages, as one that “flouts and follows known linguistic principles”.

As a result, all sorts of Earth culture has been expressed using this fictional language. Plays have been performed in it, including Shakespeare, of course. Translation searches exist on the internet with the sophistication to be able to select difference dialects of the language or learn to speak it using the latest smartphone innovations. Fans can even play Monopoly in the original Klingon with this bilingual set.

Moreover, it lets linguists like Okrand contribute to creations like ‘u‘, the Klingon opera for which he co-authored the libretto and debuted at the Hague in 2010 and has been played around the world.

Whether learning the language to play a more authentic Star Trek Adventures character or sneaking a few phrases to be able to curse in front of polite company, the Klingon language is another great example of something wholly fictional becoming all too real.

What is your favorite Klingon word? Tell us in the comments! And be sure to tune into our Star Trek RPG show, Shield of Tomorrow on Geek & Sundry Twitch and Alpha every Friday starting at 4 PM PT, followed by our aftershow on Alpha, Behind The Shield, where the crew discuss the episode and topics like this one.