9 Romance Anime That Will Melt Your Icy Black Heart - Nerdist

9 Romance Anime That Will Melt Your Icy Black Heart

Happy Valentine’s Day! Today is that magical day of the year where you either give your significant other a gigantic box of chocolates or sadly weep into a box of chocolates of your own before eating them, then remarking how a little human sea salt was apparently exactly what Russell Stover needed. Regardless of your relationship status though, you can find solace in anime! So on today’s episode of The Dan Cave, get ready to live vicariously and love vicariously through some of the best romance anime you need to see before you die. Alone.

His and Her Circumstances Have you ever wanted to be the very best, like no one ever was? What if you WERE the very best, then the equivalent of Gary Motherlovin’ Oak blew up your spot and stole the title? But then what if you kind of fell in love with Gary Masterblastin’ Oak? That’s basically what happens in His and Her Circumstances. It’s the story of Yukino Miyazawa, an egotistical perfectionist who has always been at the top of her class. At least she was until she goes to high school and gets scholastically dunked on by Soichiro Arima. What starts as a rivalry soon blossoms into something deeper and what follows is a disarming, thoughtful romance about being honest with yourself that will force you to be honest about the fact that you lowkey love this series. Better known as Boys Over Flowers, Hana Yori Dango is the story of Makino Tsukushi, a student at the prestigious Eitoku Academy, an elite school that caters to the obscenely rich. Unlike the rest of the students at Eitoku, she can barely afford to be there. Even more unlike the rest of the students, she doesn’t put up with any crap from the Flower Four, the powerful students who are the de facto rulers of the school, especially when they pick on her friend. Although they try to bully Tsukushi and declare war on her, her resilience earns the F4’s respect and more importantly for the purposes of this episode, the affections of one in particular, the sensitive violinist Rui Hanazawa. Is this the only love story involving a violinist in this article? I’d tell you, but that’s a spoiler. Are you into ‘bot stuff? No, get your mind out of the gutter. I’m talking about anime about robots. Chobits is a weird sci-fi romance about a world in which people can buy expensive androids called “persocoms” that basically function as personal assistants. It’s a little hornier than most of the entries on this list, but who am I to judge? As a broke college student, Hideki Motosuwa can’t afford a persocom…until he finds one lying in the trash. When he turns it on, she can only say one word: “Chii.” With no memory and no existing programming, Hideki begins to teach Chii about the world and gets caught up in a deadly mystery along the way: Chii might not be just another robot; she could be a legendary Chobit, an android capable of real human emotion and thought. I know it sounds kind of like a lost episode of Black Mirror, but like most CLAMP series, it’s well worth your time. Takeo Gouda isn’t your average high school student. No, he’s what scientists would refer to as “a towering beefcastle.” Although his hulking size and brute strength make him popular with the other boys at school, they scare most of the girls away. To make matters worse for Takeo romantically, most of the ladies at his high school are exponentially more attracted to his handsome best friend, Makoto. But all that seems to change after Takeo saves a young woman, Rinko Yamato, from a creep on the train. Although Takeo presumes that Rinko has a crush on his best friend like everyone else, he soon learns that love stories come in all shapes and sizes–even for towering beefcastles like himself. An anime that launched a thousand term papers, Revolutionary Girl Utena is a complex, thoughtful coming-of-age story that subverts classic fairy tale archetypes and examines some seriously heavy themes in a mixture of magical girl-meets-fantasy. The titular Utena is a young woman who wants to grow up to become a prince, having met a kind prince as a child. As a student at Ohtori Academy, she engages in a series of duels in order to win the hand of the Rose Bride, a fellow student named Anthy. And it only gets weirder and wilder from there. What follows is a wonderful, sexually charged anime full of darkness, romance, betrayal, and all manner of tropes which is expertly deconstructs. But more than anything, it’s a transgressive queer love story that stands the test of time. They say that opposites attract and in the case of Toradora, they are absolutely correct. It’s the story of two high school students: Ryuuji Takasu, a guy with an intimidating exterior but a heart of gold, and Taiga Aisaka, a sweet-looking girl who is a tiny bundle of fury if you cross her. Although they don’t get along, they agree to help one another win their crush’s heart. But through their attempts at playing Cupid, they soon find themselves falling for one another despite what they initially thought. So if you’re looking for an exceptionally charming rom-com, I tsun-dare you to give Toradora a shot.

While it may not be a traditional romance story, the romantic tension in the hit ice skating anime Yuri!!! on Ice is undeniable. Yuri!!! on Ice tells the story of Yuri Katsuki, a professional figure skater who suffered a terrible loss at a massive competition. One day while moping about at home, Yuri decides to reenact the incredibly complex routine of Russian skating champion Victor Nikiforov, and unbeknownst to Yuri, it is secretly recorded and goes viral. When Victor sees it, he travels to Japan in order to train Yuri and help him get another shot at at the championship. Yet the competition is only half the appeal for many fans; the real reason to watch Yuri!!! on Ice is the incredibly sweet, sincere, and honest relationship that forms between Yuri and Victor. In a genre characterized by heightened reality and bombast, Yuri!!! on Ice achieves a rare subtlety with its romance that’s harder to pull off than any triple lutz. 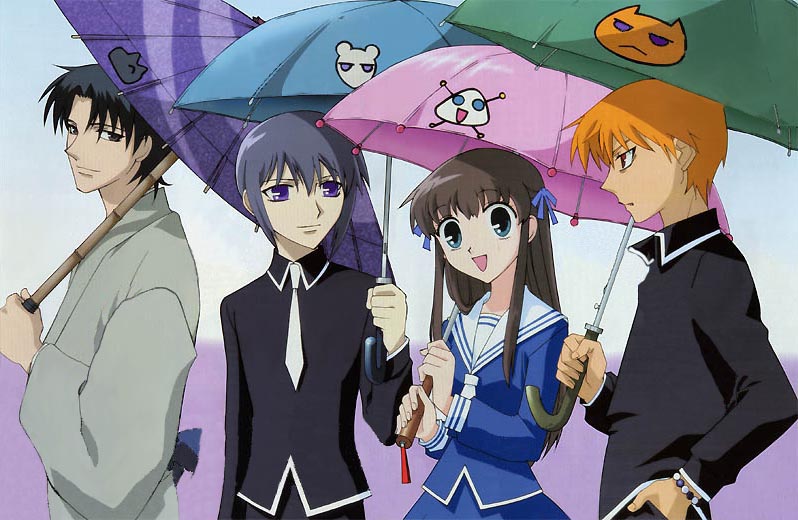 A high school girl named Tohru Honda is taken in by the mysterious Sohma family after her mother dies in a car crash and she suddenly finds herself homeless. The Sohmas are a weird, wild bunch and like most anime families, they harbor a terrible secret. They have been cursed by the spirits of the Chinese Zodiac and they transform into their animal avatars when they’re hugged by a member of the opposite sex. As you can imagine, hijinks ensue, but so does an incredibly sweet love story as Tohru finds herself in a romantic game of cat and mouse with the aloof Yuki, who literally turns into a mouse, and the hotheaded Kyo, who turns into a cat. You’ll laugh, you’ll cry, and if you’re me you’ll secretly wish that you could turn into a dragon.

Your Lie in April After his mother passes away, the once prestigious pianist Kousei Arima can no longer bear to play music. Two years pass and he still can’t bring himself to tickle the old ivories. But when Kousei meets a stunning violinist named Kaori Miyazono, she strikes a chord with him, helping the melancholy musician realize that he should let go of the fermata in his heart because it’s hammer time at long last. By which I mean he should start playing the piano again. Anyway, forced piano lingo aside, Your Lie in April is a really sweet and slightly melodramatic love story that will likely be music to your ears.And those are some of the greatest romance anime that you need to see. Which is your favorite? What would you add to this list? Let me know in the comments below!