Since its launch in 2017, Star Wars: Forces of Destiny has been a total joy, packed full of gorgeous animation, cool character designs, cute nods to original canon, and a radical focus on the women of the Star Wars universe. Disney just released eight new shorts as part of Season Two, and they’ve really upped the ante in terms of exciting reveals, classic characters, and expansions of important canon. Joining the cast of the new trilogy, Mark Hamill even makes his first vocal appearance as young Luke Skywalker in the swamps of Dagobah! We’ve watched all of Season Two and picked out the eight raddest revelations, character beats, and “Oh Wow!” moments that you won’t want to miss. 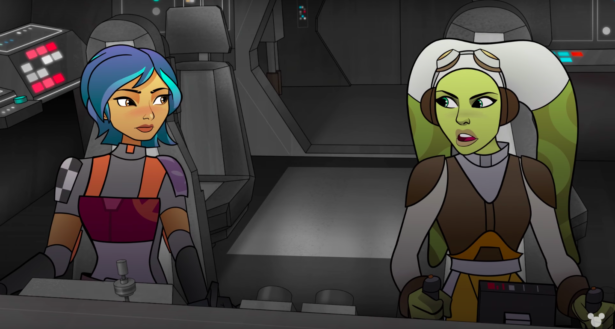 The first episode of this season is a lovely nod to the recently concluded  Star Wars:Rebels, and reunites Hera and Sabine. Judging by Sabine’s blue hair, we’re guessing this is around season two in the Rebels timeline. This cute caper sees Hera, Sabine, and Chopper attempt to steal an Imperial shuttle but accidentally splitting up with the two women flying a shuttle full of Stormtroopers whilst Chopper enjoys an Empire-free flight! It’s a nice little reunion for some already very missed characters. Episode two sees a pair of fan favorites join forces, and it confirms a major fan theory in a heartbreaking moment that had us welling up. When Anakin plans a secret romantic mission away with Padme, his plans are thwarted by Ahsoka, who’s encouraged to join them by Obi-Wan. At first Anakin is annoyed, but when they end up in a Separatist block the trio work together to escape. This is (chronologically) first time we’ve seen all three of them together, and the final moments confirm that Ahsoka did know about Padme and Anakin’s romance but kept her master’s secret! Was that what she meant at the end of The Clone Wars Season Five when she said “I know”? We think it just might’ve been… 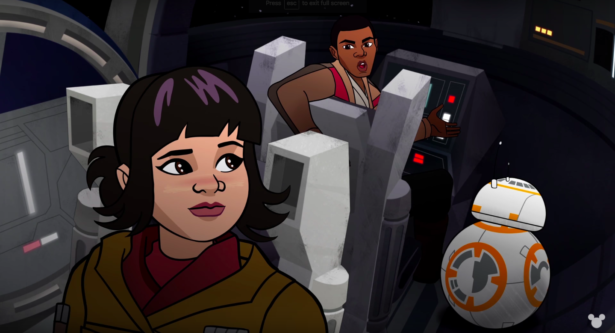 We all know Finn was a stormtrooper, but as we know he was also a maintenance worker who heroically rebelled against the First Order and joined the Resistance. At the end of The Last Jedi he pilots one of the old ships on Crait, leading many fans to wonder where he learned to fly. Well, in Rose Tico’s first appearance in Forces of Destiny we get to see that she was the one who encouraged Finn to take the wheel while she fixes BB-8 during the pair’s journey to Canto Bight! 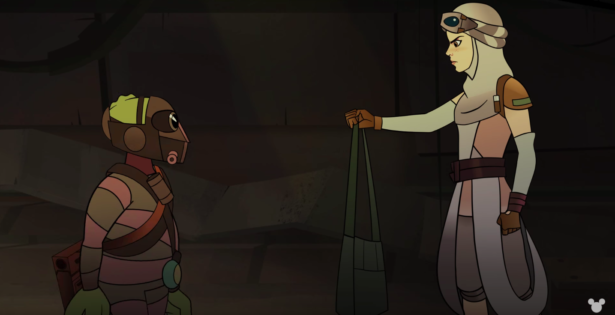 When we first meet Rey in The Force Awakens she’s a lonely scavenger living in the sandy dunes of Jakku. Forces of Destiny has done a great job of expanding on Rey’s life on the desert planet, but Season Two gives us a fantastic insight into her relationship with the alien Teedo, who attempted to steal BB-8 at the beginning of Episode VII. This short is a wonderful example of how much world-building and character development they can do in under three minutes. The sixth entry this season gives us not one but two awesome moments that build on important parts of main Star Wars canon. The first is a gorgeous interaction between Leia and Maz, which is extra special because we know that we’ll never get to see them together on film. Canon-wise, though, it’s ultra-exciting because it reveals that before Return of the Jedi Chewie and Leia went to Maz to ask for help saving Han from his carbonite prison! 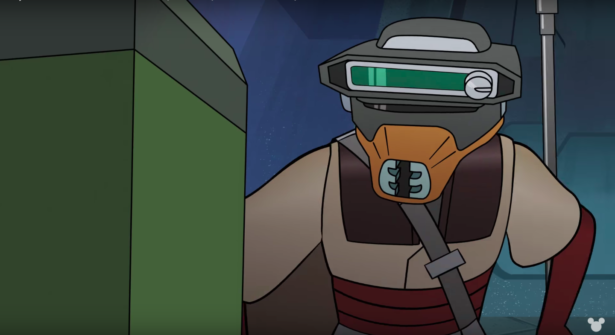 During Leia and Chewie’s mission to help Han, Maz comes up with a plan, one that we later see in action during Return of the Jedi. She suggests that Leia needs a disguise and then, as if the Force willed it, the bounty hunter Boushh appears in a very familiar suit! YEP! Forces of Destiny really just answered one of the biggest Star Wars fan questions: “How exactly did Leia get that bounty hunter suit?” We love this moment that builds on two rad female characters whilst also expanding on an iconic moment in Star Wars history! Luke’s training on Dagobah is arguably one of the most memorable parts of the OG Star Wars trilogy. The dank swamps, the harnessing of the Force, the sometimes hilarious positioning of Yoda over Luke’s shoulders. In Mark Hamill’s first appearance in Forces of Destiny, he returns to Dagobah playing a young Luke Skywalker, struggling to use the Force to find his way through the trees until Yoda suggests that he carry him. Luke is stunned, implying this is the first time his master has asked, giving us a look at a vital and previously unseen moment in the pair’s relationship. 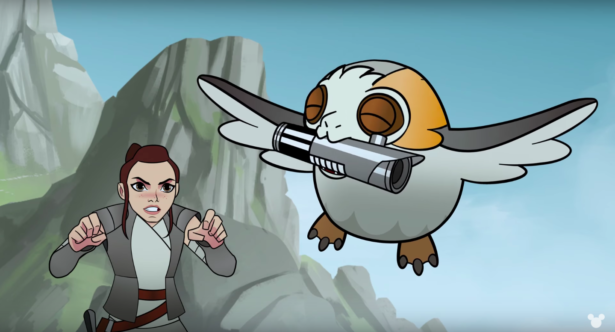 Our last and funniest favorite moment isn’t a huge canon reveal, but it does feature Rey training alone on Ahch-To when a porg suddenly steals her lightsaber. It’s a cute, canny use of the short for some simplistic cartoon fun, especially as Rey only manages to stop the cuddly critter by using the Force. Levitating porgs definitely could have fit into the sometimes humorous tone of The Last Jedi, but seeing as Rian Johnson deprived us of that, Forces of Destiny is here to fulfill our Force-juggling porg needs!

Have you watched Forces of Destiny? Do you have a favorite moment we missed? Delighted to know Hamill is voice acting again? Let us know below!

The Last Jedi is a LOT like Empire Strikes Back