5 Ways To Get Your Fallout Tabletop RPG Geek On - Nerdist

5 Ways To Get Your Fallout Tabletop RPG Geek On

War hasn’t changed for Fallout fans since the first Fallout video game was released way back in 1997. Almost 20 years later, the series is still going nuclear, with Fallout 4 about to get its 4th and final DLC, Nuka-World.

But even with 8 pretty cool Fallout video games and their multiple add-ons, there’s still one major gaming element missing in the Fallout universe: an official Fallout tabletop RPG.

Fellow Geek & Sundry writer Courtney Kraft recently wrote about 5 Franchises You Want Adapted Into Tabletop RPG Campaigns, and rightfully included Fallout on the list. With this follow-up article, I’m gonna point you to a few Fallout-inspired tabletop RPGs that you can play right away. Grab your Pip-boy and a few companions, and see if these games feed your Fallout craving!

In 1980, 17 years before the first Fallout, the first edition of The Morrow Project post-apocalyptic tabletop RPG was published by TimeLine Ltd.

The Morrow Project “is based around the idea that a group of American industrialists predicted the coming of an apocalyptic nuclear war, and began to create a plan for an emergency operations and reconstruction infrastructure that would survive that war. This plan is the eponymous ‘Morrow Project.’ A number of volunteers were cryogenically frozen in hidden bunkers called boltholes. They were provided with caches of supplies and equipment, intended to help the teams rebuild civilization—once the war had ended and the resulting nuclear fallout had diminished enough.”

TMP players “wake up” about 150 years after World War III, and must take on the tremendous task of rebuilding civilization while confronting a world full of mutated creatures spawned from the holocaust.

From the looks of it, The Morrow Project hits the nail pretty square on the head with theming. If you’re looking to pick up the game, The Morrow Project 4th Edition sourcebook can be purchased from TimeLine’s website, and from the publisher’s DriveThruRPG page. 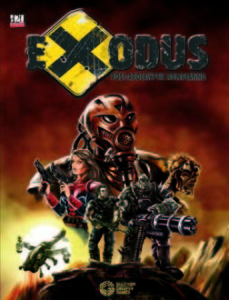 An official Fallout tabletop RPG, Exodus, was started in 2006, using the d20 Modern system rules. Glutton Creeper Games obtained a license from Interplay and hoped to publish the game, but then Bethesda Softworks’ lawyers jumped in and annulled the GCG/Interplay deal, forcing GCG to remove all Fallout references from the game.

GCG continued to develop the game, and Exodus was published in 2008. Exodus is set in the American southwest in the year 2042. Players take on the roles of survivors of a 20-year exodus from worldwide nuclear fallout, and now must work toward shaping a new future for what remains of the human race.

In 2014, Glutton Creeper Games became a subsidiary of 4 Hour Games, which offers the Exodus sourcebooks for sale on its website. So if you wanna play the game that was almost the Fallout tabletop RPG we’ve longed for, give Exodus a try.

Retrocalypse is but one of many examples of just how much some gamers want to play a Fallout-themed tabletop RPG. It is a fan-made, CCAN licensed, free game system based on the Ennie Award-winning Old School Hack system. Retrocalypse includes all the Fallout elements you’re probably familiar with, including the drastically-important Karma system (looking at you, Fallout 4).

There’s also a Retrocalypse digital tabletop simulator available over on Roffelchen’s Workshop Steam Community page. Roffelchen made extensive use of the Retrocalypse pdf and the Fallout Wiki as primary sources. Simply subscribe to the page and download the simulator for free. 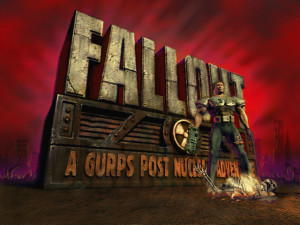 The free 81-page pdf is almost as extensive as The Morrow Project, but is designed for players already familiar with GURPS. It introduces all the common Fallout elements, and explains how to modify the Fallout rules system to work with GURPS. So if you already know and love GURPS and want to get into the Fallout groove, GURPS: Fallout is all you need.

Savage Worlds is another generic roleplaying system akin to GURPS, and has also been used to bring Fallout into being.

A motivated London blogger and gamer, Yves Geens, has been blogging about how to work and play Fallout in the Savage Worlds system since 2010. On Geens’ Savage Fallout blog, you’ll find downloads for the Overseer’s Handbook, Wasteland Survival Guide, blank Fallout character sheets, and premade Fallout characters. Unique locations, 1-shot adventures, and numerous other Fallout blog posts are also available. When you’re ready to try our favorite post-nuclear roleplaying game with the Savage Worlds system, be sure to make use of this excellent blog.

As a long-time grognard, and big fan of Fallout Tactics: Brotherhood of Steel, I want to leave you with one last recommendation. Fallout: Warfare is more wargame than RPG, and is focused on playing out battles between small and medium-sized forces. If you ever wondered how a BoS squad would fare against a horde of Beastlords, or want to add Warhammer 40K-like skirmishes to your Fallout campaign, Fallout: Warfare has the rules you’ll need to make it happen.

Until we get an official Fallout tabletop RPG, we’ll have to make do with these unofficial ones. From the look of them, that’s not a bad thing at all.

Which one(s) of these have you played? Which are you eager to try out for the first time? Share your Fallout tabletop RPG adventures in the Comments below!