Everyone knows that Star Wars was created by George Lucas, and without him there’s no saga. Period. But several other key people were factors in making Star Wars into STAR WARS, the cultural juggernaut. Producer Gary Kurtz, designer Ralph McQuarrie, and John Williams for starters. But there is another name you might not be as familiar with, and that is Marcia Lucas. George’s first wife was an editor extraordinaire, and a very key figure in crafting A New Hope. 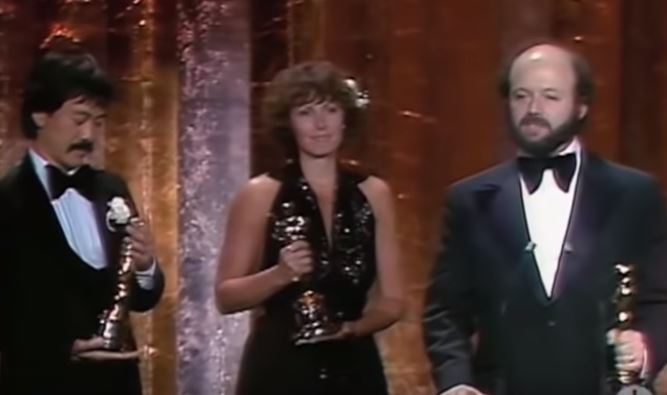 But who is Marcia Lucas? Long before Kathleen Kennedy, Daisy Ridley, and the contemporary women of Star Wars, there was Marcia, Marcia, Marcia as the significant woman behind one of pop culture’s greatest franchises. One of the most prolific editors of the 1970’s, Marcia Lucas was nominated for an academy award for her work on Taxi Driver and won an Oscar for the work she did on Star Wars. As the original film that started it all approaches its 42nd anniversary, here are five ways in which Marcia Lucas helped to give the galaxy far, far away its beating heart.

Chewie and The Mouse Droid

It’s the moment in A New Hope where we all really fell in love with Chewbacca. Chewie lets out a mighty growl on the Death Star, and a tiny mouse droid peels away in terror. Chewie gives an “oh well, sorry ’bout it” shrug, and we instantly are endeared to him. George Lucas nearly cut this scene, and it was Marcia Lucas who saved it.

In the book, The Secret History of Star Wars, Mark Hamill says “When the little mouse robot comes up when Harrison and I are delivering Chewbacca to the prison and he roars at it and it screams and runs away, George wanted to cut that and Marcia insisted that he keep it.” This is another example of George Lucas not fully understanding the need for whimsy and fun in these movies, and Marcia completely grasping why a movie like this has to have those moments to win over the audience.

George’s process for writing Star Wars was sending around draft after draft of edited versions to get people’s notes, and then massage the script with that feedback in mind. But it is now commonly held knowledge that Marcia was the most influential voice for George in those conversations, and she suggested many of the “human” moments in the Saga.

Among those moments was the famous kiss “for luck” that Leia gave Luke on the Death Star. In a 2013 interview with Film Freak Central, Mark Hamill said, “I know for a fact that Marcia Lucas was responsible for convincing him to keep that little ‘kiss for luck’ before Carrie [Fisher] and I swing across the chasm in the first film: ‘Oh, I don’t like it, people laugh in the previews,’ and she said, ‘George, they’re laughing because it’s so sweet and unexpected’—and her influence was such that if she wanted to keep it, it was in.”

The Death of Obi-Wan

Originally, Obi-Wan Kenobi was supposed to survive the duel with Vader, and run off with Luke, Leia, and Han. But it was Marcia Lucas who insisted that Lucas kill off Obi-Wan in that pivotal moment, realizing that he really doesn’t contribute much to the proceedings after that, and just stands around. But his death in the final film stands as one of sci-fi cinema’s most iconic moments.

In a 1977 interview with Rolling Stone, Lucas said ” I was rewriting, I was struggling with that plot problem when my wife suggested that I kill off Ben, which she thought was a pretty outrageous idea, and I said, “Well, that is an interesting idea, and I had been thinking about it.” Ben’s death was an unexpected moment for audiences, and it widened the nature of what the Force was, not to mention allow for Yoda to emerge in the next movie, once Ben was gone as a flesh and blood mentor.

This is possibly the single greatest editing contribution Marcia Lucas made to Star Wars. Although the film has two other credited editors, Marcia Lucas focused on editing the final “trench run” on the Death Star. Many say she saved the entire final act by adding a sense of urgency. In the book The Secret History of Star Wars, author Michael Kaminski says “The Death Star trench run was originally scripted entirely different, with Luke having two runs at the exhaust port; Marcia had re-ordered the shots almost from the ground up, trying to build tension lacking in the original scripted sequence.”

Marcia Lucas almost never talked about Star Wars publicly for several decades after her divorce from George Lucas in 1983. But in 2017, she gave a rare on-camera interview on the making of Star Wars, where she mentioned her work on the trench run sequence. “If the audience doesn’t react when Han Solo flies the Millennium Falcon, this movie’s not going to work.” And she wasn’t wrong. It’s now considered to be one of the greatest action sequences in film history, and the template for so many similar scenes for the next forty years of action movies.

Return of the Jedi

Marcia Lucas isn’t credited on The Empire Strikes Back, although there are various unconfirmed reports that she did help. However, even though they were in the midst of getting divorced, Marcia did help edit Return of the Jedi. And once again, the scenes that she helped edit gave that movie its emotional core. According to The Secret History of Star Wars, she edited both the deaths of Yoda and Anakin Skywalker. These emotional farewells are part of the heart of Luke’s journey in the film, and her last significant contribution to the original trilogy. What a legacy to leave behind.