5 Ways CAPTAIN AMERICA: CIVIL WAR will Differ from the Comics

This May, the Marvel Cinematic Universe kicks off its phase 3 with Captain America: Civil War. Just like in the comic, written by Mark Millar with art by Steve McNiven, this film will be pitting Captain America against Iron Man over whether or not the government has the right to regulate superhero activity. Their friends are now forced to choose sides, and some may not make it out in one piece. You can check out the newest trailer from our friends over at Nerdist.

Looking deeper, that may be where the similarity to the comics ends. There have already been many changes to these iconic characters from page to screen. The founding members of the Avengers are a perfect example. In the comics, Ant-Man and the Wasp helped form the team. Cap, Hawkeye, and Black Widow did not appear until much later. The changes in Civil War will be no different. Here are five of them we can prepare to see come May 6th.

Captain America: Civil War has Nothing to do With Secret Identities

“I am Iron Man” (Please read with the same irritation Nick Fury said it in the post-credits scene). With those three words, the MCU became a much different place than its comic book counterpart. None of the heroes have secret identities. Thor is not Donald Blake. Captain America is wearing more of a helmet than a mask. After the Battle of New York, everyone knows who the Hulk is. Black Widow and Hawkeye are government agents from the start. They didn’t NEED them. In fact, the only hero in the MCU who has a secret identity is the one that hasn’t even been introduced yet, Spider-Man. That leads to our next difference. 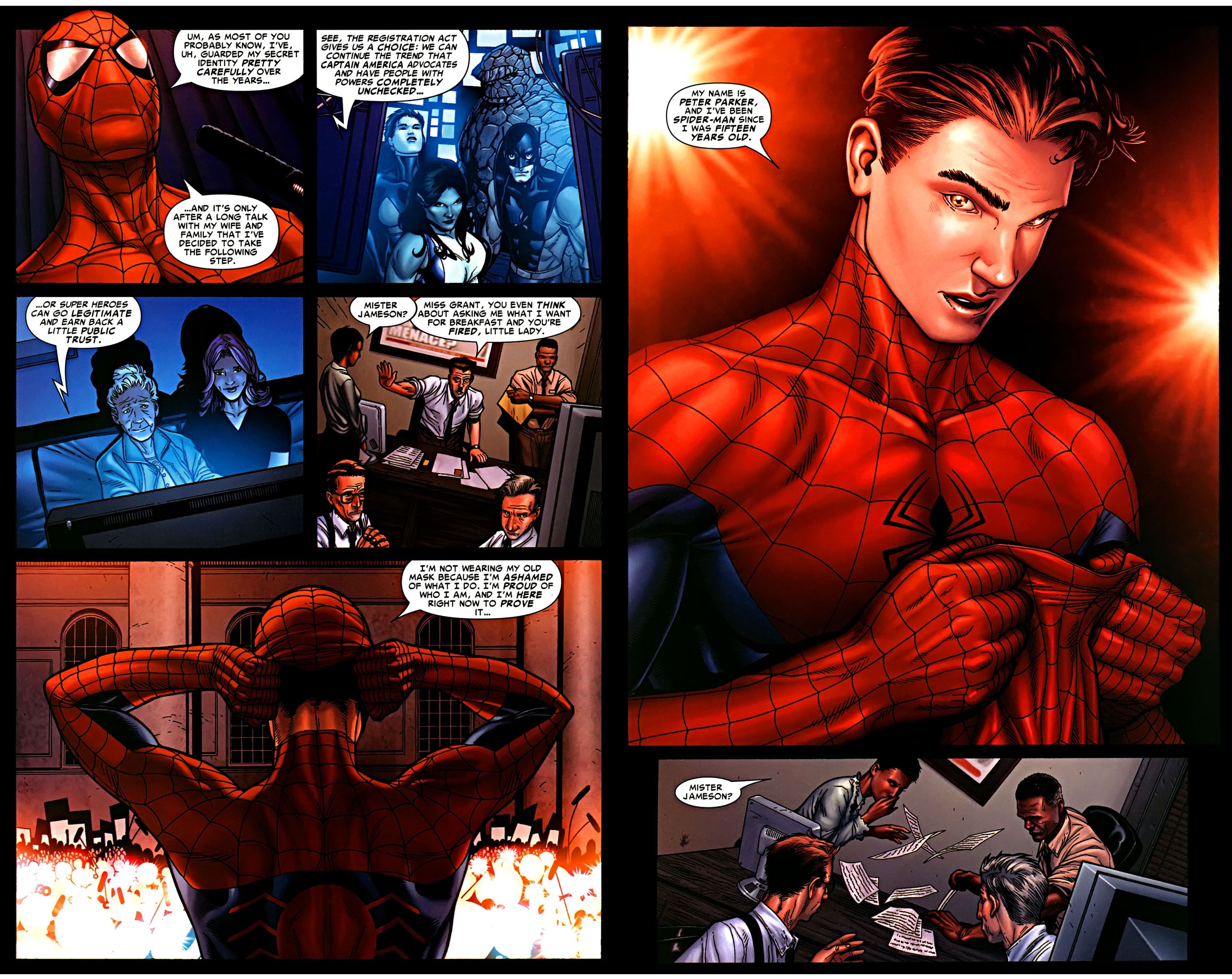 One of the pivotal moments in Civil War is when Spider-Man sided with Tony Stark and revealed his identity to the world. In the comics, this was a huge moment, as Spider-Man was then known as one of the world’s greatest heroes (or greatest villains, if you ask J. Jonah Jameson).

While it is confirmed that Tom Holland’s Peter Parker WILL be featured in Captain America: Civil War, this will be Spider-Man’s debut into the MCU. To have a big press conference and reveal the identity of a hero no one has heard of, to the world that already knows the identities of the Avengers, would seem out of place. The good news for fans is that we will get to see a new take on the Wall-Crawler in this game-changing film.

In the comic version of Civil War, the Registration Act served as a way to regulate the entire superhero community. That’s hundreds of costumed heroes. The MCU currently has roughly 10 superheroes that they need to keep watch over. This is important because it will really question how vital these 10 heroes are to the world, as well as demonstrate that even though they are small in number, the world can still be extremely afraid of what they don’t understand. I’m looking forward to seeing how they structure the same points and arguments with a much smaller number of people. 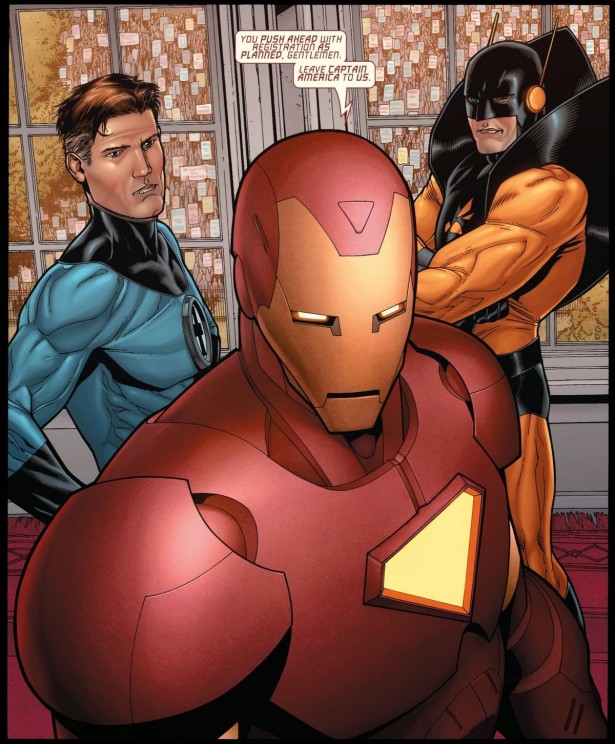 At the end of issue two of Civil War, Iron Man agrees to bring in Captain America to the authorities. In the room with him are Reed Richards and Hank Pym. Pym also helped Stark design “Number 42,” the prison used to hold all of the world’s super villains as well as unregistered heroes. He was just a part of pro-registration as Tony was.

In the MCU, it’s a different story. THIS Hank Pym is much older, having been an agent of S.H.I.E.L.D. as Ant-Man until the death of his wife Janet. The beginning of Ant-Man shows his falling out with S.H.I.E.L.D., which at the time was run by Tony’s father, Howard Stark. When Scott Lang asks him why they don’t call the Avengers to help stop Darren Cross, Pym explains how after the events of Age of Ultron, he doesn’t trust Stark one bit. If Pym makes a cameo in CA: Civil War, it doesn’t seem likely he will be siding with Iron Man. 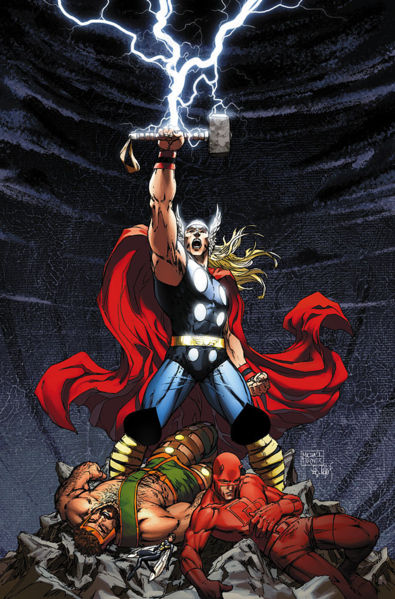 While 2017 will see Hulk and Thor team up in Thor: Ragnarok, I am actually referring to the clone of Thor created by Reed, Tony, and Hank in the comic. During this time, the thunder god was thought long dead, so to help even the odds against Captain America’s underground group, they created what they thought was a new ally out of the remnants of one of their oldest friends. Things went tragically wrong as this clone, not having the moral compass of the original Thor, killed Goliath (Bill Foster) during one of the series many battles. Even though they were able to shut him down, the clone eventually escaped and became Ragnarok. For those He-Man fans out there, think of Fakir, except with Thor.

The creation of Ragnarok and the death of Bill Foster was a “point of no return” during the series, where a lot of allegiances change. The movie version will not have Ragnarok (or a Reed Richards to help create him), so the “point of no return” will have to change. The question is, which of these characters that we’ve grown to love since 2008 will make the sacrifice Bill Foster did?

While these five differences are important, we know there will be plenty more. What moments in the comic are you hoping make it to the screen? What are some other changes you know will occur that we missed (we only listed five, so we know we missed a few)?

ALL IMAGES AND VIDEO: MARVEL COMICS/DISNEY