5 Things We Love About GHOSTS OF SALTMARSH for D&D

Over the past few weeks, Wizards of the Coast has dropped a bunch of announcements for their upcoming D&D products, including the first book for 2019, Ghosts of Saltmarsh. This nautical themed collection of adventures has been highly anticipated since its announcement in February. We sat down with our copy of the book and bring you our favorite bits of treasure from its pages.

Fifth edition continues its slow and steady expansion away from the Forgotten Realms with the town of Saltmarsh, the central hub of the adventures in this book. Greyhawk is one of the oldest settings for the game and the area sketched out around the central fishing community is sketched out just enough to be able to set a campaign in the classic world. DMs with games set elsewhere don’t need to worry too much, though. Each adventure has a sidebar offering tips on how to set the game in other Dungeons & Dragons settings like the Forgotten Realms or Eberron, which is getting a full hardcover book of its own towards the end of the year.

The book draws adventures from Dungeons & Dragons‘s extensive history of modules. It’s similar in this way to 2017’s Tales From the Yawning Portal but the sea focus focuses some better advice to thread these different adventures into a cohesive campaign. The Saltmarsh Trilogy—The Sinister Secret of Saltmarsh, Danger at Dunwater and The Final Enemy—have a well-deserved reputation as old-school fan favorites. It’s easy to see why; these adventures focus on elements outside of the typical dungeon crawl that D&D is most famous. Sinister Secret of Saltmarsh is more of a mystery investigation, Dunwater encourages diplomacy and roleplaying, and The Final Enemy offers a rousing final battle protecting Saltmarsh from a looming threat detailed in the earlier adventures.

Of Ships and the Sea And Also Wandering Monsters 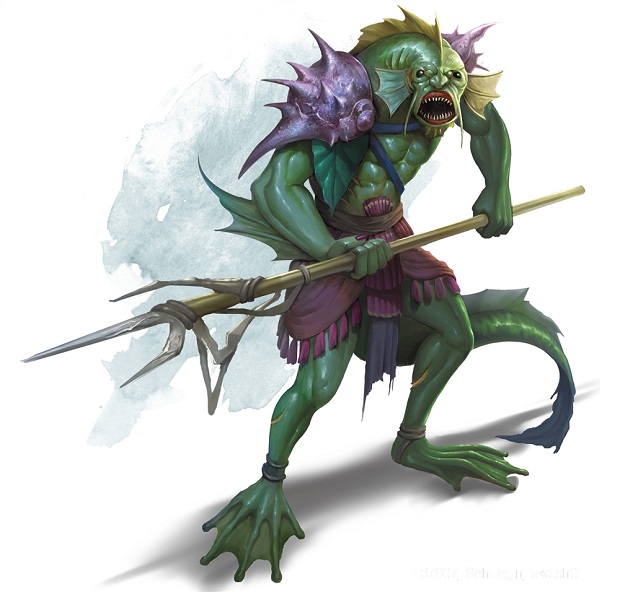 There’s also a lot more going on in between the complete adventures collected in the volume. Rules for ships and ship battles are collected here with minor tweaks from their appearance in Unearthed Arcana. Tables looking for cannon rules should seek them out on Dungeon Master’s Guild as there aren’t firearms in Greyhawk. There are also wandering monster tables suited for long sea adventures but there are also mini adventures waiting to be fleshed out in between the main adventures. It reminded us of the plot point format from Savage Worlds: the full adventures are the big draw, but the other ones provide connective tissue that can be filled in with bits and pieces from player backstories.

It looks like we won’t be getting a player’s options book this year; instead expect those elements to be scatted through the different books coming out. Ghosts of Saltmarsh doesn’t disappoint in this area. Not only does the book devote space to fitting in existing backgrounds to the Saltmarsh/Greyhawk setting, it also gives players three new complete options as well; Smuggler, Fisher and Shipwright. While the Shipwright’s ability to offer a quick burst of MacGuyver style healing to the player’s ship works well with the ship rules, our favorite is the Fisher’s ability to win people over by telling an outrageous story about what happened to them while out on the sea.

Sweet magic items and powerful weapons are always enjoyed by players, but we have never seen an argument over who gets to keep a bit of treasure bigger than the one for this book from the stash of Sanbalet, the big bad of the first part of The Sinister Secret of Saltmarsh.

A pirate’s life for me

Rob Wieland is an author, game designer (Star Wars RPG, Firefly RPG, Camelot Trigger) and professional nerd. who  occasionally tweets and livestreams RPGs with the  Theatre of the Mind Players while his meat body resides in scenic Milwaukee, WI.