5 Rules For Teaching The Most Complex Tabletop Games - Nerdist

5 Rules For Teaching The Most Complex Tabletop Games

Some of the best games are also the hardest to teach. We all know the pain of watching some of your favorite games gather dust because you can’t get anyone to sit through the 2 hour tutorial. This is why Code Names and Cards Against Humanity do so well; you can learn them quickly and they delivers maximum fun.

But what about the games with more than five rules? How do you teach the game efficiently and effectively so you can have that game night you’ve been dreaming of? A Game Of Thrones: The Board Game fans, this one’s for you.

Here’s our example of how to do it right. Would you believe someone can teach you Twilight Imperium in about 30 minutes? “Impossible!” you say, “No one can live at that speed!” But it’s true. The legendary and venerable Twilight Imperium can now be taught and played in the same day.  This YouTube video from “RTFM” (and host Shea Parker) teaches one of the most complex games in half the time of anyone else. How did he do it? Lets use Shea’s game explaining opus as an example; here are 5 tips for teaching games the right way.

1 – KNOW WHAT YOU ARE GOING TO SAY 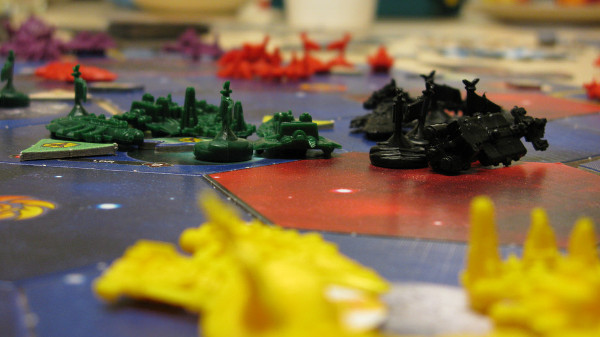 One of the benefits Shea had in making this video was the ability to write in advance. He sat down and figured out the best way to teach the game and refined that into what he eventually filmed. I’m assuming this took a few days, but we already know the results were impressive. Just because you have a live audience around your dining room table doesn’t mean you can’t use this same trick yourself. If you have buddies over to play a complex game, take a little time the day before to plan how you’ll lay out the rules so they can understand. If you spend half an hour planning your spiel, you can cut your teach time in half. More importantly, you can avoid drifting off topic and making things more complex than they have to be.

Remember that teaching a game is not just about getting the rules into new player’s heads. You’re also romancing them into wanting to commit to playing this game. In the case of Twilight Imperium, that’s an 8 hour commitment. If your explanation is confusing or boring or makes the game seem like a hassle, you can lose players right off the bat. Planning ahead can give you time to avoid these traps and prevent seeming lost yourself. If you’re asking friends to spend half a day on something, you should be willing to spend some time beforehand getting ready to bring them up to speed quickly and with minimal growing pains. 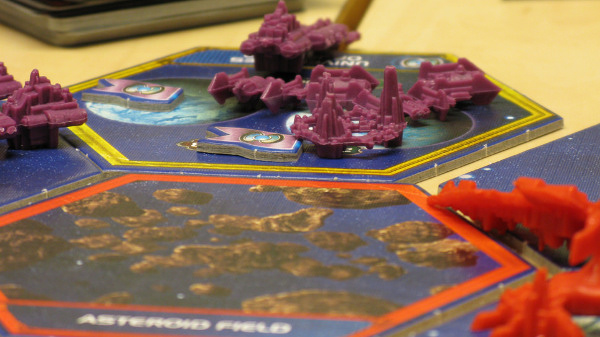 If you watch the RTFM video but already know your way around Twilight Imperium you’ll notice Shea explains the game out of order. He starts with tactical actions then moves backwards to choosing strategy cards then backwards again to explain building the board. But why? Sometimes the rules are best explained in what might called an intuitive order, even when that’s not the order the game is actually played in. Shea says it best when he mentions he’s leaving his explanation of board building (the first step in actual play) until the end of his video so that you’ll understand why placement is important. Once you’ve seen how the game actually plays, the seemingly innocuous galaxy building in the setup phase has a whole new meaning. Saving it until the end helps a new player contextualize what they will be doing, and context is key. When someone learning a game has context for the rules, they tend to remember them more and get overwhelmed less.

As they say… timing is everything.

3 – SET UP EXAMPLES WHEN POSSIBLE 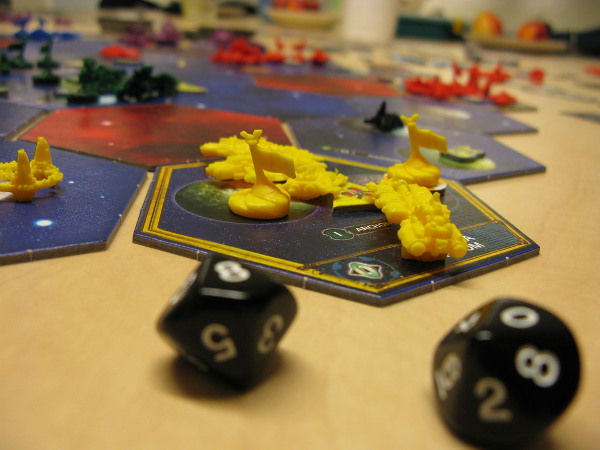 When teaching the game’s somewhat daunting space combat mechanics, Shea sets up a very specific and efficient example. He presents a space fight that, in one battle, includes every possible special ship rule as well as all the basics. So after a little over a minute, you’ve learned everything you need to know about space combat and have also seen it play out. Previous to this he set up the combat by explaining how all the ships moved to get where the battle took place, including explanations of why some ships couldn’t participate in the battle and why others could but it wasn’t strategically smart to do so. Using this specific example, he illustrated dozens of rules quickly and avoids the all-too-common cop-out of “We’ll explain ship combat when we first get to one in the game.”

When teaching a game, try to set up some complex circumstances that you can talk new players through. If you want to work as hard as Shea and the RTFM team, you can try to build a super example that somehow magically contains all the rules in one go. If you do, please post the specifics for your example and game in the comments! 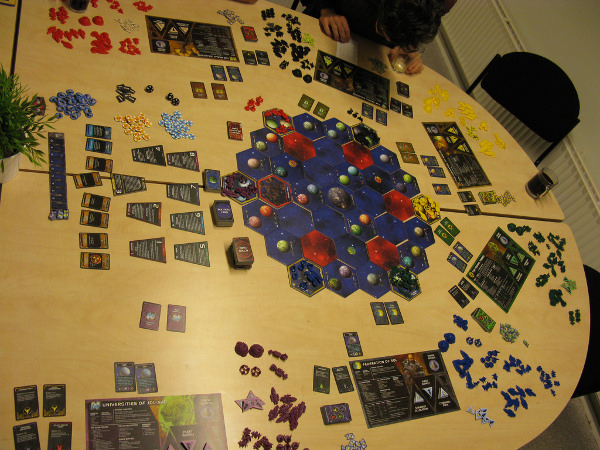 If you’ve played a game, you’re bound to have opinions and horror stories that you want to share. Be careful not to blend in so much of your own opinion that the rules take a back seat. In the entirety of the Twilight Imperium video, we only really hear about a minute of tips or opinions. New players can get overwhelmed if every one of your rules explanations comes with a lengthy mess of secondary information and personal examples. If you want to keep their attention, tell them how to play the game and then start playing it. 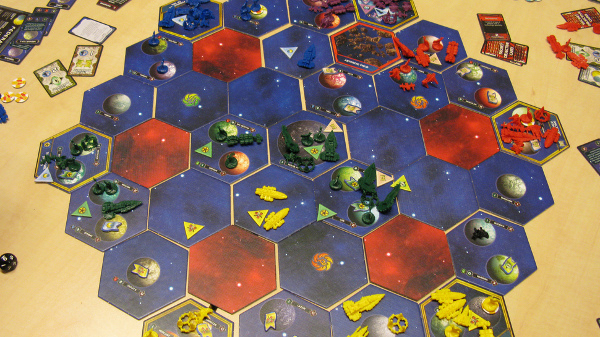 Once you have everything set to teach your favorite super complex game, remember that the world around the rules is just as important in its own way. Using the game’s story as a backbone of your explanations makes the rules more memorable. It’s much more exciting to conquer the ancient planet of Mecatol Rex to unlock the secrets of the previous galactic rulers, than it is to gain one victory point. It’s telling that while the RTFM review was trying to be as short as it possibly could be, it still found time to set up the context of the galactic struggle. Flavor is important folks.

Explaining the biggest and best games in the shortest and most efficient way is a skill, and one you’ll have to spend time perfecting. Trust me it’s worth it. The better you get at teaching games, the more folks you can bring to your next game night. Eventually you’ll reach a point where you can comfortably take your casual game friends into a serious gaming atmosphere without fear that things will go tragically wrong. Until then, it might be good to bring along a game like King of Tokyo with your deluxe multi-expansion copy of  Arkham Horror, just in case.

Thanks to RTFM and Shea Parker for being the inspiration for this article. You can see their channel here and follow RTFM on twitter here.

What tips do you have for teaching complex games? What do you advise against? Do you have any stories of players bailing after a failed explanation? Leave all your thoughts in the comments.