5 Olympic-Grade Animes Based on Sporting Events

From Hoosiers to Caddyshack and Vision Quest, the sports movie had a heck of a heyday in the 80s. Sadly though, like a lot of things that were awesome back then, the genre hasn’t ever quite recaptured its glory. At least in the US, anyway.

American otaku tend to focus on mecha and magical girls when discussing anime, but there’s in fact a thriving and eclectic niche of “sports entertainment” over in Japan. Basketball. Soccer. Tennis. Football. Even swimming. Name the game, and there’s very likely a show devoted to it. So, with the Rio Olympics at full gallop, what better time to recommend some titles rendering athletics with animation on a gold medal level? 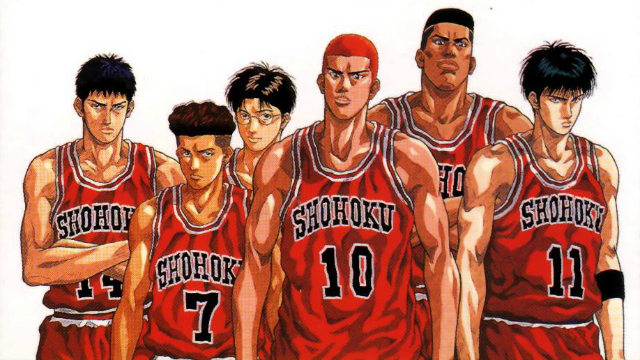 Think Rocky Balboa has a storied on-screen career? Pfft. Seven movies? That’s nothing compared to the 100+ episodes starring these ballers. Obviously, Slam Dunk‘s dynamic evolves a lot over all those installments, but the initial premise follows a delinquent gang member who joins his high school team to impress a girl. At first, he has little affinity for the actual sport–he’s just doing it for her–but he grows to love it as he bonds with other misfits on the court. And as you can plainly see, series creator Takehiko Inoue must be a colossal fan of the Jordan-era Chicago Bulls.

The Prince of Tennis 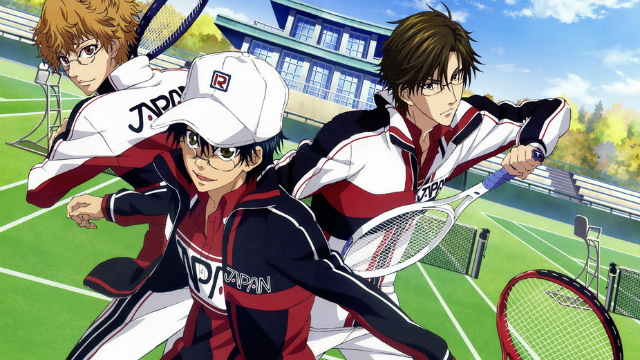 With even more episodes to its name than Slam Dunk, this show truly does feel like the epic saga its title portends. High school freshman Ryoma Echizen is such a prodigy with the racket, tennis might as well be a martial art in his hands. Indeed, as he levels up through a daunting gauntlet of matches, the young ace comes to master complex tennis techniques as if he’s learning the Kamehameha. Actually, while the “magic balls” in this series are made of yellow felt, the Dragon Ball comparison extends in a lot of other ways. The latest iteration, New Prince of Tennis, jumps Ryoma into a new era, much like DBZ time-skipped Goku. After conquering Japan, the prince starts back at the bottom on American courts–only to rise to the top of the brackets once again? 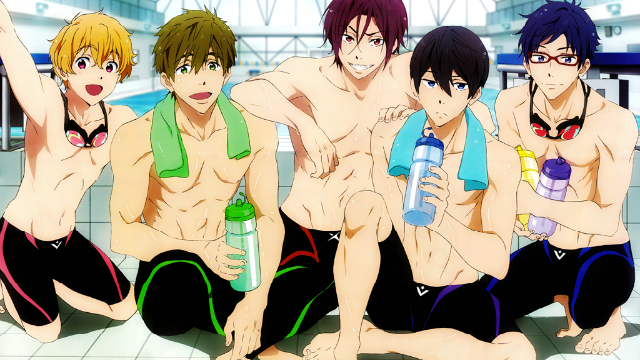 It’s no exaggeration to say this one is dripping with sex appeal. The cast of pretty boys spends a whole lot of the show shirtless, beside or inside pools. It’s not all lounging and posing, though. The show’s actually a pretty compelling exploration of rivalries, both friendly and official. The four leads are boyhood friends who’ve reunited after drifting apart for years, and their reunion stirs up old competitions. The drama doesn’t just revolve around who’s fastest, either. It’s about who wants a win more, and who trained the hardest for it. The show’s even proven so successful that Iwatobi, the real and lesser-known town Free! is set in, has actively used it attract tourists. 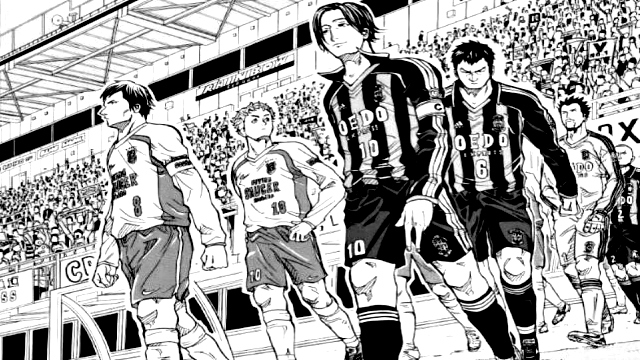 Think of the movie Major League, perhaps–but for soccer. This series follows East Tokyo United, a middling team in Japan’s top league whose fanbase is steadily trickling away. In a wild bid to flip the script, ETU’s owners hire the eccentric ex-star Tatsumi Takeshi as a coach. Having logged time in with British teams, Tatsumi specializes in “giant killing.” He can leverage lesser players and lower budgets against league elites. Now, while plenty of sports shows are about underdogs, the Major League comparison holds here because Tatsumi and his players are a highly cantankerous bunch. More so than any other title on this list, Giant Killing definitely isn’t about the get-along gang. 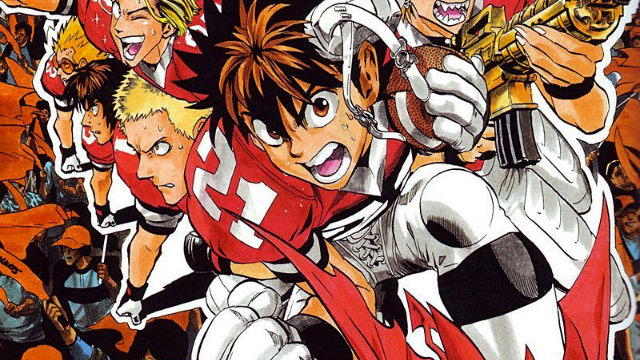 Gridiron might not have a big following in Japan, but this series has proven so successful, it may have actually raised the game’s profile over there. The title is in reference to the alter ego of the lead character, making it an odd combination sports and… superheroics? See, young Sena is a shy boy in the halls of his high school, but a magnificently-talented running back on the football field. He’s so damn good, in fact, that his team captain forces him to cover his face and play under the alias “Eyeshield 21,” lest rival teams poach him. A bit over-the-top, sure, but if you want grounded realism, go watch the Program.

What other sports anime have we missed here? Do they deserve some hollers from a stadium audience? Drop your recs in the talkback. We’d love to feature them here.