If you’re looking for high quality indie sci-fi comic books that are just getting started (1-3 issues published so far), read on. These titles all feature superb story-telling and impressive art, and each has a unique style fitting into a different sub-genre of science fiction. Every series below is a creator-owned project published by Image Comics. There’s enough great stuff here that sci-fi fans are sure to find something to enjoy. 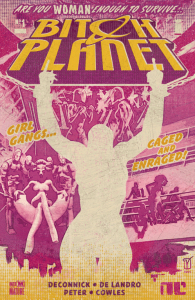 In a dystopian future, women who are deemed “non-compliant” are shipped to an off-world prison planet as punishment for not fitting into the tightly-defined rules and expectations of an earth starkly ruled by sexist men. Writer Kelly Sue DeConnick cleverly uses a seemingly exaggerated exploitation style to bring home truths about gender inequality in the real world we live in.

Each issue also has an essay on feminism at the end that rivals the high quality of the story preceding it. At turns emotionally touching and rage-inducing, each installment of Bitch Planet will leave you thinking about it’s implications well after you’ve turned the last page. 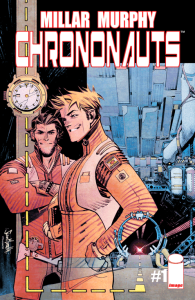 Two scientist bros attempt to be the first humans to travel back in time, with the whole world watching (à la the first moon landing). Mark Millar moves us through the first issue quickly, with some hints of the main characters’ back story and a cliff-hanger implying this story will be as much about the past as it is the sci-fi future. The art from Sean Gordon Murphy is sharp and detailed, in some panels communicating a lot with few, or no, words to aid the images.

Chrononauts is likely to compare well with other classics of the time-travel adventure genre, and it looks like it may also join them on the big screen: a day after the first issue came out, news broke that Universal Pictures has already optioned rights to the movie. 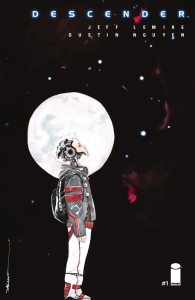 A group of strange machines launches devastating attacks on a system of advanced worlds. A boy android wakes up on a derelict mining colony after a 10 year slumber to find that all of the people have died. Writer Jeff Lemire connects these two events throughout his first two issues of Descender, slowly building suspense as he reveals bits of information about his main character. I’m hard-pressed to decide which I like more, the story or the the beautiful water color art by Dustin Nguyen it is told through. Expect to see more of Descender even if you don’t pick up the comic book: Sony acquired the film rights to the title before the first issue even hit the stands. 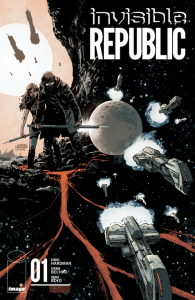 A reporter arrives on a planet that has just seen the collapse of it’s dictatorship, and discovers a journal from the ruler’s unheard of female cousin, telling the true story of how his reign started. Husband and wife team Gabriel Hardman and Corinna Bechko describe their series as about “revolution, the nature of power, who gets to record history and what that implies,” as well as “the influence of geography on politics, and how family, loyalty, and love can trip logic, even when empires are at stake.”

Sound ambitious enough? Hardman and Bechko really pull you into the world they’ve created and get you invested in the characters in the short space of a single issue. Expect this sci-fi political epic to deliver. 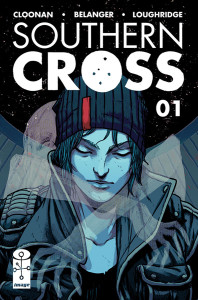 Alex Braith boards the spaceship Southern Cross, bound for Saturn’s moon Titan to recover the remains of her sister, who died in a mining accident. But she’s also looking for answers about how exactly her sister perished and why. In this book, Becky Cloonan has written a horror/mystery of the first order, using a large spaceship as her setting, with no shortage of shady supporting characters to keep things interesting. Andy Belanger’s art is the kind you really want to pay attention to – not because things won’t make sense if you don’t notice the details, but because you get so much more out of the book if you do.

Have you already checked any of these out? What did you think? What new indie sci-fi comics do you think we missed? Are there any sci-fi classics you’d like to see get some love in a future post?