A brilliant game can come from anywhere. Hasbro Gaming Lab teamed up with Indiegogo to search for the next great one with Hasbro’s Next Great Game Challenge. A panel of judges reviewed over 500 game submissions and narrowed down the finalists to the top five. You have the chance to help these games go from concept to reality by supporting their Indiegogo campaigns now through December 1. The grand prize winner will receive $10,000 and a trip to Hasbro for mentoring and assistance. 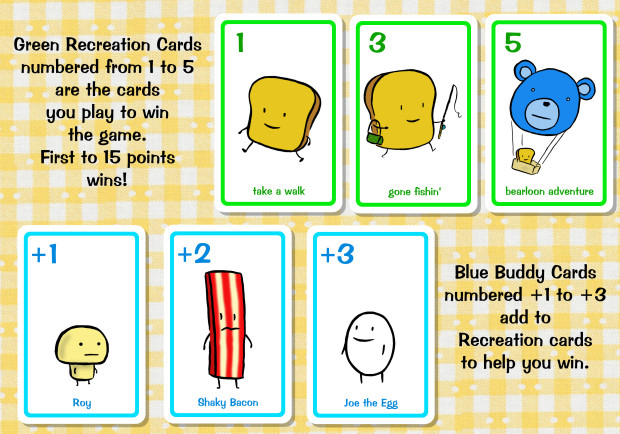 Irresponsibility is a family-friendly card game for 2-4 players. The goal is rack up 15 points of happiness by playing cards to make Mr Toast have fun. Players can add activities or buddies to increase their own score, or play Responsibility cards against opponents to make him sadder. Action cards also allow players draw more cards, play extra cards, or even take over another player’s position.

Hexes is another card game that starts off simple, but gets progressively harder. The goal of the game is to hex other players with rules they must follow. If they break a rule, they’re out of the game. Last player standing wins. In each round, a player draws a hex card, places it faced down on the table, and assigns it to a player. That victim can use a defense card to deflect the hex to someone else. Then that person has the chance to defend. When a player can no longer defend, or accepts the hex, they must follow the rule on the card until the end of the game. The hexes are all very silly. For example, the “Affluenza” card requires the hexed player to address all other players as “Chad” or “Tiffany.” 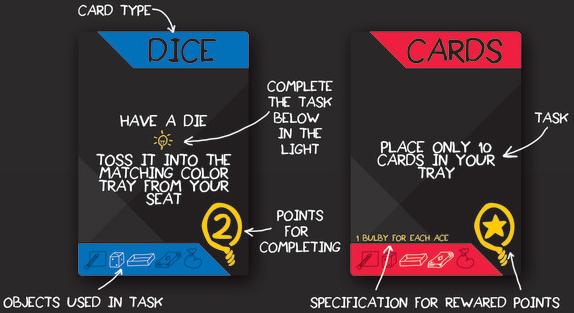 Touchy Feely is the first party game you play in the dark. According to the game creators, the darker, the better.  Each player draws five task cards per round, and selects three to keep. Then, the lights are turned out and the players must attempt to complete as many tasks as possible in the dark. Only the “light keeper” knows how long each round will last, and players must somehow prove they have completed their task. The more difficult the task, the more points the player receives for completion. After each round with a player being the light keeper, the game is over. Whoever has the most points wins.

The concept behind SUNK! is quite simple. Pour water into a floating cup and try not to sink it. Easy enough. Now try pouring a single drop while hopping up and down on one leg, or three drops with your weaker hand. Not so easy anymore, now is it? Each player rolls a die to determine if they must play a challenge card or pass the turn to another. The challenge cards determine how much water to pour while doing what activity. When the cup sinks, whichever player poured last is out.

Warning Signs is a game of misinterpretation, almost a cross between Balderdash and Cards Against Humanity. The dealer chooses two cards. The first is a location, such as an aquarium. The second card is a wordless symbol that might appear on a sign. The other players then write down their interpretation of what the sign could mean at that location. The dealer determines the round winner by which “misinterpretation” is the funniest.

Interested in these games? Make sure that you visit the Hasbro Gaming Lab Indiegogo page to check out all the games and lend some support to the ones you like. Remember, that these games won’t get made without your help. With your support and Hasbro, we will be able to turn some dreams into cardboard reality.

Do you have a favorite game from the campaign? Do you have a board game dream that you’re dying to turn into reality? Let us know in the comment section down below.