3 Steps To Creating a Magic: The Gathering Modern Deck - Nerdist

Getting into Magic: The Gathering can be daunting, but worry not! The extended formats tend to have a lot of life compared to the ever moving engine that is Standard. Let’s take a look and then look at a theoretical deck as it progresses through some completely arbitrary tiers.

The easiest way to play Magic: The Gathering is to play Standard. It definitely requires you to keep up with current sets, but that’s about as much thought required to keep up. Next would likely be Commander because you don’t need big money cards, but it’s a matter of finding a good playgroup as with any game. You could also dip into Vintage and Legacy, but that’s big dollar investment right there.

Finally, we can look at Modern which can be pricey, but secondary card market values tend to be more stable once cards rotate out of Standard. To show you the process of how to build a Modern deck on a budget, we’ll build one together. Before we get started, you may want to check out this article and this video from How to Play on the basics of deck building, as we’ll be building on concepts from that article.

There are some “jargon”-y definitions, but I have done my best to define them early so that when they come up again you’re properly equipped.

Start with A Concept Deck

I was grateful to be talking about “dojo”-ing a friend’s deck, where we were taking a look at said deck and figuring out how to improve at the most basic of levels. He had this really sweet Dinosaur tribal deck out of the Ixalan block that finally snapped together my thoughts for this process! Like building a computer, we can look at tons price options to get us where we need to go, but having an idea of what you want your deck will do will give you a starting point for your deck.

Be forewarned: if you’re looking to build a deck from scratch, the secondary market can be super expensive! As we move forward, the goal here is to look at card alternatives that are far cheaper as we progress to a reasonably competitive modern deck by the end. This process is exactly how I begin building decks and tightening them up to the level of play and cost I want to achieve. Here’s my starting point for a deck:

The point of this theoretical deck is to get big, smashy dinosaurs out as quickly as possible. The dinos we have to do that are Gigantosaurus and Gishath, Sun’s Avatar. 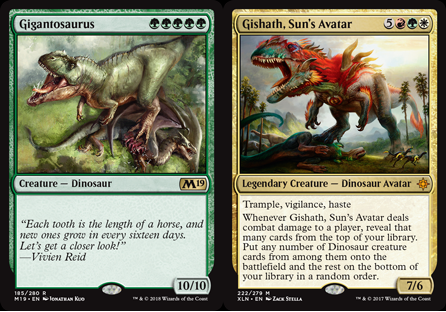 When pricing out these cards at the time of writing this article, almost every card was 2 dollars or less. The only exceptions were the Giganotosaurus and the Gishaths. Gishath, by the same criteria, lets us have a big bomb that can pull other cards out of the deck to be a real threat when played.

Finally, for instants and sorceries we have 8 removal spells in the forms of Lightning Strike and Shock. It is always a good idea to have 4 removal cards in my opinion. They are there to help us set the tempo to our own pace and get rid of creatures if needed or get that extra bit of damage in to win. Commune with Dinosaurs helps us get more dinosaurs or lands into play.

At this stage, we’re looking to get better value out of the cards we’re playing. That may mean changing a card out of the deck with another card that does the same thing but better or for a cheaper mana cost. We’ve also taken the time to select a better base of lands for our deck so that we can more efficiently get to the cards that matter.

Now that we have a general idea of what we want our deck to do, here’s where we start to adjust our lands a little bit and adjust the spells that help us deal with our opponent’s threats. Here’s what we did:

These are the kinds of things we’re looking to do. Just improve slightly, step by step, with cards that are just better.

We also cut the Giganotosaurus’ which is a little counter-intuitive to our main plan about being smashy, but we have some staying power and the 5 Green cost was really steep. So, a little bit of an odd place, but we’re transitioning so that’s okay.

So we splurged a bit on lands instead. Those new Temple Gardens and Stomping Grounds are what are called Shock Lands. They enter tapped unless you lose 2 life. They also count as a Plains and Forest, for example, with Temple Gardens. These are particularly useful when paired with what are called Fetch Lands. Fetch Lands don’t provide mana on their own, but can be sacrificed at the cost of 1 life to search for some kind of land. They specify something like Plains or Forest which, in the case of the Shock Land noted, could be fetched or you could get the Stomping Ground if it notes Forest. 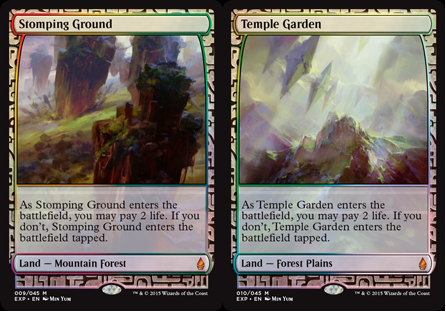 You may also note that we’re at 57 cards here. That’s mostly because those 3 cards could be anything depending on how much you want to spend. I’d add more creatures, but you could add whatever makes you the happiest. For some decks, I like to have a lot more removal cards But it is intentional.

At this stage, we’ve tightened up our lands even more. We’ve also taken the time to put big threats back into the deck and looked to ensure that the deck has maintained its synergy and purpose.

So, in this final iteration, we scrap more of our basic lands for a few of those fetch lands. The purpose of this to help speed the deck up even more. We’ve cut the Commune with Dinosaurs because we should be drawing them regularly.

Digging a bit is nice, but you can consider fetch lands basically null cards for your consideration. Once you play them, you are using them to get other lands out of your deck. We can effectively consider this deck to have 18 lands. The less land you’re effectively playing with for your deck means you get to play cards that matter more often.

We have also added Carnage Tyrants and Zacama, Primal Calamity. Look at those sweet disasters. They’re gonna rough some stuff up, and can realistically get out super quick thanks to our Callers and Huntmasters reducing dinosaur cost. 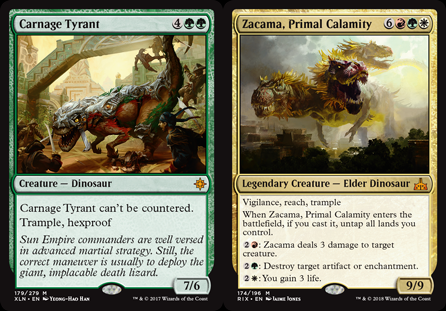 These are our big bombs at this point. We should be doing pretty well and honestly, we could cut the Ranging Raptors or cut back to 1-2 of them because we only have 6 basic lands now.

We just walked through 3 sort of stages of deck building: concept, refinement, and polish.  I know I didn’t talk direct prices, but each step up definitely costs a bit more than the last. The goal was to keep the cost down throughout the process to give a reasonable approach in regards to price. Modern decks can be pricey, but you’ll use a lot of those cards in other decks you eventually end up making. Your lands will inevitably be the most costly. In Modern, your land base is going to be pretty expensive, but they’ll be usable for any other modern decks you make.

This deck is by no means ideal nor the best deck it could be, but it kind of shows the process of taking a deck that was effectively built in the Standard format and brought deeper into a Modern playground. You can use this kind of process for any decks you’re building. You’re really only limited by your imagination, luck, and your wallet if you so choose.

What are the best tips for budget-friendly deckbuilding in Magic: The Gathering? Tell us in the comments!