3 Reasons You Need to Play A Dungeon Crawl Miniature Game

There’s a world of games out there that bridge the gap between tabletop RPGs and traditional board games. It all begins with a faint patter of water droplets popping against weathered flagstones. A flash of steel amid torchlight, coating the dirt walls like Jackson Pollock experimenting with crimson. The table top dungeon crawler has an allure proportional to its component footprint.

Ever since that little game HeroQuest shook the earth, sporting 3D tables and bookshelves, our lives have tipped ever so slightly. Miniature giant, Games Workshop, even dove back into the ironclad scrum releasing a new version of their extolled classic Warhammer Quest after ignoring the property for decades. It’s a niche of game that is still rocking it like an opening band hungry for more, yet experienced and wise like a headliner on a reunion tour.

Dungeon crawlers possess a level of excitement that feverishly grabs a hold of our attention like a bear-trap coated in honey. What’s so great about this group of games that infects the soul and leaves us hungry for more?

Exploration is not a universal aspect of this type of design, but it is certainly one of the most interesting. Gamers of all ilk love to explore. We dive into new mechanisms, themes, and gloom-struck tunnels full of spiders and misery.

Claustrophobia is the poster child for this trait. This two player head-to-head thriller features forsaken criminals exploring the underground tunnels of New Jerusalem as they beat back the forces of hell and even invade their realm. It’s a post-Crusades fantasy hack and slash with a brilliant dice activation system and a really clean layout. 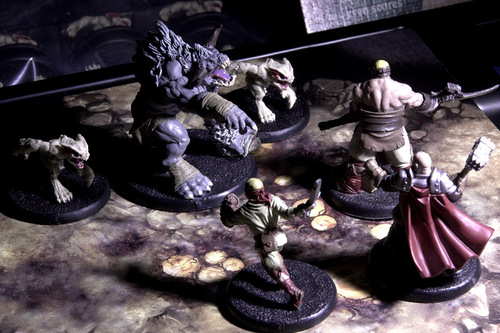 The map is one of the most intriguing elements as it organically grows and shifts over the course of play. A wide variety of room effects and encounters keeps the dish spicy and your focus on point. The ease of play really fuels the delve as it never bogs down and always keeps you moving forward and peeking around that next corner.

Pairing well with exploration is that roleplaying game derived ownership of character. You have a single identity that you must advocate for in this cruel underground world. The pain of each blow and joy of each discovered piece of loot shakes through that avatar like a lightning rod to your gut.

By developing the protagonist with a healthy amount of detail and customization, it all becomes personal. Shadows of Brimstone nails that sense of identity by presenting a nuanced character advancement system that gains buy-in by presenting interesting choices. These decisions have permanent game defining consequences that feed back through and define your character’s narrative and mechanical choices. 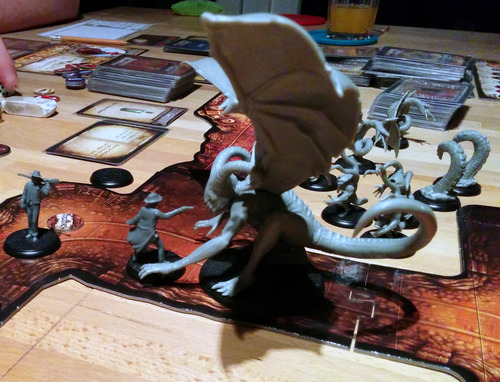 The final thread that binds these elements together is engaging challenge. This typically is focused through a nuanced combat system as we see in the popular Descent: Journeys In The Dark. This game has triumphed through two editions and countless print runs, its success fueled by a multi-colored dice-based combat system that sings.

By utilizing an asymmetrical spread of six-siders the design is able to model varying capabilities and prowess. It provides for a tidy representation of a multitude of weapon types while achieving consistency and a uniquely smooth personality. It’s stuck with the game through multiple iterations and stretches as far back as its fantastic predecessor, Doom: The Board Game.

The dungeon crawler’s mug is colorful and multi-faceted. Anyone can take a long gander and identify with a part of its makeup. While many posit that this is a golden age of board gaming, it’s readily apparent that this notion extends to the subterranean caverns of forgotten civilizations and malevolent apparitions. We love them and we can’t get enough.

Why do you play dungeon crawlers? What are some of your favorites? Tell us in the comments below!