During pumpkin season, you can find pumpkins doing all kinds of things. They appear in coffee, of course, and in pumpkin ramen, pumpkin margaritas, and all manner of treats. They get carved into glowing jack-o’-lanterns that awe us all. Even the elephants delight in a pumpkin treat. So here comes one more thing to add to your Halloween season (or any season) list of pumpkin awesome, a giant pumpkin doing a cannonball as it gets dropped 100 feet into the pool. The action itself happens at about the 1:25 mark in the video.

Yes, free and clear of any special effects, this pumpkin delivers quite a splash. More than a splash. This pumpkin brings the whole tidal wave.

The video’s description explains more about this momentous dive:

Bauman’s Giant Pumpkin Drop is pretty much exactly what it sounds like: taking a cast-off giant pumpkin, hoisting it 100 feet in the air with a crane, and dropping it into an inflatable pool.

Right to the point! But some things don’t need any thrills to create extraordinary outcomes. This pumpkin was actually grown for Bauman Harvest Festival’s Giant Pumpkin Weigh-Off. But, unfortunately, this pumpkin “developed a hole during its growth. It began to rot and wouldn’t be able to be entered in the festival’s Giant Pumpkin Weigh-Off, which lead it down a different path, one equal parts spectacular and brief.” 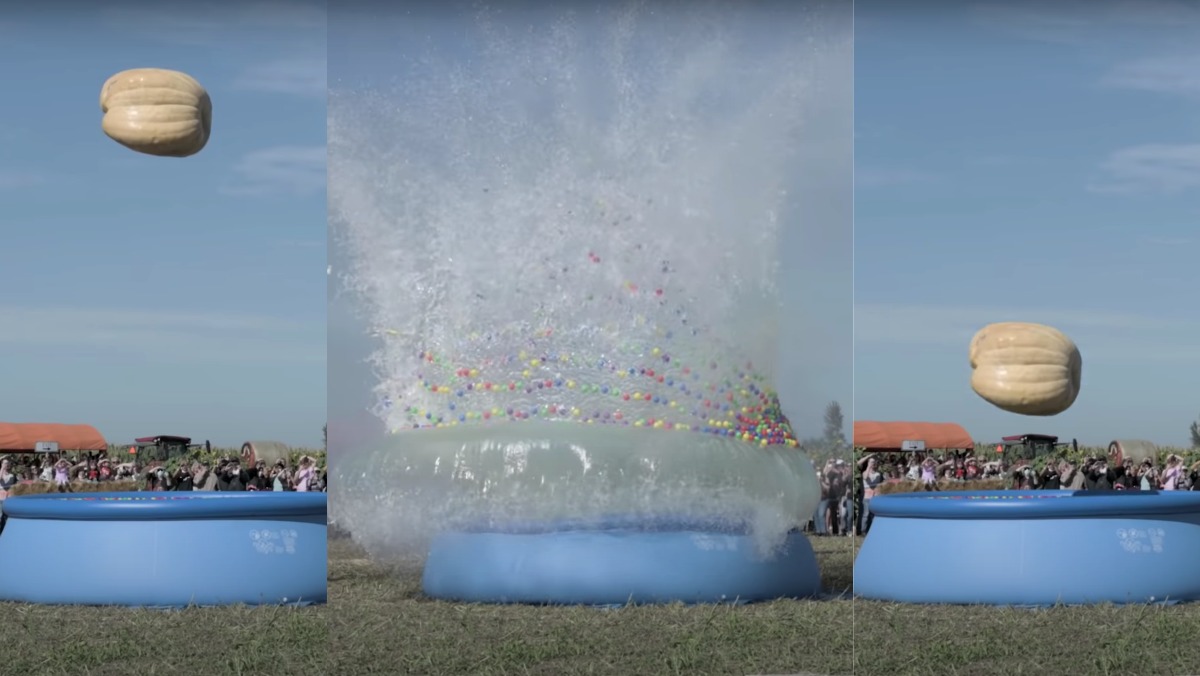 Indeed, this 1,200-pound pumpkin saw a glorious end. And its spirit will live on forever and on loop as we watch this video over and over again. Seriously, we can’t stop watching. Pumpkins don’t tend to fly every day. That’s usually a witch’s role. So we definitely treasure getting to see this pumpkin’s take on it. And as mentioned, the results are epic. It looks like the pumpkin sets off a miniature explosion. It even audibly connects with the water. Thud.

Don’t let the Green Goblin get his hands on this pumpkin. It would make the Sinister Six unstoppable if he did. And then what would we do? We’d need a super-sized spider to beat that. So while the showdown would look just right for the season, we think we can pass on it for now.

For the curious, Bauman Harvest Festival takes place at Bauman Farms, located in Gervais, Oregon. The festival features many other excellent fall activities. Some of which include even more pumpkin fun. But probably nothing else as intense as the pumpkin drop.

All in all… Watch out for falling pumpkins. That feels like the true takeaway of all of this to us. Especially around Halloween when pumpkins have the most power.