10 Great Games to Play on Your Travels This Summer

The late, great Anthony Bourdain once said, “Travel isn’t always pretty. It isn’t always comfortable. Sometimes it hurts, it even breaks your heart. But that’s okay. The journey changes you; it should change you. … You take something with you. Hopefully, you leave something good behind.”

For those of us with an ever-present case of wanderlust, it’s not always possible to get away to see the world. Thankfully, even if we can’t afford to hop on the next plane out of our hometown, we can take a trip to our nearest tabletop for a chance to see lands both near and far away.

Check out these 10 games set in various locales that can be a satisfying way of evoking memories of past trips or inspiring your next adventure.

Going across the Atlantic might not be feasible during the typical spring break, but anyone can feel like they’ve visited the City of Lights after playing a game of Paris Connection. This introductory level train game is a slight step up from Ticket to Ride, with players manipulating the stock market through careful train placement. The game does have colorblind accessibility flaws, but I wrote about how a simple hack can make the game playable for those with vision issues. 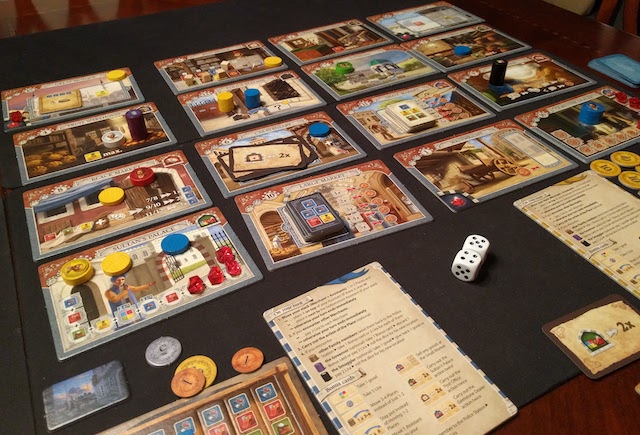 This pick-up-and-deliver game set in a bustling Turkish bazaar is fun for the whole family. Contributor GeekInsight wrote about the variability in  Istanbul: “[B]ecause the board is modular, you can set it up randomly and look for new routes toward victory. Sometimes, exchanging goods for rubies will be the best option. Other times, you’ll want to buy them with coins. And the game is self-balancing – the more popular avenue toward rubies generally becomes more expensive quickly.” 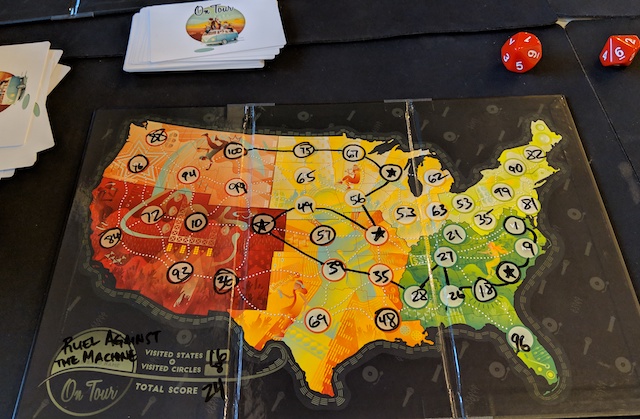 What better way to see the United States than as part of a touring band? Whether you’re the latest hip hop, country, or rock band to make it big, you’ll need to keep your wits about you as you attempt to navigate the U.S. via dice rolls and clever planning. This roll-and-write eliminates paper waste by providing players with their own laminated board and dry erase pens. Roll the two 10-sided dice and try to connect numbers in sequential order. The more cities you visit, the higher your score.


The tile-laying mechanism in Carcassonne continues to influence designers today. In this classic game, players draw land tiles and build the southern side of France, creating castles, roads, and fields where they may place their meeples for point-scoring opportunities. Watch Becca Scott and friends play Carcassonne on Game the Game above! 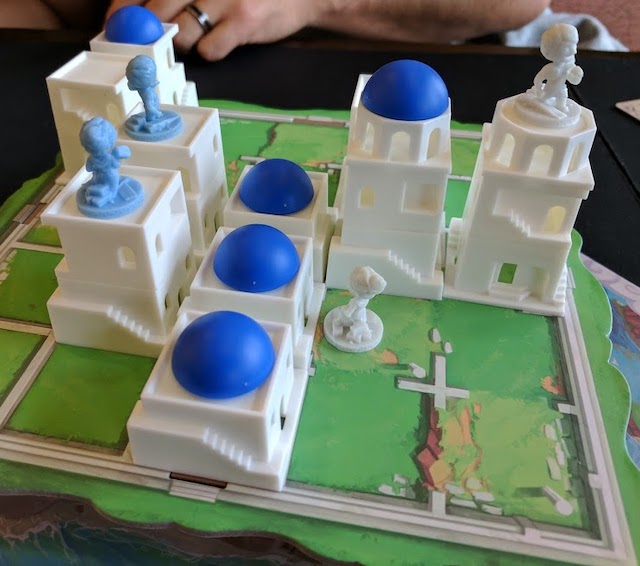 Journey to the Mediterranean, where the beautiful city of Santorini beckons. You and your opponent take on the roles of Greek gods building the blue-and-white city of Santorini. An abstract game at its heart, Santorini’s chunky plastic pieces and smooth yet challenging game play provide loads of entertainment. Games of  Santorini last about 15 minutes and with dozens of gods to choose from, you’ll have a ton of replayability. 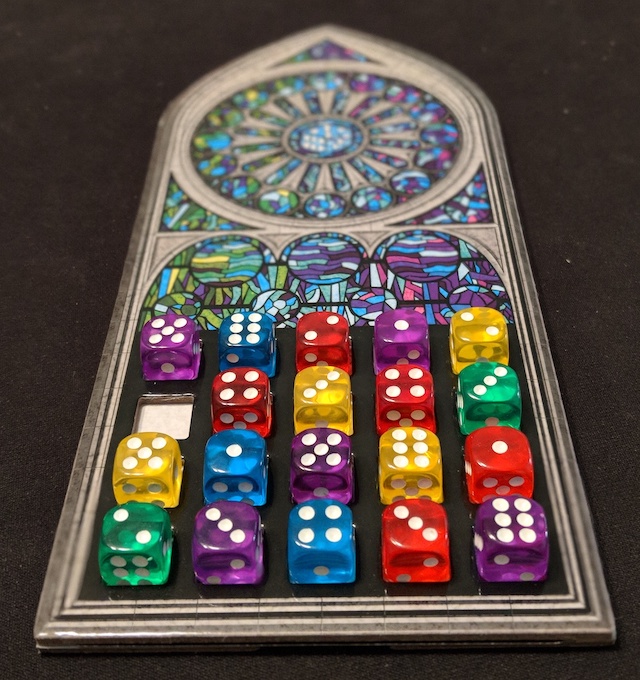 Located in Barcelona, Spain, the gorgeous yet unfinished Sagrada Familia church was the inspiration for Sagrada, a dice-drafting, sudoku-like puzzle for 1-4 players. I wrote about the game as part of our Best in Tabletop 2017 list, “there’s no denying the elegant brilliance of Sagrada. There’s a quiet satisfaction after every game and it’s easy to imagine your vibrant dice-filled board as a stained glass window masterpiece.”

The Castles of Burgundy 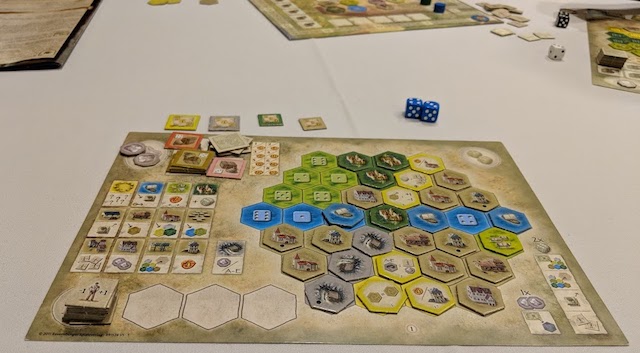 Even eight years after its release, The Castles of Burgundy remains ranked in the top 20 of Board Game Geek’s all-time greatest board games. Geek & Sundry’s Sax Carr wrote about this Stefan Feld masterpiece, “Each player is trying to build the greatest French Princedom by grabbing the right combination of tiles from the central supply. The twist is that you can only grab tiles (or place them in your castle) by rolling the corresponding number on one of your two dice. This means you often have to make the best of what you can take.” 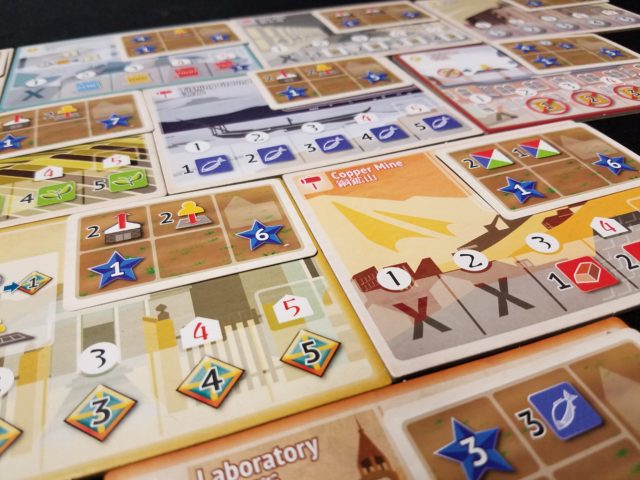 You’re a merchant during the beginning of the Meiji era, attempting to gain fame through shrewd trading. You’ll also be in charge of upgrading the city’s technology and expanding its culture. Contributor GeekInsight wrote about Yokohama, “For the Eurogamer who loves maximization, efficiency, and reasonable play time, Yokahama is a hard one to beat.” 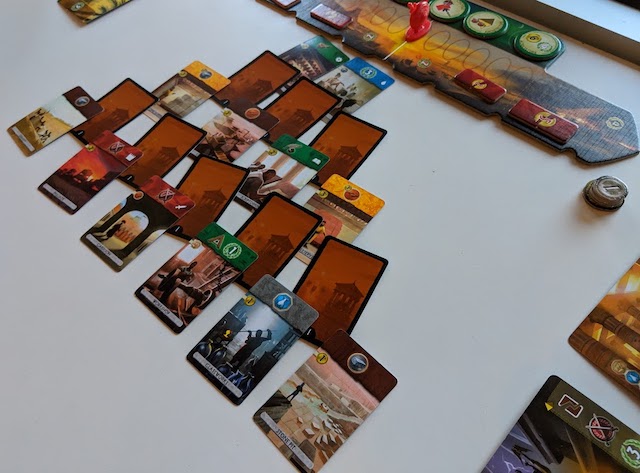 Travel back in time to see the rise of civilization’s buildings and wonders, from the pyramids in Egypt to the Temple of Artemis. Using card-drafting and set-collection mechanisms similar to the original game, 7 Wonders Duel is arguably the better game as well as one of the best two-player games available today. 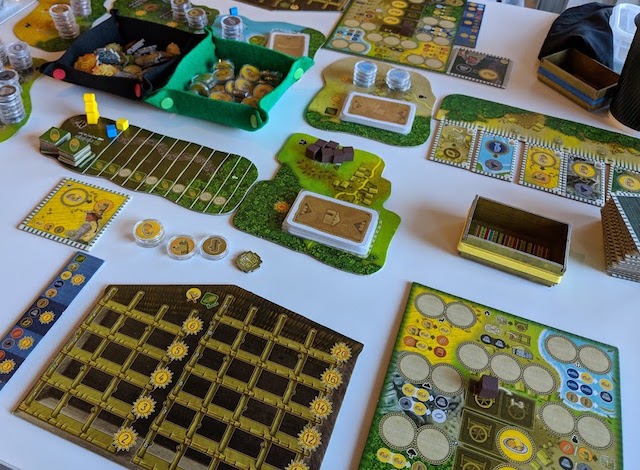 The spiritual successor to the highly regarded Orleans, Altiplano is a bag builder with asymmetrical player powers set in the South American highlands of the Andean Mountains. Players move to various locations to acquire resources, hoping to trade them in for more valuable goods and store them in their warehouse for victory points. The first-player alpaca marker is worth the price of admission alone.